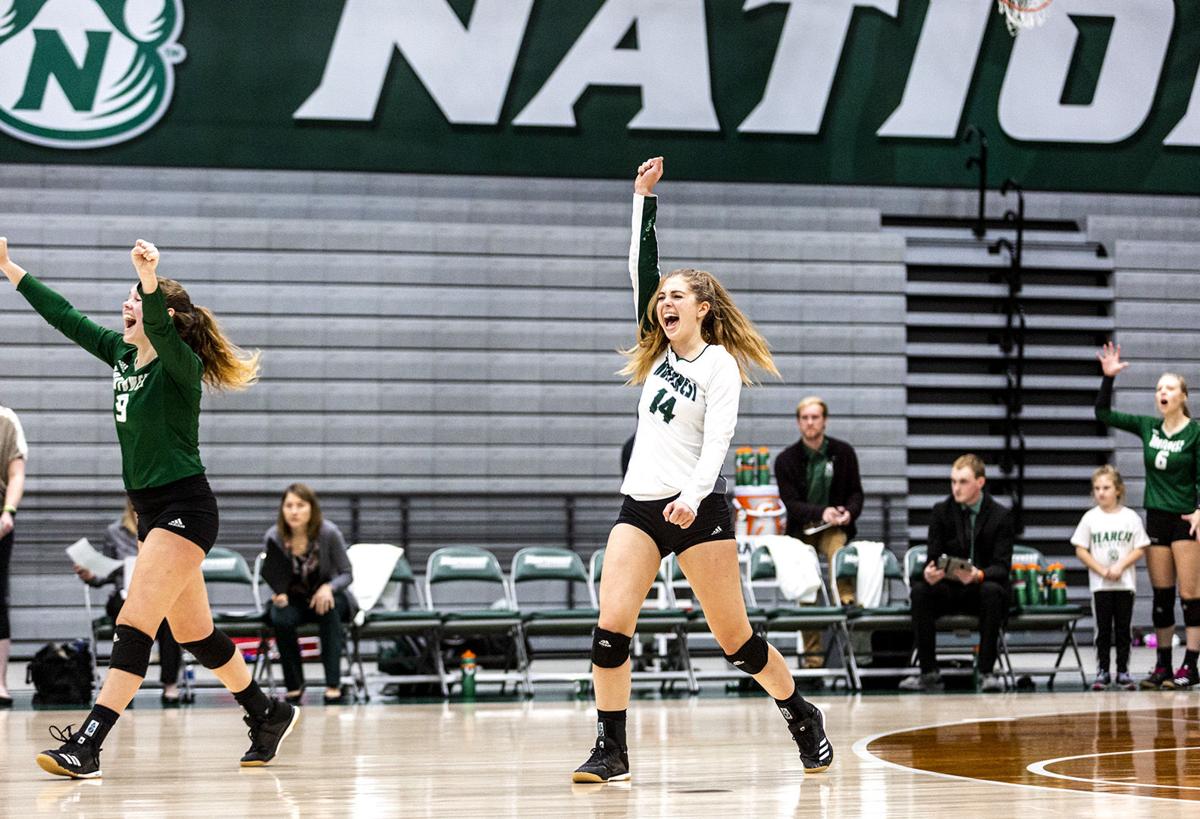 Sophomore libero Hannah Koechl celebrates in Northwest's final regular season game and 3-0 sweep against Emporia State Nov. 16 in Bearcat Arena. The Bearcats earned the No. 4 seed in the MIAA Volleyball Championship and are set to play Missouri Western, ranked fifth, Nov. 21 in the Hy-Vee Arena in Kansas City, Missouri. 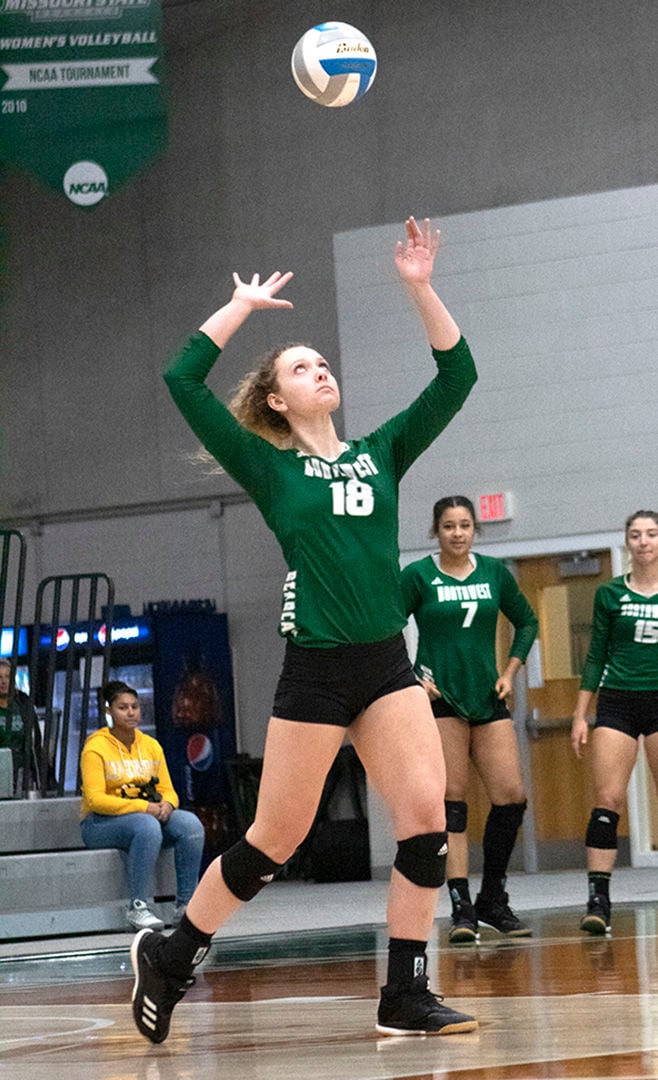 Sophomore libero Hannah Koechl celebrates in Northwest's final regular season game and 3-0 sweep against Emporia State Nov. 16 in Bearcat Arena. The Bearcats earned the No. 4 seed in the MIAA Volleyball Championship and are set to play Missouri Western, ranked fifth, Nov. 21 in the Hy-Vee Arena in Kansas City, Missouri.

Northwest volleyball closed the door to the regular season Nov. 15-16, as the Bearcats battled against No. 3 Washburn and Emporia State.

Northwest returned to Bearcat Arena Nov. 15 after playing on the road the past four games. The confident Ichabods (26-2) carried an impressive 11-game win streak into Maryville and looked to establish the season sweep.

Although Northwest was playing in front of a thundering Northwest crowd, Washburn kept its composure and built its own momentum. The Ichabods hit .215 through the match and sided out at or over 60% in each set.

The problem for the Bearcats, coach Amy Woerth said, was that that they struggled to gain momentum against one of the best teams in the country.

“I thought Washburn had the right energy and focus on getting the next point,” Woerth said. “They got the momentum going and from that stance, we struggled to respond. They just overwhelmed us.”

The Bearcats kept their fighting mentality in check as they kept the score close in sets. The back and forth match saw 36 ties and 18 lead changes. However, Northwest never gained the upper hand and the ’Cats lost by set scores of 25-20, 25-15 and 27-25.

The game led to junior setter Maddy Ahrens leaping over the 1,000-assist mark this season. She settled at 1,015 assists and will look to increase the total in the MIAA tournament.

Offensively, Northwest was able to move the ball around as freshman setter Alyssa Rezac tallied a team-best 43 assists. The ability to set teammates up allowed for an offensive onslaught. Junior outside hitter Hallie Sidney led with 15 kills, and junior middle blocker Morgan Lewis had 13 kills. The Bearcats hit .203 for the game.

“I just thought we were efficient and did our jobs. We worked well together as a team,” Woerth said. “We were more efficient in getting kills and doing it at a higher rate.”

Woerth placed the praise not on herself or her staff but on the players.

“It’s a testament to the commitment our girls take under from their responsibilities,” Woerth said. “They’re back here in July and do that on their own. They put a lot of hard work into it.”

Sidney was pleased to be a part of the turning point in Northwest volleyball.

“I think it’s cool that it’s something we’ve accomplished; it’s definitely something to be proud of,” Sidney said. “It’s really cool for the seniors as they’ve been a part of 20-win seasons three of their four years.”

Northwest earned the No. 4 seed in the 2019 MIAA tournament and will be matched against the No. 5-seed Missouri Western at 7:30 p.m Nov. 21 at Hy-Vee Arena in Kansas City, Missouri.

While Northwest is entering the tournament as the higher seed, they cannot overlook the recent success of the Griffons in the MIAA tournament. Missouri Western will try to push to the championship round for the second time since 2017.

“We’re going to have to play someone, and every single person wants to advance to the championship,” Woerth said. “Missouri Western is the name of the school we’re playing. We all know we’re in the same boat, and we all want to do the same things. It needs to be decided on the court instead of worrying about all the things you can’t control.”

The first round of the MIAA has not been nice to the Bearcats, as they have not been able to advance in the tournament in the past decade. Woerth is stressing the importance of teamwork to propel this team into the second round.

“It comes down to you wanting it. You have to come together as a team and put together a good performance,” Woerth said. “It’s not about luck, it’s not about what you eat, it’s not about the things that go with it, it’s about when the first whistle is blown what are we going to do as a team?”

If everything goes as the team has planned, Northwest would face the winner of the matchup between No. 1 seed Nebraska-Kearney and No. 8 seed Missouri Southern Nov. 22. Northwest lost both matches against Nebraska-Kearney in four sets this season. The Bearcats won both matches against Missouri Southern in three sets this season.

Sidney and the rest of the Bearcats are excited for their opportunity to prove their dominance.

“We’re excited as it’s our first year being able to play at a neutral site like Kansas City,” Sidney said. “It’ll be a fun experience. It’s important to enjoy a moment like this with your teammates.”