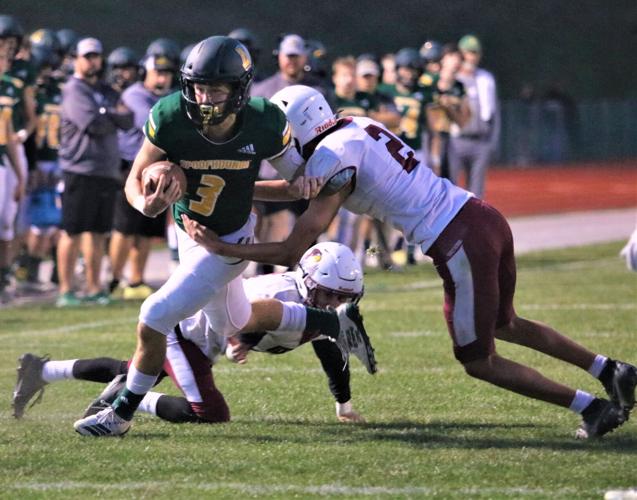 Maryville senior running back Caden Stoecklein breaks a tackle from a Benton defender during the teams' meeting Sept. 30. The Spoofhounds scored eight touchdowns en route to a 55-13 win over the Cardinals. 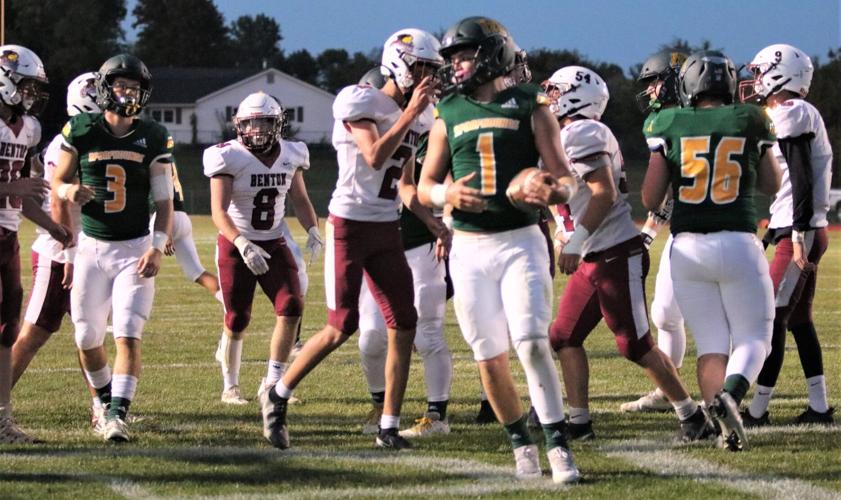 Cooper Loe walks in the end zone after taking it in for his second of three touchdowns for Maryville football. Loe's efforts helped give the Spoofhounds a 55-13 Homecoming win over the Cardinals Sept. 30. 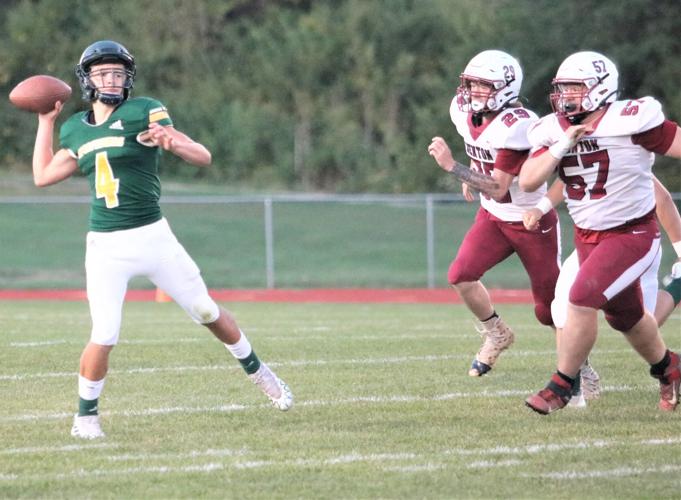 Maryville football junior quarterback Derek Quinlin prepares to throw the ball during the Spoofhounds' 55-13 win over Benton. Quinlin threw for three touchdown passes against the Cardinals.

After coach Matt Webb finished meeting with his team on the northeast corner of the field inside the ’Hound Pound, the players dispersed throughout the field and the stands.

Some of the players talked to their parents, some took group pictures and some went back to the locker room to change out of their now-dirtied green and gold uniforms. While the activities after the game looked different for some of the players, the contest ended the same for all 66 of them — with a Maryville football win over Midland Empire Conference foe Benton 55-13 Sept. 30.

As the lights began to turn off around the stadium, Webb said it was a big win for the Spoofhounds.

The Spoofhounds were under the brightest of lights as the game served as the finale for the week-long festivities of Maryville’s Homecoming. The seats were full of the Maryville faithful sporting their school’s green and gold colors, students in the student section yelling in excitement and Northwest football players who wanted to see the other football team within city limits.

Regardless of the amount of fans, the festivities before, the crowning of the king and queen, or the Homecoming theme — this year’s being “The Four Seasons” — Webb’s Spoofhounds have found a way to win on Homecoming. Since the Maryville native took over the program in 2011, Maryville (4-2) has only lost one Homecoming game. That same consistency continued with the win over the Cardinals (3-3).

“It’s been a fun week,” Webb said. “I think the students had a great time. It was a great Homecoming week. To top it off with a win at home in a football game, I think it’s great.”

Despite the 42-point triumph, Maryville was not in the driver’s seat for all 48 minutes.

On the Cardinals’ first drive of the game, sophomore quarterback Jaxson Rich set himself up under-center at his team’s own 48-yard line. Rich dropped back into the pocket, scanning the field for open receivers seemingly caught in a sea of green and gold from the Spoofhounds’ defense. The sophomore moved around to buy time, which eventually paid off.

Rich found senior wide receiver Devon Hoffman open near the easternmost sideline. The two Cardinals connected on the lob pass, and Hoffman broke away on the sideline for the 52-yard score. The touchdown put Benton up 7-0 with still 9:10 remaining in the first quarter.

Even with the opposition in ownership of the lead, Maryville senior linebacker — and 2022 Homecoming King — Macen Shurvington said he wasn’t too worried.

“You never wanna give up points, especially when you’re trying to win games and district seeding,” Shurvington said. “But, with defense it’s just more of a rhythm thing. So, personally, I’m not necessarily upset we gave up a long pass on the first drive of the game because we’re just settling in, and that’s what defense is about.”

Shurvington’s explanation proved to be true, as the Spoofhounds went on to score 55 unanswered points after the Cardinals’ went up 7-0.

Junior quarterback Derek Quinlin helped propel the team to the 42-point onslaught. The junior threw three touchdown passes — each to a different teammate.

“It’s awesome, because we’ve worked on it since summer,” Quinlin said about his team’s chemistry. “It’s just getting better and better every week. I got a great, great group around me.”

While Quinlin was able to have a big day through the air, the rushing attack of the Spoofhounds accounted for five touchdowns against the Cardinals.

Senior fullback Cooper Loe scored three of the five touchdowns, senior running back Drew Burns scored another from six yards out and sophomore running back Creason Canon gave the Spoofhounds their final score of the game with a 19-yard carry.

“We got a bunch of dudes who can run the ball, and I just happened to be the one carrying it. It was blocked perfectly for me and I read my holes,” Burns said.

The Cardinals managed to score a touchdown as time expired to end the 42-point run by the Spoofhounds as Maryville secured its third conference win. The 55-point output is the highest total in a game this season for the ’Hounds, and it marks the fifth time the team has scored over 40 points.

Maryville Homecoming came to a close in the ’Hound Pound, but so did the Spoofhounds’ home schedule for the 2022 season. Now, Maryville will prepare for three straight road games before the postseason. Next is the longest trip of the year for Maryville, as the team will travel Oct. 8 to Macon, Missouri, to take on Lutheran North (3-2).

Until then, though, Shurvington and the rest of the Spoofhounds will just get to enjoy their Homecoming win — and his new crown.

“I’m very thankful for all the people that voted for me to be Homecoming King,” Shurvington said. “It means a lot. (Assistant coach) Tyler Houchin won Homecoming King, and he wore No. 32, so I think we’ll talk some dirt to him about it later.”