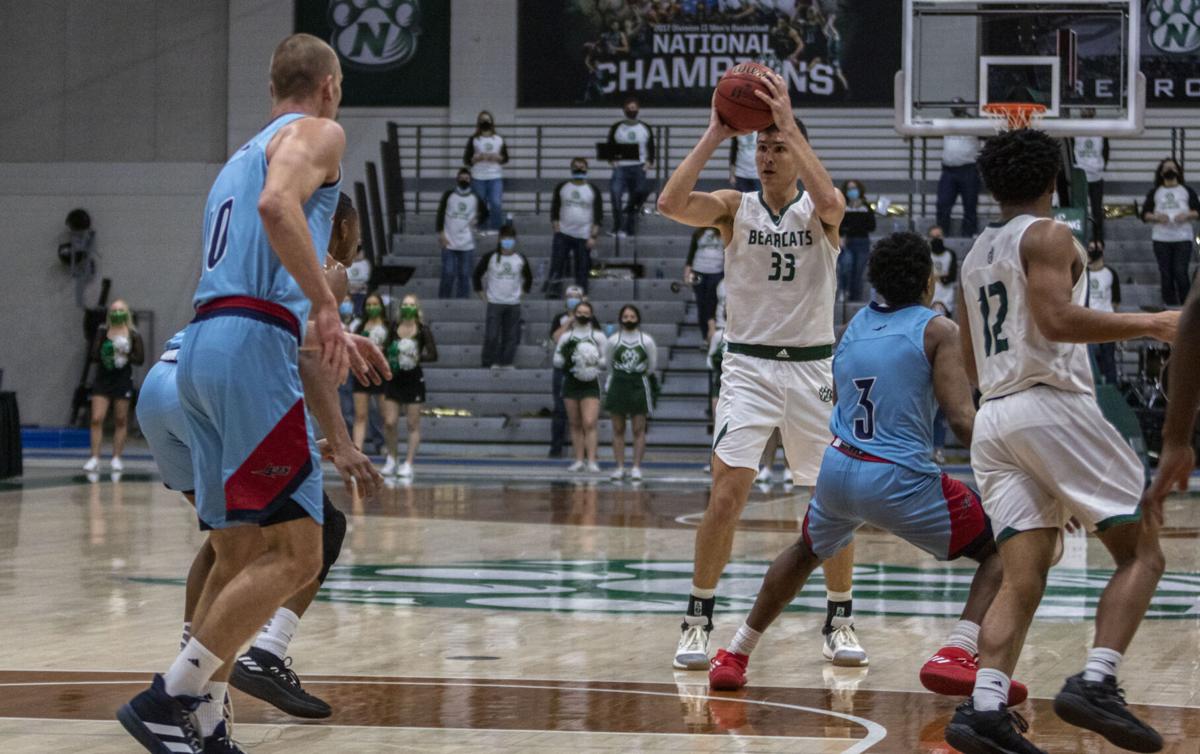 Senior forward Ryan Hawkins fakes a pass before draining a three-pointer in Northwest's 81-70 win over Newman. Hawkins shot 5 of 9 from three and led all scorers with 30 points, boosting the Bearcats past the conference-worst Jets. 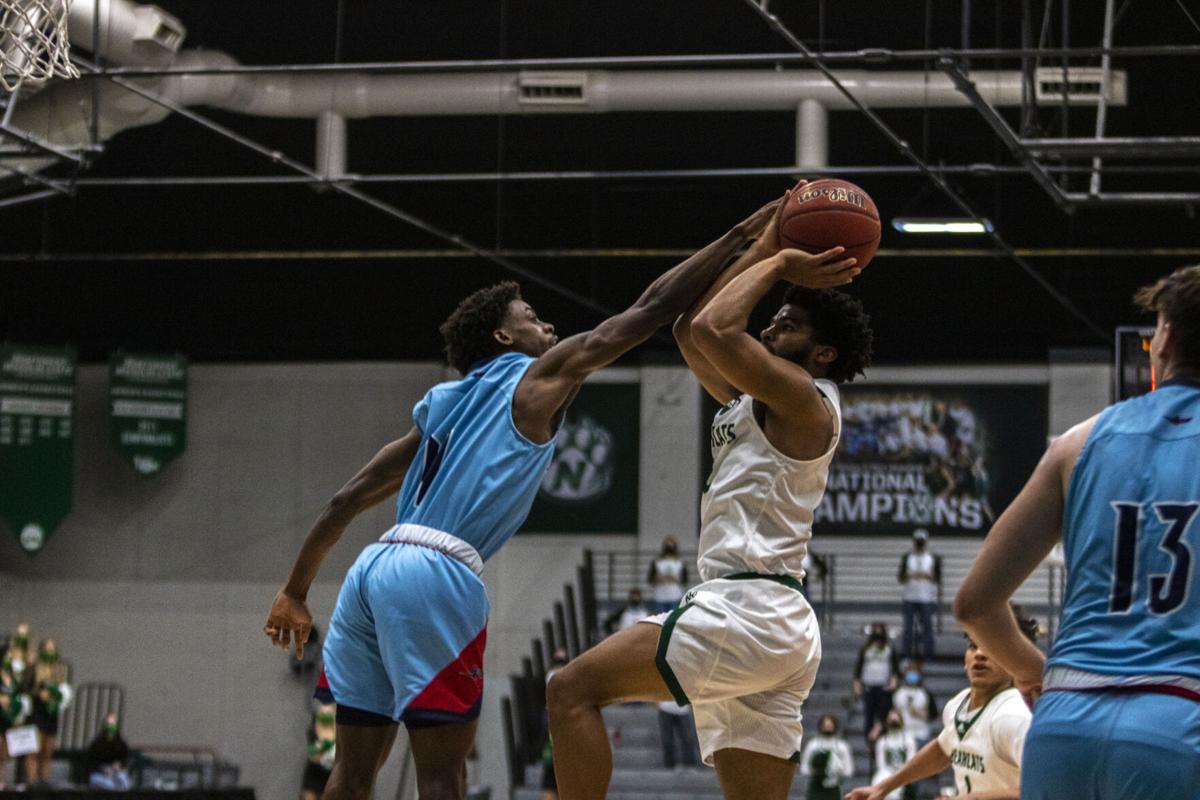 Junior guard Trevor Hudgins is fouled while shooting a contested jumper in the second half of Northwest's win over Newman Jan. 21. Hudgins scored 11 points in the comeback win over the Jets, who fell to 2-9 on the season. 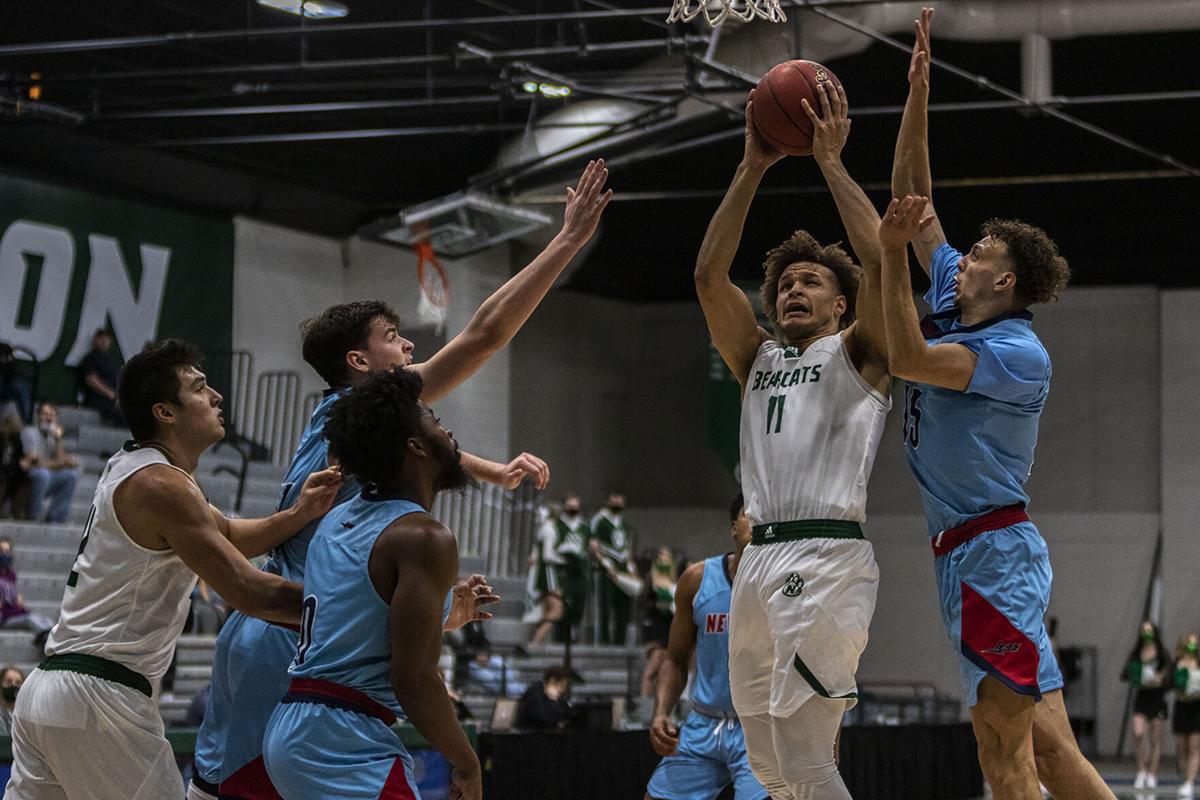 Freshman guard Byron Alexander leaps towards the rim for a contested layup in the second half of Northwest men's basketball's 81-70 win over Newman University Jan. 21 at Bearcat Arena. Alexander scored 6 points and tallied 3 rebounds in the matchup.

Senior forward Ryan Hawkins fakes a pass before draining a three-pointer in Northwest's 81-70 win over Newman. Hawkins shot 5 of 9 from three and led all scorers with 30 points, boosting the Bearcats past the conference-worst Jets.

Junior guard Trevor Hudgins is fouled while shooting a contested jumper in the second half of Northwest's win over Newman Jan. 21. Hudgins scored 11 points in the comeback win over the Jets, who fell to 2-9 on the season.

Freshman guard Byron Alexander leaps towards the rim for a contested layup in the second half of Northwest men's basketball's 81-70 win over Newman University Jan. 21 at Bearcat Arena. Alexander scored 6 points and tallied 3 rebounds in the matchup.

Prior to Northwest men’s basketball taking the court Jan. 21 to face Newman in Bearcat Arena, senior Ryan Hawkins was the fourth-highest scorer in the MIAA, averaging 19.3 points per contest.

Hawkins tallied a game-high 30 points in the No. 3 Bearcats’ 81-70 win over the Jets, marking the 31st time the forward has scored at least that many in a Northwest uniform, but was nearly as relieved as he had been all season.

“About time the ball goes through the hoop for me, I feel like,” Hawkins said. “I shot the ball with confidence, a little bit. I shot one, saw it go in — felt good.”

As big of a performance as it was for Hawkins, it was one that didn’t come easy, despite things coming easy for the Bearcats in the early parts of the first half.

“I think the first five minutes or so just came so easily for us offensively, and we were getting stops defensively, so we got pretty complacent,” Hawkins said. “Sometimes all it takes is one shot, and they hit that shot, so we had a ball game after that.”

“Early ripe, early rotten,” Northwest coach Ben McCollum said. “We were playing really well to start, and it became probably too easy. … When that happens, sometimes you fall in love with that ease, and you forget that you have to run offense.”

The shot Hawkins referenced was one courtesy of Newman’s sophomore guard Ian Lee, the 3-pointer that ignited the Jets’ run, which led to the Bearcats leading by a mere 2 points at halftime.

“After that, they had the confidence,” Hawkins said. “Once you give a team that confidence, it’s gonna be a good game.”

Despite leading at the half, the Bearcats watched their already slim lead, one that was once the game’s highest, disappear. On Northwest’s first possession of the second half, sophomore guard Luke Waters committed a turnover, which Newman used to tie the game at 35.

After three lead changes and a tie, Newman pulled away and soon led by a team-high 5 points with 11:30 left in the game.

Hawkins, the Bearcats’ game-leading scorer and rebounder, got a transition layup to go in with 5:47 left. That layup gave the Bearcats a 61-59 lead, a lead they held onto for the remainder of the game.

“Those first 15 minutes of the second half was — our defense in the last 5 minutes is what saved us there,” Hawkins said. “But we were atrocious defensively.”

The defensive efforts of Hawkins, which McCollum described as great as the forward guarding all five Newman players at once, were good enough for 3 steals, which moved him to a tie for No. 3 on the program’s all-time list (188).

Prior to the matchup with Newman, McCollum said the Jets were an athletic, defensive team that was going to give the Bearcats their best shot. The Jets did that, and Northwest wasn’t quite expecting such a rollercoaster of a game with a team that pales in comparison to where the ’Cats are in the league’s standings.

“I didn’t think we were overly prepared, meaning from my end,” McCollum said. “I probably didn’t do a good job of preparing them, helping them understand how good this team actually is.”

The other thing, McCollum said, could’ve been the hangover from the Bearcats’ layoff due to COVID-19 among the program.

“I think you’re just seeing a first semester team right now,” McCollum said about the Bearcats’ limited number of games to this point in the season compared to years in the past. “We’re still probably with the lingering effects of a 23-day quarantine where our conditioning’s not as good as it needs to be.”

The Jets wanted to win too, McCollum said. He said Newman probably wanted to win more than Northwest did, as do most of the teams the Bearcats play due to the stature of the program.

In the end, McCollum isn’t going to be down on his team for winning a game, one that keeps them toward the top of the MIAA standings and country.

“I’m beating them up, like, they’re 9-1 and playing fantastic,” McCollum said about his team. “Our numbers are fantastic. I just expect so much out of these guys; we just need to keep getting better.”