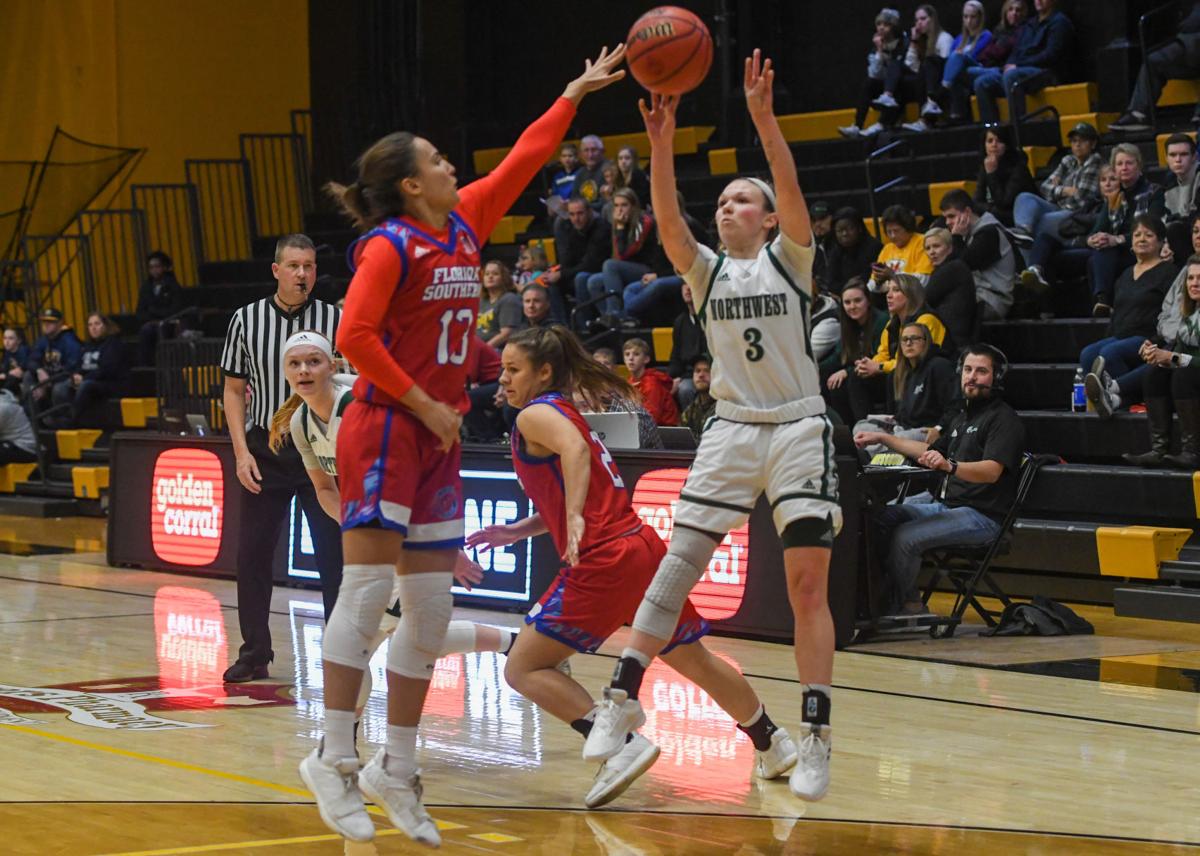 Northwest junior guard Jaelyn Haggard shoots over a defender in the Bearcats' 52-37 win over Florida Southern Nov. 29. Northwest shot 35% on its way to defeating the Mocs. 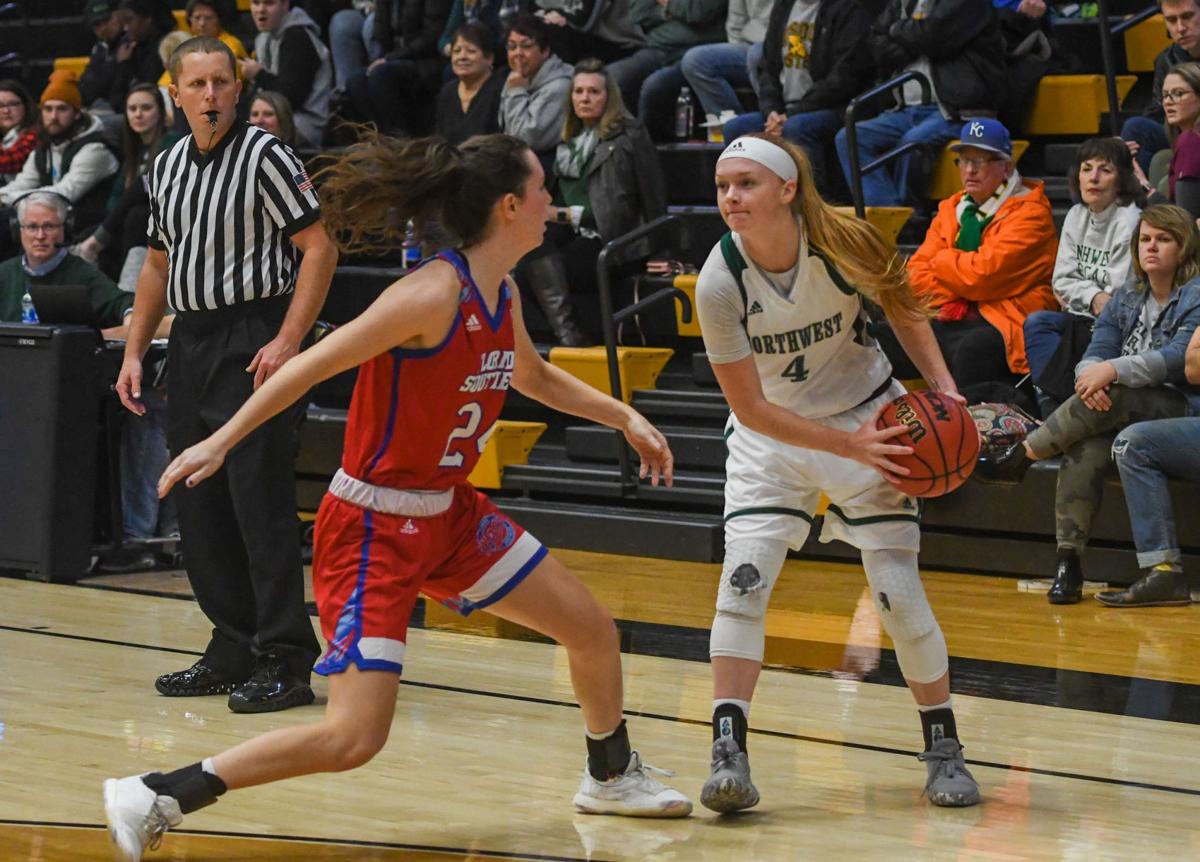 Northwest junior guard Kylie Coleman squaring up to shoot against a Florida Southern defender. Coleman scored 17 points while shooting 4-for-9 in Northwest's 52-47 win over the Mocs Nov. 29.

Northwest junior guard Jaelyn Haggard shoots over a defender in the Bearcats' 52-37 win over Florida Southern Nov. 29. Northwest shot 35% on its way to defeating the Mocs.

Northwest junior guard Kylie Coleman squaring up to shoot against a Florida Southern defender. Coleman scored 17 points while shooting 4-for-9 in Northwest's 52-47 win over the Mocs Nov. 29.

ST. JOSEPH, Mo. — Black Friday: traditionally a day where people search for deals on their favorite items, a day people search the fridge for Thanksgiving leftovers and, this year, a day Northwest women’s basketball was searching for its fourth win of the season against South Region powerhouse Florida Southern.

The Bearcats found it.

In its fourth, and biggest, win of the 2019-20 campaign, Northwest (4-2) defeated Southern (4-3) 52-37 in the MWSU Thanksgiving Classic Nov. 29. After a 70-43 blowout of Nebraska Christian, Northwest was tasked with playing the Mocs, a team that won 30 games a season ago before losing in the South Region Championship. The win for the Bearcats, Northwest coach Austin Meyer said, was huge for the program.

“It’s still early,” Meyer said. “But I think anytime you can beat a team that won 30 games last year — it’s a really well-coached team that’s a lot of games over the year.”

The win, although evident, wasn’t pretty. The contest, offensively, was rather atrocious for both the Bearcats and the Mocs. The same team, Northwest, that came away with a 15-point victory, led 9-8 after the first 10 minutes of action. The mere lead wasn’t due to strong defensive efforts. Instead, it was due to a lack of execution from the Bearcats’ offense and a greater lack of execution from Southern.

The Bearcats shot 3 for 9 in the first period, the baskets coming from two layups via junior forward Mia Stillman, a three from junior guard Kylie Coleman and a pair of layups from junior guard Jaelyn Haggard. The struggles, Meyer said, obviously weren’t pretty. On the bright side for the Bearcats, they were still defending, Meyer said.

“With us, it’s just that we aren’t getting a ton of stuff at the basket,” Meyer said. “We’ll go back and look at it but I thought eventually we did a good job of getting downhill and getting good shots.”

After sitting a pair of games due to injury, Coleman served as a spark for the Bearcats in a half that lacked much fire to anything. In some ways, a three from the guard with 2:51 left in the first half would go on to show how the rest of the night would go. Coleman eventually finished the game with a game-high 17 points while shooting 4-for-9. The scoring spurt, Coleman said, was due to everybody on the court aside from herself.

“I completely have to give that one to my teammates,” Coleman said. “I mean, the girls were helping off of me and then my teammates found me wide open, so, I just had to knock it down for them.”

Senior guard Kendey Eaton, typically finding herself in the driver’s seat in terms of scoring for Northwest, took a back seat approach to Coleman’s game where she matched her season-high point total. Eaton finished 3 for 12 with 9 points in 24 minutes of play. The win wasn’t about another scoring onslaught for the guard. Instead, it was about watching a teammate’s work pay off.

“She was just confident and that’s awesome,” Eaton said about Coleman. “She’s always working. She had to fight a lot to knock down the shots and she was knocking them down — I’m so excited for her.”

Coleman finished with four turnovers individually. Collectively, the Bearcats turned the ball over 19 times. One thing that seldom changed possessions in the contest was the lead. Northwest led for more than 33 minutes compared to the 3:42 that Southern led. The wide margin at the end, Eaton said, was unfamiliar.

“There was less than a minute left and the coaches were like, ‘Oh, I didn’t know we were up by that much,’” Eaton said. “It was funny because we haven’t been in too many of those situations where we’ve been leading for the whole game and it was really refreshing. It was different and awesome and just great.”

Despite offensive struggles, defensively, Northwest held Southern 32% shooting in the game. The most eye-popping stat is the one that says the Mocs shot 0-for-11 from behind the arc. The Bearcats, Eaton said, knew they would have to be defensively sound. Simply put: the Bearcats did their jobs, Eaton said.

“Our coach stresses defense more than anything,” Coleman said. “To be able to come out and play defense for 40 minutes straight like that and work, it shows how much heart and dedication we have. I think it’s going to prove that we can do that for the rest of the year so that’s awesome.”

The win for Northwest puts the Bearcats two games above .500 for the first time since they started the season on a seven-game win streak to start the 2016-17 season. For Northwest, Eaton said, it's something that the Bearcats are looking to build on heading into a date with McKendree in the MWSU Thanksgiving Classic Nov. 30.