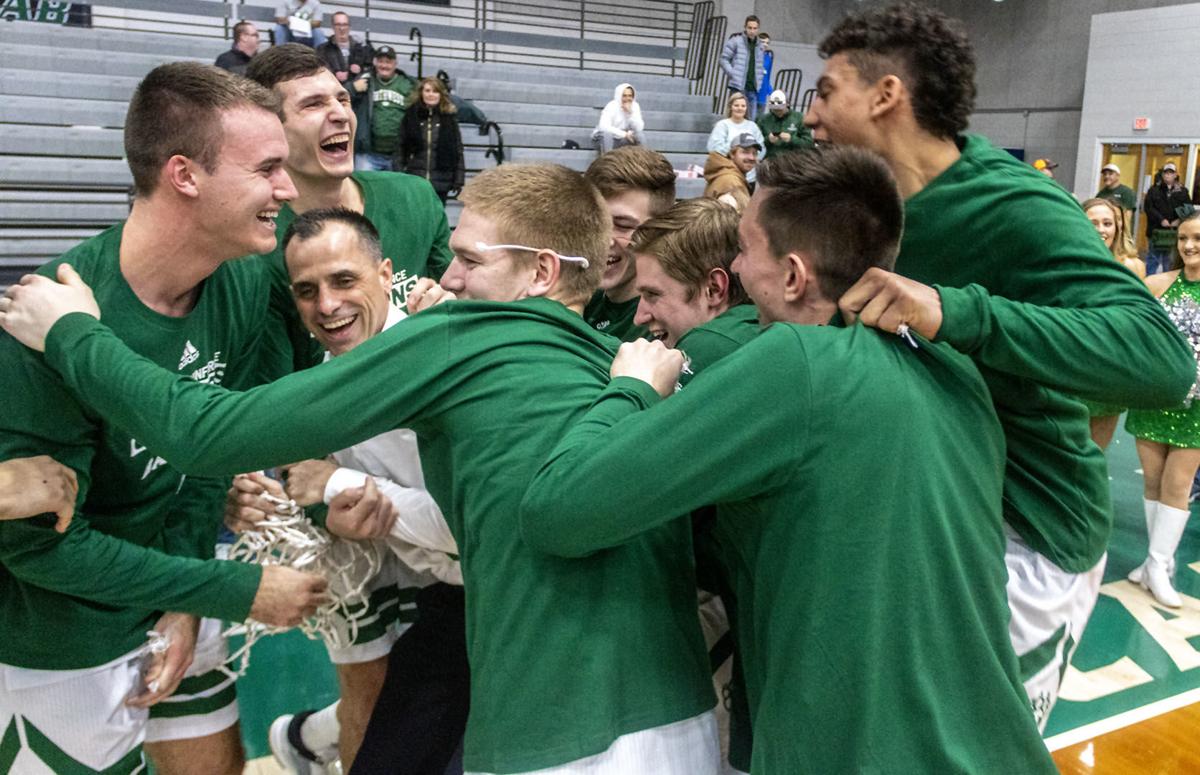 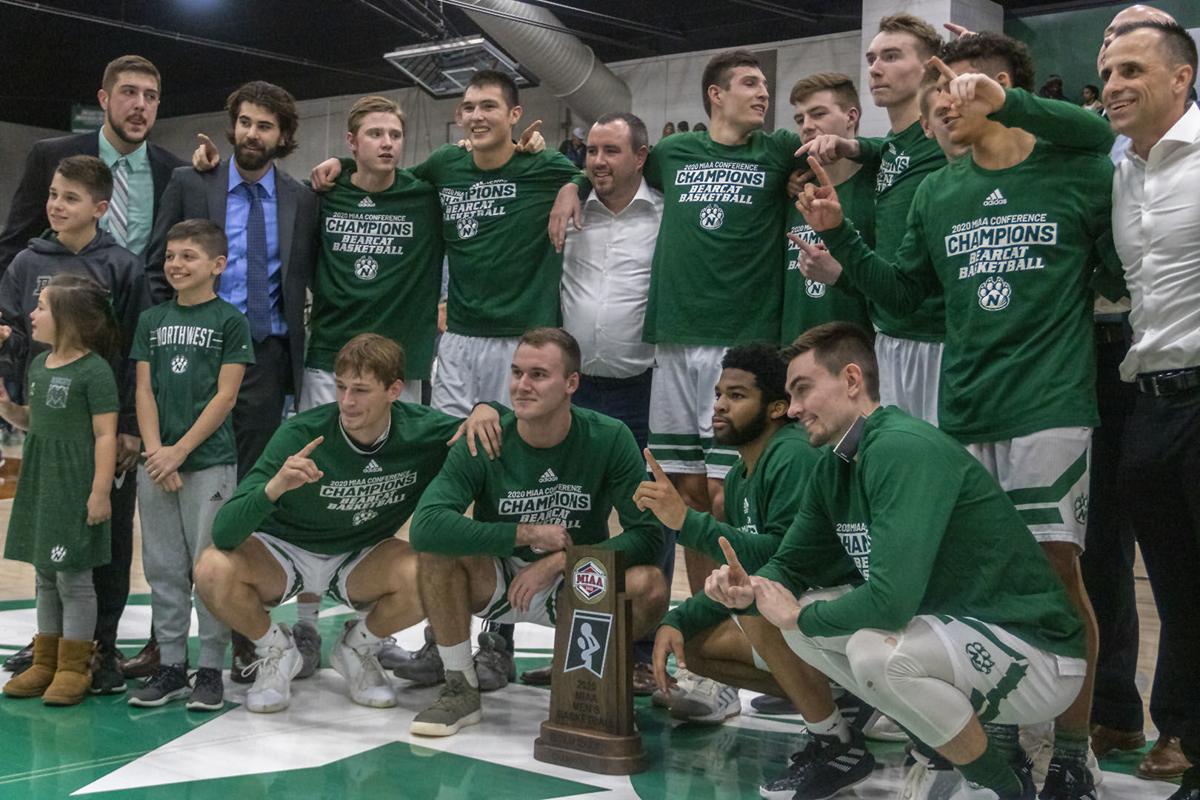 Northwest men's basketball poses for a photo after clinching its seventh regular season conference trophy in a row. 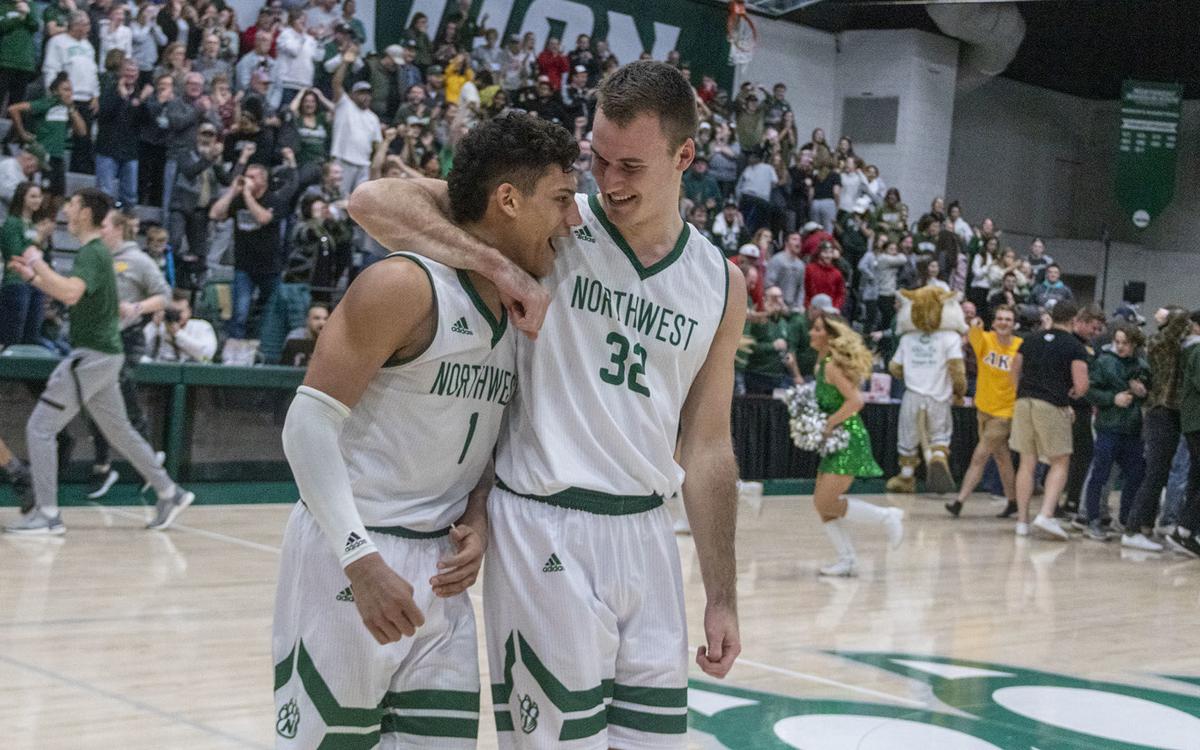 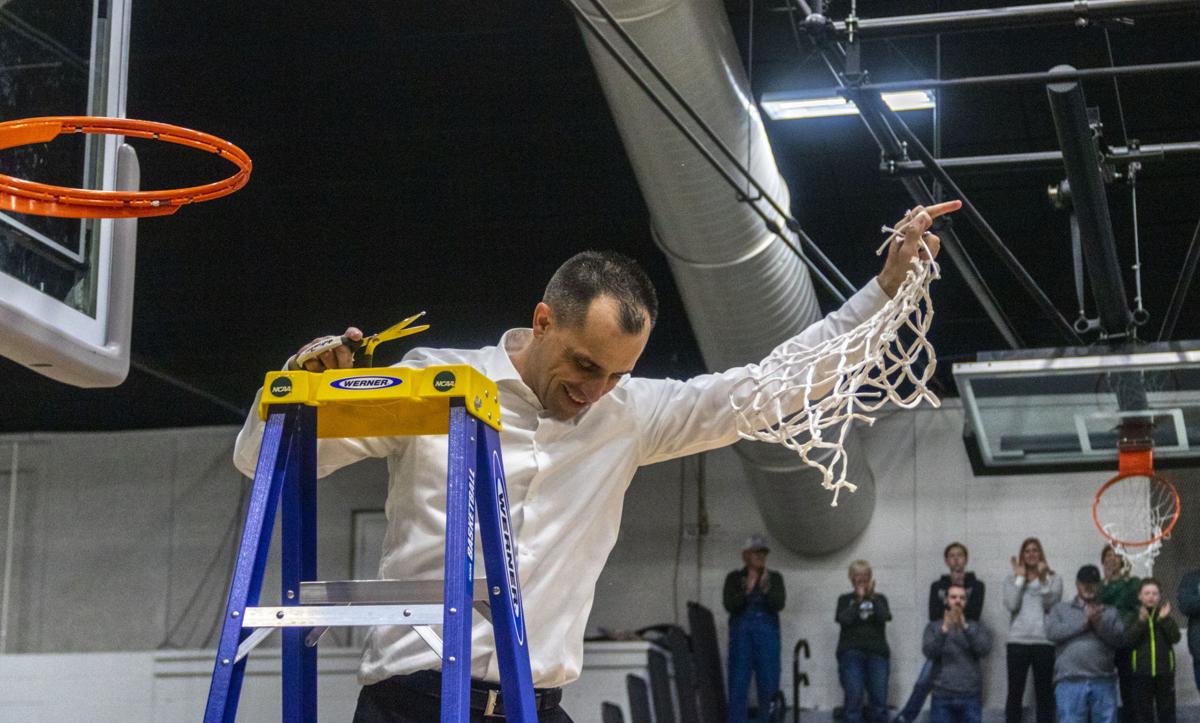 Northwest men's basketball coach Ben McCollum cuts down the net of the south hoop in Bearcat Arena after the Bearcats clinched their seventh-straight regular season conference title with a win over No. 17 Missouri Southern Feb. 20.

There were less than 7 seconds left on the play clock in Bearcat Arena when the ball got to Trevor Hudgins.

The sophomore point guard received a pass from junior Ryan Hawkins, who had just secured one of the biggest rebounds of his career after Missouri Southern’s Braelon Walker missed a free throw.

The Bearcats had time to prepare for this. They trailed Southern, the No. 3-ranked team in the Central Region and No. 2 team in the MIAA, 76-75. They consulted before Walker’s free-throw attempt. If he missed the first leg of the one-and-one, they knew they’d have a chance to win the game.

They knew their seventh consecutive regular-season MIAA title was on the line. They knew a home win streak that dates back to March 2018 could be nearing its expiration. They knew to get the ball into the hands of Hudgins. They knew the entirety of the 40-minute contest and the team’s place atop the NCAA Central Region rankings boiled down to what the point guard would do when he got it.

Hudgins received the pass and sprinted up the court. He sprinted toward the moment.

There were 4 seconds left on the clock when he passed mid-court. There were 2 seconds left when he appeared stuck, smothered near the left wing by a pair of Lion defenders. Northwest’s hopes of cutting down nets at Bearcat Arena Feb. 20 in celebration of a conference title grew bleaker with every passing millisecond.

With the partial fate of his team’s season weighing on his shoulders, Hudgins knifed through Walker and Southern guard Elyjah Clark toward the basket. He cut back and shifted his body’s weight to his right foot. He let go an off-balance shot, one that floated off his left hand with Walker’s body nearly draped over his, Walker’s right hand just inches from tipping the ball.

And then Hudgins sprinted toward the other side of the court again, this time away from the moment. But the moment followed him. His off-balance, one-handed prayer-of-a-shot fell through the net at Bearcat Arena as the game’s final buzzer sounded. No. 1 Northwest men’s basketball beat No. 17 Missouri Southern 77-76 in the matchup, securing its seventh consecutive conference title and prompting a net-cutting ceremony, one that followed the dogpile that caught up to Hudgins near midcourt.

“It was God,” Hudgins said. “It was God at the end of the day. I just stepped through, tried to find the littlest space that I could. I just threw it up. It was a prayer, so thank God for it.”

The shot that delivered Northwest its 20th MIAA title was not supposed to happen. At least, not how it did, Hudgins said. McCollum warned the sophomore to utilize a timeout on the final possession if he didn’t see an opening. Hudgins admitted in the aftermath of the team’s celebration that there wasn’t much of an opportunity to take the shot he took.

And still, the shot went in. In some ways, its doing so served as a miracle. In others, it depicted what seemed bound to happen.

It was a snapshot of Northwest’s standing in the conference over the last decade. It was the latest dramatic moment in a series of physical matchups between Northwest (25-1, 15-1 MIAA) and Southern (19-6, 12-4 MIAA). It was Hudgins, who has torn through the MIAA over the last several weeks while winning two-consecutive conference Player of the Week awards, at his best, sinking the biggest shot of the season at the end of what Hudgins called the “craziest game” of his career.

“Sometimes it’s better off just to take a shot like that,” McCollum said. “That’s probably about as good of a look as you’re gonna get regardless. I was happy with it, obviously. Wow. I mean, that was — wow.”

The last possession, of course, came after 39 minutes and 54 seconds of physical basketball. Redshirt freshman swingman Luke Waters, who guarded Southern’s 6-foot-9-inch forward Cam Martin for much of the night, fouled twice in the game’s first two minutes.

The pair of quick fouls set the precedent for what the game would be. There was a testy environment, one that came with verbal altercations and pointed celebrations. There was Martin, who bullied Northwest in the paint for much of the night and finished with 33 points and 11 boards. And there was tension, which only heightened as the game wore on.

After carrying a 39-33 lead into halftime, Northwest slowly watched it dissipate. Southern shot 50% from beyond the arc in the second half. Neither team went on a single double-digit scoring run throughout the contest. The matchup came with 19 lead changes.

“It was just crazy,” Hudgins said. “They punched us in the mouth to come out. And we fought. That’s what Northwest does. We fight.”

After rebuilding a lead midway through the second half, leading the Lions 49-44, Northwest’s defense began to breakdown. Southern tied the game at 49. The two teams went back-and-forth again before tying again at 58. The pattern drug on.

In the game of back-and-forth, the Bearcats leaned on Waters, who finished the game with 17 points after sitting for much of the first half. They leaned on Hawkins, too, who finished with 19 points on 7-of-14 shooting. And when they needed one last bucket, when they faced a 76-72 deficit with just over a minute left to play, they called on Hudgins, who scored the last 5 points of the contest to deliver the Bearcats their 31st-consecutive home victory.

“I honestly had no doubt,” Waters said. “I’ve seen Trevor do that his entire career.”

“I knew he was gonna get the shot off, and when it went up, you just have faith in your players,” sophomore guard Diego Bernard said. “I was the first one to go tackle him. It was crazy.”

As Hudgins sprinted back toward center-court, Bernard and company chased him down and piled on top of him. A group of students and fans rushed the court, briefly joining the Bearcats in celebration. The Lions walked back toward the visiting bench at Bearcat Arena, preparing to shake hands with Northwest, preparing for a 250-mile bus ride home.

The dogpile gave way to a trophy presentation, something Northwest has grown accustomed to. The Bearcats posed for photos and took turns scaling a blue ladder underneath the south hoop inside the arena, snipping pieces off the net, one they’d won 25 games to earn the right to cut down.

“We just wanted to cut down nets at the end of the day,” Hudgins said. “And that’s what we did.”

He had been there before. But in the aftermath of his latest triumph, after a celebration and handshakes and posing for group photos, McCollum said it feels different each time. He said he was excited. He said cutting down nets at Bearcat Arena hasn’t gotten old.