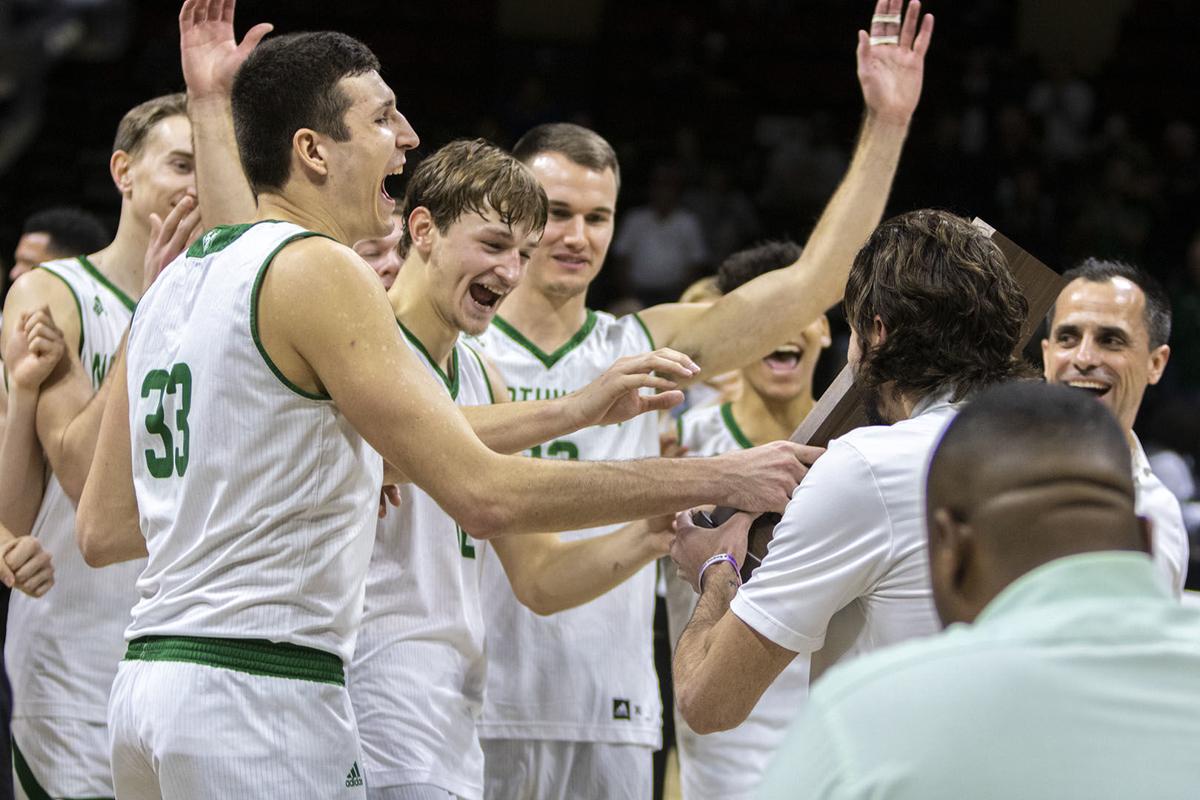 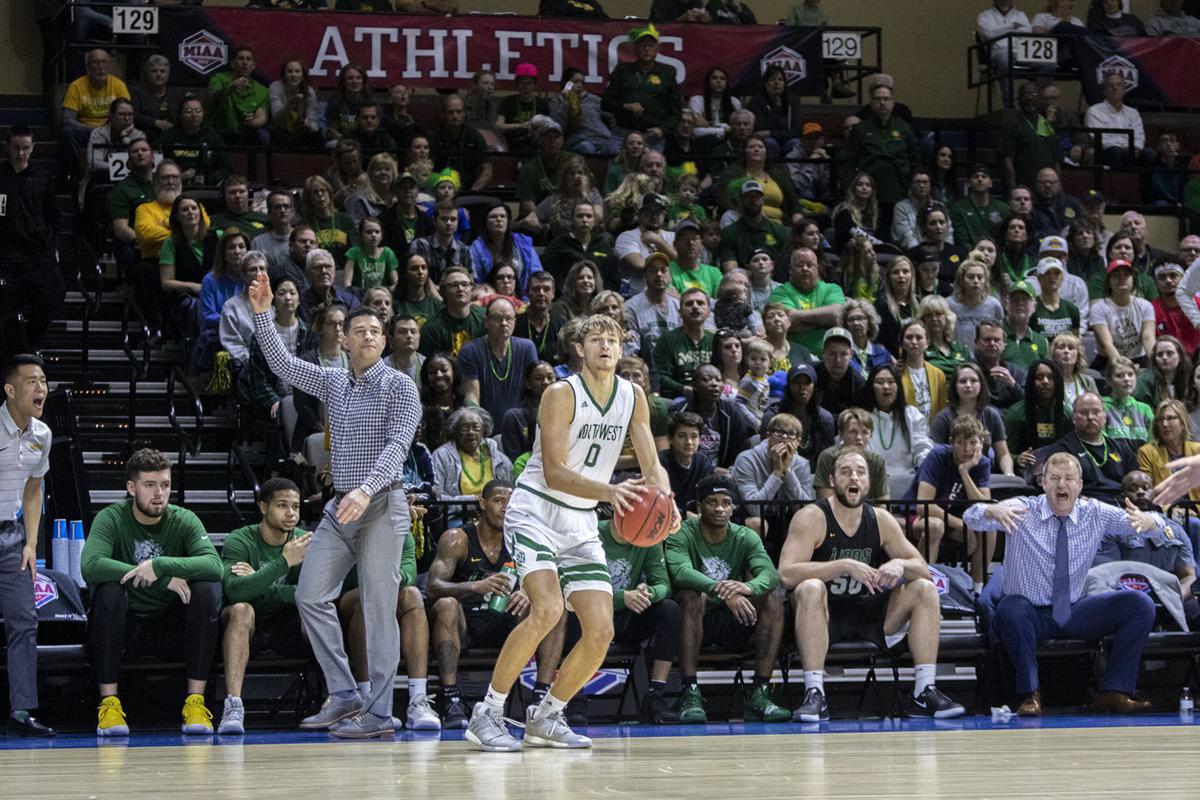 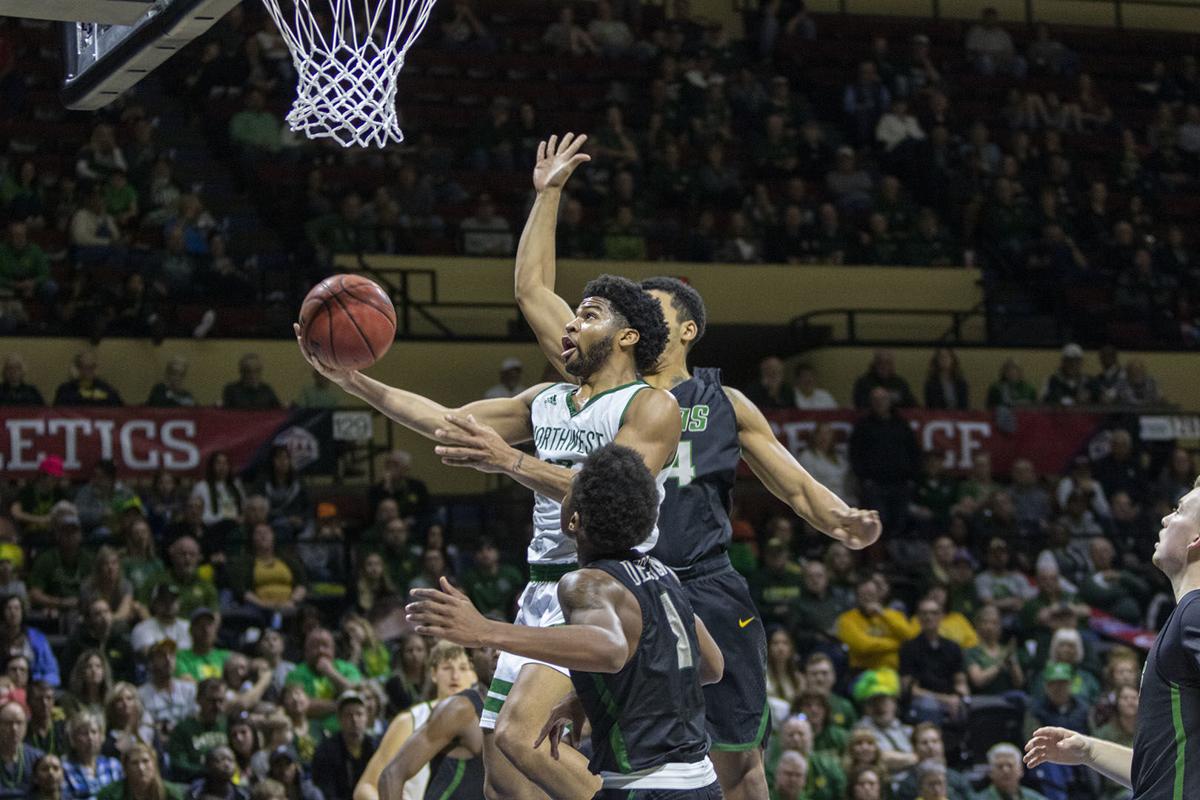 Sophomore guard scored 9 of Northwest's last 11 points to lead the Bearcats to a 78-76 win over Missouri Southern in the MIAA Tournament Championship, finishing the game with 31 points and wining the tournament's Most Outstanding Player Award.

KANSAS CITY, Mo. — It was well after he’d entered the game off the bench nearly seven minutes into the contest and scored 16 first-half points when Northwest freshman forward Wes Dreamer took his seat behind a black-clothed table, in front of an MIAA-branded backdrop.

It was after he’d finished Northwest men’s basketball’s win with 18 points on 7-for-14 shooting, having ignited the Bearcats’ first-half offense and drawn the toughest defensive assignment Missouri Southern had to offer, holding 6-foot-9 forward Cam Martin in the paint after he’d been forced to the ground by one of Martin’s post moves and called for a defensive foul on another.

And it was after he’d climbed a yellow ladder at Municipal Auditorium to help cut down the net from the court’s north basket, celebrating Northwest’s 78-76 win over Missouri Southern (23-8) March 8 and the team’s fifth consecutive MIAA Tournament Championship.

Facing reporters behind a microphone on the outskirts of the upper level of Municipal Auditorium, Dreamer examined the stat sheet in front of him that displayed only portions of his impactful performance. His shaggy hair was still damp with sweat he’d worked up from the 30 minutes he played in the contest.

Sitting next to coach Ben McCollum, the MIAA Coach of the Year, and two seats down from sophomore guard Trevor Hudgins, the MIAA Player of the Year and MIAA Tournament’s Most Outstanding Player, Dreamer seemed out of place, just as he’d seemed moments earlier when celebrating the tournament title with his teammates, and moments before that when guarding Martin.

His coach is used to facing the media after championship wins. His teammates — all but one of them on the active roster — have cut down nets at Municipal Auditorium before. But Dreamer is still new to this.

“It felt really good, hearing all the people cheer,” Dreamer said. “Yeah — it’s just one of the things I haven’t done before. Hopefully, we can do it for four more year— three more years after this.”

In the box score, Dreamer’s biggest moments came shortly after he entered the game, serving as a sparkplug for Northwest’s offense in the early going, hitting 4 of 7 shots from beyond the arc in the first half. The 16 points Dreamer scored in the final 13 minutes of the first half helped the Bearcats (31-1) carry a 45-33 lead into halftime.

But Dreamer’s impact on the game was perhaps more significant, though less tangible. He scored 2 points in the game’s last 20 minutes, 17 of which he played. He didn’t grab a rebound in the second half and recorded 1 assist. But for much of the half, he was tasked with guarding Martin, the All-MIAA forward who scored 20 points in the last 20 minutes.

“He tried. He was like a little rag doll, wasn’t he?” McCollum said, referring to Dreamer’s defensive efforts. “I thought he battled, you know? I thought he fought as much as he could possibly fight. It’s just really hard, (Martin’s) really good. … I thought (Dreamer) did as good a job as we possibly could against him.”

“Yeah, it’s not easy,” Dreamer said. “Just try to be faster than he is, getting around him. That’s about all you can really do, ’cause once you get behind him, there’s not really a way to stop him.”

After carrying a 12-point lead into the locker room, mostly courtesy of the 16 points provided by both Dreamer and Hudgins, Northwest began to coast for much of the second half, watching the lead that at one point reached 15 dissolve over the course of 17 minutes.

Fighting back from a double-digit deficit, Martin stepped to the free-throw line of the south basket at Municipal, as the Lions trailed Northwest 67-66 with 3 minutes and 55 seconds left in the game. With an opportunity to sink two free throws and give Southern its first lead since the game’s opening minutes, the junior forward missed his first. He sunk the second shot to tie the game at 67.

From there, Northwest responded. The Bearcats had watched their double-digit lead disintegrate. They had watched Martin score 16 points in the first 17 minutes of the second half. And while much of the first half’s spotlight had shined on Dreamer, the second half, and particularly the game’s final three minutes, belonged to Hudgins.

Hudgins followed Martin’s trip to the charity stripe with a layup at the other end, finishing through a foul and hitting the free throw that accompanied it, bringing the Northwest fans packed within Municipal Auditorium to their feet, where many of them stayed for the remainder of the contest.

On Northwest’s next possession, Hudgins hit a mid-range jumper. He followed it with another layup with 1 minute and 9 seconds left in the game, then another by the time the game clock had reached 22 seconds.

In the wake of Martin’s free throw, the one that tied the game at 67, Hudgins took over the championship matchup. He scored 9 of Northwest’s last 11 points. He finished the contest tied with Martin for a game-high 31 points. He iced a matchup against Southern that led to a net-cutting ceremony for the second time in two months.

“(Southern is) a good team,” Hudgins said. “We just come out to play. As a whole team. We prepare and we execute as best as we can, and the results are good sometimes. And sometimes — like back in Maryville — it’s iffy. But we just like to compete against them. They’re a good team.”

The win came with another trophy presentation ceremony for Northwest, the second time this season the Bearcats have hoisted an MIAA Championship trophy after a close win over Southern. It was the team’s 17th consecutive win at Municipal Auditorium and 23rd straight win overall.

And the win set the stage for the NCAA Division II Central Region Tournament, projected to take place at Bearcat Arena in Maryville, where the Bearcats have beat No. 22-ranked Southern for a championship once already this season, and where they could have to do so again.

“You either gotta play ’em again or not,” McCollum said.