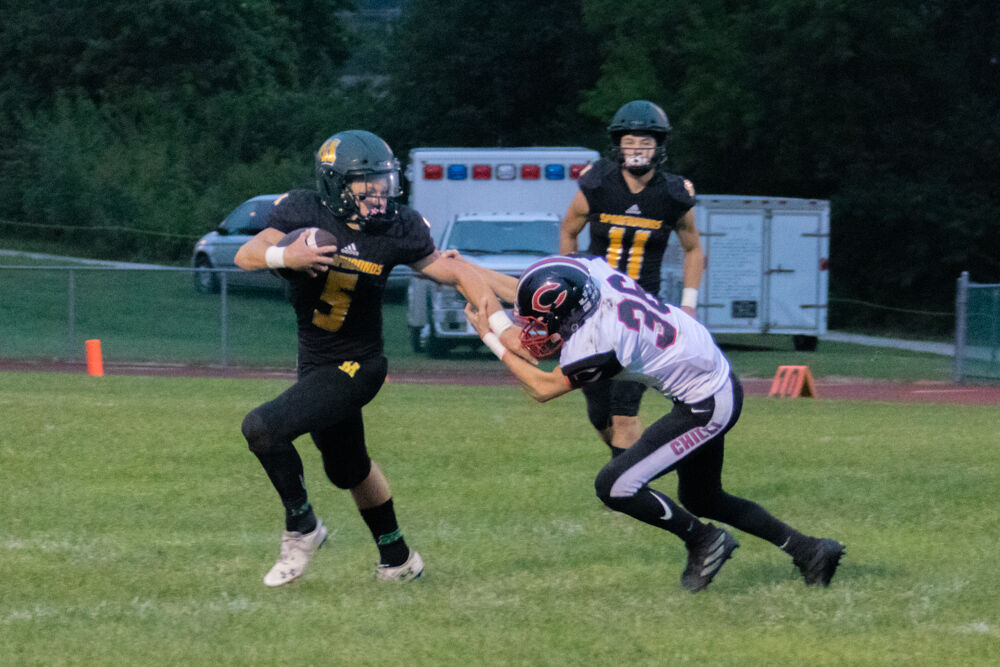 Maryville football senior running back Trey Houchin shucks off a Chillicothe defender in the Spoofhounds' 62-7 win over the Hornets Sept. 11 at the 'Hound Pound. Houchin finished the game with 89 yards rushing and one touchdown on 10 carries. 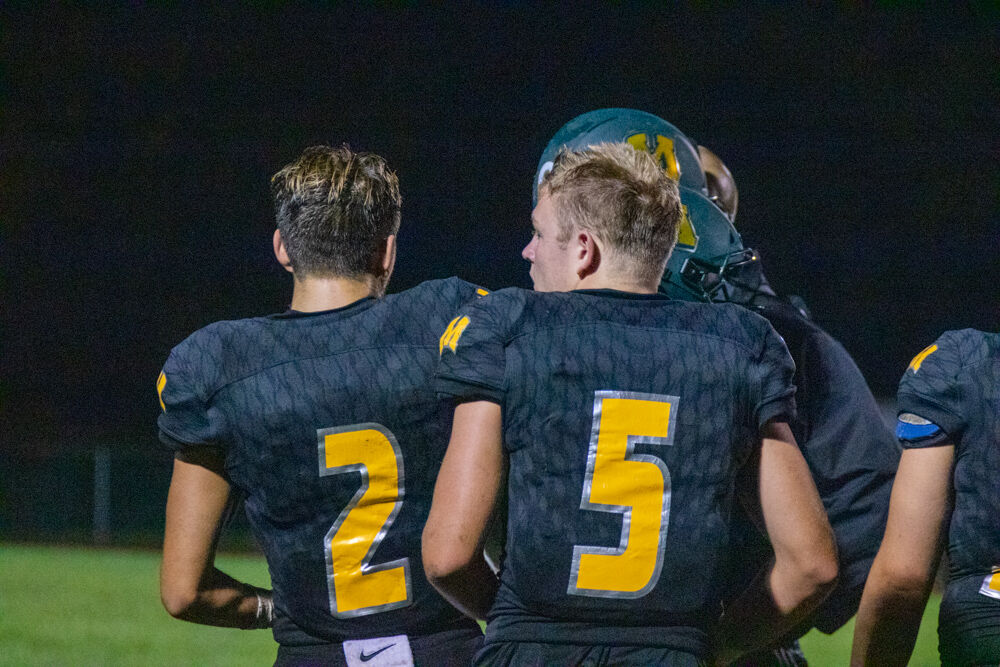 In Maryville football's 62-7 win over Chillicothe Sept. 11 at the 'Hound Pound, senior running backs Connor Weiss and Trey Houchin combined for 227 yards rushing and three touchdowns. Along with that, the duo combined for a pair of touchdown receiving, good enough for five total in the game.

As the Maryville football postgame huddle was over, the players’ voices rang throughout the ’Hound Pound as they sang happy birthday to coach Matt Webb.

“So far, it’s been a happy birthday. Another year around the sun, and it feels good turning 31,” Webb joked on his 46th birthday. “I feel great.”

In addition to Webb’s big day, it was a big day for the program’s seniors as well. Maryville honored 14 athletes on Senior Night, including running back Trey Houchin.

“It was great. Having all these seniors I’ve been playing with since third grade out here,” Houchin said. “This is our final year to go out and ball, so having them all out here was great. It was a fun game.”

However, the Spoofhounds were missing senior quarterback Ben Walker on the field during this special night, who is out indefinitely after having to repair an ACL tear the morning of Sept. 10.

Walker's influence wasn't unnoticed despite being sidelined. Senior running back Connor Weiss exchanged his usual No. 4 jersey for Walker's No. 2.

“When we were doing the Senior Night honorary stuff, seeing (Walker) in that wheelchair was just really depressing,” Weiss said. “We’ve played with him since third grade, and it’s terrible to see him not be able to play. It was an honor to be able to wear his jersey and play in honor of him.”

Weiss upheld his promise to honor Walker with an impactful performance in his first game of the season after being away from the team due to COVID-19 protocols.

Weiss’ first run of the season was an 18-yard gain, one that set the momentum for him the rest of the night.

“The feeling on the first run was great,” Weiss said. “As soon as you get that ball and you just go. Following the lineman and following the blocks is just an amazing feeling.”

The same possession, Weiss found the end zone on a 21-yard rush. In the second quarter, Weiss again found the hole and saw himself with another touchdown, this time from 27 yards out.

Weiss’s ability to find creases in the line came from having a fully healthy offensive line for the first time this season, including the return of junior offensive lineman Blake Casteel after sitting the first two weeks due to COVID-19 related issues.

“I thought we were doing a good job at the line of scrimmage,” Webb said. “The guys continually focused throughout the week on execution. Those long runs don’t happen until those guys get downfield, and there were some really good blocks made downfield.”

Weiss’s efforts in the passing game weren’t too far off of the production via his legs as he found himself with a 23-yard touchdown receiving in the third quarter, tallying his total touchdowns to three.

“You had Connor Weiss making some unbelievable effort plays on the edge,” Webb said. “He really executed tonight.”

Weiss’s partner in crime, Houchin, also left his mark throughout the night. His first touchdown came during the second quarter as junior quarterback Connor Drake found Houchin for a 18-yard touchdown pass.

Houchin wasn’t finished, as he tallied his second and final touchdown on the night with a 19-yard rushing touchdown with 10:22 left in the third quarter.

While the offense was able to start hot right out of the gate, the Spoofhound defense found themselves in trouble on the first possession of the game.

Chillicothe used 10 minutes and 30 seconds of the 12 minute quarter to score their lone touchdown of the game. Hornets’ junior quarterback Gage Leamer punched the ball into the endzone from a yard out.

“We didn’t panic,” Webb said about Maryville’s defense after Chillicothe’s game-opening drive. “We made some adjustments to what they were doing ... the speed of the option is hard … We learned as the game went on.”

Maryville’s readjustment seemingly worked, and the Spoofhounds never allowed the Hornets to find themselves in the end zone. The defense recovered three fumbles, along with stopping the Chillicothe offense twice on fourth down.

While the coaches were focused on the X’s and O’s, the players also knew they needed to step up on the defensive side.

“We got after our guys,” Houchin said. “We told them to get more physical, and after that first score it really opened our eyes.”

The victory over Chillicothe secured Maryville’s first Midland Empire Conference win of the 2020 season. A year ago, Maryville was the outright champion of the MEC.

“It feels great, it’s always important to lead the pack and not trail,” Webb said. “Chillicothe is a big rival and that was a big win. We’re ready to go 2-0 now.”

The road to becoming 2-0 in the MEC continues on Sept. 18, when Maryville will travel to Kansas City, Missouri, to face the St. Pius X Warriors (3-0).