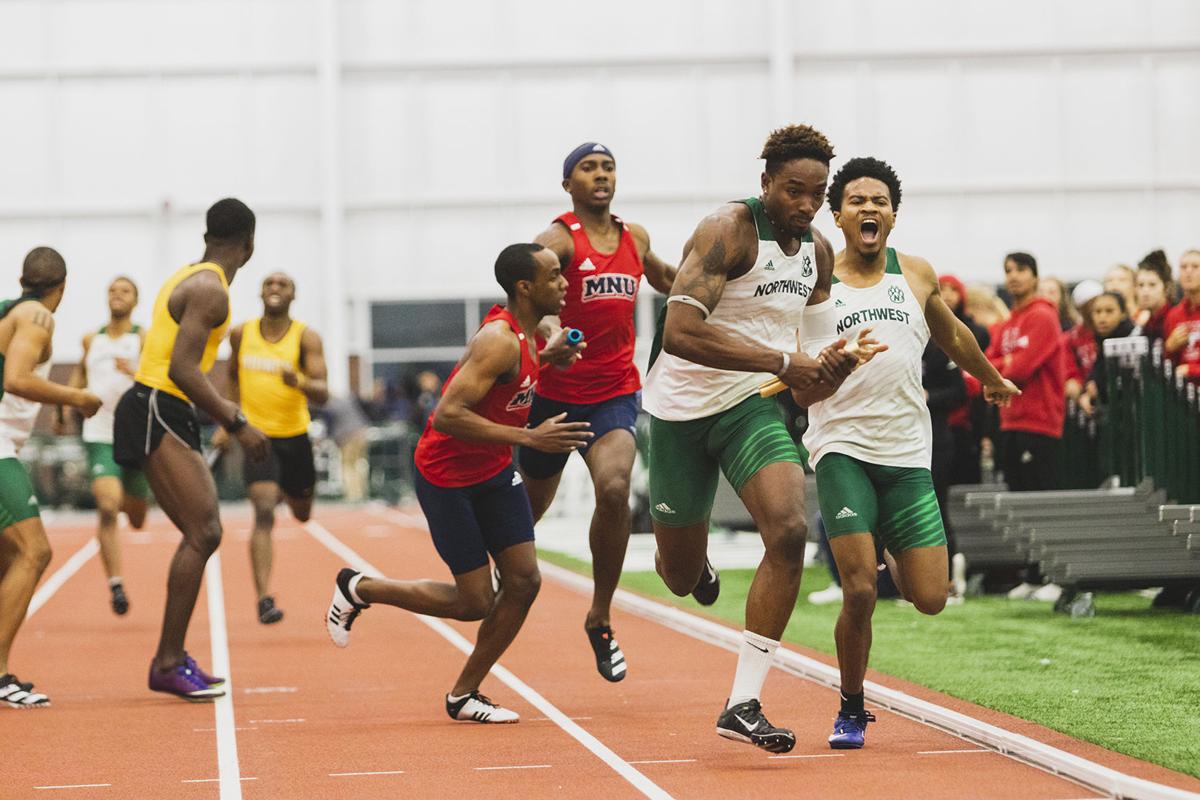 First leg of the record-breaking 4-x-400 meter relay junior Caleon Harkey hands off the baton to second leg senior Tyrell Maddox. The relay team of Harkey, Maddox and sophomores Abdelrahim Mahgoub and Omar Austin set the third fastest time in the nation at the Bearcat Open Feb. 8 with a time of 3:10.96. 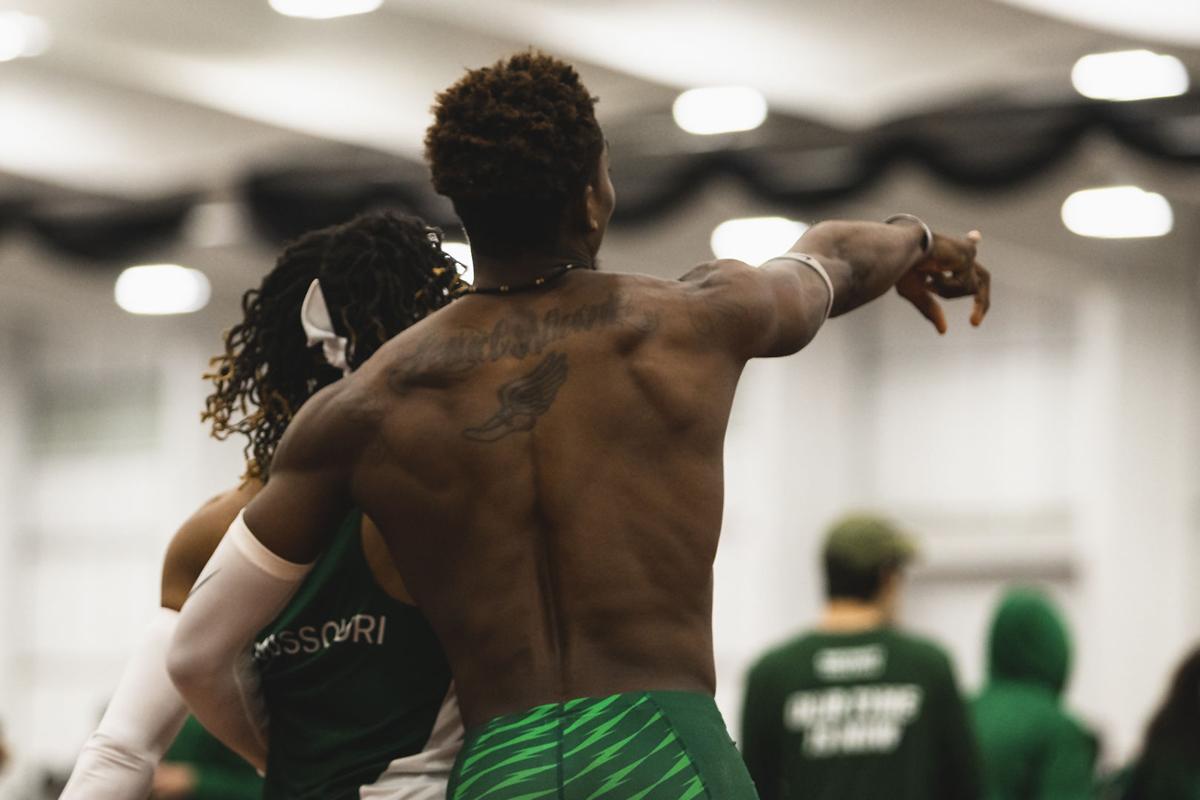 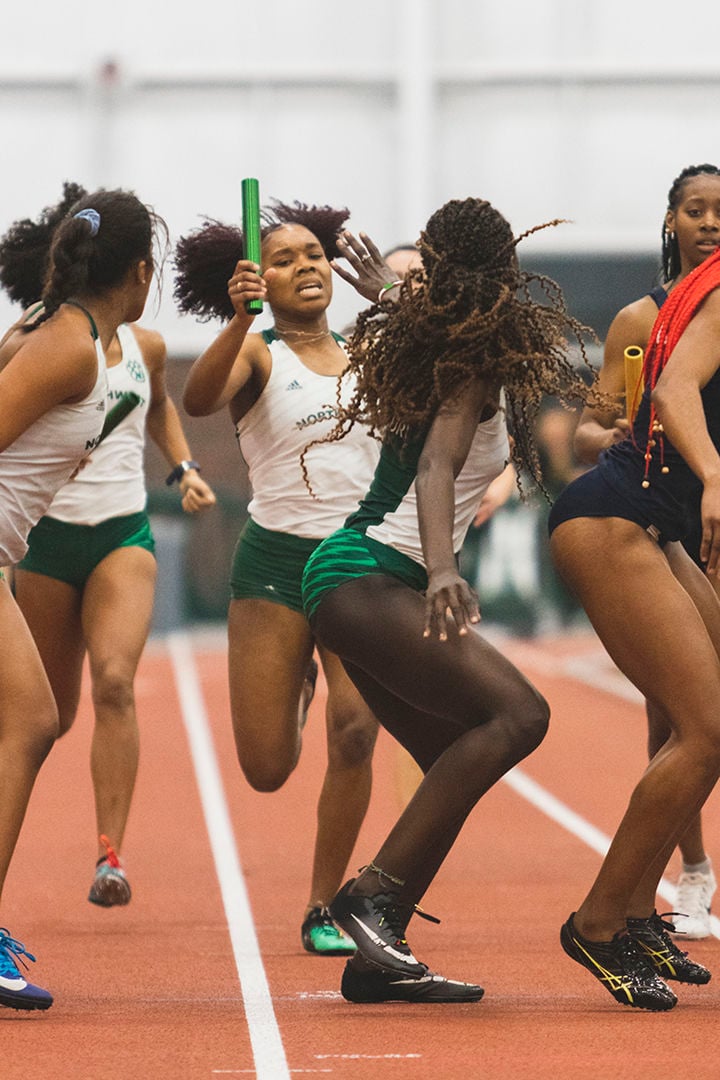 Senior Hiba Mahgoub grabs the baton from freshmen Aliyah Simmons during the 4-x-400 meter relay at the Bearcat Open Feb. 8.

Hosting 40 teams and roughly 1,300 competitors Northwest indoor track and field team had numerous athletes on both the men’s and women’s side post top-five marks across the nation. The Bearcat Open Feb. 7-8 at the Carl & Cheryl Hughes Fieldhouse.

In its last home meet of the season, the most dramatic of those that punched their ticket to the NCAA Division II Indoor Track and Field National Championships came in the men’s 4-x-400-meter relay. The race, per usual, was the last event of the meet and the anticipation was palpable as the lights were dimmed prior to the race and Guns N’ Roses reverberated off of the four walls of the building.

The team — made up of junior Caleon Harkey, senior Tyrell Maddox and sophomores Abdelrahim Mahgoub and Omar Austin — was poised for a special race when the anchor, Austin, got the baton with a substantial lead.

As Austin neared the finish line, a pack of Bearcats was gathered around with anxious enthusiasm that transitioned between glancing at the clock on the scoreboard and cheering on Austin as he rounded the final turn. Maddox was waving his arms and spurring Austin on as he crossed the finish line. The final time for the team was 3 minutes, 10 seconds and 96 milliseconds. The time marked a new program record and the third-fastest time in the country.

What followed was a mosh pit of celebration, including everyone from athletes to graduate assistants to coach Brandon Masters himself. The win, Masters said, was a statement race for the team.

Freshman Jada Shanklin was also a recipient of some raucous support from her team. Shanklin won the women’s high jump with a jump of 1.75 meters, which was her personal best in college, top five in the country and automatically qualified her for NCAA Division II Indoor Track and Field National Championships March 13-14 in Birmingham, Alabama. Shanklin cleared the bar on her last attempt to a loud reception from many of her teammates and also a few of her opponents.

“I just had fun with it; I got the crowd clapping,” Shanklin said. “At that moment I just had some more adrenaline.”

“It was cool to see the team lift her up,” Masters said. “To see that they had a hand in her success is pretty cool.”

Senior Jordan Hammond, who scored a personal best in the women’s pentathlon, was another athlete that posted national best marks. Hammond finished with a final point total of 3,717, which vaults her into the top five scores in the country.

Perhaps the most feel-good story of the day for the Bearcats came via thrower Josh Warner. The senior was a program veteran that left Hughes Fieldhouse with a win. Warner won the men’s shot put with a throw of 16.44 meters, which, Warner said, is the third-best throw he has ever had during a competition. The win in men’s shot put was the fifth-year senior’s first win at an NCAA Division II meet.

“It was good to go out on top,” Warner said.

The road to victory, Warner said, and his time at Northwest has not always been easy. Warner remembers a time before the Bearcats had the opportunity to practice in Hughes Fieldhouse when they were practicing in Lamkin Activity Center during the early hours of the morning. He said that the restrictions of Lamkin made practicing for indoor season extremely difficult, but that Hughes Fieldhouse has changed that.

“We can be in this place and be so much better than some other teams that maybe don’t have that opportunity,” Masters said.

Warner, similar to Austin and Hammond, was cheered on by the rest of the team. The support, he said, was something that was enjoyed and welcomed during his first career win. Prior to Masters addressing the team after the meet, chants of his name roared from the huddled-up athletes.

His first-place finish, in some ways, derived from the added motivation that the team provided.

“You are always going to compete harder for your team than you will for yourself,” Masters said. “That’s the culture that we put in place here at Northwest.”

Masters is looking to carry the team unity that was showcased throughout the season and at the Bearcat Open into the postseason. Masters, in his conversation with the team following the meet, told the Bearcats to remain humble and hungry.

“We’ve been the hunters, that’s been the philosophy of this team,” Masters said. “No one is going to give us this (MIAA) championship. We gotta take it.”

The biggest competition for the Bearcats in the conference, Masters said, will be Missouri Southern and Lincoln. Southern has a team with great depth, and Lincoln has a lot of talent.

“Two teams that are unbelievably talented and scary teams to face that are built completely separately,” Masters said.

The USTFCCCA rankings as of Feb. 11 pegged the men as the No. 1 in the MIAA. For the women, they sit behind Southern as the second-best team in the rankings.

Masters believes that Northwest is somewhat a mix of both depth and talent and, in some ways, mirrors the teams that Southern and Lincoln are. With continued hard work and team unity, Masters said, the Bearcats will be the ones left standing atop both the men’s and women’s sides.

“If we have that mentality and we see the team support each other like we do, then other teams will wilt and we will have a chance to win,” Masters said.