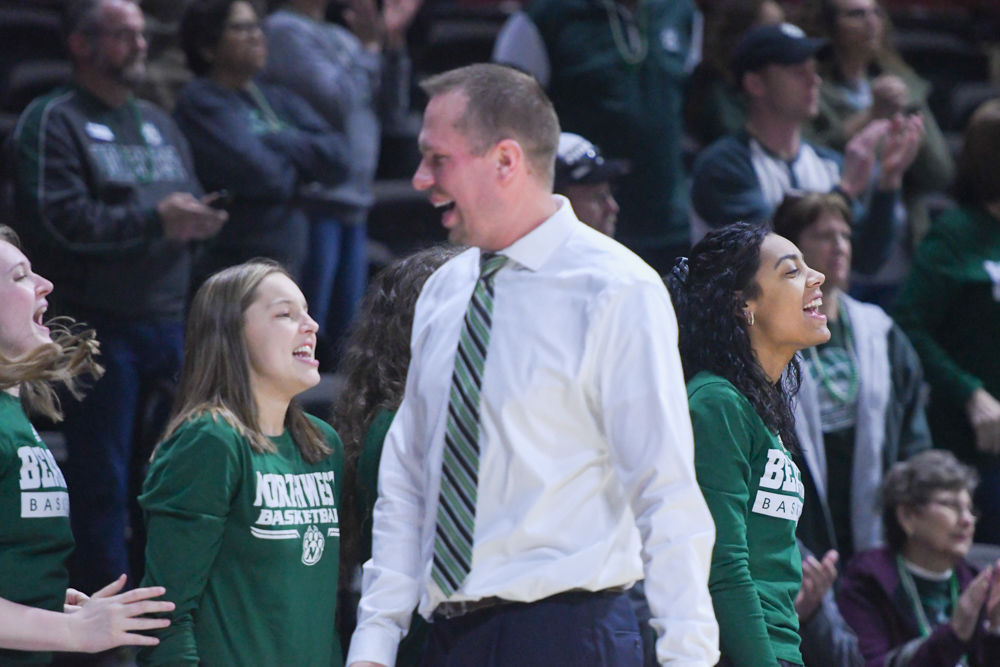 In the aftermath of Northwest women's basketball's 71-67 win over Central Oklahoma March 4 in Kansas City, Missouri, coach Austin Meyer celebrates with the bench. The Bearcats return to Municipal Auditorium March 5 for the second round against No. 2 Emporia State. 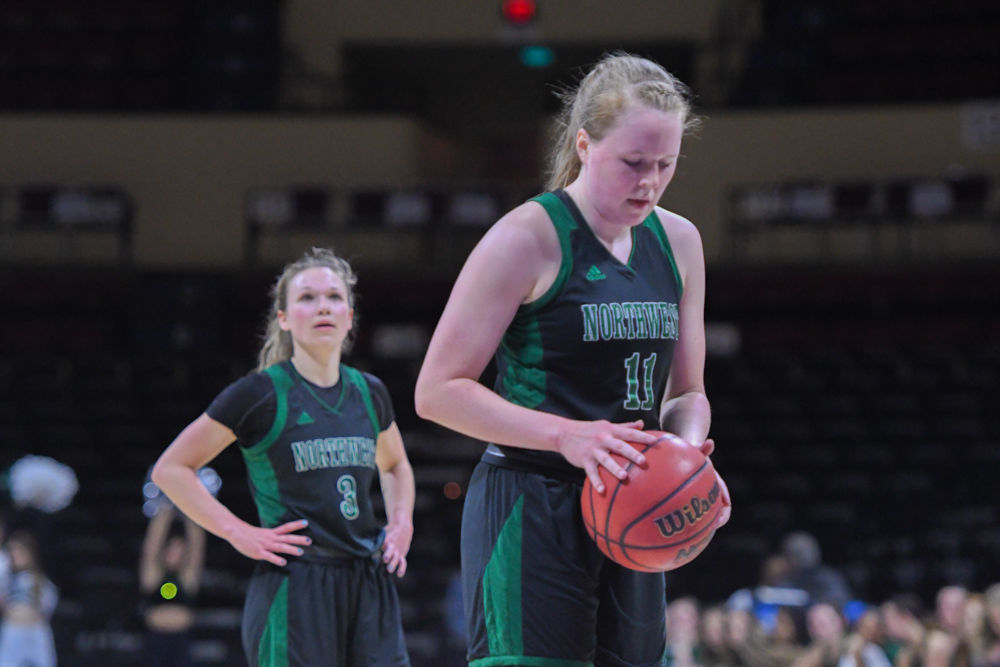 The junior had been at the charity stripe 216 times in her collegiate career before that moment, 70 of those during the 2019-20 season, none of them carried the significance of the pair that were ahead.

With 19 seconds left, No. 10-seeded Northwest led the No. 7 seed, Central Oklahoma, by a single point in the first round of the MIAA Tournament.

“It’s awesome to be able to come to the tournament,” McConkey said. “None of us were wanting to come in just to get in the tournament and then lose our first game. So I mean, we’re planning on staying here for a while.”

That moment was a culmination of every moment prior, in some ways, serving as a depiction of a game in which both teams led by double-digits at one point or another. For Northwest, the win was the first of its kind since the 2012-13 season, the last time the Bearcats won a game in the conference tournament.

Northwest was led by sophomore guard Jaelyn Haggard, who scored a game-high and new season-high 22 points. With 2:26 left in the first quarter, the Bearcats trailed 18-7. Haggard nailed a 3-pointer nearly 40 seconds later, one that set Northwest on an 18-0 run that carried over into the second quarter to give the Bearcats a 25-18 lead with 7:45 left in the first half.

“We were confident coming into this game,” Northwest coach Austin Meyer said. “We struggled to start offensively, but we were kinda our old selves defensively and it kept us in the game and allowed us to take the lead when we made that run.”

It was the Bearcats’ first game in March since 2014, when they were bounced in the first round of the postseason. Before the win over Central, Northwest hadn’t made the tournament since the 2016-17 season. After losing the last six games of the regular season, the Bearcats weren’t sure if they’d be participating in what the conference calls “MIAA Madness.”

In the aftermath of the win, Haggard’s first triple of the game served as an indicator of the remaining three quarters that she had. She shot 6 for 10 from the field, including 5-for-9 shooting from deep.

At the 4:11 mark of the final quarter, Haggard nailed a three from the corner to give Northwest a 63-55 lead. It was a shot that cemented the junior into the Northwest record books as she passed former Bearcat Kelli Nelson to become the program’s leader in 3-point field goals made (203).

Shooters shoot! Just taking after a stud herself - thank you!!

After the game, the junior wasn’t aware she scored 22 points. She wasn’t aware that she had set a new program mark. She wasn’t concerned that she was on the bench when the game tipped off. She was, however, focused on the fact that they survive to see another day in the tournament.

“I didn’t have that goal by any means,” Haggard said. “At the end of the day, it doesn’t mean much because we’re here to compete and it’s just an accolade. To me, it is what it is.”

“I just want to add that I’m not shocked at all,” McConkey joked. “She’s coming in and hitting, what? Four threes a game? It’s no big deal.”

The Bearcats, Haggard said, were due for an appearance in the tournament. It’s something that nobody on the current roster has experienced in their time at Northwest. The seniors, guards Kendey Eaton and Erika Schlosser, are both in their second year with the program after transferring in.

The junior class, consisting of Haggard, McConkey, and four others, was a part of 13 wins combined in the first two years as a Bearcat. The Bearcats are, of course, one win away from matching that total in the span of one season.

“We’ve been waiting our turn for the last few years,” Haggard said. “Just, finally getting our chance to be here — I truly believe we were placed here for a reason.”

The experience, Meyer said, is good for the program. But, he added, the Bearcats didn’t make the trip to have it be one that is short-lived.

Northwest gets an opportunity to upset another team when the Bearcats square off against the No. 2 seed, Emporia State March 5 in Kansas City, Missouri, at Municipal Auditorium. It’s a matchup in which the Bearcats lost in the only meeting between the two during the regular season.

“I mean, I’m pretty excited about it,” McConkey said. “I know we had a tough battle today and we’re gonna have another one tomorrow so, we gotta get physically and mentally ready for the next game.”

“They’re really good,” Meyer said of Emporia. “They’re the No. 2 seed in the tournament for a reason. … It’s gonna be a big challenge, just like today was, but our kids will be ready.”