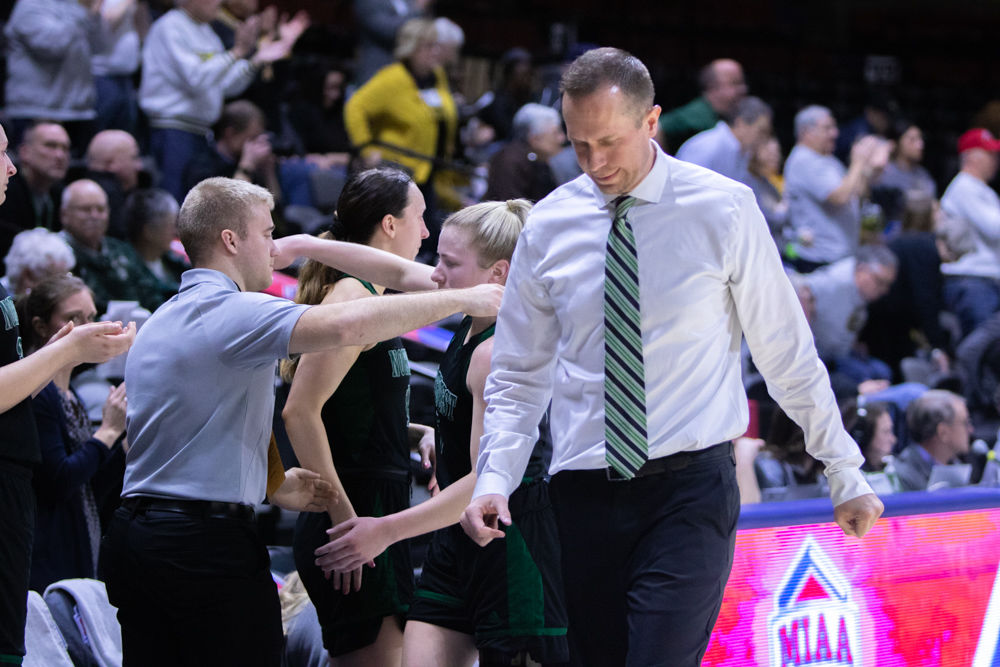 Northwest women's basketball's second-year coach Austin Meyer trots down the sideline March 5 in Municipal Auditorium as the final seconds tick off of the clock in the Bearcats' 80-52 loss to Emporia State. 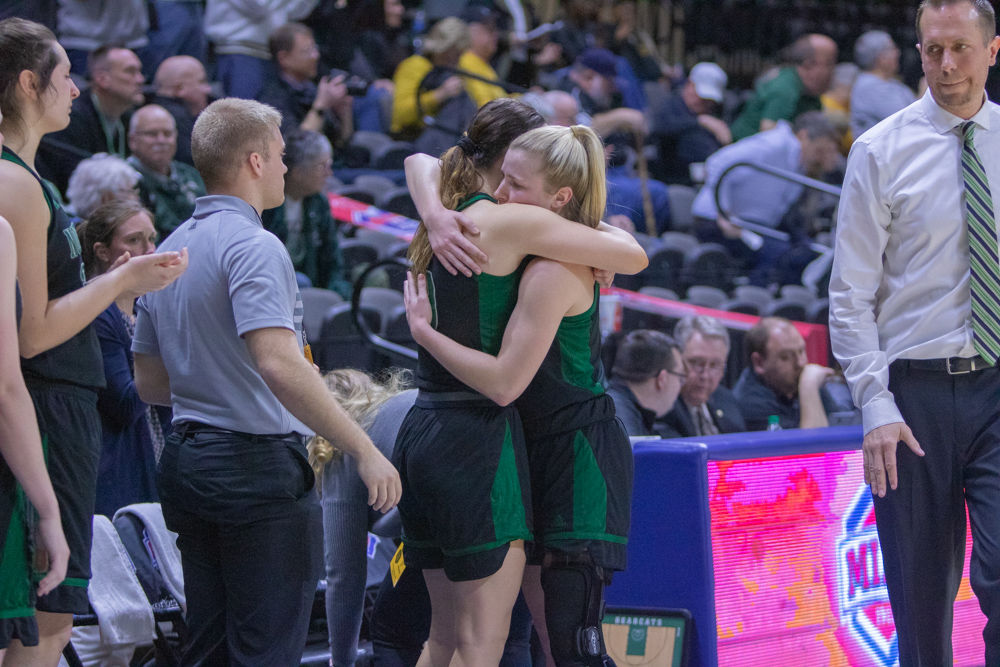 Northwest women's basketball senior guards Erika Schlosser and Kendey Eaton embrace in the aftermath of the Bearcats' 80-52 loss to Emporia State March 5 in Kansas City, Missouri, at Municipal Auditorium. The loss served as the end to the women's season.

KANSAS CITY, Mo. — After the final buzzer sounded, Erika Schlosser met with her team and then proceeded to a room that lined the upper-deck inside of Municipal Auditorium for what was Northwest women’s basketball’s final postgame press conference of the season.

She sat in between her coach, Austin Meyer, and one of her teammates, senior guard Kendey Eaton. Amid Meyer’s opening statement, Schlosser sat in front of a group of reporters on the verge of tears.

For Schlosser, the senior guard, an 80-52 loss to Emporia State March 5 in the MIAA Tournament Quarterfinals marked the end of her collegiate career.

“I mean, obviously, it’s not a good feeling,” Schlosser said about the loss. “The last few minutes, even when the clock is counting down you’re just kind of like, ‘Wow. This is it. Like this is really over.’ After the game finished, I was sitting in the locker room and I looked down at my shoes and was like, ‘I don’t really wanna take these off.’ It’s just a weird feeling.”

“It kinda hurts at this point,” Eaton said. “I’m sure give me a couple hours and I’ll be really thankful. Really thankful for all the opportunities and memories with this team.”

The game was one that the Bearcats, on paper, shouldn’t have made it to. After losing the last six games of the regular season, they were pegged as the No. 10 seed in the MIAA Tournament. In the first round, March 4, the Bearcats (12-18) upset the No. 7 seed, Central Oklahoma, with a 71-67 triumph.

The matchup with Emporia (23-6) was one that served as an outlier for the Bearcats, an uncharacteristic performance on both ends of the floor. It was in part due to the stifling defense that the Hornets presented. The challenge presented itself in the form of a full-court press from the start of the game, one that threw the Bearcats out of sync for the better part of all 40 minutes of action.

Throughout the season, Northwest lived on the perimeter with its shooting from beyond the arc. When the Bearcats found success from outside, they typically won. When the Bearcats shot 9-for-27 (33%) from deep against Emporia, it was low enough of a mark to kill any hope the they had of extending their season.

Northwest was led by freshman forward Paityn Rau, the lone Bearcat that scored double-digits, all of which came in the first half. Northwest scored 9 points in the first quarter as opposed to Emporia’s 21. The Bearcats allowed 22 points off of 17 turnovers.

“Gotta give (Emporia) credit,” Meyer said. “We weren’t overly fundamentally sound early on in the game. … We just had too many fundamental mistakes against the pressure. But they’re really good, that’s partly the reason they’re the No. 2 seed in the tournament.”

On the opposite end, the Bearcats struggled to stop the Hornets’ offensive production. Northwest gave up its second-highest point total of the season to Emporia (83, Washburn 2/25). They allowed a career-high 30 points to Emporia’s senior forward Mollie Mounsey.

The Bearcats have struggled at times throughout the season, one issue arising at a time. Against the Hornets, the issues were in the offense, coupled with the defense that Northwest hung its hat on for the 29 games prior to the one that ended the season.

“I think we just weren’t being us,” Schlosser said. “We pride ourselves in our defense, so I think that was — we just kinda faded away from that.”

“I don’t think we didn’t compete,” Meyer said. “As good as we were defensively yesterday, I just didn’t think we were as good. It wasn’t that we weren’t out there competing.”

The loss served as the last chapter to the story that was one of the best seasons for the women’s program since the early 2010s, when the Bearcats appeared in the NCAA Division II Women’s Final Four.

The 12 wins are one shy of matching the win total for the previous two seasons combined. It was the first trip to Municipal Auditorium for the program since 2013, along with the first win in the MIAA Tournament since that same season.

This isn’t where the program aspires to be, Meyer said. It isn’t how they wanted to finish the season, he added. However, he said, it’s a step in the right direction.

“We have to look at where we’re coming from,” Meyer said. “We’re a program that three years ago, won three games in the league. … So obviously, we want to be better — you always want to be better. But it is a growth mindset of just getting better every day and I think our kids have done that. I’m proud of where we’re at.”

“We’re confident cause of the kids we have, staff we have, that our program’s going in the right direction,” Meyer said. “We’re just gonna take a little time off and then get back to work.”

For Schlosser and Eaton, there’s an infinity of time off. The duo will never play another game as a Bearcat. Their time with at Northwest aligns with Meyer’s time at the helm, time that brought Northwest 20 wins across two seasons.

Eaton overcame injury during the middle of the 2019-20 season, in which she was absent for five games.

Schlosser started in every one of the 58 games during her two years as a Bearcats.

In the aftermath of the loss, in that press conference room at Municipal Auditorium, the duo reflected on the memories that they’ll have in hand with a formal departure of the program.

“When we say we’re a family at Northwest, you kind of just wonder about it,” Eaton said. “Once you’re a part of it — it’s just crazy — we’re really a family and love each other and it’ll be a hard thing to lose. I’ll miss it.”