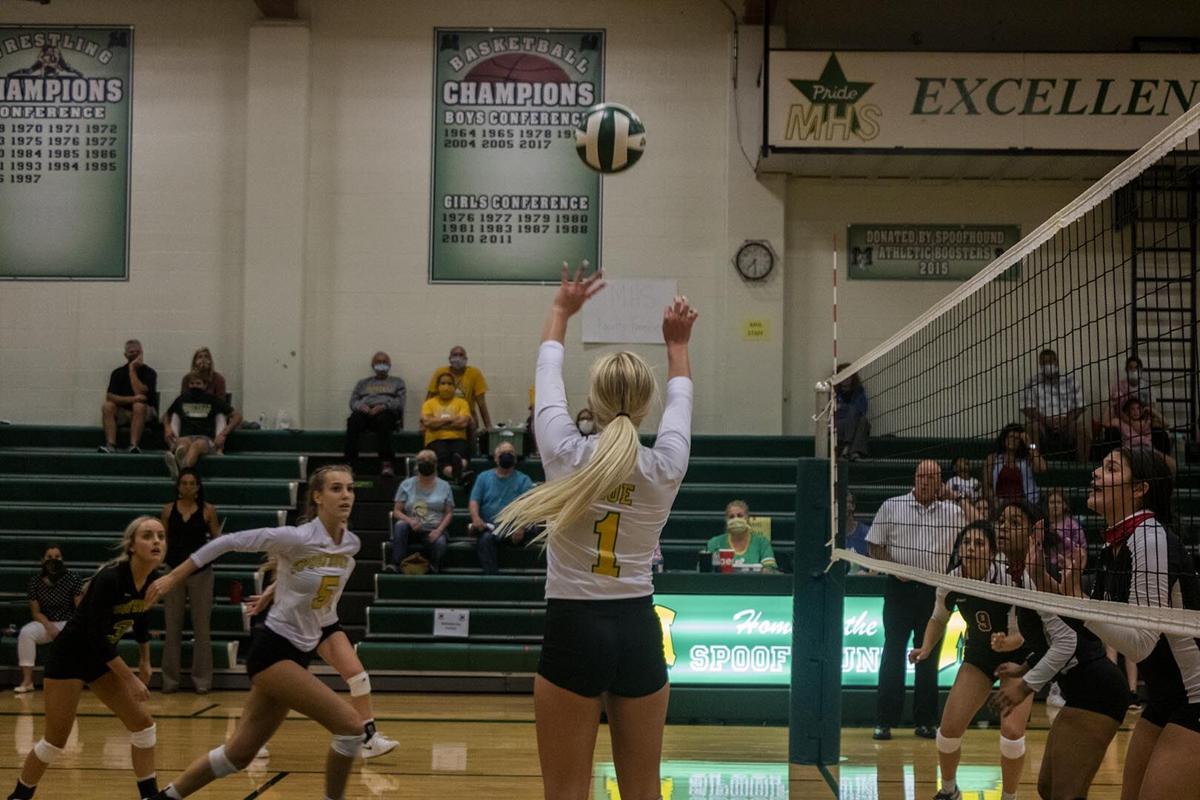 During the second match, senior Macy Loe sets a ball to teammate senior Serena Sundell to score another point for Maryville volleyball. The Spoofhounds ended up winning the first two matches and eventually the third, sweeping Benton 3-0. 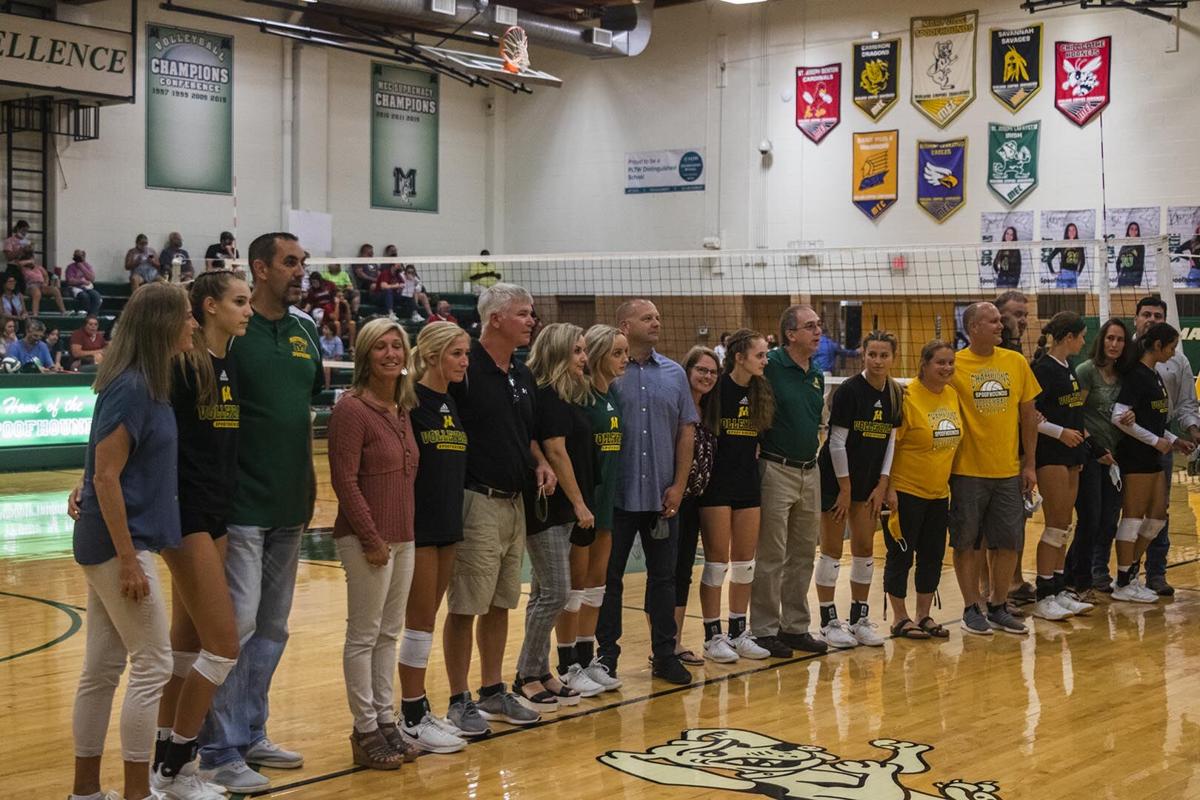 Before the start of their game, the Maryville seniors from the varsity volleyball team walked out with family at their sides to kick off their Senior Night. Each player was introduced and all participating families gathered for a photo before warm ups began. 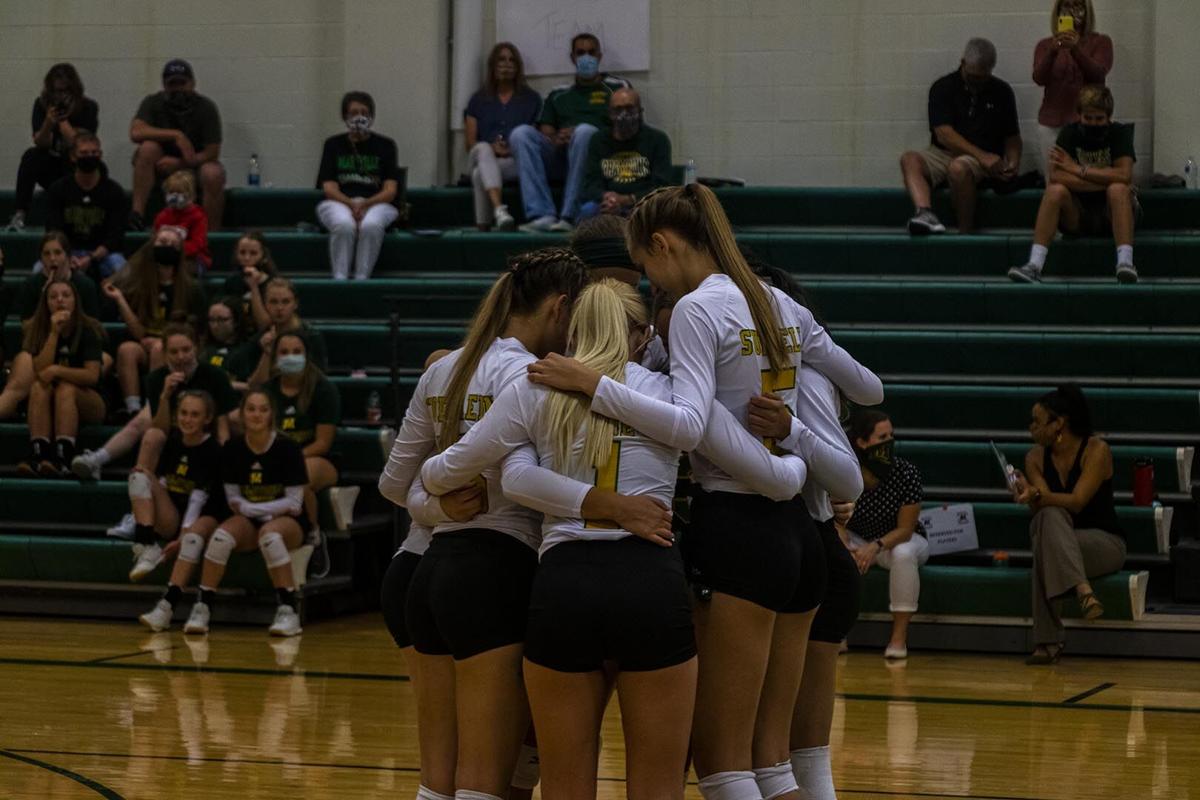 Ahead of its season debut against Benton Aug. 31 in the 'Hound Pound, Maryville volleyball huddled, which is a pregame routine for the team. The Spoofhounds swept Benton 3-0 to avoid opening the 2020 season with a loss.

In a rather atypical fashion, Maryville volleyball set Senior Night as the first game of the season, in which the Spoofhounds swept Benton Aug. 31 in the ’Hound Pound.

In the midst of a pandemic, the atmosphere in the gym showed a change, as only select family members are allowed for each athlete. It took three sets for the Spoofhounds to close the deal, and they were led by senior outside hitter Serena Sundell and senior libero Klarysa Stolte.

Before the first game of the season, second-year coach Miranda Mizera felt her team was prepared to get things rolling.

“We have been focusing on our side of the net,” Mizera said. “The team is made up of seven seniors and things are coming natural to them as they understand what it takes to be a successful team.”

Maryville was off to a hot start in the first set, scoring the initial three points of the match before Benton got on the board. Despite seeming out of it, Benton forced Maryville into a timeout after bringing the score to 12-8. Sundell led the way in scoring with back-to-back spikes in the first set.

The defense was led by Stolte in the back court. With many digs and serves, she was able to set her team up to score. The ’Hounds finished the first set with a winning score of 25-17.

Going into the second, there was a much different Cardinal team on the court. It was a back-and-forth score with Benton getting its first lead of the match 5-4. Eventually, the ’Hounds closed out the second set 25-18.

Coming into the third set, Maryville appeared to lack the energy that it brought to the first two.

Halfway through what was the last set of the night, a complication occurred on the court.

Mizera was in the middle of a conversation with Stolte on the side of the court when a mirage of whistles filled the gym at Maryville High School. The official motioned for a point to be deducted from the Spoofhounds and that same point be given to the Cardinals.

Despite the uncertain mishap, Maryville completed the sweep by winning the set 25-21.

The Spoofhounds, Mizera said, are starting to see who is stepping into leadership roles.

“Leadership is coming with time,” Mizera said. “The girls were able to see it from the seniors in the past.”

Stolte’s thoughts on the night were that she was excited for the opportunity to play during the global pandemic.

“It was great to get both a Senior Night and a full game, as that’s questionable these days,” Stolte said. “We lost one of our starters to contact tracing only three hours before the game, so it was a blessing to have the opportunity to play.”

Stolte said they were looking forward to working towards future games and improving on what was set in place on opening night.

“We’ve got some communication issues that will come with using a rotation we're not used to, but we’re ready to work for a better flow,” Stolte said.

Stolte and the rest of the Spoofhounds will get another chance to work on things when they play host to East Buchanan at 7 p.m. Sept. 3 in the ’Hound Pound.