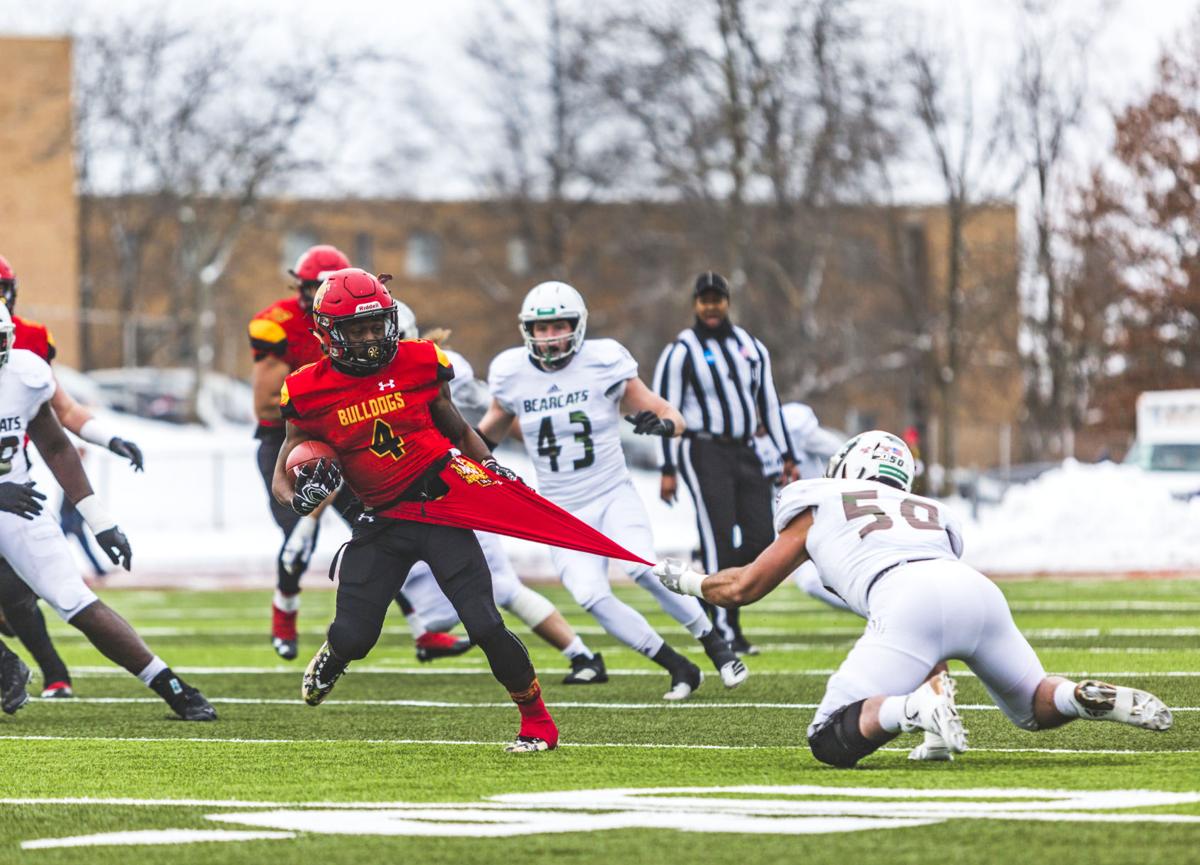 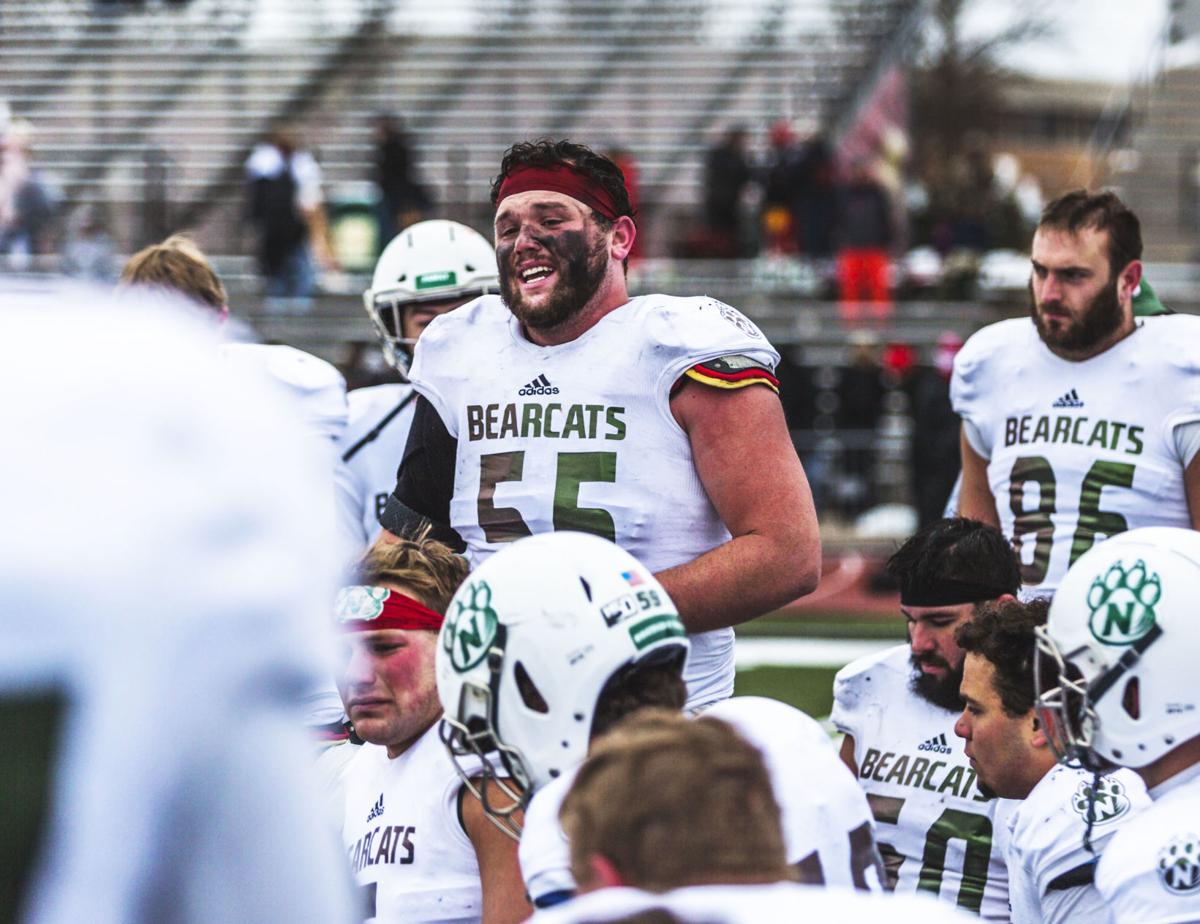 Senior defensive end and MIAA Defensive Player of the Year Spencer Phillips speaks to his teammates in his final postgame huddle Dec. 7 in Big Rapids, Michigan where Northwest lost 25-3 to Ferris. 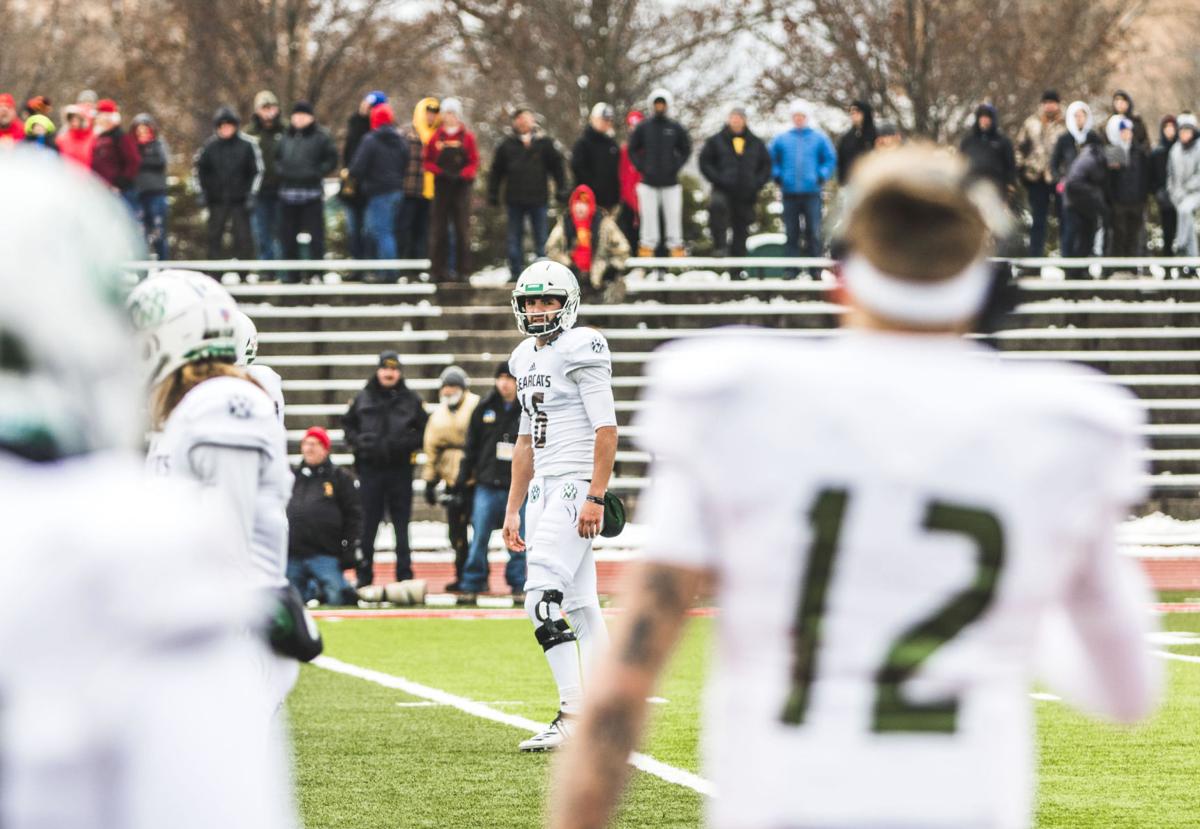 He wore a compression sleeve on the throwing arm he wouldn’t use again. He warmed his hands in a pocket attached to his uniform that rested beneath his back. He traded his helmet for a headset to help direct and coach his replacement, junior Jadyn Kowalski.

The Bearcats were trailing Ferris State 10-0 when their sophomore starting quarterback was benched. They would go on to lose 25-3 in the NCAA quarterfinal matchup, ending their season in Big Rapids for the second time in two years.

“I was a little bit of a combination of things,” Northwest coach Rich Wright said. “Braden wasn’t overly effective but he had tweaked his knee in practice during the week and (we) just felt like Jadyn gave us a shot to win. That was the ‘why.’”

The shot to win remained elusive. With Braden Wright on the field in the first half, Northwest’s offense took the field for nine possessions and punted on six of them. The Bearcats turned the ball over twice and watched the clock tick to zero on their ninth drive of the half. They never reached the red zone.

Northwest’s first half was defined more by its stalled drives than its defensive stands, though the defense kept the Bulldogs in check for most of the first two quarters. In Ferris’ final possession of the first half, the Bulldogs drove to Northwest’s 8-yard line. They rushed three times with senior running back Marvin Campbell for six yards. They sat two yards away from the endzone on fourth down, two yards away from carrying a 10-0 lead from the Big Rapids turf and into their home locker room.

With 19 seconds left on the clock, Ferris coach Tony Annese took a timeout to mull its fourth-down decision over. The Bearcats followed up the stoppage with two timeouts of their own.

“Well, we had enough time to decide what we wanted to run, right?” Annese said. “We changed four times.”

The Bulldogs settled on a run up the middle, utilizing Campbell for the fifth consecutive play. The running back failed to penetrate Northwest’s defensive front, falling 1-yard short of the goal line and turning the ball over on downs.

“Whatever the strongest wall in this structure is,” Annese said on the third floor of the press box at Top Taggart Field, “you might as well just run into that and that’s what you’re running into against Northwest Missouri State’s D-line.”

The play depicted the dominance of Northwest’s first-half defense, a unit that held Ferris State to 3 points in two quarters and to a 1-of-9 mark on third-down conversion attempts. The play carried the Bearcats into the locker room with their first sense of momentum of the afternoon. The play extended and enhanced hope for a Northwest comeback bid, hope that would dissipate over the next 30 minutes of football.

Ferris opened the third quarter with a 76-yard touchdown drive capped off by a 3-yard keeper from senior quarterback Travis Russell. The run, coupled with the point-after banked by senior kicker Jackson Dieterle, gave the Bulldogs the same 10-0 lead the Bearcats had kept them from 18 minutes prior. The score served as the groundbreaking on what would become the gravesite for Northwest’s season.

On the heels of the game’s first touchdown, Northwest’s offense took the field and handed the ball to senior running back Justin Rankin for a 1-yard gain. Braden Wright rushed the ball on the next play himself for a 4-yard gain.

On third and five, the quarterback rolled to his right and fired in the direction of junior wideout Alec Tatum. The pass bounced well-short of the wide-receiver. Braden Wright winced and jogged toward the sideline where he was met by co-offensive coordinator Charlie Flohr. The sophomore finished his conversation with the coach and removed his helmet. He wouldn’t need it for the rest of the season.

“Did I expect it? Uhm, no, not really,” Annese said in regard to Kowalski’s presence on the field. “I was surprised by that. I was surprised.”

In Northwest’s 10 drives quarterbacked by Braden Wright, the team never scored. He finished the game with six completions on 16 attempts. In his place, Kowalski led the Bearcats on a 57-yard scoring drive capped off by a 27-yard field goal off the right foot of junior placekicker Parker Sampson.

“We practice for these situations all the time; coming into big games and playing in big situations and stuff like that,” Kowalski said. “You don’t really pay attention to how big of a game it is, it’s just, you go in there, do your job and try to be efficient.”

Following the moderate success that came with Kowalski’s first drive, he was anything but efficient. In Northwest’s seven drives after its only score of the game, the junior completed 33% of his passes and the offense netted 11 total yards over the game’s final 20 minutes. The Bearcats managed two first downs in the entire second half.

“I’m just extremely disappointed, especially seeing all the faces of the seniors who put five years into this program and then come up short like this,” Kowalski said. “(I’m) just disappointed. Feel unaccomplished.”

The offense’s own ineptness kept the unit sidelined for much of the second half, watching.

The offense watched as Dieterle kicked two field goals in the 15 minutes following Northwest’s loan scoring drives, giving Ferris a 16-3 lead and leaving the Bearcats with 6 minutes and 38 seconds left in their season. Northwest’s offense did nothing in the in-between to counter the Bulldogs’ persistent kicker. The unit managed two first downs in the second half.

Perhaps the last ounce of hope for Northwest was punted away off the right foot of redshirt freshman Mike Hohensee. With 4 minutes and 50 seconds left in the game, facing a fourth and eight and a 13-point deficit, Northwest sent Hohensee to punt with the season’s final minutes ticking away. Ferris State’s next drive would eat 101 seconds off the clock, leaving the Bearcats with three minutes and nine seconds to score twice.

“Yeah,” Rich Wright said of the decision to punt. “I stand by that.”

Northwest’s offense got the ball back at its own 8-yard line. The Bulldogs sacked Kowalksi for a safety on the first play of Northwest’s last meaningful drive, giving Ferris an 18-3 lead and effectively ending Northwest’s season. Hope, by then, had dissolved from fleeting to faded.

Northwest attempted an onside kick in the aftermath of the safety, one the Bulldogs recovered on the Bearcats’ 33-yard line. Hope, by then, was gone.

Ferris State would add an exclamation point on its quarterfinal performance with a 32-yard touchdown run from Campbell moments later, icing the game for the Bulldogs and the season for Northwest with its offense perpetually sidelined.

The play served solely as an accent mark in a game Northwest still would have lost without it. It helped end a contest in which the Bearcats were dominated on both sides of the ball. It helped end a 12-win season in the third round of the postseason, a campaign that stretched into December and still ended in disappointment. And it helped end the careers of 17 seniors.

“I’m disappointed, obviously, for our senior class,” Rich Wright said. “It’s hard if you’ve never been in a locker room when kids have invested so much in a five-year timespan, to have them come to the realization that their college football career is over. That’s a difficult thing.”

Rich Wright walked up three flights of stairs inside Ferris State’s press box and apologized to reporters for his tardiness with tears in his eyes. He had been hugging seniors whom he had coached for the last five years. He had been talking with their parents, with whom he had built relationships. He had been trying to counsel a group of players whose season had just ended in Big Rapids, again.