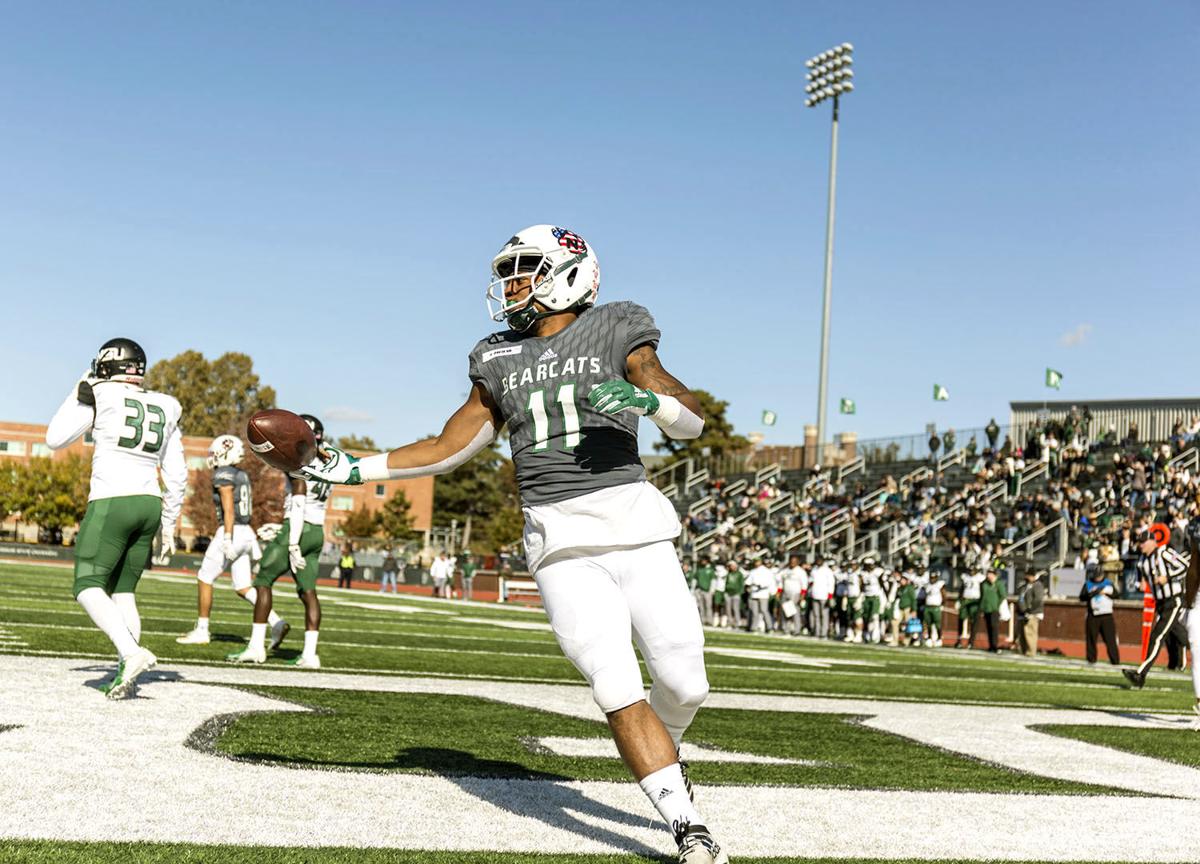 Northwest senior running back Justin Rankin scored four touchdowns and rushed for a career-high 211 yards on 12 carries in the team's Nov. 2 win against Northeastern State at Bearcat Stadium. 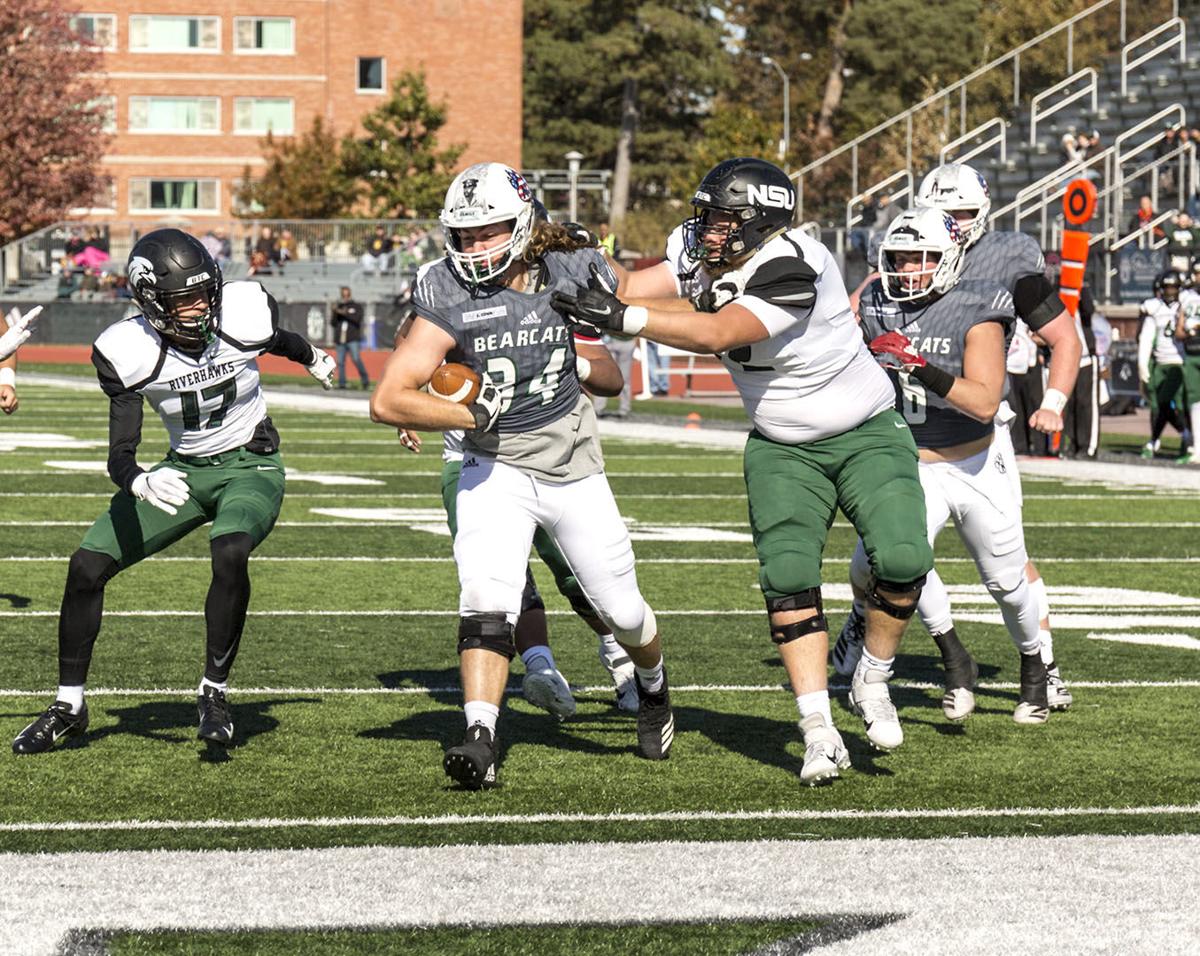 Senior defensive end Mike Ehlke retrieves a fumble Nov. 2 at Bearcat Stadium against Northeastern State and scores an 18-yard touchdown, the first of his collegiate career.

Northwest senior running back Justin Rankin scored four touchdowns and rushed for a career-high 211 yards on 12 carries in the team's Nov. 2 win against Northeastern State at Bearcat Stadium.

Senior defensive end Mike Ehlke retrieves a fumble Nov. 2 at Bearcat Stadium against Northeastern State and scores an 18-yard touchdown, the first of his collegiate career.

As Northwest football approaches the final two weeks of its season, and with it, the toughest two games on its schedule, the Bearcats have a choice to make.

They can win against Fort Hays State (7-2) Nov. 9, keeping No. 12 Northwest’s postseason intentions realistic and setting the team up to battle for a share of the MIAA Championship with Central Missouri. The team could even host a playoff game if the chips fall in order.

Or the Bearcats (8-1) can lose to the Tigers for the third year in a row, leaving Hays, Kansas, with their conference title hopes in peril. If things go awry in Hays, it could potentially eliminate any thought of the postseason, leaving the Bearcats out of the playoffs for the first time since 2003.

For Northwest, everything remains on the table. A win against the Tigers would, at the very least, help the Bearcats tread water in a close conference race, perhaps breathing life into the team ahead of a Week 11 matchup. A loss would tie an anchor to Northwest’s feet.

He knows Fort Hays is the only team in the MIAA he’s yet to beat in his first three seasons, something the coach said he’s not worried about. And he’s aware of the conference and playoff implications that will inherently come with the matchup with Hays. That’s why Wright said it’s fair to call Northwest’s Week 10 contest the biggest of its season.

“Very fair,” Wright said. “But at the same time, they’re all big because of what our expectation levels are. I mean, we treat every game the same. But you’re at the end of the season and you’re playing for something. … We’re in the final two games. We have to play well.”

Northwest’s next matchup with Fort Hays could define its season. Its last two matchups with the Tigers were defined by mistakes, ones Wright recalled in some detail in front of a group of reporters at Northwest Athletics’ media luncheon Nov. 5.

“You’re gonna hear a redundancy of words, but it’s details,” Wright said. “A missed extra point, roughing the punter, turnovers. … We’ve been right there, you know. (The) personal foul in 2017 when we’re driving down the field to kick a field goal — those are all those things that show up in high-stress and high-pressure games, and those are the things that we have to focus on this week.”

The stage, of course, is set for the biggest game of both team’s seasons. Northwest, Wright said, is embracing a rare underdog mentality in its trip to Hays. The Bearcats haven’t beat the Tigers since their last trip to Hays in 2016, losing two in a row at Bearcat Stadium, both with shares of the MIAA title on the line.

The last two matchups were close, Wright said, and they went down to the wire. But the Tigers won, the Bearcats lost, and Wright is championing his team, one with a superior record, as the underdog.

“It kind of goes to an ‘us against the world’ kind of mentality,” Wright said. “They’re the favorite; we’re the underdog. They’ve won the last two years. We’re going to go out and give it our best shot. You know, we don’t have anything to lose, and that’s the mentality that we have to attack it with. … You can either be intimidated by it or you can relish in it, and to me, I’ve been here for 16 years, and those are the fun games to go play in.”

The upcoming contest in Hays seems destined to come with a playoff atmosphere, Wright said. For fifth-year senior defensive lineman Zach Pierce, games like the one awaiting the Bearcats in Kansas are the reason he came to Northwest.

In his first career start against Northeastern State Nov. 2, in Northwest’s dominating 79-0 win, Pierce recorded four tackles, one sack and forced a fumble, helping the defense hold the RiverHawks to 130 yards of offense in the game.

Pierce said he’s excited to play for Northwest every time he gets the opportunity, that in-game action is what he looks forward to. But the chance to play in big-time games is why he’s here.

“From high school, my coach always said, ‘Go somewhere you’re going to win,’” Pierce said. “I came on (a) visit here … and I just remember, we walked out of Lamkin, out on Bearcat Field, and (then-coach Adam Dorrel) showed us the wall. And it was just — it was like mesmerizing, it was just crazy, all the history. Every single day at practice, it’s just a great reminder of the tradition that we’re fighting for.”

The tradition itself isn’t on the line against Fort Hays Nov. 9. The season itself might be.

Wright, who’s been a coach on Northwest’s staff since 2004, has never missed the postseason. He’s taken in hundreds of games over the last 16 years. He’s made a ton of memories. His favorite one against Fort Hays, he said, came in the 2015 Homecoming matchup when Northwest raced to a 35-7 halftime lead over the Tigers, who were still emerging as a power in the MIAA.

Wright’s tenure as head coach has been marred by near-misses against Fort Hays. He’d like to change that Nov. 9 in Kansas.