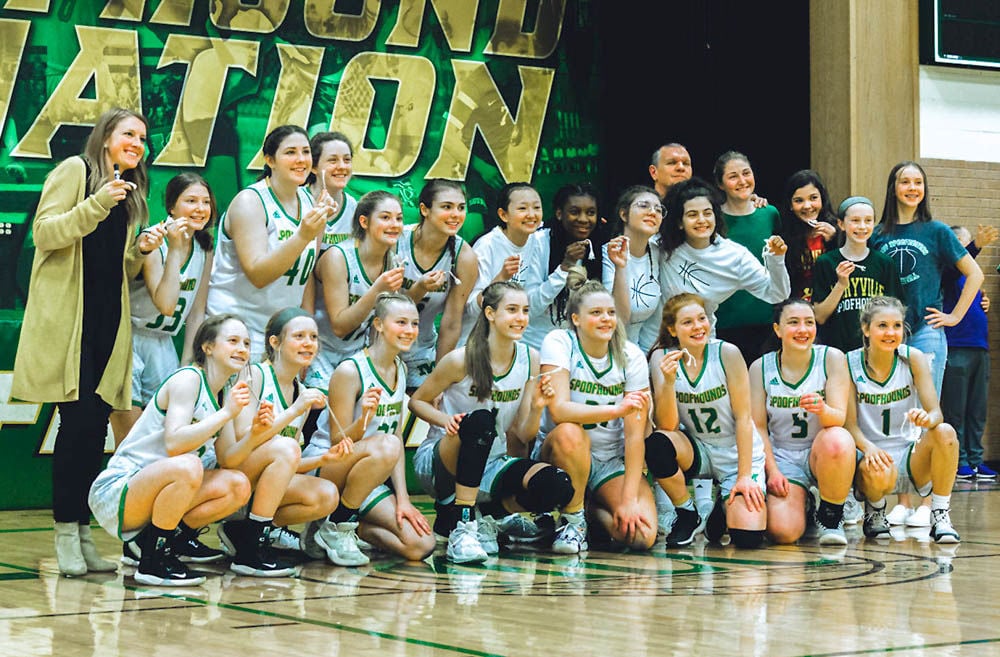 Maryville girls basketball celebrates after claiming at least a share of the MEC title in the aftermath of a 49-17 win over Savannah Feb. 20 in the Hound Pound. It's the Spoofhounds' first conference title in nine years. 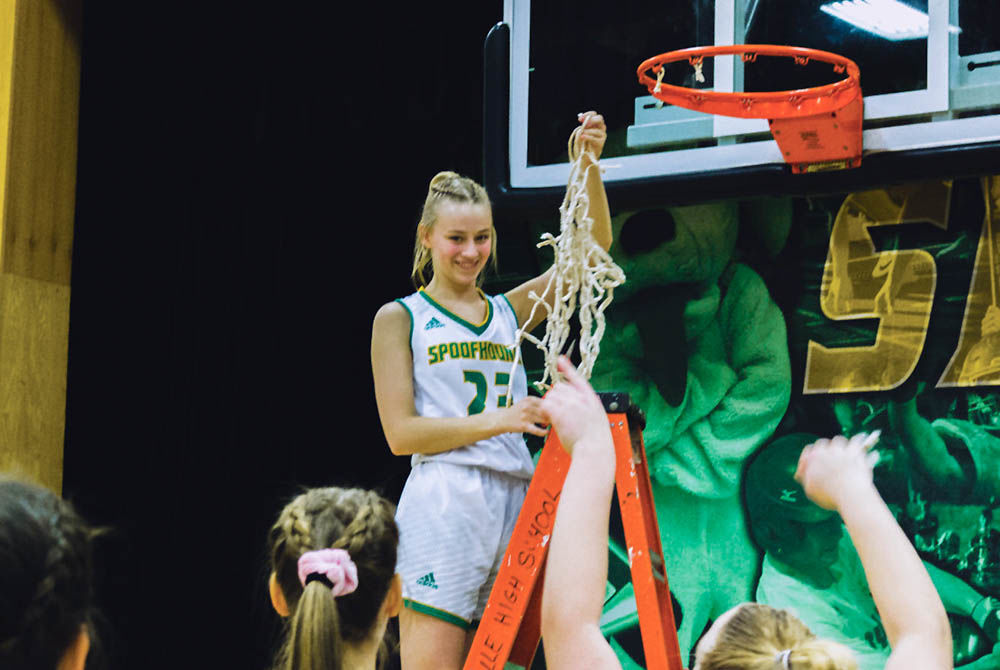 Maryville girls basketball celebrates after claiming at least a share of the MEC title in the aftermath of a 49-17 win over Savannah Feb. 20 in the Hound Pound. It's the Spoofhounds' first conference title in nine years.

Amid the high emotions that accompanied Senior Night, Maryville girls basketball claimed at least a share of the Midland Empire Conference title with a 49-17 win over Savannah Feb. 20 in the ’Hound Pound.

Following an electric overtime win for the junior varsity squad, Maryville (19-5) was amped up and ready to play. Coach Quentin Albrecht attributes some of the varsity’s success to how well the JV team helps them prepare for each game.

“JV works very hard and comes to every practice, they do all the sprints and get hardly any of the glory,” Albrecht said. “They are going to be big contributors to what we do here in the future.”

By the end of the first quarter, Maryville held onto a 16-5 lead, one that the Spoofhounds grasped for the entirety of the contest. Following a three-pointer from junior guard Serena Sundell, the Spoofhounds offense kicked into high gear. The team flared up on a 15-1 run and extended its lead to 25.

As the second quarter progressed, Maryville’s defense refused to bend. With a complete shutdown of Savannah’s offense, the ’Hounds took a 31-6 lead into the half. Sundell led all scorers with 22 points at the break.

“We’re very excited to go out and have a good defensive performance,” Albrecht said. “I just believe in some simple, fundamental, basic things defensively that we preach all the time.”

The second half of play served the same type of action; efficient offense followed up by stifling defense. However, freshman guard Rylee Vierthaler would foul out of the game with roughly four and a half minutes left in the third quarter.

Meanwhile, Serena Sundell broke the school’s single-season scoring record, which she held from the previous season. After raising her point total to 26 and her new record of 566, she exited the contest to sit for the rest of the game.

At the conclusion of the first three quarters, the scoreboard flashed a 43-13 score in favor of the ’Hounds.

As the remaining seconds in the fourth quarter ticked off the clock, they had no intention of stopping. A 49-17 lead meant a running clock for the game.

Those final seconds were counted off by the spectators in the ‘Hound Pound, each chant reverberating off of the four walls.

The seniors played out the remaining minutes of the game and senior guard Molly Renshaw brought the bench to its feet with a three-pointer late in the game. The Spoofhounds, of course, won, resulting in the announcer coronating the new queens of the MEC.

Maryville hasn’t won the MEC title in nine years. For Renshaw, it was a big deal to achieve such a feat.

“Wow, we really did it this year,” Renshaw said. “It just felt really good. It was really cool to finally get that and finally see that. I’ve never seen that before in any of my sports.”

The feeling of pride in the seniors is mutually felt between players and coaches. Before the 2018-19 campaign, the seniors hadn’t seen a winning season.

“These are girls that have been here for four years,” Albrecht said. “We’re excited for them that we can send them out with a win on their home court and give them the opportunity to cut down a net.”

In the aftermath of expressing the excitement of winning, Albrecht quickly switched back into his business as usual mindset. He said that these next couple of practices are the most important of the year because the team enters win or go home territory in the district tournament.

Albrecht believes that defense is a vital part of the ’Hounds’ game plan and is what helps them control their fate.

“We really hang our hat on our defense,” Albrecht said. “We feel that if we hold a team under 40 points then our chances of winning are really good.”

This season, Maryville has given up more than 40 points in each of their five losses and is 4-5 when the opposition eclipses that mark. On the other hand, the team is 15-0 when the defense stops opponents from reaching that 40 point barrier.

“This is not the time to be celebrating too much because our ultimate goals, we haven’t achieved yet,” Albrecht said.

“Nothing is given, that’s why the ball is thrown up every time,” Renshaw said. “With this win, it shows that when we’re happy and playing together we win championships.”