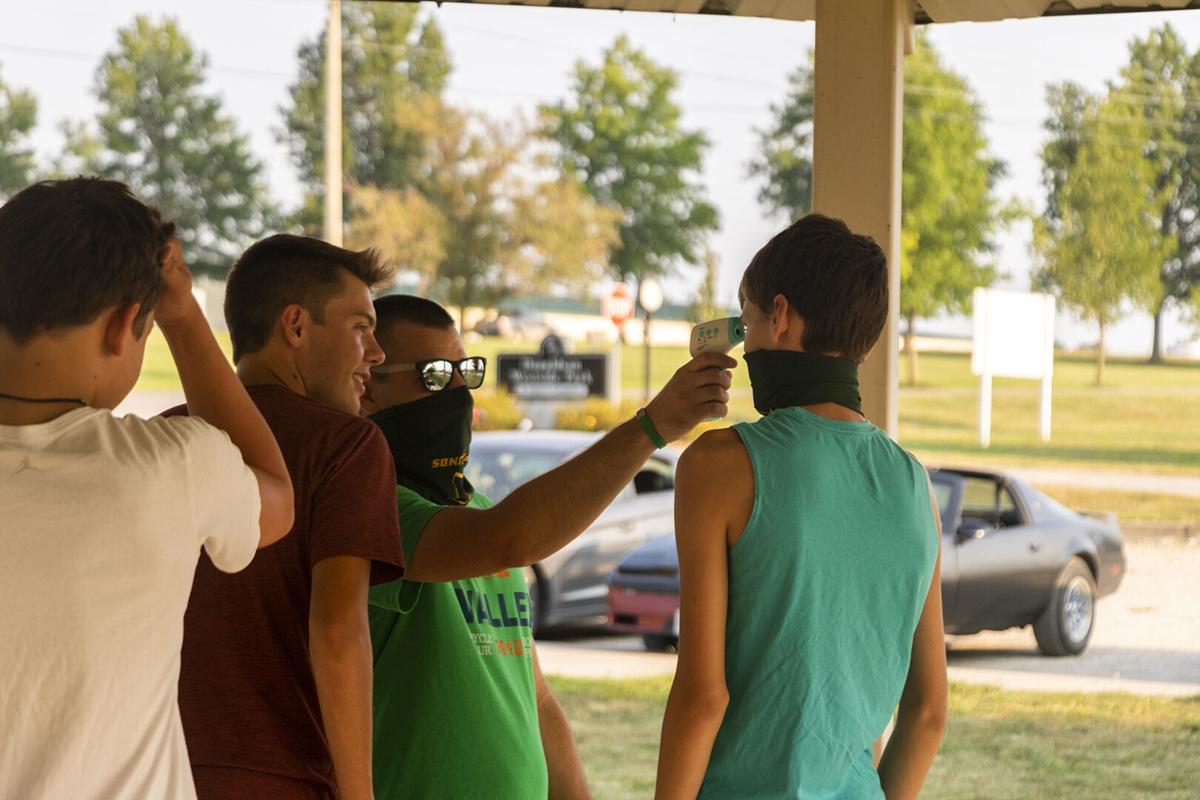 At the beginning of practice, Maryville cross country coach Rodney Bade checks runners temperatures as they show up. Bade has been holding practices for his students at their convenience. 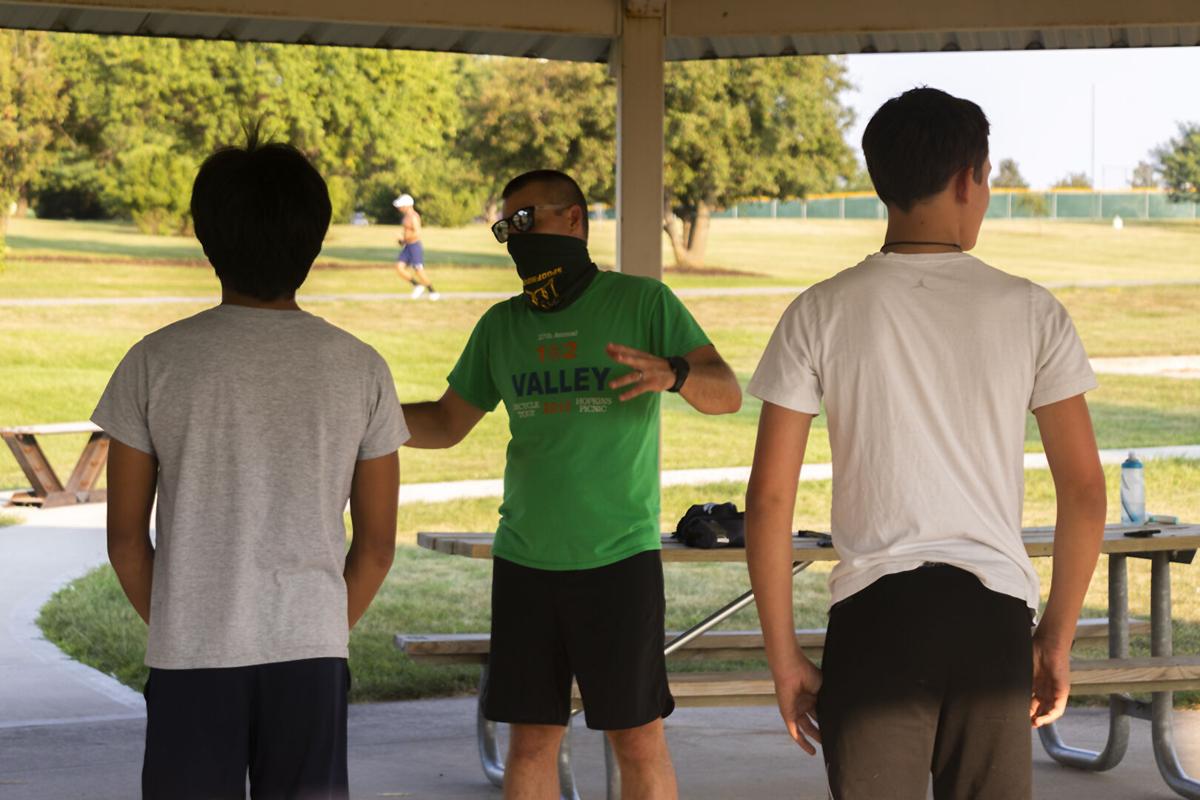 Maryville cross country coach Rodney Bade explains to his runners their route for practice. The cross country team has been practicing at 6:30 p.m. at Donaldson Westside Park instead of their usual time after school due to the heat index.

At the beginning of practice, Maryville cross country coach Rodney Bade checks runners temperatures as they show up. Bade has been holding practices for his students at their convenience.

Maryville cross country coach Rodney Bade explains to his runners their route for practice. The cross country team has been practicing at 6:30 p.m. at Donaldson Westside Park instead of their usual time after school due to the heat index.

Training amid a pandemic makes keeping track of athlete’s physical progression difficult for coaches. For Maryville cross country coach Rodney Bade, he’s found a way to keep up with his athletes without the need of face-to-face practices.

In a phone interview Aug. 15, Bade briefly mentioned how he utilizes a combination of Google Sheets and Garmin watches to virtually coach. He later elaborated on his coaching practices.

“We really encourage watches because, a lot of times, we’ll run for a certain amount of minutes,” Bade said. “Instead of trying to figure out whether they need to run 3, 4 or 5 miles, we’ll say some number of minutes. That helps them as far as they don’t necessarily feel like they have to run a certain number of miles that day.”

Not everyone on the cross country team owns a watch, but Bade highly recommends Garmin watches to runners. After tallying the number of ’Hounds with watches, six of his 10 runners possess a Garmin watch, while a few others own Apple watches.

Bade has no problems with his Spoofhounds not owning a Garmin, so long as a runner has a way to time themselves. Bade said that some watches have more capabilities beyond timing.

“If a kid wants to become a better runner, we encourage a running watch,” Bade said. “The basic one will do an average pace, distance and all kinds of stuff. The advanced ones do heart rate and cadence — how many steps per minute. Sometimes that information is important if a kid is overstriding.”

Due to compatibility issues, not all of the team is able to sync up to Bade’s online account and submit their running data. Bade said only three athletes do so on a regular basis. One athlete is senior Garrett Dumke, who explained what it’s like to have this capability during the pandemic.

“It’s great to send information to him that way,” Dumke said over the phone. “Him being able to go online and see our runs being transferred from our watches to our phone, and him being able to see how hard our effort was, gives him lots of information that he can see how we’re feeling and alter what workouts we’re about to do.”

Dumke said having a running watch has helped his process in becoming a better runner and keeping his pace steady during workouts. This is something Dumke said he has an issue with when not running with a watch.

“Typically, when I run, I go too fast,” Dumke said. “I mostly just use it to keep track of total distance and pace, making sure I don’t put too much effort in when I’m not supposed to.”

Even though Bade and Dumke can still connect workout data electronically, Dumke said it’s not the same running unsupervised as it is running in person for his coach.

“Nothing ever quite makes up for not having a coach there,” Dumke said. “It basically feels like summer or winter training. After practice, you were able to tell him if anything hurts or anything doesn’t feel right, he would help you stretch or roll it out. It takes more effort to text so it definitely makes it all easier having a coach there.”

COVID-19 has forced sports worldwide to accept a more virtual approach to training, and Bade’s methods are well adapted. The sharing of data works for his analytical approach to the sport.

His approach explains his encouragement towards his athletes utilizing running watches. However, Bade said, parts of his coaching methods are less emotionally driven than what he said they should be.

“I’m a pretty analytical person; that’s kind of my style of coaching,” Bade said. “I need to be a better motivator and probably a little more emotional. I’m sometimes a little too analytical and calm maybe, I guess you could say. That’s just the angle I take.”

Bade said the information gained from watches helps kids take ownership of their training, and that’s what he wants. For the kids who run with more emotion than Bade’s style offers, he said it’s harder for them to benefit from his analysis. The data he gets from them are snapshots of their run and not the full picture.

No matter what type of runner Bade coaches, he has one desire for them, and it isn’t to strap a clock around their wrist.

“I’m trying to encourage them to get that account and connect with me so that I can help them,” Bade said. “That’s the key I keep focusing on. I’m not trying to peak in on you. I’m trying to find things so I can help you be a better runner.”