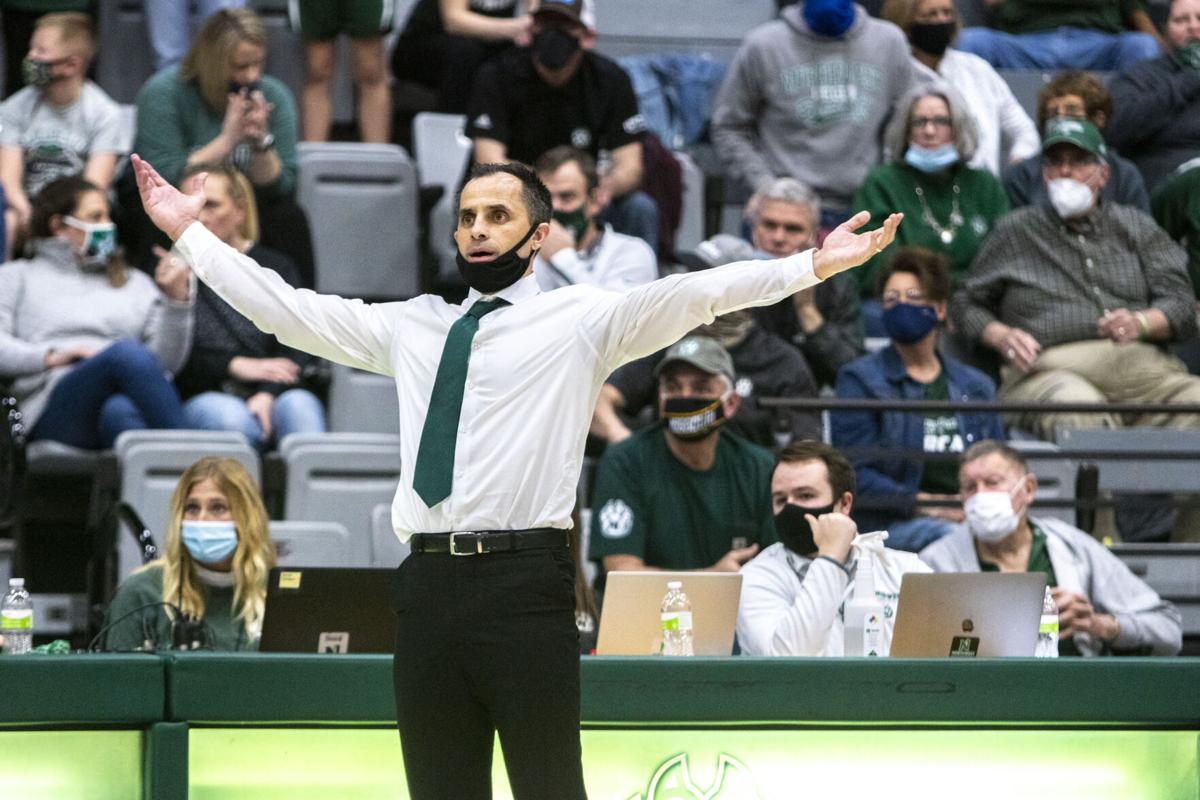 Coach Ben McCollum reacts to a foul call in the second half of Northwest men's basketball's MIAA Tournament Championship loss to Washburn March 6 in Bearcat Arena. McCollum said Northwest's play was "just terrible" in the first half of the loss. 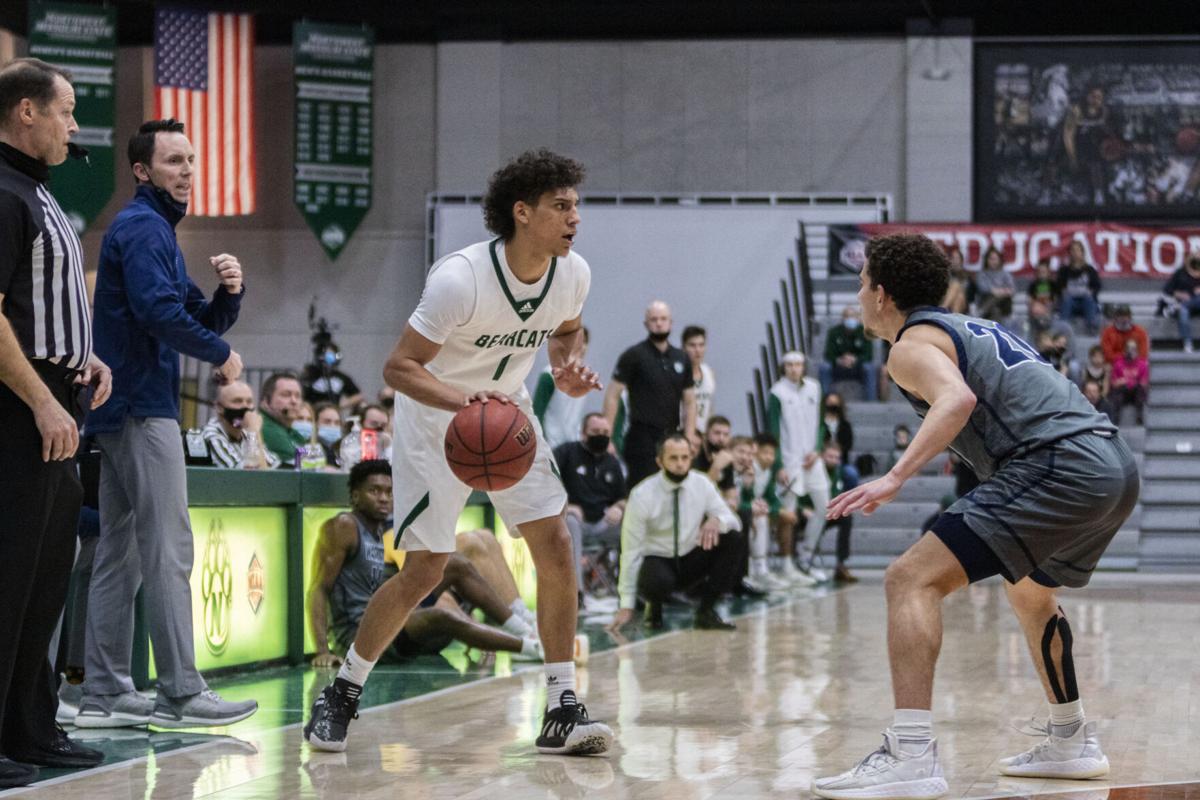 Diego Bernard dribbles near the nearside wing in the first half of Northwest's loss to Washburn March 6 in Bearcat Arena. After trailing by as many as 13 points, Northwest took a 2-point lead on a pair of Bernard free throws with 2.7 seconds left in the matchup, but lost after Washburn's Tyler Geiman drained a 55-foot prayer at the buzzer.

Junior guard Trevor Hudgins pushes toward the rim in the second half of Northwest's last second loss to Washburn March 6 in the MIAA Tournament Championship matchup. Hudgins scored 18 points and played all 40 minutes in the 69-68 loss. He earned All-Tournament honors.

Coach Ben McCollum reacts to a foul call in the second half of Northwest men's basketball's MIAA Tournament Championship loss to Washburn March 6 in Bearcat Arena. McCollum said Northwest's play was "just terrible" in the first half of the loss.

Diego Bernard dribbles near the nearside wing in the first half of Northwest's loss to Washburn March 6 in Bearcat Arena. After trailing by as many as 13 points, Northwest took a 2-point lead on a pair of Bernard free throws with 2.7 seconds left in the matchup, but lost after Washburn's Tyler Geiman drained a 55-foot prayer at the buzzer.

Junior guard Trevor Hudgins pushes toward the rim in the second half of Northwest's last second loss to Washburn March 6 in the MIAA Tournament Championship matchup. Hudgins scored 18 points and played all 40 minutes in the 69-68 loss. He earned All-Tournament honors.

Northwest men’s basketball junior guard Diego Bernard stepped to the free-throw line of the south basket inside Bearcat Arena with 2.7 seconds remaining in the Bearcats’ third battle with Washburn this season.

The Ichabods won the first, an 84-82 upset in overtime against the Bearcats Jan. 7 in Maryville.

The Bearcats won the second, an 88-85 triumph in overtime Feb. 20 on the road to clinch their eighth consecutive MIAA regular season title.

When Bernard had two shots ahead of him, the game was tied at 66. He was trying to assure the Bearcats wouldn’t need another extra five minutes against the Ichabods.

Northwest junior guard Trevor Hudgins blocked a go-ahead shot from Washburn’s Tyler Geiman on the preceding possession, in which Bernard was fouled after securing the rebound. That's why he was there in the first place.

He nailed both of them to give the Bearcats a 2-point advantage.

“(Bernard) gets to step up to the line with two seconds left, hits two clutch free throws and then, you know, you think two dribbles, don't foul,” Northwest senior forward Ryan Hawkins said, “don't give up a full-court pass for an easy 3. Make them take something from 70 feet away, and if it goes in, I guess it goes in.”

Geiman got the inbounds pass, dribbled twice and heaved the ball toward the north basket of the gym. The Bearcats didn’t foul, just as Hawkins envisioned it.

It was 55 feet instead of 70, but on its way down, Geiman’s shot hit nothing but the net to give Washburn a 69-68 win over the No. 1 Bearcats Saturday evening in the MIAA Tournament Championship.

“That was crazy, man. I’m still shocked,” Geiman said in the aftermath of his heroics while wearing the net he had just cut down around his neck. “Right as I shot it, I knew it definitely had a chance to go. I thought it was in, personally, but you never know.”

“Probably wouldn’t change a thing,” said Hawkins, who was talking to a group of reporters amid Washburn’s postgame celebration. “Making him throw up a prayer from the other free-throw line is a pretty good shot. Two seconds left, I don’t know, probably 99% of the time that doesn't go in. … It’s March. That’s part of March. Can’t really do a whole lot with it.”

The Bearcats (23-2) seemed out of the game for most of it, in part due to their struggles on offense. Northwest went the first 2 minutes and 45 seconds of the contest without a bucket. It didn’t get any better for the ’Cats throughout the first 20 minutes, either.

Hawkins nailed a 3-pointer with less than six minutes in the first half to cut Washburn’s lead to 6. The Ichabods (19-6) responded by draining two 3-pointers of their own en route to a 27-15 advantage.

“I didn’t think we came out very ready in the first half,” Northwest coach Ben McCollum said. “Just, just didn’t, just — terrible, honestly. I think we thought it was going to be easy, and it’s not. It is what it is.”

The Ichabods took a 30-19 lead into the half. It was the fifth time Northwest has trailed at the break this season. In the four games prior, the Bearcats were 3-1. Of course, the lone loss was the aforementioned one to Washburn roughly two months ago.

The 11-point deficit was a rarity for the Bearcats. They shot 23.1% from the field during the first half, including 14.3% from beyond the arc.

Northwest scored a combined 118 first-half points in its quarterfinal and semifinal games. The Bearcats’ 19-point first half was the fewest points they’ve scored since March 17, 2015, when they endured a 47-42 loss to MSU Moorhead in the final game of the Central Region Tournament.

“It's like we went away from everything we've been doing,” McCollum said. “It just wasn't a good half. Probably the worst half of basketball that we've played all season.”

Washburn guard Jalen Lewis had a game-high 15 points at the break, including a clip of 3 of 5 from deep. He eventually finished with 26, but his first half set up the would’ve-been career-high if he hadn’t set it the night before with 29 in the Ichabods’ 101-72 win against Missouri Western.

Lewis’ success was reflective of the rest of the first half for the Ichabods, who collectively shot 52% from the field and 50% from 3-point land.

“We were terrible defensively to start,” McCollum said. “A couple of times, we didn't know who we were guarding. … I don't know what was going on in that first half.”

The Bearcats rallied back and Hawkins eventually tied the game at 50 with a little less than seven minutes in the second half. He finished with 23 points and 10 rebounds, marking the 28th double-double of his career. It was also his 41st 20-point performance.

Northwest led by as many as 4 points with more than five minutes in the contest. Both teams traded buckets throughout the final five minutes, though, including the final one from Washburn.

After not trailing for a single second in their other two MIAA Tournament games, the Bearcats trailed for more than 32 minutes against the Ichabods.

“In a way, it was a lot more fun today,” Hawkins said, “just got all of the competitive juices flowing.”

The Bearcats will now turn their attention to the Central Region Tournament, which will take place March 13-16 in Aberdeen, South Dakota.

It doesn’t matter that Washburn ended the Bearcats’ 18-game winning streak. It wouldn’t have helped them next weekend anyway.

It doesn’t matter that Washburn halted the Bearcats from winning their sixth consecutive and 10th overall MIAA Tournament title. It wouldn’t have helped them next weekend anyway.

And it doesn’t matter that Washburn has bested the Bearcats two times in three meetings this season. It won’t help either team next weekend anyway.

“This isn’t our season,” Hawkins said in the aftermath of the loss. “Now we’ve got a week to prepare for regionals, and I feel like after every time we’ve played Washburn we start playing really good afterward, so that’s one positive to come out of this.”

“We’ve got a regional to compete in; it’s not the end of the world,” McCollum said. “We’re still conference regular season champions. … We’ll be the No. 1 seed in the national tournament and you’ve gotta go try and win that now.”