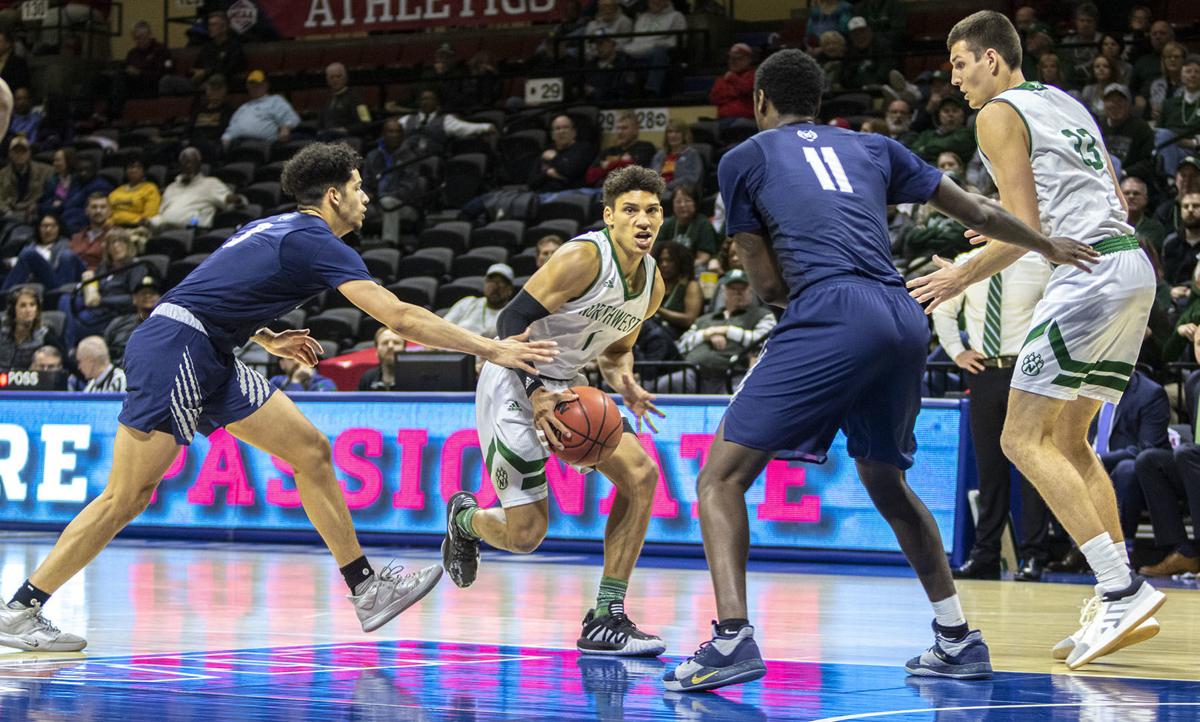 Sophomore guard Diego Bernard was one of three Northwest players to score in double digits against Lincoln March 5, adding 14 points in the contest. 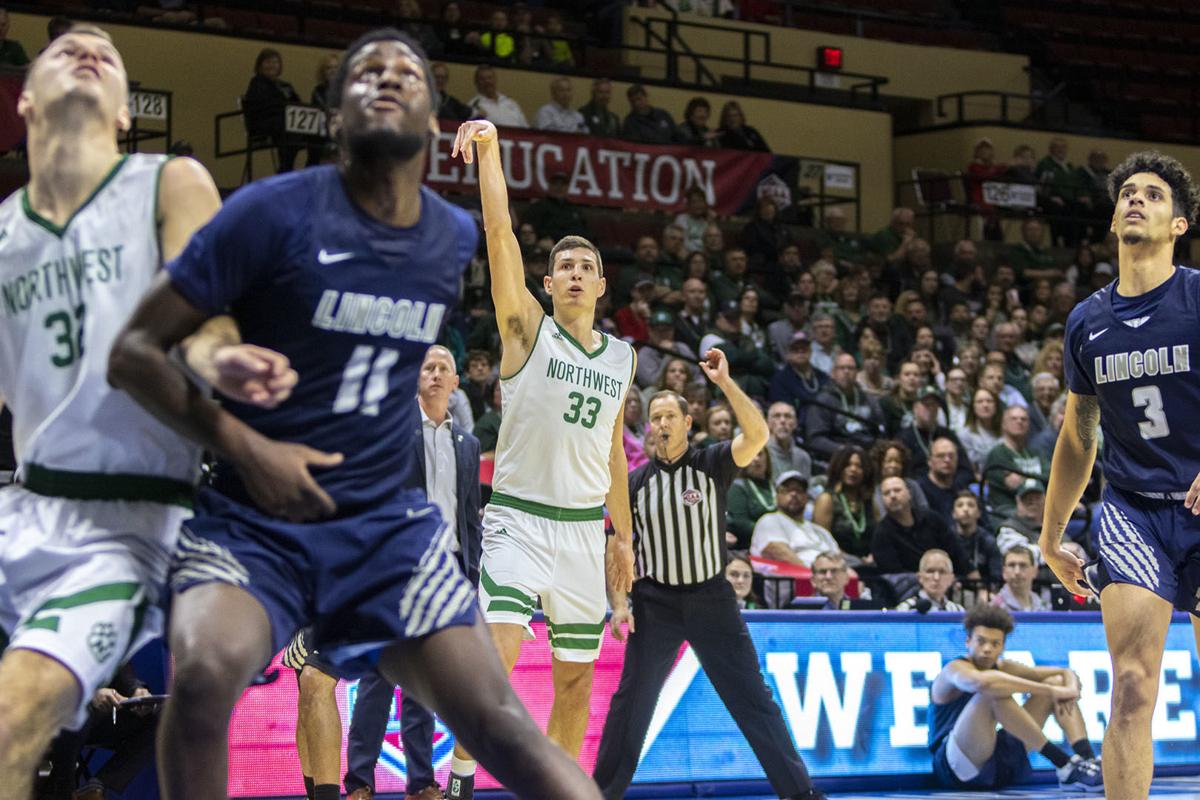 Junior forward Ryan Hawkins scored a game-high 31 points in Northwest men's basketball's 75-54 over Lincoln in the second round of the MIAA Tournament March 6. 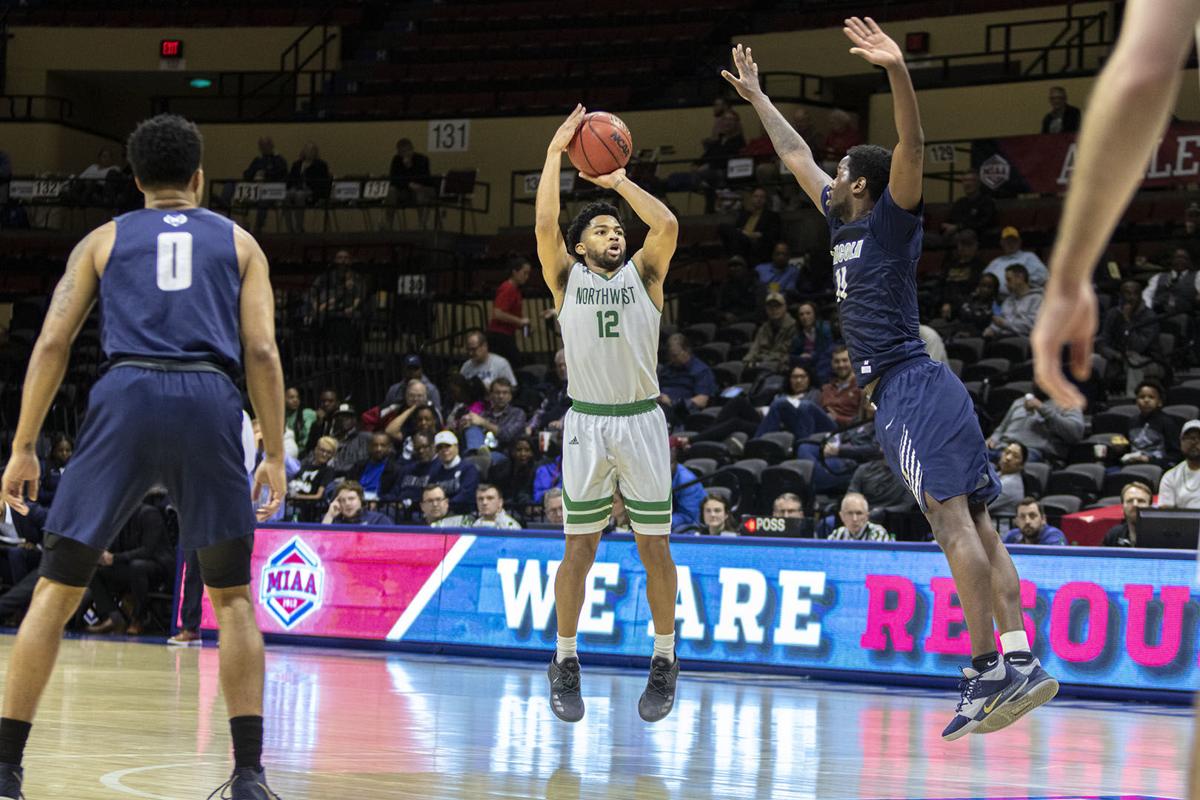 Sophomore guard Trevor Hudgins scored 14 points in Northwest men's basketball's quarterfinal win over Lincoln March 6 in the first game after he was named MIAA Player of the Year March 3.

KANSAS CITY, Mo. — In the aftermath of Northwest men’s basketball’s 75-54 win over Lincoln University March 5 in the second round of the MIAA tournament at Municipal Auditorium, Lincoln coach John Moseley sat behind a table doused in a black table cloth and leaned over a microphone with clear eyes that turned misty at times.

Moseley described Northwest’s daunting lineup as “crazy,” noting the absurdity of the Bearcats’ shooting ability from beyond the arc after they shot 47.8% from three in the game. He complimented Northwest coach Ben McCollum and his staff for their ability to recruit high-level players, comparing the group his team had just matched up against to the Michael Jordan and Scottie Pippen era of the 1990s Chicago Bulls.

He lamented about missing out on a talent like sophomore guard Trevor Hudgins, who scored 14 points in his first game after being named the MIAA Player of the Year March 3. He marveled at the ability of junior forward Ryan Hawkins to score from both inside the paint and beyond the arc. He noted the shooting ability of senior Ryan Welty, who he said has become a near-afterthought due to the talent-stacked roster Northwest possesses.

After losing to No. 1 Northwest (29-1) for the third time this season, Moseley dwelled on the gap between the Bearcats and the Blue Tigers (11-19), who lost to Northwest to end their season for the second year in a row. In an opening statement that lasted more than 90 seconds, the coach put into words the thinking of an entire conference.

“I told our players in the locker room, ‘Northwest has set the standard for what basketball — for how it’s played in this league,’” Moseley said. “‘They’re not coming back to the rest of the league. It’s the rest of our responsibilities to get to them.’”

“That’s the challenge that we face at Lincoln and 12 other programs face it as well,” Moseley said.

After struggling briefly to start the game, leading Lincoln by 1 point six minutes into the contest, the Bearcats rebounded to shoot 50% in the first half and carry an 8-point lead into the locker room.

The early lack of focus, something McCollum referred to as “game slippage,” came due to the realities of postseason basketball, the coach said. In its first-round matchup with the No. 8-seed Central Oklahoma, Lincoln became acclimated to the bright lights of Municipal Auditorium and the MIAA Tournament itself, McCollum said. Entering their contest with Lincoln, Northwest was playing catch-up.

“First round’s always the toughest, we’ve always said,” McCollum said. “It’s just a hard game, regardless. … Just trying to get used to the environment, the intensity of postseason. It’s a lot more difficult than you think.”

As much of Northwest’s lineup meandered its way to a form of settled in, Hawkins seemed to be there from the game’s opening tip. The junior, fresh-off the announcement of his second straight MIAA Defensive Player of the Year award, scored 17 of the team’s first 27 points, entering halftime with 21.

For Northwest, the second half came with an increased field goal percentage and a wider lead. The Bearcats shot 66.7% from the field after the break and 70% from beyond the arc. Hawkins, who went 11-for-17 from the field in the contest, finished the matchup with a game-high 31 points, the highest output of his postseason career. Three starters — Hawkins, Hudgins and sophomore guard Diego Bernard — each finished the game in double digits.

On the surface, the win provided increased momentum to a team that’s won 15 games in a row at Municipal Auditorium and 21 consecutive games overall. But McCollum didn’t see it that way. The nature of the postseason, he said, doesn’t allow for the notion of momentum.

“It really doesn’t,” McCollum said. “It just gets us used to the environment. Every game’s so different in the postseason. Every team’s so different this time of year. And it really does nothing for you — you’re essentially 0-0 going into the next game.”

For the Bearcats, the next game remains to be determined. They’ll square off with the winner of the March 6 Missouri Western-Washburn in the semifinals March 7, sitting on the verge of the chance to win their fifth straight MIAA Tournament Championship.

McCollum said he’s not concerned with or excited by the prospect of a potential rivalry matchup with Missouri Western, who Northwest beat by double-digits Feb. 25 on the road, in the semifinal game. Moseley said Northwest doesn’t have much reason to be.

“They’re gonna be a hard out this weekend,” Moseley said. “And I fully believe that they’ll be contending for another national championship here in a few weeks.”