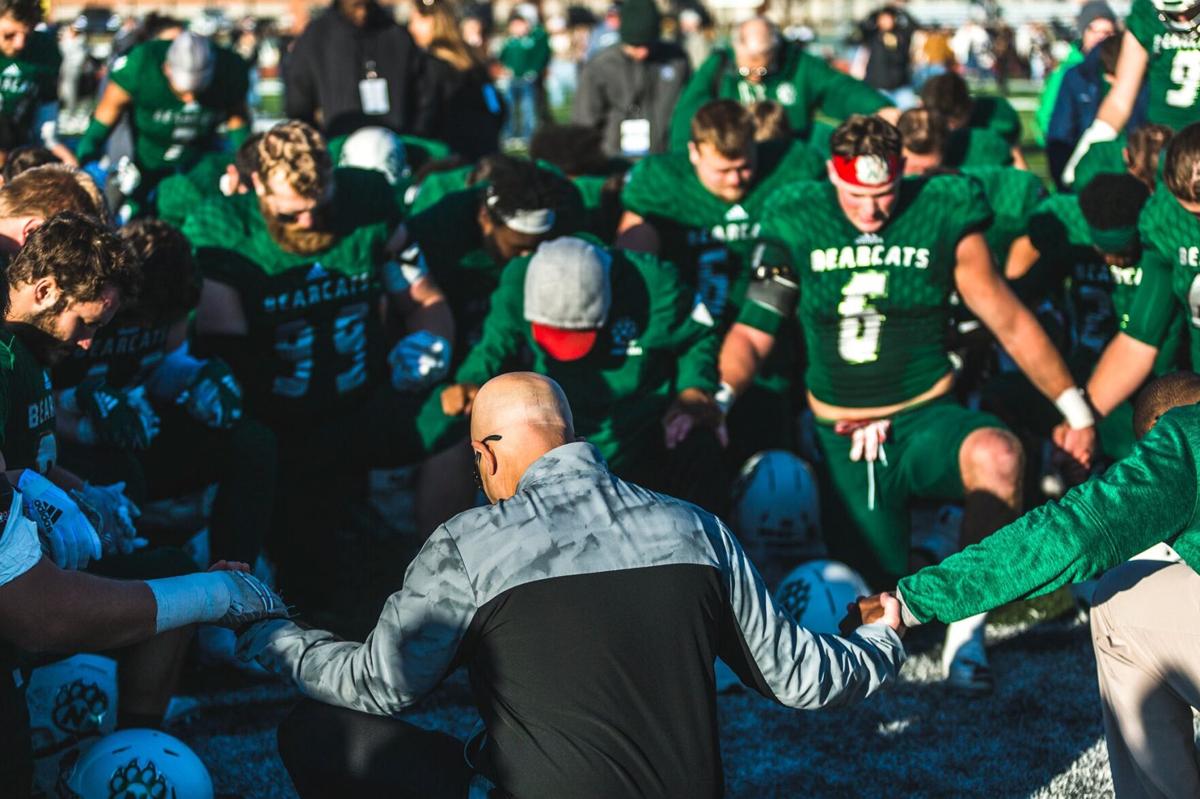 Northwest football ended its 2019 campaign with one loss in the regular season. Due to the COVID-19 pandemic, the Bearcats' fate for 2020 will remain unknown. 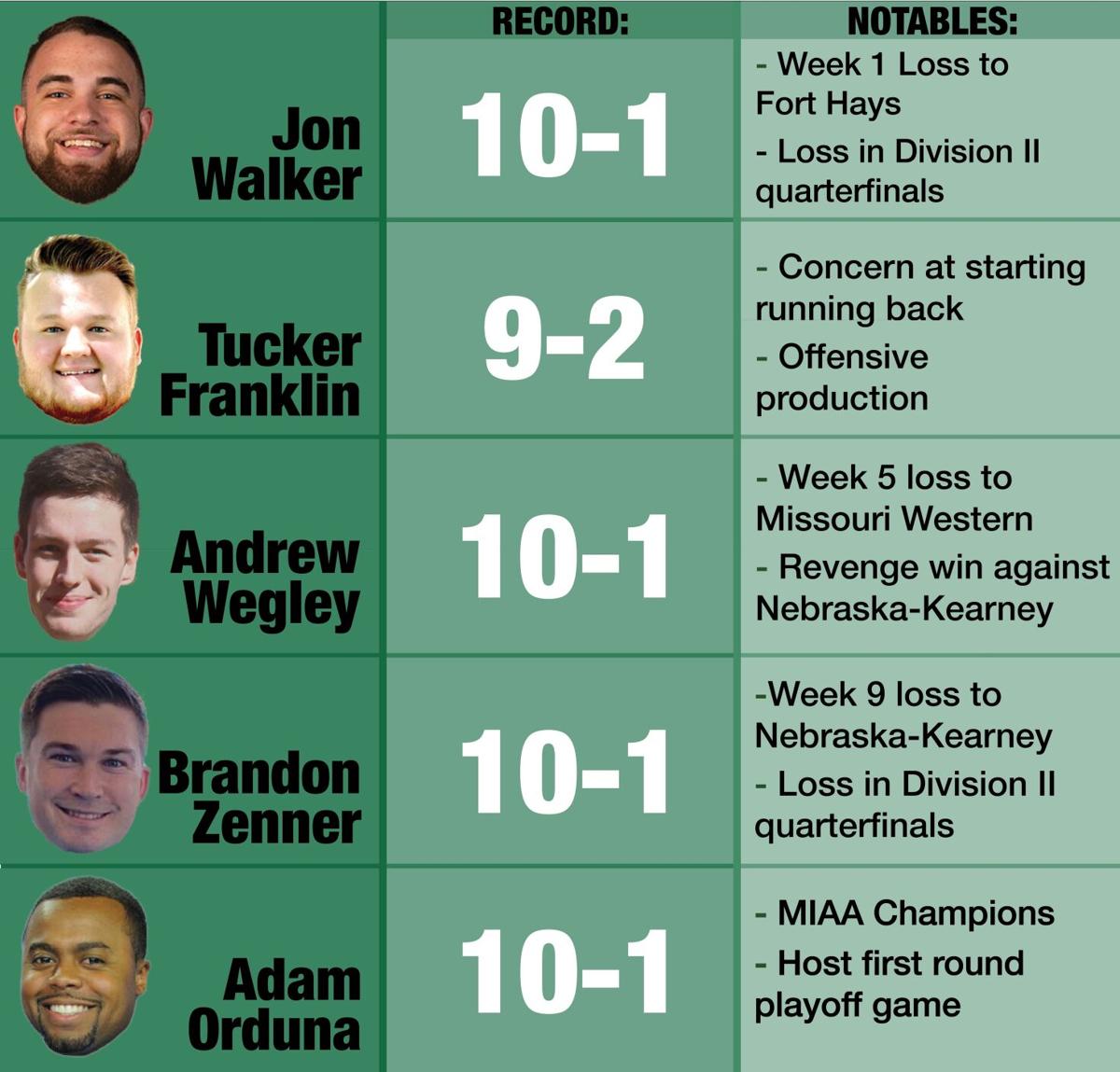 Since last December, we’ve all been without Northwest football. I think that after some of the things the Bearcats accomplished last season, fans were excited to see the program take another step forward in 2020.

Obviously, with no MIAA season and no fall sports championships, we’ll have no clue what Rich Wright and company would’ve done in his fourth season at the helm of the program.

A group of media members that have covered Northwest, and some that still actively do, would like to think we know exactly what this fall would’ve had in store for the Bearcats in a world without COVID-19. All predictions made are based on the original schedule for Northwest football, the one that excluded any coronavirus modifications. With that being said, let’s begin. Here are four “expert” predictions for what would have happened this fall:

It’s safe to say that Northwest football’s season-ending performance against Ferris State in the quarterfinals was underwhelming. In fact, Rich Wright said in August he felt like the Bearcats had the pieces in place to win that game. Perhaps that sparked a revenge tour mindset for the program.

I would’ve taken the Bearcats to finish 10-1 on their original schedule, including a loss to Fort Hays to start the season. It would’ve sent Bearcat Nation into a frenzy, but prematurely.

The program welcomed a new offensive coordinator, lost focal points on both sides of the ball and would’ve had to make a six-hour trek to Hays, Kansas, to play another historic program in the MIAA. It’d be unrealistic to expect everything to go accordingly with all of the new variables in Week 1.

Notable wins would’ve included the Week 3 matchup with Central Missouri in Warrensburg, Missouri, in which the Bearcats’ offense would’ve clicked and blew out the Mules. Along with that, I would’ve taken the Bearcats to get revenge on Nebraska-Kearney in Week 9 at Bearcat Stadium.

After the departure of senior running backs Justin Rankin and Isaiah Strayhorn, the uncertainties at running back would’ve been something to watch for. Along with that, Braden Wright would’ve been without veteran tight end Marqus Andrews for the first time in his career. But, the Bearcats would have a now seasoned dual-threat quarterback, along with senior wideout Imoni Donadelle and junior receiver LaTroy Harper as weapons on the outside. Of course, people can’t forget about senior slot receiver Alec Tatum either.

Defensively, it’s a secondary that lost standout cornerback Chama Pierre, and cornerback J’Ravien Anderson would’ve seen his first game action since being injured last season. Although, senior defensive lineman Sam Roberts is getting some attention from NFL scouts, but anyone that watched him tear through offensive lines last year would’ve guessed he’d be a strong spot for the Bearcats’ defense.

I would’ve taken the odds on the Bearcats to win another share of the MIAA, along with having the opportunity to host another playoff game in Bearcat Stadium. Rich Wright has taken one step further into the postseason all three of his years with the program, but that would’ve changed this year. They get back to the quarterfinals, but the uncertainties on offense leave me with a question mark instead of an exclamation point.

Looking at the original schedule for the Northwest Missouri State football team this season, I would've anticipated the Bearcats to go 9-2 and wouldn't have been surprised if they fell to 8-3.

It certainly would've been an interesting year for Bearcats if there was a full season. With a new offensive coordinator in Todd Sturdy, and likely a new offense, there could've been some growing pains for quarterback Braden Wright and company early on in the year. The loss of running backs Justin Rankin and Isaiah Strayhorn leaves the question of who would pick up the production at the Bearcats' most used position.

In head coach Rich Wright's three years at the helm, the team has improved each season, but having Fort Hays State and Central Missouri in two of the first three weeks was going to be an early test for the offense, which looked anemic to end last season.

Overall, the ’Cats would've more than likely won at least a share of the conference and a spot in the playoffs. Depending on the draw, they could've made it as far as they did a season ago, but I wouldn't have expected it.

I would’ve taken the Bearcats to finish their MIAA slate with a record of 10-1.

The first notable win for the Bearcats in 2020 would’ve come in Week 1 on the road in Hays, Kansas. That would have been a tough draw for Northwest, but the Bearcats generally aren’t in the business of losing Week 1 matchups. A Rich Wright defense with an entire offseason to prep for the Tigers? It’s possible Northwest might have lost this game, but my money would have been on the Bearcats.

Next is Week 3 on the road in Warrensburg, Missouri. Brook Bolles graduated. And even with him last year, Central lost by 22. I wouldn’t expect that outcome to change. Lastly, Week 9 against Nebraska-Kearney in Maryville. I think, at some point, Northwest has to play a solid, complete game against the Lopers, right? Maybe that would have been this year.

On the other hand, a notable loss would’ve been Week 5 on the road in St. Joseph, Missouri. Missouri Western has grown from a punchline to a legitimate threat over the last few seasons, and they nearly proved that in Week 1 a year ago. They were probably the second-best team in the MIAA over the last eight weeks of the 2019 season. They got some marquee wins over teams like Fort Hays and over Henderson State in the playoffs. They’re due for one over Northwest.

At 10-1, Northwest undoubtedly would have made it into the bracket in Super Region 3 again this year. But as we saw last year with teams like Ferris State (10-0) and Ouachita Baptist (11-0), you’ve pretty much got to go undefeated to secure home-field advantage through the end of the regional bracket. It’s tough to win playoff games on the road. I would have expected the Bearcats to finish up pretty close to where they did a season ago: with a third-round loss to a higher-ranked team on the road.

The obvious shortcoming in that third-round matchup, based on recent seasons, would have been the offense. Northwest is capable of putting up gaudy numbers in big games, as it did in its 63-7 win over Lindenwood in the second round last year. But it’s also capable of dropping the ball, as it did in a 7-6 win over Harding a week earlier and again a week later in the 25-3 season-ending loss to Ferris.

Maybe, under the direction of new offensive coordinator Todd Sturdy, the Bearcats would have overcome those postseason offensive woes. Maybe another offseason of training and maturation for Braden Wright would have helped pave the way for a championship run. Maybe they would have put together the best season in the Rich Wright era. But there isn’t much evidence yet to suggest they would.

In a world without COVID-19, I would’ve taken the Bearcats to finish the regular season 10-1.

Among Northwest’s notable wins, I would’ve taken them against Fort Hays in Week 1, at Central Missouri in Week 3, on the road against Missouri Western in Week 5, hosting Pitt State in Week 6 and Week 7 against Washburn.

The Bearcats’ lone notable loss would’ve been to Nebraska-Kearney in Week 9.

In terms of the postseason, the Bearcats would’ve gotten back to the Division II quarterfinals before returning to Maryville.

I think the MIAA was and is set to be very balanced going forward and will benefit the teams competing with Northwest. With its defense, skill position playmakers and a year to groom a new starting QB, Missouri Western is positioned to give it a run in the coming years. Fort Hays lost all 3 games in 2019 by 9 points or fewer and was set up for another run.

Central Missouri had to replace an All-American-level QB but will always contend, and Pitt State was set to begin a new era with a new head coach. The most intriguing team would have been Nebraska-Kearney, who beat Northwest and Missouri Western with one-score losses to Fort Hays and Central Missouri before winning a bowl game with a ton of high-level starters returning, including the Freshman of the Year at QB, and Missouri Western.

The Northwest Missouri State football team would've had more of an offensive identity than in recent years with a veteran quarterback in Braden Wright and outside weapons with Imoni Donadelle. The Bearcats’ offensive line comes back and will have plenty of depth.

The defense may have to play some catch up, losing some key seniors from their front seven, but head coach Rich Wright is a defensive-minded coach and has had one of the top defenses in the country for a long time. The expectation is that he will have that side of the football ready to go.

They only lost one game in 2019 to a tough Nebraska-Kearney team, and handled the big games on the schedule with wins against Central Oklahoma, Central Missouri, and Pitt St. which was played at Arrowhead Stadium.

The big game for Northwest would've been in Week 5 against Missouri Western, who has continued to improve under the helm of head coach Matt Williamson. The Griffons have most of their team back on both sides of the football from 2019, and are coming off back-to-back bowl wins in the Agent Barry Live United Bowl.

I think the Bearcats would go 10-1 and potentially win a share of the conference title, and would be able to host another playoff game with the chance to make a run at another national championship.