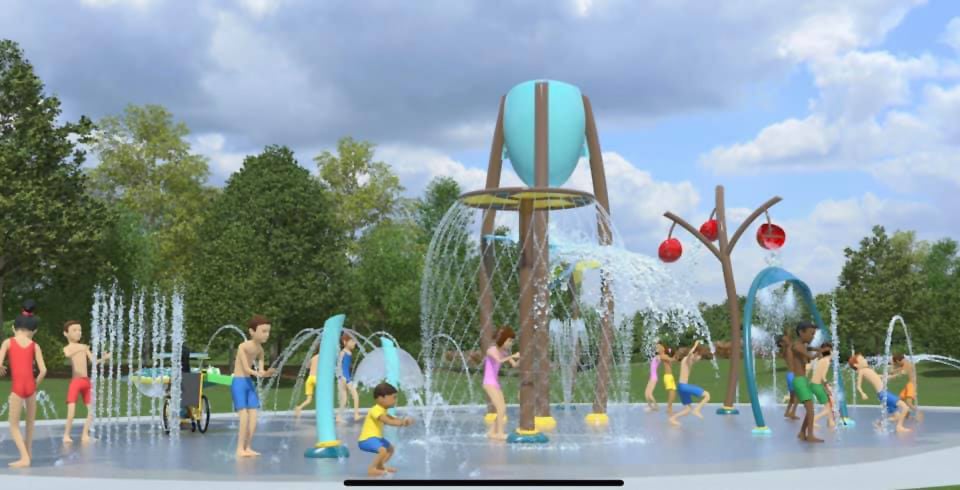 The park’s equipment supplier Aquatix created the sketched renditions for the city. Construction on the new park could begin as soon as April 2020.

The park’s equipment supplier Aquatix created the sketched renditions for the city. Construction on the new park could begin as soon as April 2020.

Maryville continues to plan for a new park set to open summer 2020 following a donation made by two life-long community members.

Project details of the new park, named the Thomson Splash ‘N’ Play, were outlined by the city at its Feb. 24 city council meeting. Maryville Parks and Recreation is working with donors Dick and Kay Thomson to create the kind of park the donors had in mind, one featuring water spraying equipment, a splash pad, musical features and a large area for children to cool down in the summer months free of charge.

The total cost of the project’s construction is still in discussion, but it will come at zero cost to the city as Dick and Kay Thomson will provide all funding for the building of the park and the land to build it on.

“We’ve been very blessed by the Maryville community and want to give back,” Dick Thomson said in a city press release.

The city will, however, pay for water and maintenance of the park, which will sit on the corner of South Munn and Highway V.

Like other parks in the city, it will feature restrooms, shade structures and benches, but special landscaping will be added to fit the needs of the water filtration system that will accompany a zero-depth splash pad.

Maryville Parks and Recreation will maintain and operate the park, which will include frequent checking and testing of the water and filter system for the splash pad, cleaning the facility and general maintenance that arises in its operation.

At the Feb. 24 city council meeting, Stubblefield said the maintenance would be similar to testing at the Maryville Aquatic Center.

“We are going to test the water every two hours, just like at the pool,” Stubblefield said. “We are going to have a larger water bill … and some added expense to our budget, but I feel comfortable with what we are doing.”

Overall dimensions of the splash pad would be 78 feet by 54 feet, as provided by conceptual sketches. Totaling 4,212 square feet, the splash pad aims to provide adequate space for comfortable play and plenty of water equipment.

Long-term aspirations of the park include play equipment separate from the splash pad, like what most parks in Maryville already consist of, and the building of restroom facilities. The city has begun preliminary discussions with instructors of the Northwest Technical School about students assisting in the building of the additional features, which is one of several options at the city’s disposal.

Dick and Kay Thomson, who recently celebrated their 80th birthdays, said they decided to donate the money and land so Maryville could have a new kind of park for youth.

“We are so happy to add to the vitality of Maryville with this splash park,” Kay Thomson said.

The park will be free admission, a component the Thomsons said would appeal to people of all ages, abilities, disabilities and incomes.

As of Feb. 24, the city is in the process of drafting detailed plans for land grading to fit the park’s landscaping needs, including elevation of the allotted area at least two feet for concrete placement.

City Manager Greg McDanel said once official construction of the project begins, the park should be completed quickly.

“(The construction process) should take 75 to 90 days,” McDanel said. “It’s really just about getting started now.”

McDanel said the park is a way local government is working with citizens to make progress in the community.

“We are fortunate that the family is investing to put in the circulation system,” McDanel said. “It’s going to help the whole process.”

The city has applied part of the overall grant donation toward legitimate progress of the park, which could come in the form of construction by April and predicted completion by summer.