You are the owner of this article.
Edit Article Add New Article
You have permission to edit this article.
Edit
Home
News
Sports
Opinion
Arts and Entertainment
KNWT8
Tower Yearbook
Heartland View
Advertising
Contact Us
Subscribe
1 of 5 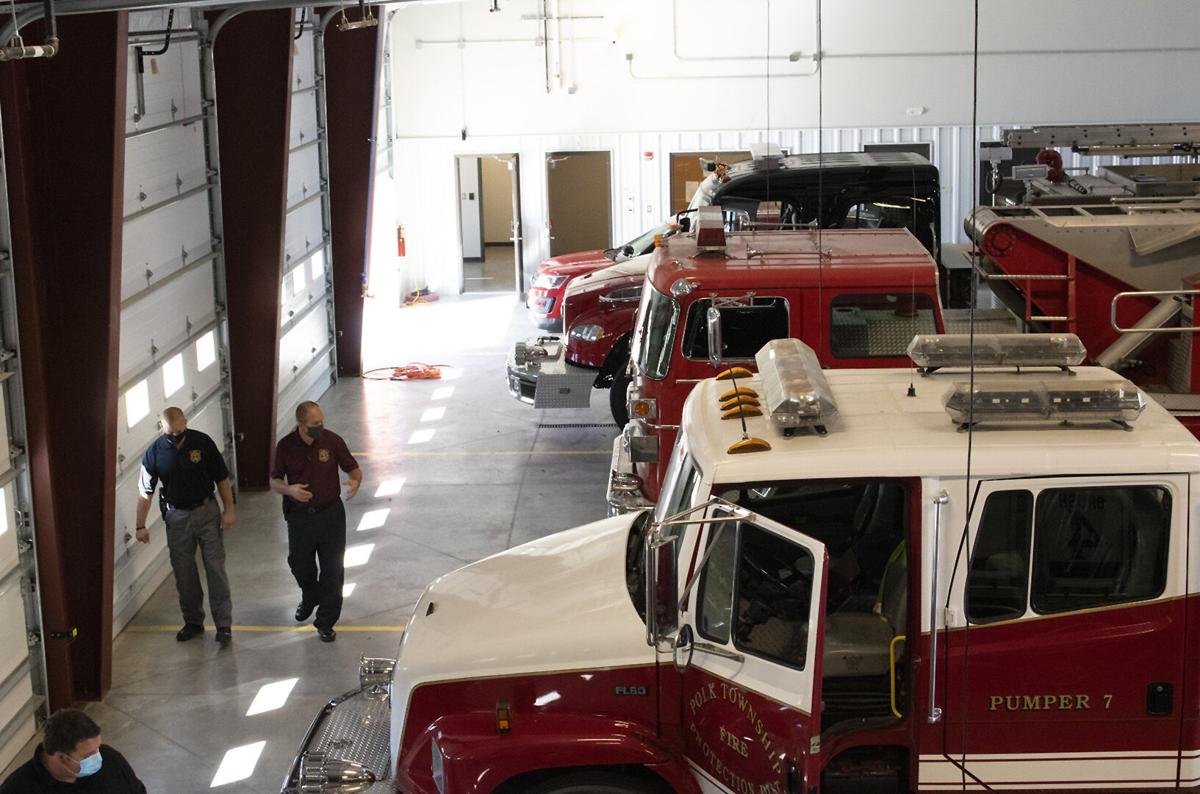 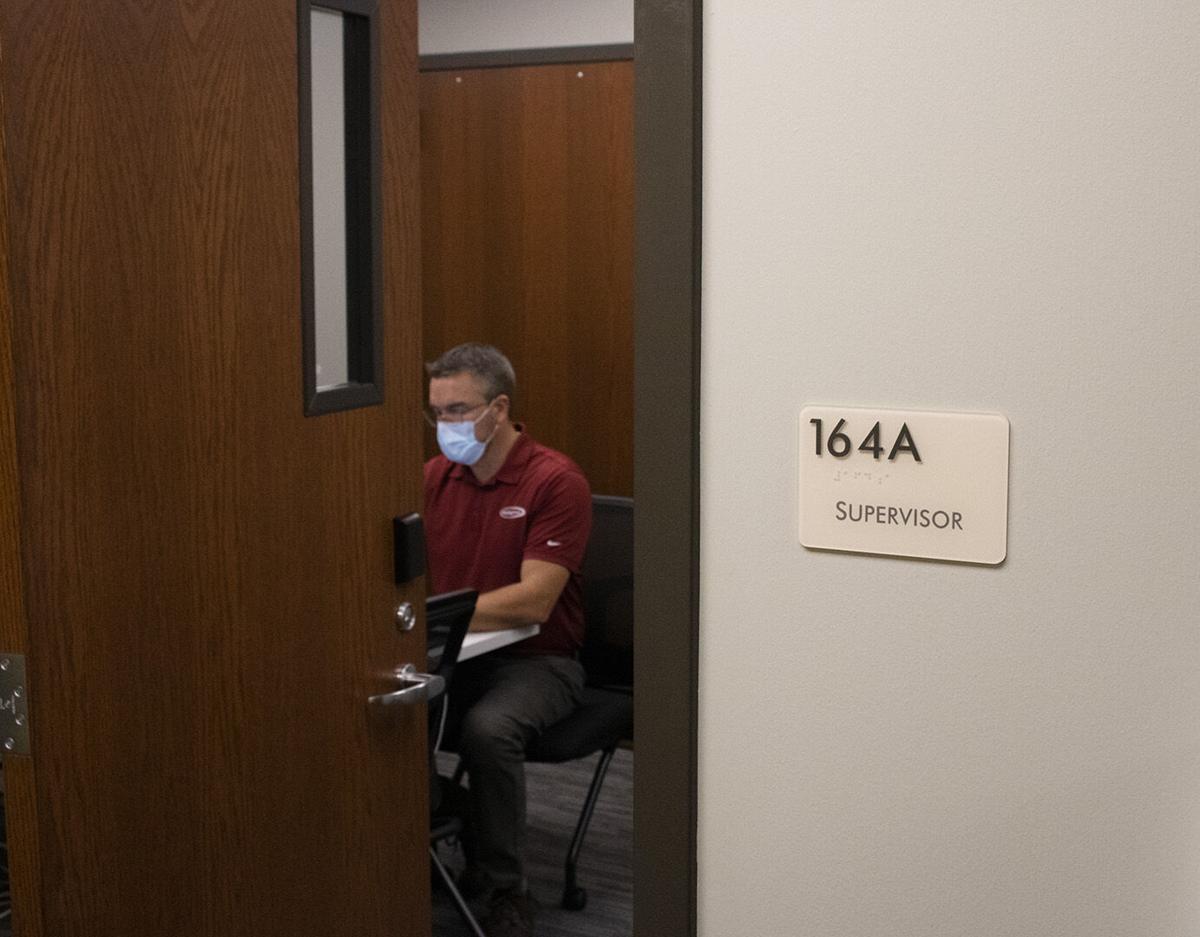 A supervisor employee works near the dispatch center in the new public safety building. 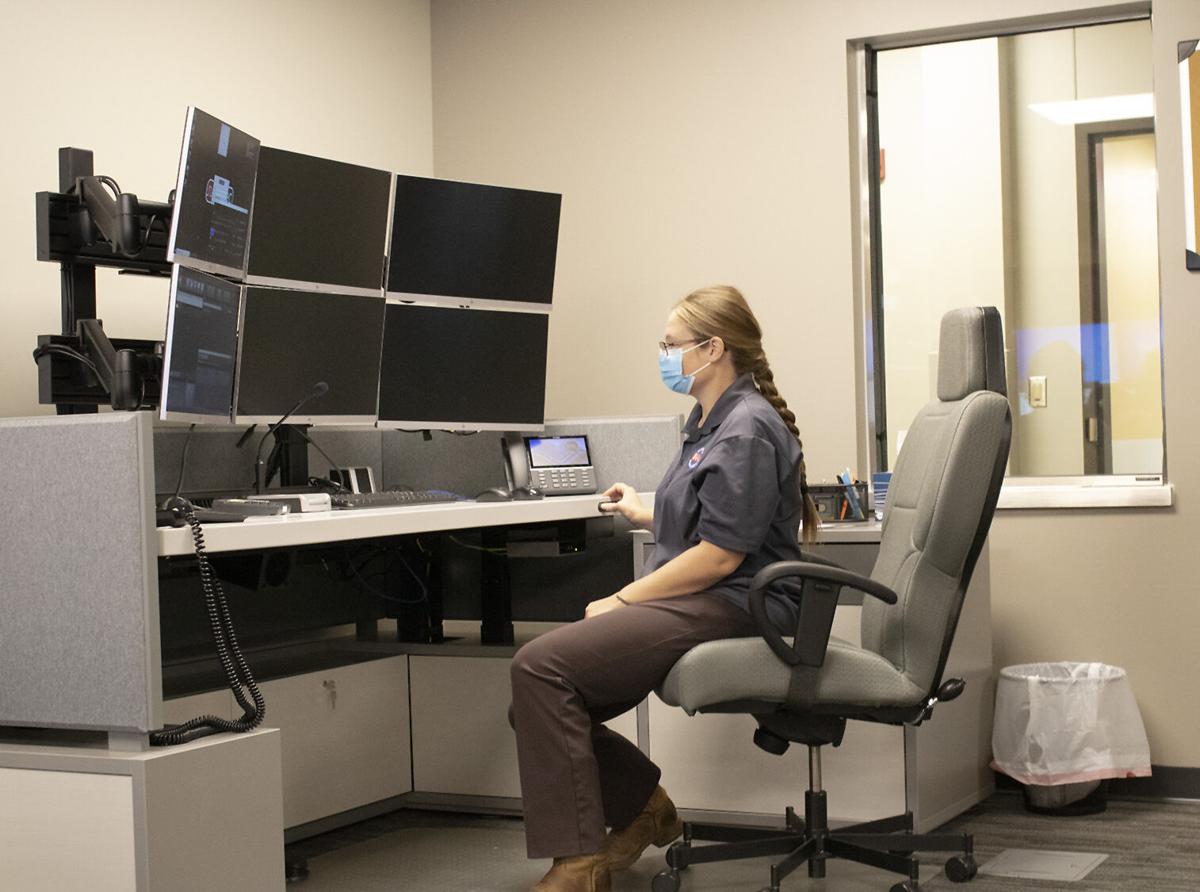 A dispatcher works at one of many new sit-to-stand work stations spaced across from one another. The work stations have an operable button that electronically shifts the table up and down for working flexibility. 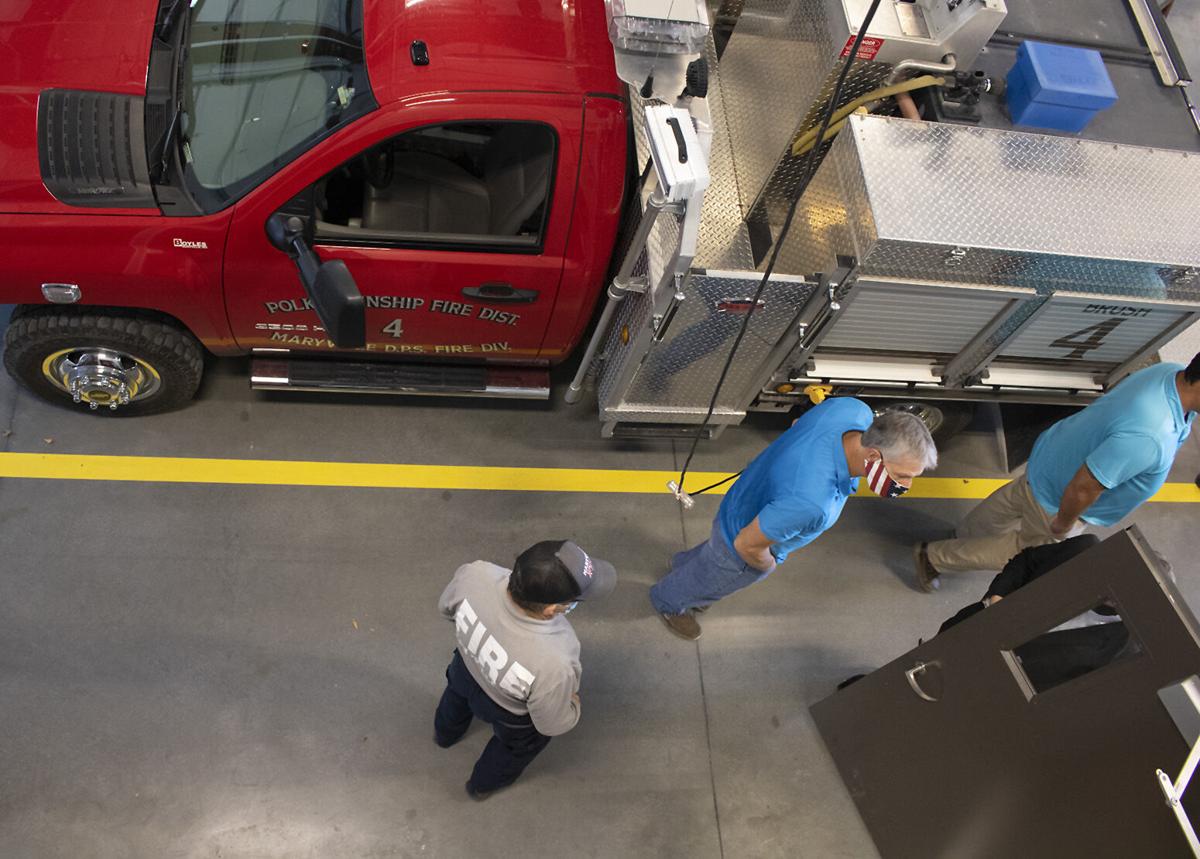 Fire Captain Phil Rickabaugh (left) leads a tour of the new firetruck bay, focusing his presentation on being grateful for the training rooms and larger capacity for equipment and efficiency. 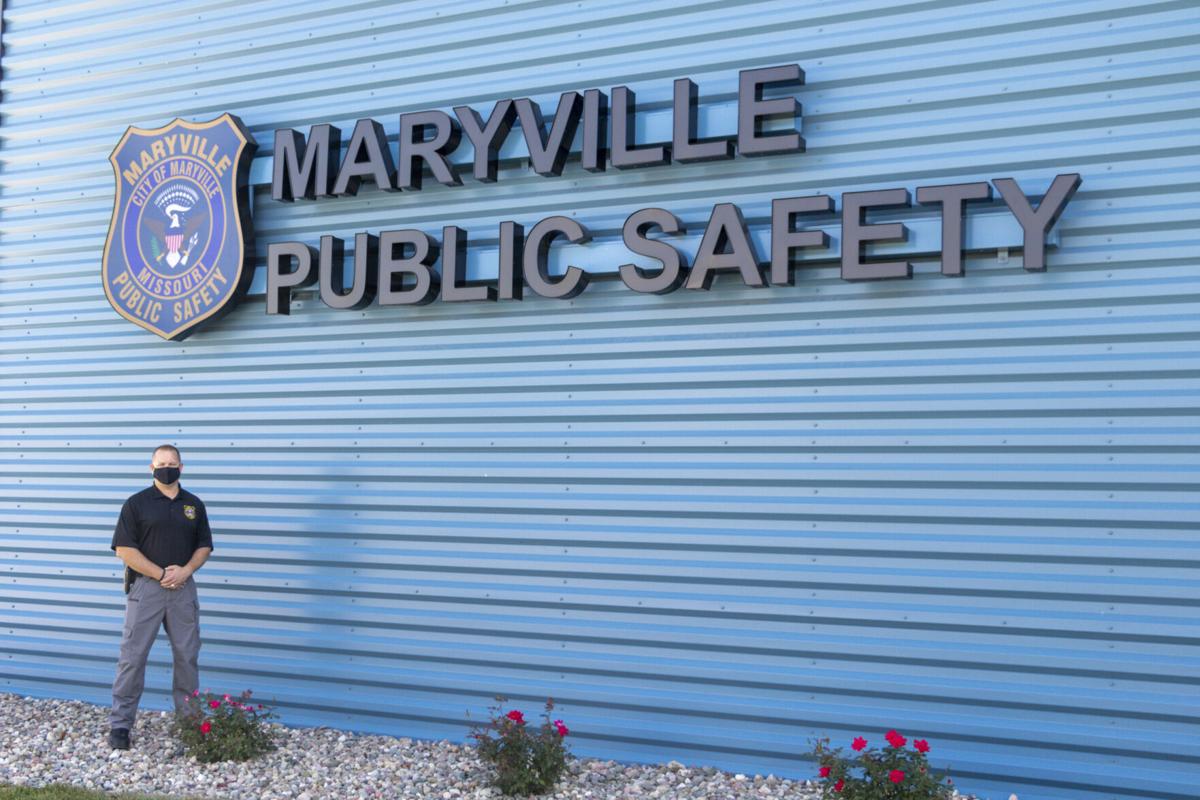 Just past the front doors of the new Maryville Public Safety building, guests walk over the agency’s logo, printed large on the floor and glance at a plaque solidified on the wall next to them. “R. Keith Wood Public Safety Facility” it reads, commemorating the work of the long-time public safety director who’s vision for the agency shines even after his retirement.

The new building houses all of Maryville Public Safety, including police, fire and dispatch. With several improvements focused on efficiency and functionality, the building took several months to complete, but several more years at that to plan and execute.

At a tour of the facility Sept. 29, Maryville Public Safety’s Interim Director Ron Christian said there is a lot he could be grateful for, but the improvement he never neglects to mention is the fact it has a public bathroom.

“We laugh now, but it means a lot more to us than people realize,” Christian said to the group through a chuckle.

Christian talked about other improvements that mean a lot to those coming in and out of the building daily. Those changes include large meeting rooms that could be used for local and regional trainings, up-to-date locker rooms for officers, the consolidated 911 dispatch center and a fire truck bay, which by its dimensions alone, the old public safety building could fit inside of.

Meeting rooms in the new facility are aimed to provide for regional law enforcement and fire training and will be made available for other events public safety holds. The rooms may also be available for public use, Christian said, standing in one of the rooms with his arms spread, motioning toward the newly spacious capacity.

The “C” shaped hallway just past the building’s entrance branches off in a couple different directions, leading visitors to several different offices and rooms, and eventually to dispatch services.

The new consolidated dispatch system, the Northwest Regional Communications Center, began full operation at 9 a.m. Sept. 30. It is composed of dispatch for police, sheriff, ambulance and the 11 local fire districts.

Dispatch Supervisor Jessica Rickabaugh said the dispatch center also serves as a storm shelter, calling it essentially a “building inside a building,” so when storms happen, communication lines remain up and going.

The dispatch center itself came with notable upgrades, including sit-to-stand workstations for dispatchers, bulletproof glass at the lobby entry point and a small kitchen for snack and drink breaks on shifts.

Like most other entities within the new public safety building, a component that was huge for efficiency was space.

“Previously, if a dispatcher needed to get up and get a drink, they would have to call someone else over to be in their place while they did,” Jessica Rickabaugh said.

Overall, the theme for dispatch has been one word — new.

The radio tower for dispatch and public safety communications is new; the antennas on the tower and the radio console itself are all new. Also, the 911 system, the direct routing into the dispatch center is a new setup, along with equipment with an updated mapping system that is aimed to provide quicker response times.

Jessica Rickabaugh was able to be a part of the equipment procurement process for the new building. She said it was exciting to think about the safety, security and efficiency compared to the old building.

“There was a lot of dreaming that went into this process, looking at what we can afford and what’s the best options for the community and the county,” Rickabaugh said. “We are just hoping for ease of communication, both as calls come in and as we call out.”

The fire department side of public safety also saw improvements for increased efficiency. The massively updated space was huge for the department in a few ways, but one of note that Fire Captain Phil Rickabaugh mentioned in a tour of the facility was the ability to increase air quality.

With the diesel fire trucks starting up in the small space of the old truck bay, there wasn’t a great way to increase air quality. Now, with a new Airvac system, which takes “dirty air” in, cleans it, then pushes it back out, firefighters have one less encounter with cloudy, polluted air.

Phil Rickabaugh walked through the spacious fire bay and pointed toward the old aerial ladder truck that the department received after a fire on Northwest’s campus. Before then, the department did not have one. Now, the old ladder truck is being replaced.

Both Christian and Phil Rickabaugh commended city staff for the work done to complete a project that they said will help not only the departments, but the community itself for decades to come.

“It’s pretty great to think where we are now,” Phil Rickabaugh said. “A lot of hard work went into this project.”

Maryville Public Safety is still in the process of moving files and evidence from the previous building into the new one. Dispatch is fully operating, and the old public safety building is up for bids from interested buyers in the community.