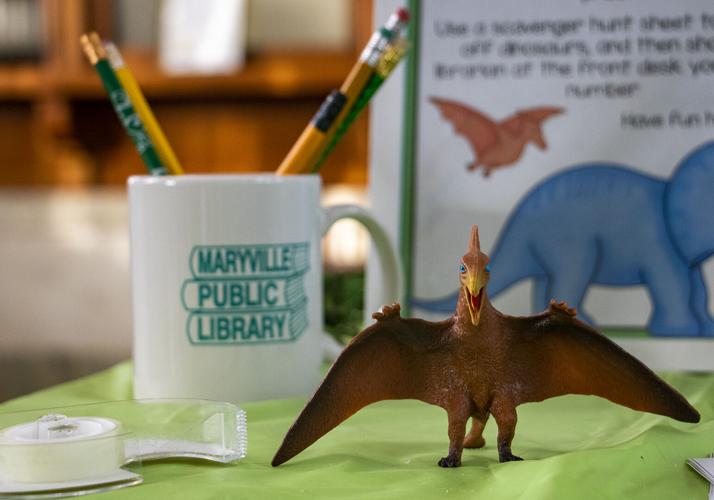 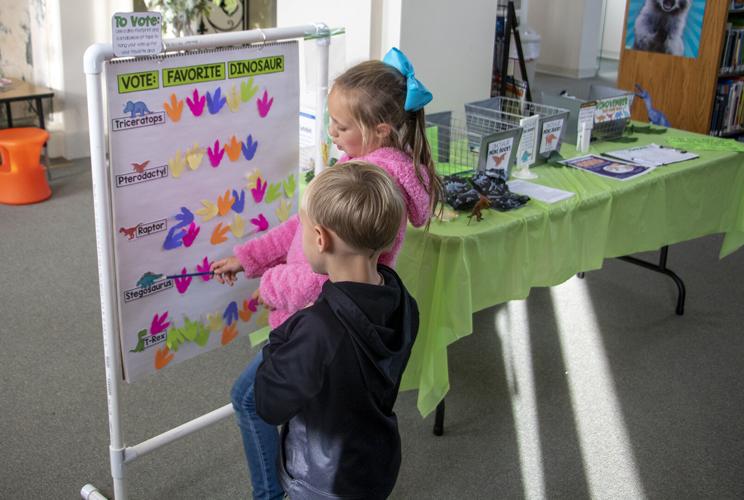 Two children contemplate which dinosaur is their favorite at the Dinovember event at the Maryville Public Library. The library wanted to create an event for Maryville elementary students to fill their time on Mondays since they are off.

The Maryville Public Library is hosting the first Dinovember, an event happening all throughout November which allows children in pre-K through sixth grade to participate in various activities, such as a scavenger hunt and voting on their favorite dinosaur. This event is not only for the students in Maryville, but all of Nodaway County.

Maryville Public Library Director Stephanie Patterson said that Dinovember originates with Kansas City authors, Refe and Susan Tuma. Every November, the couple convinces their own children that while they are asleep, their toy dinosaurs come to life. The couple has been doing this since 2013 and have published a few books based on the stories they come up with for their children.

“Their picture book series titled ‘What the Dinosaurs Did’ was one of the library's top-circulating children's books last year,” Patterson said.

This is why the library chose to base the event on Dinovember. The three part series was very popular among the younger children.

Two of the Nodaway County schools, West Nodaway and Nodaway-Holt, are closed on Mondays, so students have an extra day of the weekend. The younger children are often left with a guardian and oftentimes the guardian wants to find something for them to do. This has caused the library to experiment and expand the weekday activity programs to more age groups.

“It is not uncommon for grandparents or parents to be on the lookout for fun activities to do together. It is our mission to provide both reading and learning opportunities to the public,” Patterson said.

The Maryville Public Library has hosted events like this in the past, like book bingo and other various events. Patterson said the library has the most success when choosing topics that are based on large interests among the target age group. Dinosaurs are often a large interest for younger children, which is why the library chose Dinovember as one of the events.

All of November, the library will have a designated area with a few dinosaur related activities. There will be an event led by associate professor of geoscience John Pope Nov. 21. The library wanted to make an educational event that would hold the interest of children. This event will give a hands-on experience to the students that participate with real bones, rocks and minerals.

Dinovember will be continued for the rest of November with a few activities throughout the day. Patterson said the library hopes to have many participants. There are also dino bags and other fossil grab bags for the children while the supplies last.