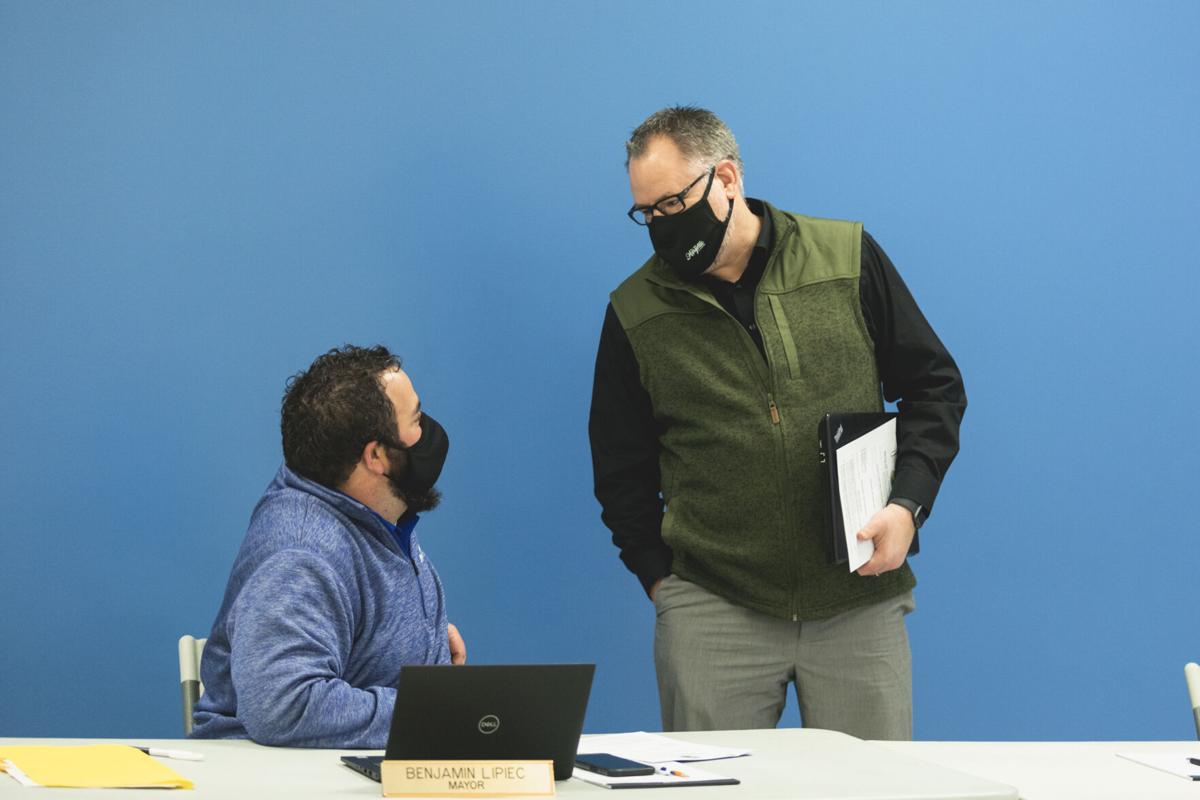 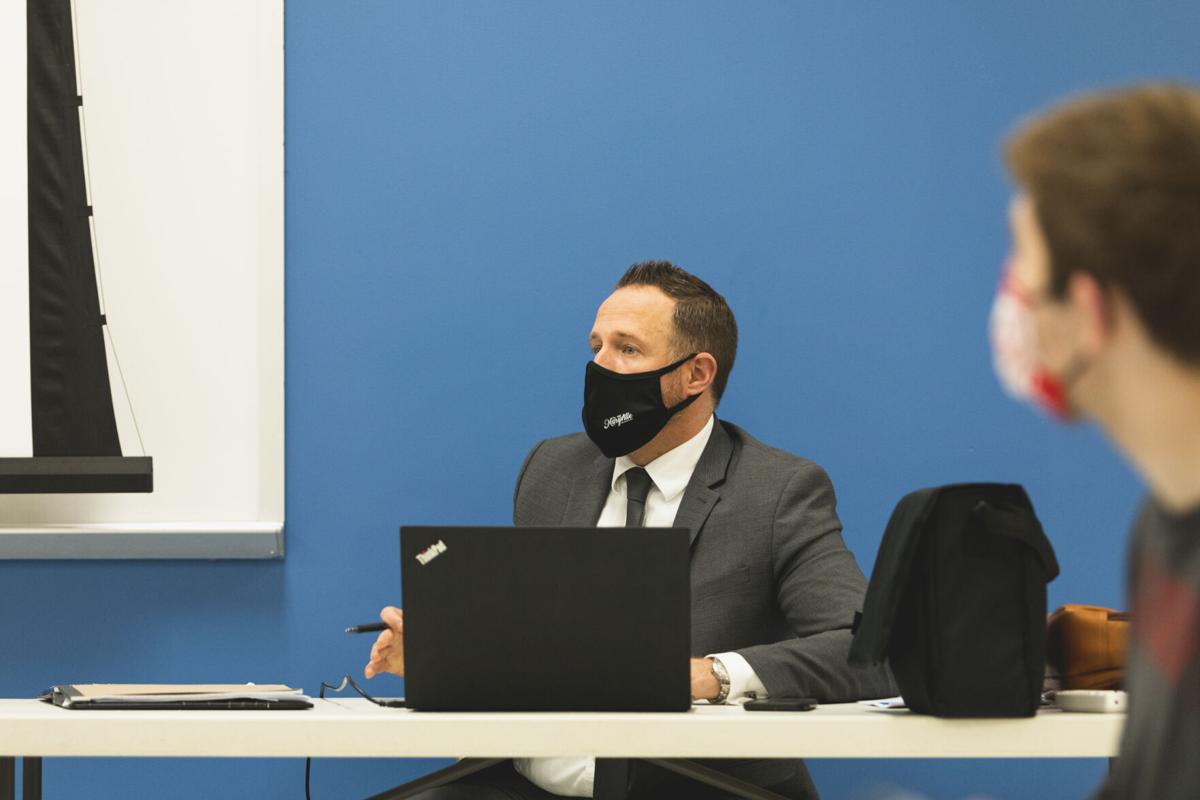 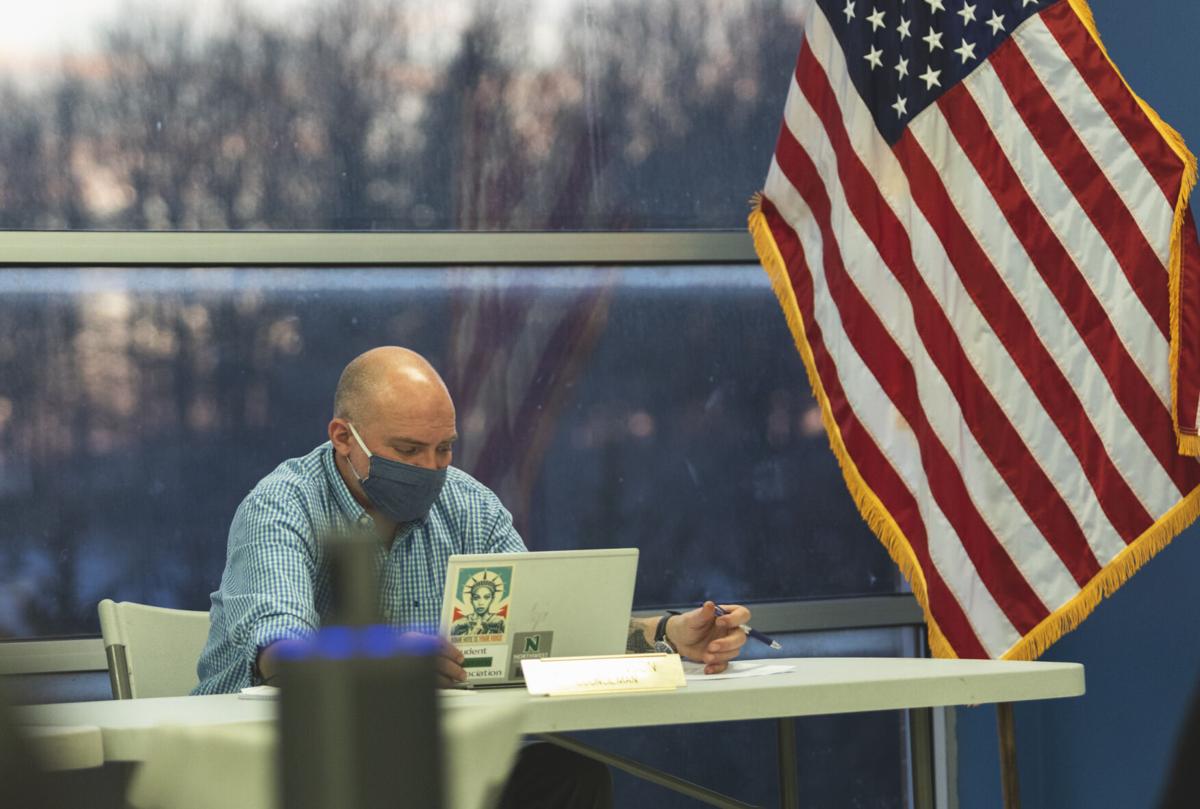 Councilman Matt Johnson asks a follow-up question about the 38 new full RV sites set to be installed at Mozingo Lake Recreation Park by July 1. The Maryville City Council approved a $15,000 contract for the sites at its Feb. 22 meeting in Maryville Community Center.

In the matter of 30 minutes — give or take a little — the Maryville City Council passed nine new ordinances, perhaps the most notable item being another attempted solution to eradicate the ongoing water taste and odor issues stemming from Mozingo Lake.

At its Feb. 22 meeting, the Council voted to pass a $1 million-$1.4 million joint funding project with the Public Water Supply District No. 1. This partnership will largely include a short-term solution for granular activated carbon absorbers, which are considered the best technology available for removing methylisoborneol and geosmin. Maryville City Manager Greg McDanel announced in December 2020 that the city had high levels of geosmin as both compounds made drinking water smell and taste musty.

Mayor Benjamin Lipiec, echoed by Councilman Tye Parsons, said it was nice to see the county working alongside the city to try and overcome the looming water issue which has brought the Council recent public criticism over an issue it has been actively seeking to fix since 2017.

“All parties obviously want to solve the taste and odor issue as fast as we can without having a huge financial burden to our ratepayers, to our customers in the city,” Parsons said. “We really appreciate their willingness to step out. It lays a good foundation for future work.”

The agreement between the water district and the city allows both parties to split the initial upfront costs of the GAC absorbers that will be converted into the already-existing clearwater tank until the water district caps out at $600,000. This four to seven year solution grants the city time to decide on a long-term solution of possibly constructing a new water treatment facility.

McDanel said the GAC absorber project should be completed by November when the water odor and taste issues seem to be at their peak.

Along with efforts to resolve the water issue, the Council approved other ordinances to set the foundation for two large projects the city is positioned to complete this year.

The Council approved a contract with JD Bishop Construction to replace the traffic signals downtown located at Third and Main streets and Fourth and Main streets which were placed in 2008 with the Downtown Revitalization Project as temporary fixtures. The city also aims to add a traffic signal outside of the new R. Keith Wood Public Safety building along First Street.

The $880,775.55 project will consist of replacing the temporary signals with permanent mast arms along with widening the sidewalk in front of the Black Pony Brewery as a part of the development agreement the city entered with the brewery to allow for outdoor seating. Widening the sidewalk will also get rid of the three parking spaces in front of the brewery along Main Street. McDanel noted the cost of the project is significantly higher than the $437,820 the city had budgeted for the project.

The original boat docks were drilled into the lakebed, making them difficult for staff to do maintenance on and leaving them vulnerable to ice. This system is now outdated; the new EZ Docks will allow for staff to do in-house maintenance and pull some dock sections during the winter months. Longer ramps are also set to be installed to help with the constantly-fluctuating lake levels.

Keeping sights set on Mozingo recreation, the Council approved a $15,000 contract with Snyder & Associates to add 38 more RV sites to the RV park at Mozingo Lake Recreation Park with full water and electric hookups. $10,900 was also approved for a topographic map of the expansion from Midland Surveying.

In the 2021 budget, the Council has approved $450,000 for Mozingo Park Expansion. The contracts approved Monday marked the first phases of this much larger project.

The 38 new sites are slanted to be completed by July 1, ahead of the Fourth of July weekend.

Over the past three years, citizen concerns of the Maryville water supply have risen. In 2017, algae blooms in Mozingo Lake were found to caus…