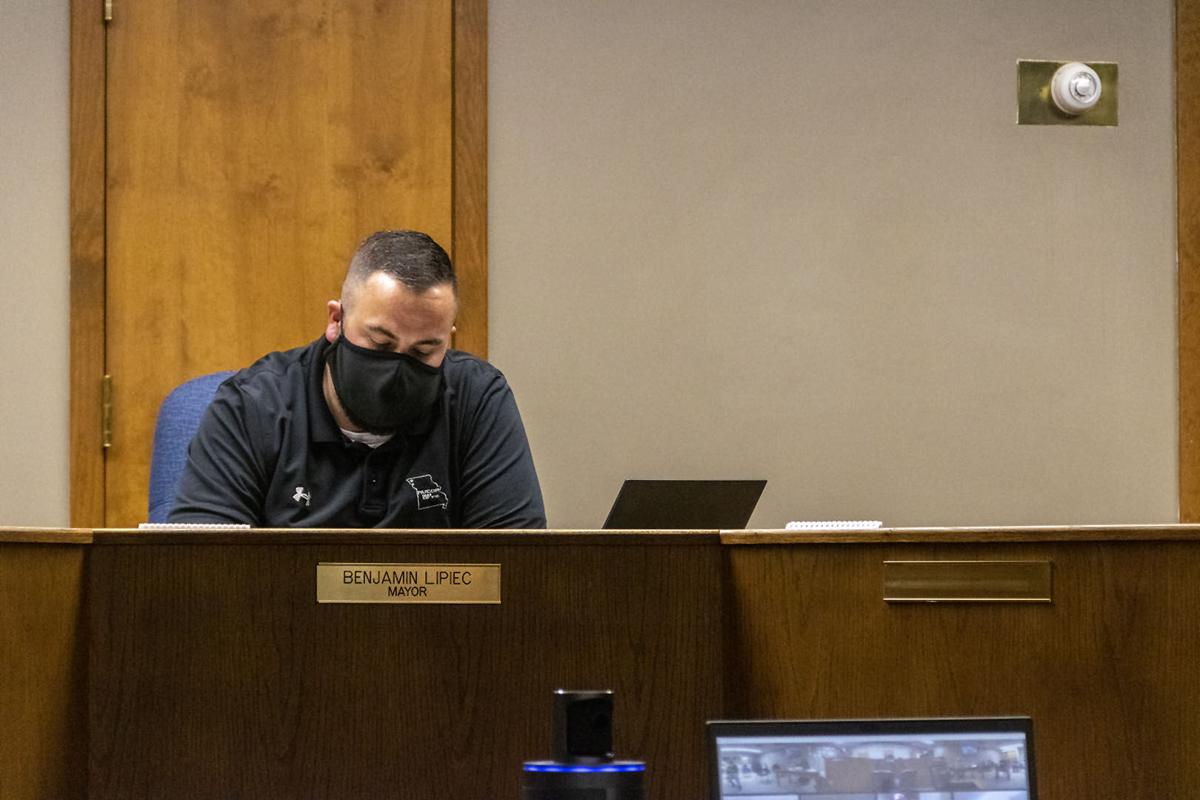 Maryville Mayor Ben Lipiec gazes down at the papers in front of him during Maryville's City Council meeting Nov. 6. Lipiec was the only councilperson who voted against the extension of the city's mask ordinance, which passed 4-1, leaving the mandate in place through the end of January 2021. 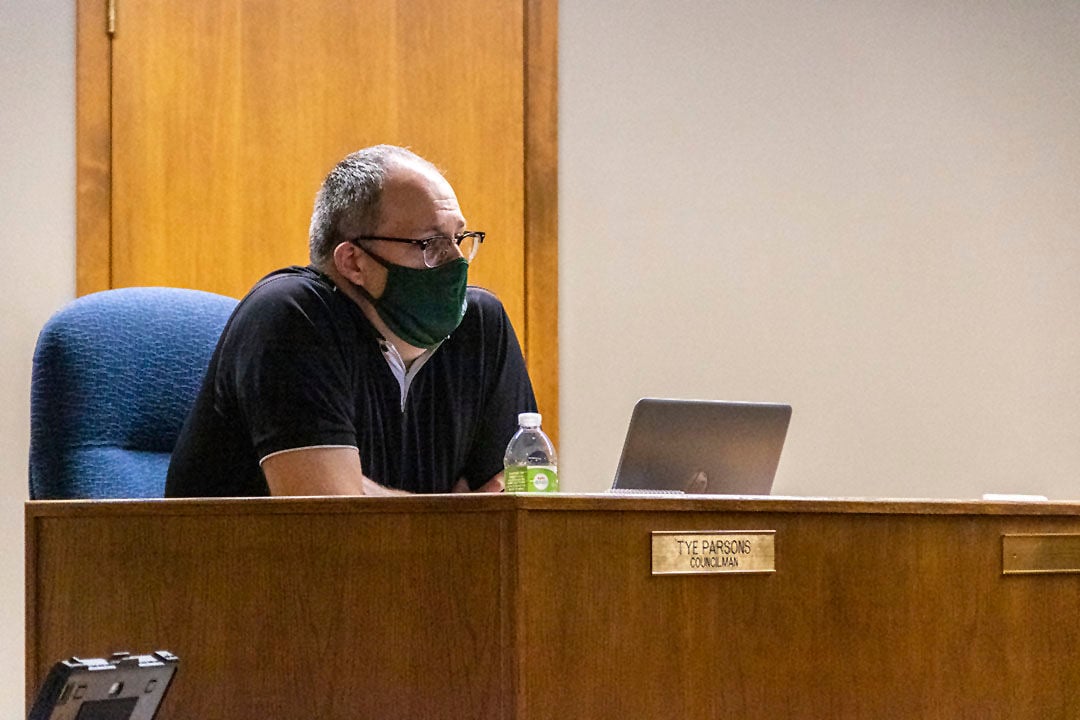 Tye Parsons listens to a report from City Manager Greg McDanel at Maryville's City Council meeting Nov. 9. Parsons, who has become one of the most outspoken councilmen amid the pandemic, moved to extend Maryville's mask ordinance through the end of January 2021. The motion passed 4-1.

As COVID-19 cases continue to spike both across Missouri and within Nodaway County, Maryville’s City Council voted 4-1 at its Nov. 9 meeting to extend the city’s mask ordinance through the end of January 2021.

Councilman Tye Parsons, who has been perhaps the most outspoken member of the Council on the COVID-19 front, moved to extend the mandate after City Manager Greg McDanel provided an update on the latest virus-related figures within Nodaway County and in neighboring Page County, Iowa.

In his monologue to the Council, McDanel noted the grim findings from the Nodaway County Health Department’s Nov. 7 COVID-19 press release, containing the latest available data at the time of publication. The department reported eight new virus cases in the county Nov. 7, bringing the total case count to 1,300 and the active case mark to 266. There are six current virus-related hospitalizations in Nodaway County, where COVID-19 has killed 11 people, one more than it had last week.

The latest release from the Nodaway County Health Department pushed the county’s seven-day rolling average for new COVID-19 cases to 25.71. The active case count in the county hit 296 Nov. 6, the highest total since the pandemic began. And, McDanel said in his update to the Council, the county’s 14-day positivity rate sits at 29.26% — more than five times higher than the 5% positivity benchmark for reopening set by the World Health Organization.

After reading off the latest COVID-19-related data points from around the county and in the Mosaic Life Care system, McDanel reminded the Council that the city’s mask ordinance, first passed in July and then extended in September, was set to expire Nov. 24, a date that coincides with the end of in-person classes at Northwest. McDanel said the health department, the University and Mosaic Medical Center-Maryville had all expressed support for another extension of the ordinance.

“In light of that information, and with some other information that we have, Mr. Mayor, I move to extend the current face covering ordinance … to be in effect through 11:59 p.m. Jan. 31, 2021,” Parsons said after McDanel finished his report on the virus.

The motion was quickly seconded by Councilwoman Rachael Martin, who served as mayor before Ben Lipiec took over in June. After no further discussion, the Council voted on the extension, with Parsons, Martin and Councilmen Matt Johnson and Jason McDowel voting “yes.” Lipiec, one of two councilmen to vote against the last extension of the ordinance in September, was the only member of the council to oppose the extension this time around, offering no explanation for his “no” vote in discussion.

After the public portion of the Council meeting ended, in a break before the executive session began, Lipiec said he was personally comfortable with leaving the decision to wear a face covering up to each individual citizen.

“I speak for, I guess, the other half of — or, the part of the public that’s agai—  I don’t want to say against, but is ready to have the mask ordinance go back to the people,” Lipiec said. “I’ve spoken to different people, different emails we’ve received, you know, people are saying, ‘Let it be the person’s decision; don’t make the decision for me.’ And so, I’ve stood by that for the last two votes and will continue to stand by the fact that I think it needs to go back to the people.”

Parsons, who expressed concern in late October as the city grudgingly hosted the annual Downtown Trick-or-Treat event, and who voted against the Council’s decision to block off city streets for the event, has remained steadfast in his emphasis on public health.

Parsons serves as the grants coordinator at Northwest, where there were 97 active COVID-19 cases among student and staff populations Nov. 7, down slightly from 119 active cases Nov. 6. The University’s active case load dropped into the single digits in early October before spiking again as the month dragged on. Parsons said the growing case count, coupled with the increase in indoor gatherings set to accompany the winter months, prompted him to move to extend the mandate.

“With our rates going up, we’re heading into cold weather and we’re heading into the holiday season, it just really seemed like the right thing to do,” Parsons said after the meeting. “It’s not the right time to pull back on the mask mandate right now. We really need to be diligent. Our health providers in the community — the hospital, the health department — are saying, ‘Please continue this.’ And I think as public officials, we need to listen to what they say because they’re the experts.”

While face covering mandate compliance seems to be slipping throughout the community, Parsons said he hopes extending the ordinance can help maintain compliance rates of 70-80%. The councilman addressed concerns with Maryville Public Saftey’s enforcement of the mandate, echoing sentiments often expressed by McDanel, noting that MPS first aims to educate residents who violate the ordinance in an effort to gain compliance.

But Parsons said MPS may soon begin enforcing the mandate with fines, which can cost up to $100 for private residents and $250 for businesses found noncompliant with the ordinance. It’s been more than three months since the Council first passed the ordinance in July. Parsons said residents should be aware of what the mandate requires by now, though he did not provide a definitive timeline for when the mandate might be enforced via fines.

“It remains to be seen,” Parsons said. “But I wouldn’t be surprised if we’re getting close to that.”

After discussing COVID-19 and voting to extend the face covering mandate in a process that look less than six minutes, the Council spent a significant portion of its meeting — more than 20 minutes — examining and voting on a set of ordinances related to Vintage Estates, a cooperative housing alternative expanding in Maryville for residents 55 or older.

The Council approved three action items related to the cooperative housing community, which Harvest Investments LLC officials have been working to bring into Maryville for close to a year. Voting unanimously, the Council passed an ordinance to approve the Planned United Development for the Estates, which will be built north of College Avenue and west of Icon Road in Maryville.

The Council also voted to rezone the property, which sits in the area between Donaldson Park and the Maryville Country Club, repurposing the property from an Agricultural Zone to a Multi-Family Residence Zone and Restricted Business District, allowing Harvest Investments to build the Estates there. And the Council approved an ordinance to execute a development agreement with Harvest Investments, in which the city will pay and reimburse up to $200,000 to the developer for the installation of 2,400 linear feet of new sanitary sewer service, McDanel said.

“That $200,000 payment will be made out of the city’s water/sewer fund, which includes, this year, $400,000 for infrastructure related to economic development,” McDanel told the Council. “With that, the only other thing we should probably mention is that the Planning and Zoning Commission met on Oct. 14 and they actually recommended approval on all three of these items.”

When completed, the development will come with 24 patio homes, a type of line most often associated with condos, according to the city’s ordinance. The development will also provide amenities to patio home owners, including custom designed homes, a community clubhouse, an outdoor pool and a fitness center.

Additionally, the Council approved appointments to six city boards, commissions and committees, including the Maryville Tourism Committee, the Board of Zoning and Adjustment, the Maryville Housing Authority Board, the Board of Code Appeals, the Planning and Zoning Commission and the Mozingo Advisory Board. After appointments, the Mozingo Advisory Board still has one vacant seat, which the city intends to fill by Dec. 14.