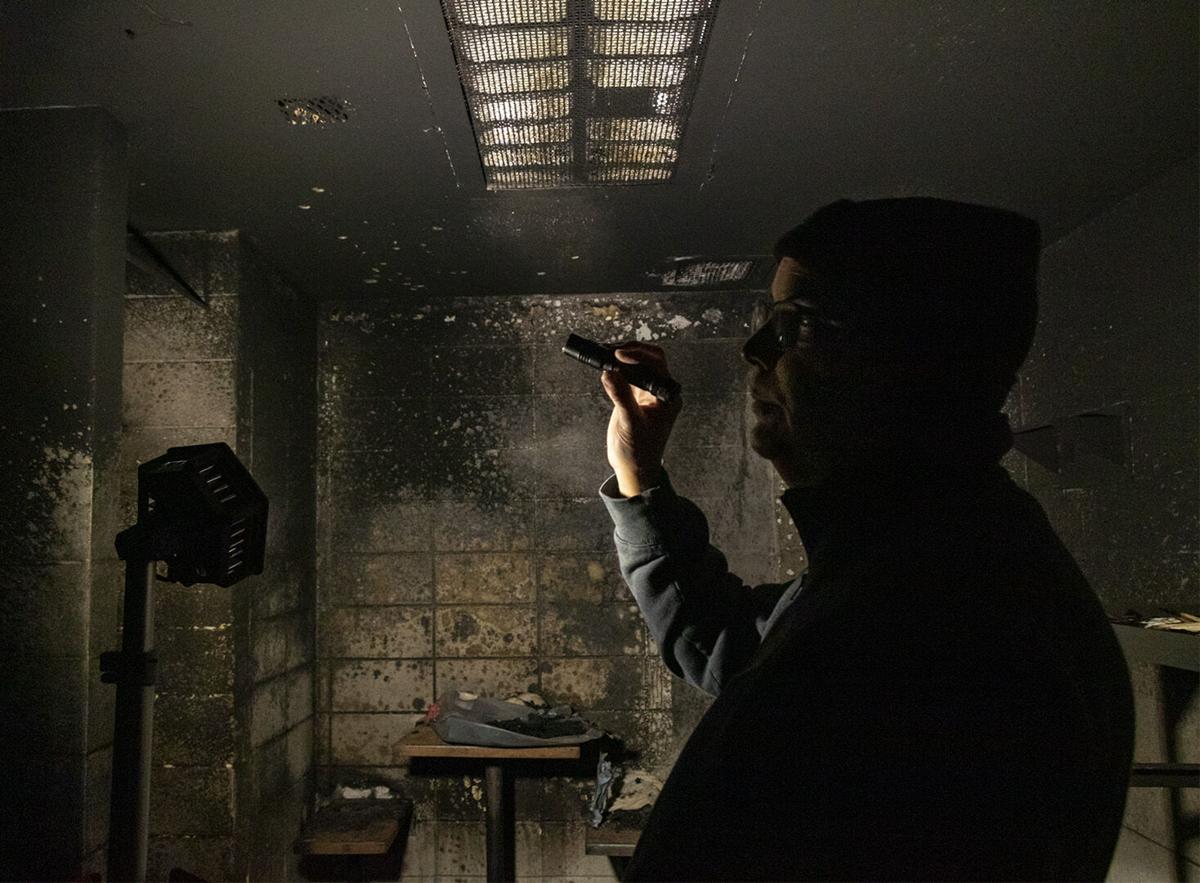 Nodaway County Sheriff Randy Strong points to fire damage in a jail cell where the fire started Jan. 14. The fire and smoke damage ruined many systems the jail had in place including a T.V. monitor and security cameras. 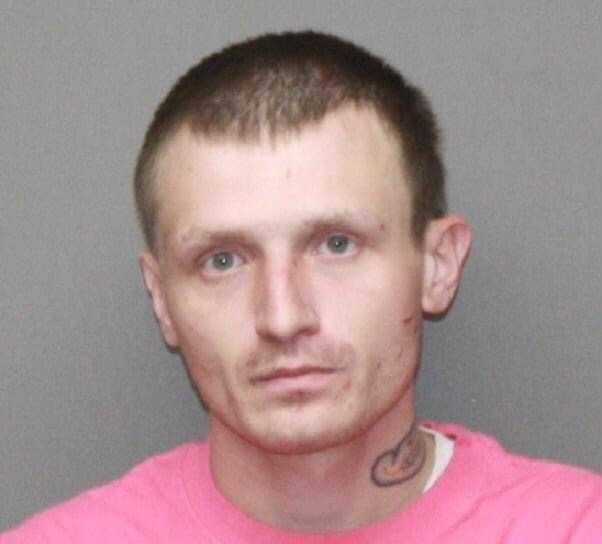 Mark Bentley, of Rulo, Nebraska, has been charged in the investigation of a Jan. 14 fire at the Nodaway County jail. 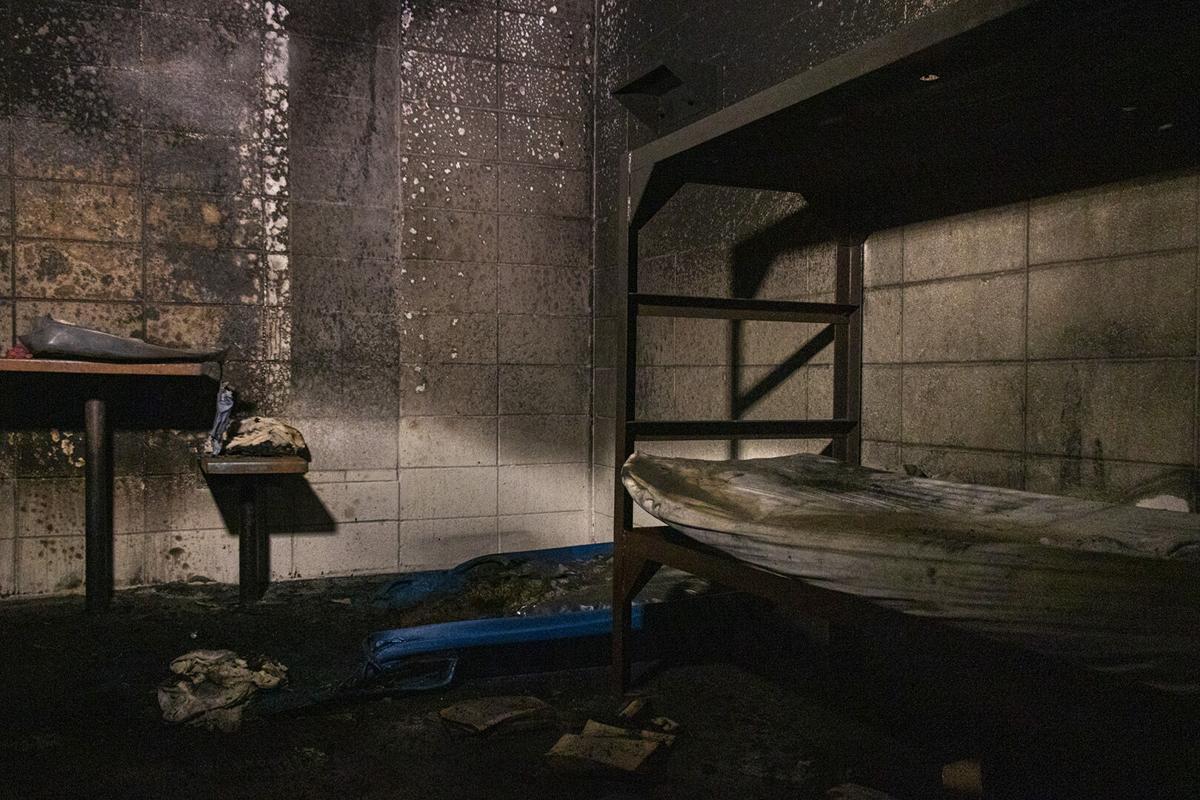 Bunk beds inside a holding cell at the Nodaway County Jail show the damage left behind after a fire was started in the cell Jan. 14. Employees were able to evacuate all inmates and transfer them to nearby counties.

A man has been charged in the investigation of a Jan. 14 fire in the Nodaway County Jail.

Ethan Bentley, 29, of Rulo, Nebraska, was charged for allegedly starting an arson fire in the jail at approximately 7:57 p.m. Jan. 14.

Nodaway County Prosecuting Attorney Caleb Phillips formally charged Bentley with arson in the first degree, a class B felony, in that the defendant knowingly damaged an inhabitable structure, and did so when people were present, thereby recklessly placing such people in danger of death or serious physical injury.

At the time of the fire, Bentley was being held in the jail on charges from a Jan. 6 incident in Maryville, for which he was charged with two counts of first degree assault, a class A felony, a class D felony of domestic assault, first degree property damage and a class E felony of resisting a lawful stop.

Bentley's arrest was preceded by a pursuit in which he refused to yield, and allegedly drove head on into a Maryville Police car involved in the pursuit. Both vehicles were totaled.

During his arrest Bentley is alleged to have assaulted an officer.

The arson investigation was conducted by the Missouri Fire Marshall's Office and Investigator Travis Cochenour of the Nodaway County Sheriff's Department.

An intentionally lit fire erupted in the annex of the Nodaway County Jail Jan. 14, forcing guards and prisoners to evacuate.

Nodaway County Sheriff Randy Strong said the fire was started by an unnamed inmate being held on previous charges in the annex, an area where prisoners are held when first taken into custody before being introduced into the general jail population. No injuries have been reported, and as of Jan. 19, the fire is still under investigation.

Strong said two guards on duty at the jail spotted the fire on the monitors in the control room. Strong and two other deputies were working that night when they were alerted of the fire.

“When we got into the jail, the control room already had smoke in it,” Strong said.

Strong noted that the entire event was captured on video that could be seen on the monitors of the control room.

The sheriff also said when he and the two deputies saw smoke on the monitors coming from the annex they immediately went to evacuate the room. Once they emptied the annex, jail staff continued to evacuate the general population of the county jail out of their designated rooms.

“It took us about eight to nine minutes to empty all of the inmates out,” Strong said.

Phil Rickabaugh, the chief of Maryville's fire division, said he had 15 firefighters on scene after they received notice of the fire.

Rickabaugh and his firefighters arrived at 8 p.m. after guards first noticed the fire at 7:57 p.m. The division had the fire under control by roughly 8:10 p.m. Rickabaugh said it took about an hour to get all of the smoke out of the building.

The fire chief also noted that due to the way the building is set up, the firefighters were able to keep a lot of the smoke away from the general population of inmates.

“Within a few more minutes, it could’ve been a whole different scenario where we would have had a lot more smoke,” Rickabaugh said.

The ambulance checked out a few of the prisoners while fire division quickly put out the flames.

According to The Maryville Forum, Strong said the jail did not have a sprinkler system and that the jail has narrow hallways built to accommodate one-way traffic only. The building's doors automatically lock and have to be manually unlocked every time they are used.

Rickabaugh said the fire division stayed on sight until about midnight Thursday to assist with the investigation.

Strong said while jail staff were trying to evacuate prisoners, the fire divsion was trying to get in to put out the fire. The tight spaces proved it difficult to get everyone out while firefighters made their way into the building.

“It proves something that we have been concerned about for some time and have been trying to work on to get improvements,” Strong said. “That was our biggest fear — having a fire in the jail and evacuation.”

Strong said he met with some of the county commissioners in an emergency meeting where he and others who work within the county jail brought up some issues with the jail’s structure.

He noted that the county and Maryville Public Safety will be looking at what physical changes can be made to the building to ensure there is no loss of life in future fires, along with reviewing fire evacuation procedures to see what improvements can be made.

Strong said they also plan to install a working sprinkler system, something that was not installed before Strong entered his role as sheriff.

“If we had had a sprinkler system in that cell, it would have suppressed the fire very quickly,” Strong said. “We wouldn’t have had so much smoke.”

Nodaway County aims to reopen its jail by mid February

For the past three weeks, county staff and local businesses have been repairing damage from a Jan. 14 fire that engulfed one of the jail’s cel…