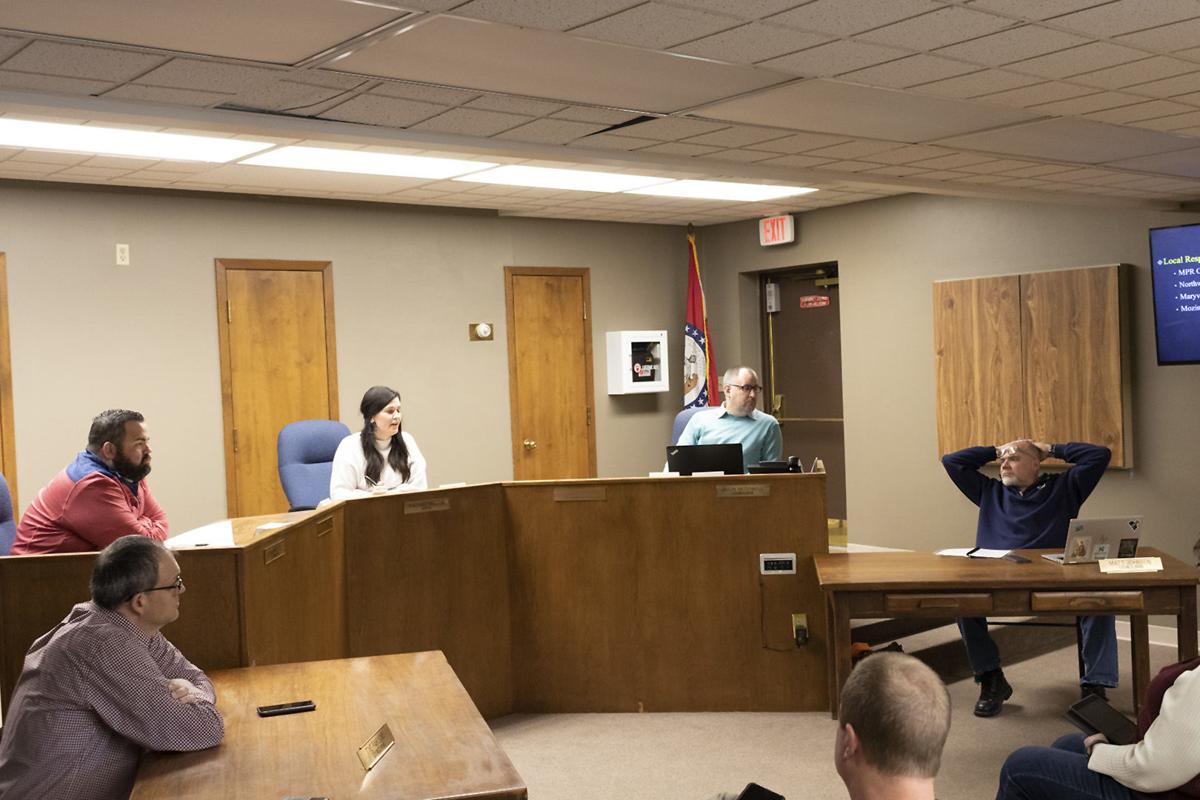 The city council addressed how the coronavirus is affecting the county and city at its March 18 special meeting. The council will have an additional meeting March 19 to draft an official resolution. 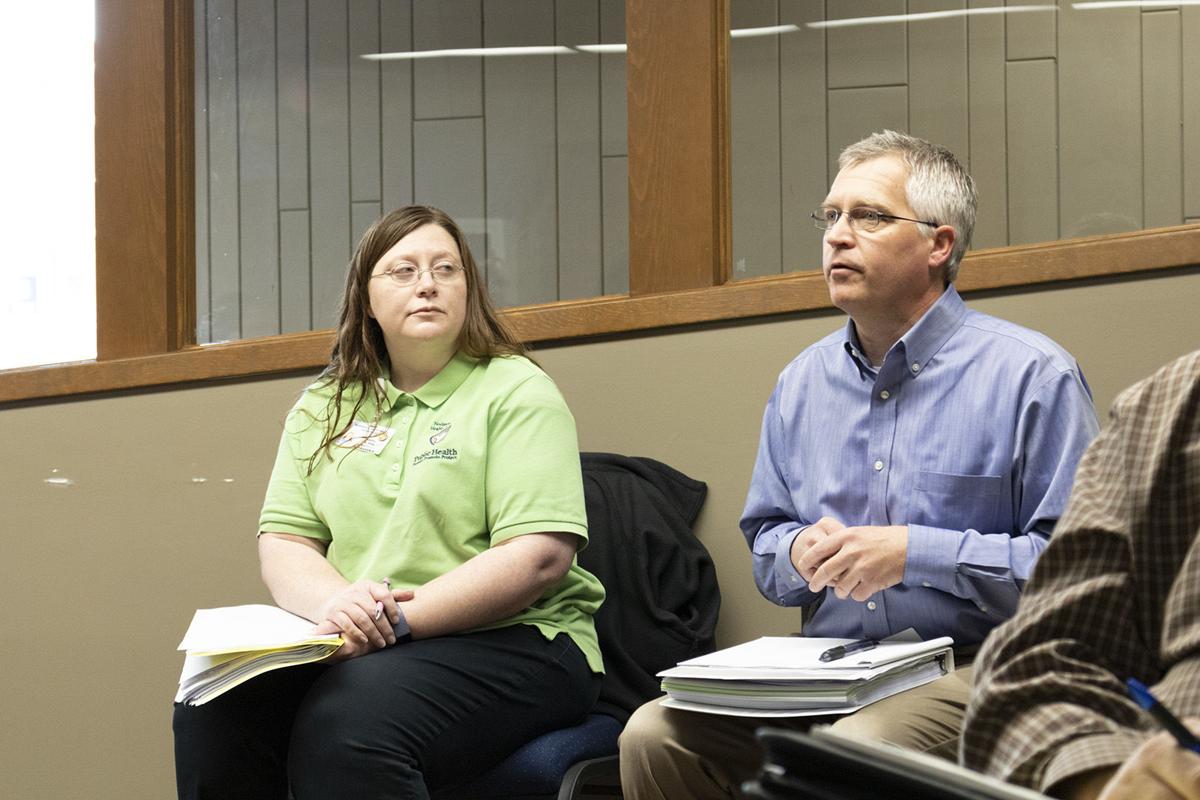 Public Health Nurse Supervisor Tabitha Frank and Administrator of Nodaway County Health Center Tom Patterson attended the special city council meeting March 18, where the council was informed emergency provisions acted on by staff are to be in conjuncture with the NCHC. 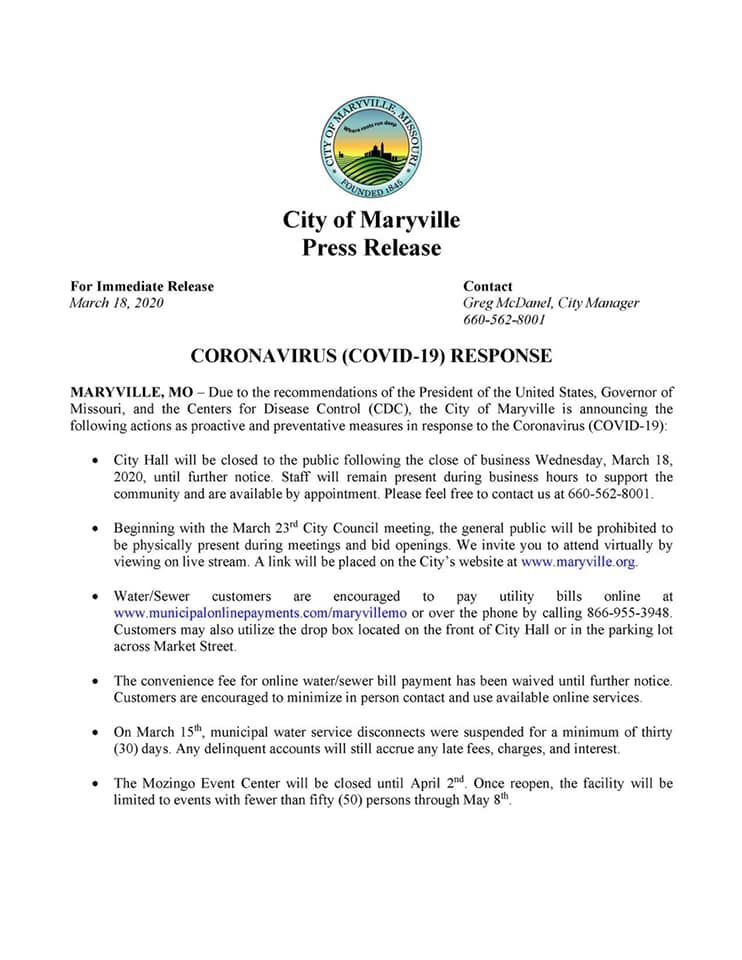 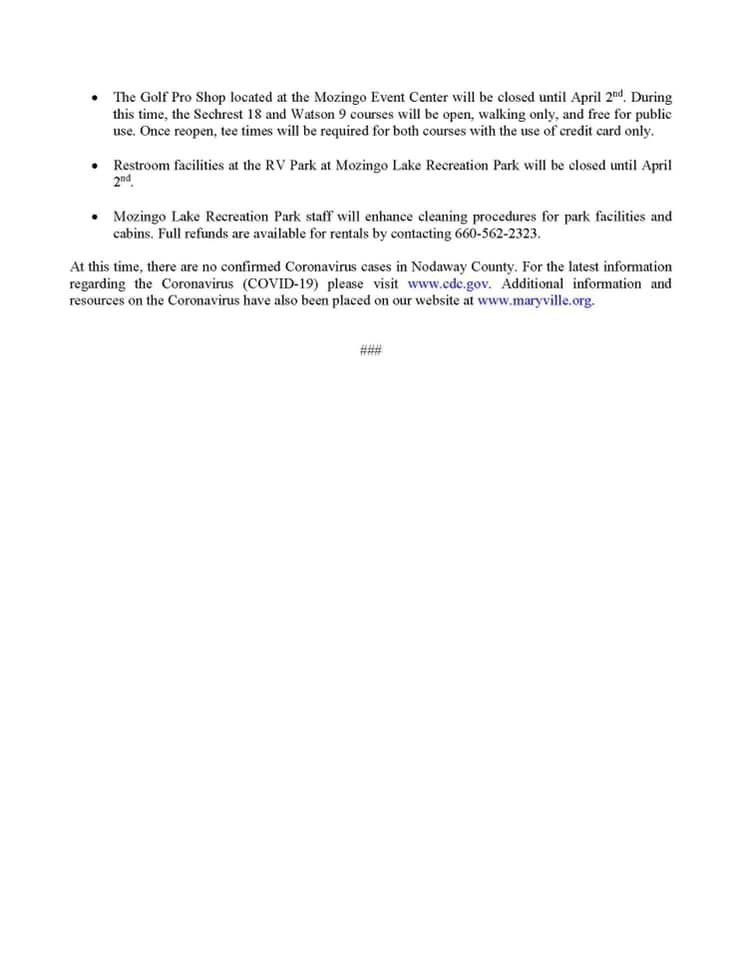 The city council addressed how the coronavirus is affecting the county and city at its March 18 special meeting. The council will have an additional meeting March 19 to draft an official resolution.

Public Health Nurse Supervisor Tabitha Frank and Administrator of Nodaway County Health Center Tom Patterson attended the special city council meeting March 18, where the council was informed emergency provisions acted on by staff are to be in conjuncture with the NCHC.

The city of Maryville has decided to implement several recommendations for citizens regarding the monitoring of COVID-19, a pandemic that’s effects are now touching small rural communities during a wavering national economy. Of these recommendations, the most heavily discussed were the advice of limiting gatherings to 10 people or less wherever possible and the impact provisions may have on local businesses.

Following a March 18 meeting where the city council and staff discussed Center for Disease Control and local health center guidelines, the city council plans to draft a formal resolution, which would provide overall locality guidelines for businesses and citizens, March 19.

The council also discussed holding future city council meetings by invitation-only, and live streaming on a platform such as Facebook Live.

Patterson said the response to the outbreak is being left up to local governments in Missouri, with limited formal guidance from the governor or other health professionals.

“The situation is unique,” Patterson said. “It’s different here than in St. Louis, for example… it wouldn’t be fair from a state perspective to hand something down that is applicable to St. Louis that you would have to do here.”

Patterson said that as of March 18, there are no local ordinances or rules passed in the region strictly adhering to guidelines handed down by the governor or CDC.

“Currently we are sticking with that guidance, that we would strongly encourage people to postpone or restrict gatherings of 10 or more,” Patterson said.

As of now, in conjunction with the Nodaway County Health Center, the city of Maryville is not pushing for a mandate with the formal resolution guidelines, but Patterson said it has the possibility to change.

“A lot of (CDC recommendations) is based on community spread of the disease, so you’ll see areas of the countries that are mandating that,” Patterson said.

The council and staff spent 24 minutes out of the hour-long meeting discussing the Nodaway County Senior Center and how it would be affected if the limit of 10 people gathering at a time was adhered.

Councilman Benjamin Lipiec said he saw 35 to 40 vehicles parked outside of the Senior Center when he made his way to the 12 p.m. meeting March 18. Concerned for those most at risk for contraction of the coronavirus, the elderly population, the council discussed ways to help the Senior Center if it were to temporarily limit in-person operations.

The council discussed its approach to programs like Meals on Wheels, which necessitate community volunteers who are often at-risk contractors of coronavirus, and determined the city may have resources to help seniors get their meals delivered to them.

Martin said implementing the recommendations through the resolution would provide a way for citizens to hold one another accountable.

“I’m more afraid of regret than I am of unnecessary precaution,” Martin said. “That’s how we have to think when we are writing (the resolution).”

White discussed what the GMCC is doing to help local businesses in the recent state of uncertainty. Since several restaurants have made the transition for to-go orders only, some small businesses have begun asking for guidance as well.

White said the chamber has been sending out emails to business owners with information on a brand new web page titled “Maryville Strong”, providing local business operation updates, remote working tools for employees and information about online communication tools that are easy to use.

“We have seen some businesses making their own decision to close their doors for their staff,” White said. “Most of the businesses that are doing that right now have the ability to make most of their sales online.”

White said the GMCC won't be able to track economic injury for some time because of lack of data early in the process, but that there staff who will check into that impact and how to help businesses who incur losses.

“From the federal level we are expecting — numbers that were given on Monday — about a 10% economic change,” White said. “In conference calls I have been in, they haven’t addressed what it should look like state-wise.”

Assistant City Manager Ryan Heiland discussed what the city has already done in response to the coronavirus outbreak. Measures already taken include the closure of the Community Center, Maryville R-II and other county school district closures and Mozingo Lake Recreation Park cancelling events with implementation of restricting groups beyond 10 people.

Considering what has already been done to combat the pandemic, the city council will draft a formal resolution and focus discussion around proclamation of emergency at its March 19 special meeting.