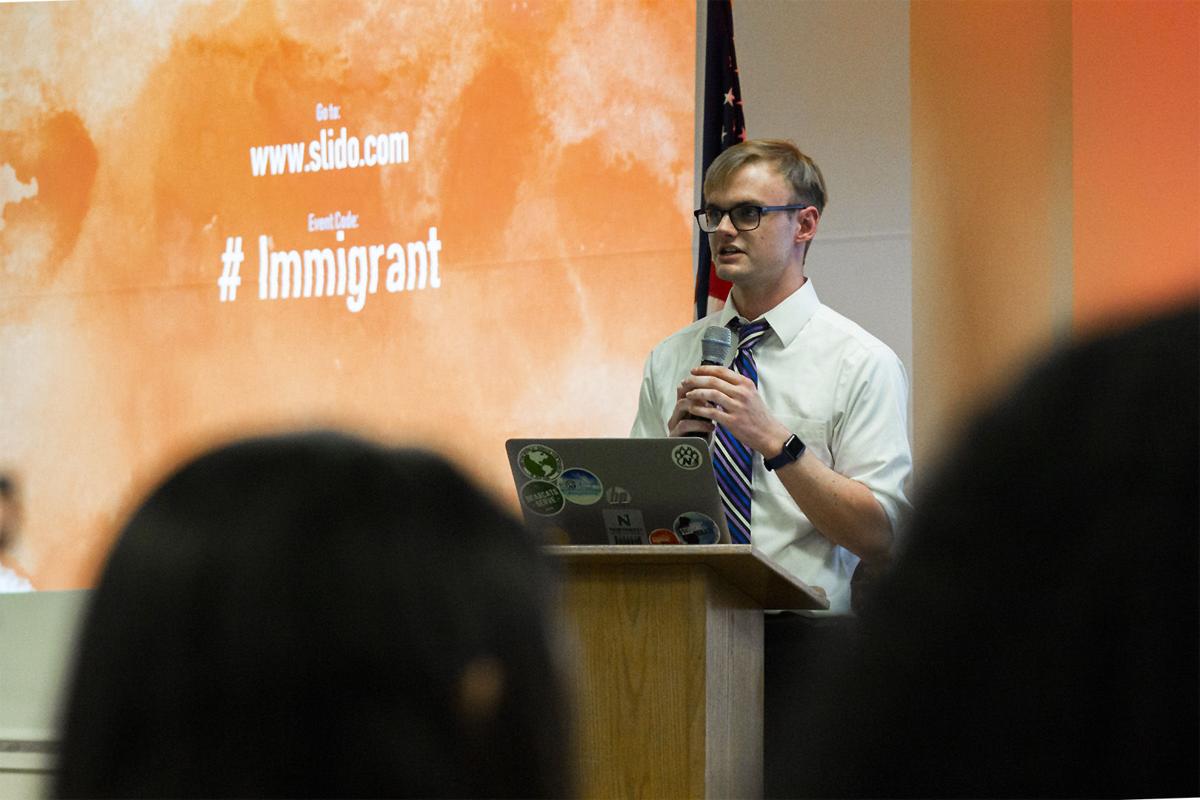 Junior James Palmer agreed with Ryan Lanman that immigration has not been a very debated topic during the 2020 presidential elections at the Student Senate hosted debate Feb. 27 in the J.W. Jones Student Union Ballroom. 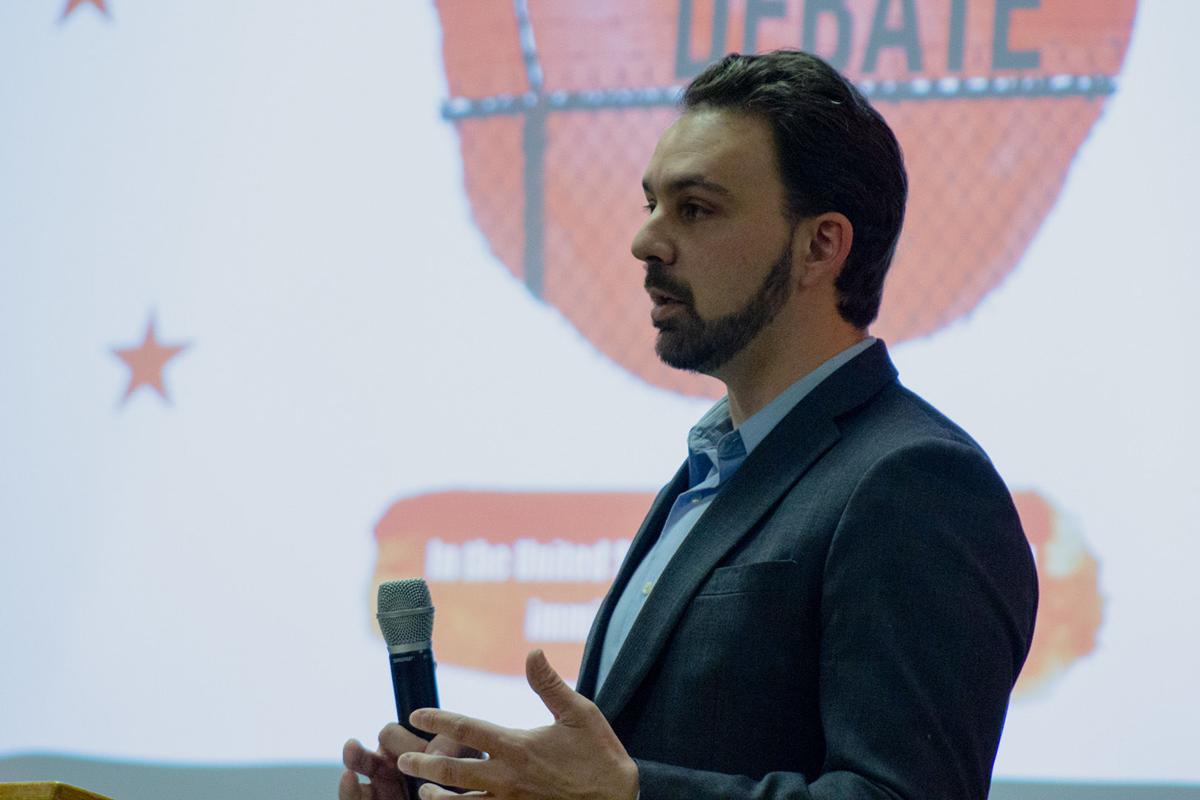 Senior Ryan Lanman voiced his opinion for immigration in the United States to be more regulated on the Student Debate held Feb. 27 in the J.W. Jones Student Union Ballroom.

Junior James Palmer agreed with Ryan Lanman that immigration has not been a very debated topic during the 2020 presidential elections at the Student Senate hosted debate Feb. 27 in the J.W. Jones Student Union Ballroom.

Senior Ryan Lanman voiced his opinion for immigration in the United States to be more regulated on the Student Debate held Feb. 27 in the J.W. Jones Student Union Ballroom.

Junior James Palmer and senior Ryan Lanman disputed immigration policies at the Student Senate debate in the J.W. Jones Student Union Ballroom. Both students discussed their sides of the topic but also agreed on several issues.

Palmer and Lanman were selected to be the debaters by submitting an application and participating in an interview with Inclusion Chair sophomore Joseph Etheridge and Inclusion Vice Chair junior Jenni Gutierrez who hosted the February debate.

The fundamental question in the debate was, “To what extent should immigration be regulated in the United States?”

Lanman began the debate by giving his general views on immigration and what ideas support those views.

“We are a nation of immigrants. We are also a nation of citizens and laws too. So, there’s a balance there that we have to achieve,” Lanman said.

Palmer then gave his views on immigration.

“I think we’re (the U.S.) acting like we shouldn’t be looked at as a beacon of hope for refugees. … I believe that we make it too tedious for people from other countries to come to America,” Palmer said.

Lanman and Palmer both came to the debate prepared. Palmer used a laptop to aid him in his debate. Palmer would look up statistics while in the middle of the debate to help support his answers even more than the information he had gathered prior to the event. Lanman used no devices to aid him throughout the debate.

Despite being prepared to argue their side, Palmer and Lanman agreed on several issues throughout the debate, such as the notion that people born on U.S. soil should be considered citizens, whether their parents were born in the U.S. or not.

Palmer and Lanman both agreed that birth tourism is regulated to the extent that it can be regulated. This question was posed by an audience member through Slido, which is an interactive polling web app.

Palmer and Lanman also agreed immigration has not been an important topic during the 2020 presidential elections.

Lanman said he thought the issue had been put off by Congress for several years now and was not going to be an important topic in this year’s election.

“I agree. I think that the time for the immigraton discussion has kind of passed, unfortunately on a national level for now,” Palmer said.

Palmer and Lanman also agreed that the national government should be handling immigration policies rather than the states.

The issues Lanman and Palmer did not agree on led to civil discussions and rebuttals throughout the debate.

One point Palmer made was people should not be in cages, no matter if they are an illegal immigrant or not. Lanman came back and said the U.S. does not lock people in cages who take the legal route to coming to the U.S. Lanman said people who try to circumvent the process are the ones who are imprisoned.

According to the American Immigration Council website, a refugee is a person who is unwilling or unable to return to their home country, and they can not obtain protection in that country because of past persecution or a well-founded fear of being persecuted in the future “on account of race, religion nationality, membership in a particular social group, or political opinion.”

According to the United States Department of Homeland Security, illegal immigration is, “all foreign-born non-citizens who are not legal residents.”

“I definitely agree that maybe histeria goes both ways on an issue such as this,” Palmer said.

The debate had lower attendance than the last two with 26 students attending. Some students thought that the debate went well.

“I thought it was really good. I thought they debated topics that were relevant,” senior Zach Hougland said.

According to an article by The Atlantic, immigration is such a divisive issue because it is not monolithic. There are many aspects to immigration that have to be addressed and not just one question will answer the issues surrounding immigration.

According to an article from the U.S. News website, President Donald Trump has been enforcing immigration policies and in August 2019, the Trump Administration announced a new rule that lifted restrictions on how long children illegal immigrant children can be detained by the U.S. government.

Democratic candidates Joe Biden, Michael Bloomberg and Sen. Bernie Sanders (I-Vt.) are all seeking to create policies that would give most illegal immigrants citizenship and do not discriminate against illegal border crossing. Biden plans to look at the root causes of immigrants fleeing their home countries. Sanders looks to expand DACA and restructuring ICE.