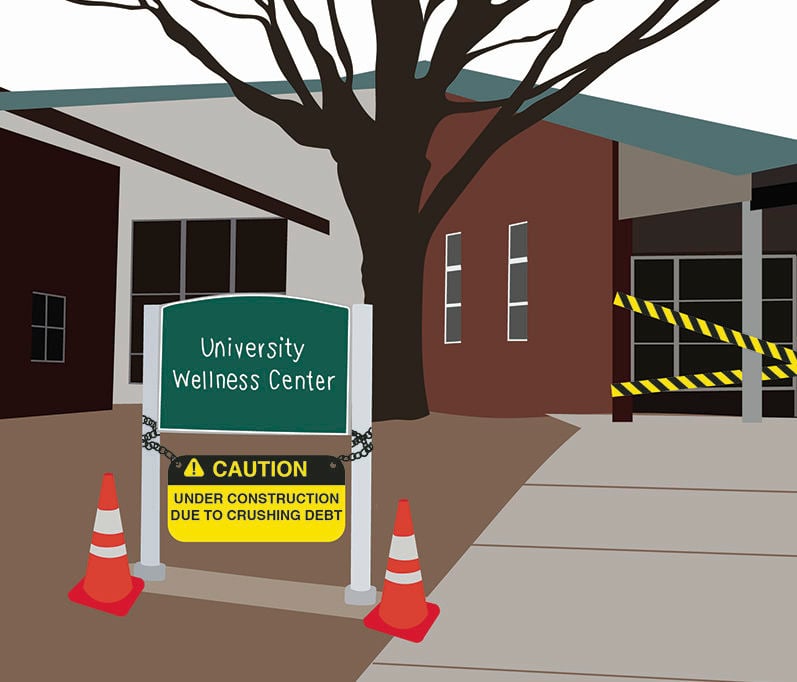 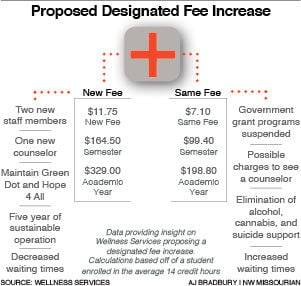 An increase in the designated fee for Wellness Services was proposed to Student Senate Feb. 18 as a way to combat a heavy deficit the office is recurrently adding to, an issue Wellness associated with lack of funding and the rising cost of healthcare for college students across the nation.

“We are at the point where we will have to change services if we don’t raise the fee.”

Vice President of Student Affairs Matt Baker presented state-wide statistics and institutional budgetary information to Student Senate that further explained the reason for an increased fee proposal, focusing on how Wellness Services is funded completely by the designated fee, insurance billing and grants.

Even with allocated grant money, the office is seeing a deficit that has been a challenge to overcome with rising healthcare costs.

“We are at the point where we will have to change services if we don’t raise the fee,” Baker said. “(The Wellness Center) does not receive auxiliary money; it’s based on revenue they generate through insurance billing and fee billing. That’s their budget.”

In fiscal year 2019, Wellness Services brought in $1,062,678 in fee revenue. The office’s total expenditures came out to be more than what it had in the budget, leaving a $211,077 deficit. The largest expenditure category for Wellness is salaries and benefits for employees, which totaled $1,194,819.

Both deficits are paid by an emergency fund, with money allocated toward the possibility of a deficit, but those funds are limited in nature, as they are meant for other programs and services Wellness offers students.

Baker said without the passing of the proposed increase in the fee, there is a possibility for programs like Green Dot and Hope 4 All to be eliminated because of the uncertainty of grant funds. The extra $4.65 per credit hour would sustain certain services and pose the possibility for additional programs and staff members, the most notable of which being a new counselor.

The wellness fee has increased in increments throughout the past 10 years, with the most recent increase of $1.60 in 2014 to make it $7.10 per credit hour.

The new fee increase proposal to $11.75 is projected to sustain operations for at least five years.

“(The $4.65 increase) would yield a minimum of two additional staff members, so we would maintain the two grant positions,” Baker said.

He went on to explain the grant positions, which consist of two $300,000 grants that will run out over the next year and a half. The fee increase would provide enough funds to continue those programs when the grant funds expire.

Baker said the fee increase would aid in addressing wait times for certain services like counseling, address growing mental health needs and have a sustainable operating model taking into account inflation in healthcare for at least five years.

“This is enhancing the wellbeing of our student body, not just maintaining the good work we do now,” Baker said.

The Wellness Services fee has increased in intervals over the past 10 years, with its most recent being an increase to the $7.10 rate in 2014. Then, they addressed similar issues relating to the rising cost of healthcare and considered input from students on adding services like annual outreach and events that Wellness has on the campus calendar.

Baker said the new five-year projection would be sufficient for Wellness to operate in a more comfortable state while maintaining services students use every day.

In the Feb. 18 discussion, several student senators voiced concerns as well as comments of approval regarding the increased fee.

“We are focused on the students here at Northwest,” Thompson said. “One of the biggest things I want is quality… quality for our students.”

Several members of the Wellness Center staff attended the Feb. 18 Student Senate meeting. Of the staff, Executive Director and Assistant Vice President of Health and Wellness Gerald Wilmes spoke the most, largely toward the overall vision of the office.

“For the last 15 years, we have built and grown what’s called an integrated service,” Wilmes said. “It’s considered the best practice model, where our counseling staff and clinic staff are in the same facility.”

Wilmes said the integrated model means when a student goes in for something minor at the clinic, they also offer screenings for drugs, alcohol and suicidality.

Wilmes further explained the model to Student Senate with an example from when a student came in for recurring headaches and was asked if they had suicidal thoughts, which they answered yes to. The student was then able to see a counselor that same day, meeting more than one need of that student at one time.

However, Wellness staff said the integrated model is constricted when it is overbooked and too busy to get people in when needed.

Wilmes said there is research showing most people who commit suicide see a primary care provider in the 30 days before their death.

“The science behind that is why we do these screenings,” Wilmes said. “If we have the best quality of our clinic and the best quality counselors around, which I believe we do, but we are disconnected and there is not that integration … you don’t get that quality service.”

Student Senate members began sharing their thoughts on the fee increase after hearing from Baker and Wilmes. Touching on how healthcare costs are rising in America, International Representative junior Sneha Ojha said Wellness Services is one of the best features of Northwest’s campus for international students.

“A lot of international students, and me myself, have utilized their services various times,” Ojha said. “For our university to provide this for us, it’s a very big thing. However, if I were to pull out my phone right now and schedule an appointment for anything, I will have to wait.”

“We’ve had a lot more people trying to schedule appointments in crisis mode,” Moore said. “Getting them the resources they need is super important.”

The proposed fee increase would provide for programs that were suggested to the office by students, as well as the likelihood of wait times for current options to fall.

But with an increase in designated fees for one aspect of University operations, those drafting the budget are also made to consider other areas that may need fund adjustments.

Acknowledging these categories, Student Senate Vice President senior Kirayle Jones said there is a possibility for issues in funding priorities.

“How many of you actually go to the Rec Center? That’s something to think about,” Jones said. “How can we match other things on campus and where they are at for funding and still give everyone the help and experience they need?”

Baker talked about the designated fee as a whole prior to the Wellness fee proposal, saying the University is always battling the issue of state funding coinciding with affordability.

“We are very, very concerned at Northwest about the cost of attendance,” Baker said. “It’s a dynamic game when you look at state appropriations, tuition that’s controlled.”

Baker said 98.4% of education general revenues are controlled through state appropriations and tuition and fees, both of which the state determines. The designated fee comes into play to make up for any lack of funds, but it is required by the state for Student Senate to vote on any proposals from the Finance Office and Student Affairs regarding the fee. After Student Senate votes and drafts its recommendation, it is sent to the Board of Regents for approval.

Baker said it is important for students to understand the context of the fees they are paying and voting to approve or disapprove of.

Referring to a graph depicting the changes in state and institutional funding since 1990, Baker said Missouri is somewhere in the middle of the road when it comes to state funding.

“What has changed since 1990 is not what it costs to educate a student; it’s who’s paying it,” Baker said. “Missouri has lowered the appropriations for state schools. That’s a fact, not a criticism. … that’s just what’s happened. Missouri is doing a lot better than some states and worse than other states. Cost of attendance is somewhere in the middle.”

Student Senate will vote on the increased Wellness fee at its Feb. 25 meeting. Its recommendation would be considered by the Board of Regents at its March 19 board meeting, which, if approved and implemented, would bring the total designated fee for Wellness to $11.75 per credit hour.