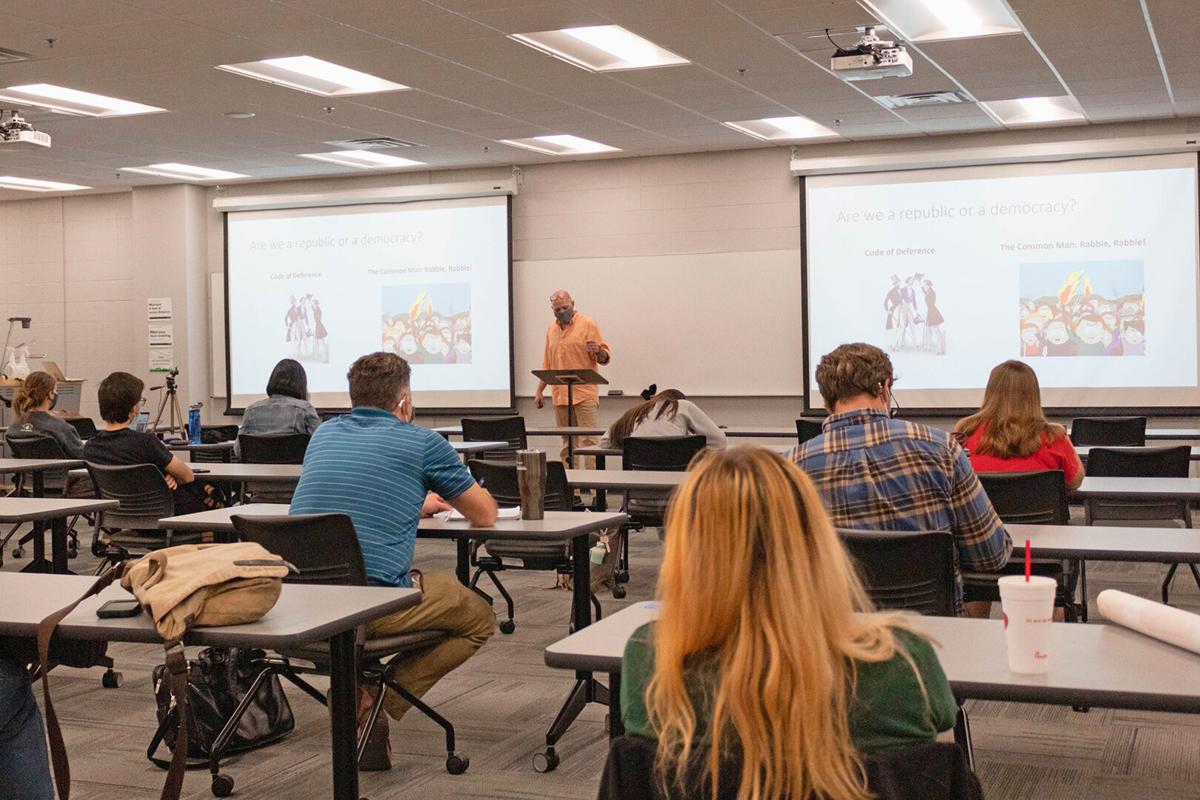 Matt Johnson gives a presentation to students and faculty members on the right to vote in Valk Sept. 17. Johnson gave the historical background on how the United States has changed who can vote, the laws put in place for voting and the dates to be registered to vote by, for the upcoming elections in Missouri, Iowa, Kansas and Nebraska. 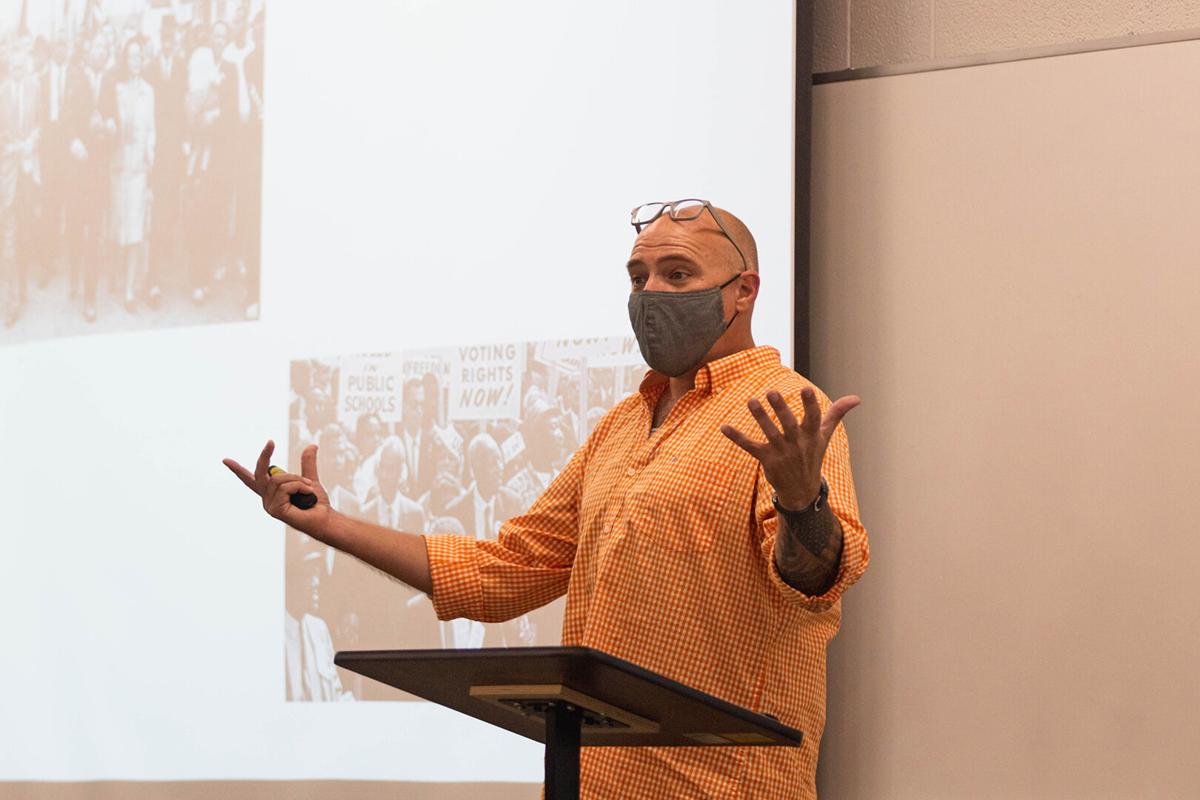 Matt Johnson explains laws and regulations put in place for equal and fair voting for every citizen. Johnson's presentation included the Jim Crowe Laws and how women were given the right to vote.

Voting hasn’t always been a right for everyone in America. Years of strife in the women’s suffrage movement attests to that. On Sept. 17, Northwest Instructor Matt Johnson began his speech in the latest installment of the University’s “Occupy Valk” series by promoting political engagement for everyone.

Johnson said the combination of what was happening in the country, with the fact that this is an election year, made it seem like the perfect time to say something.

Johnson began the presentation by saying, “I have a passion for the Constitution.” This fact became evident quickly, as the first slide was about the beginnings of the Constitution. From then on, history and how the nation got to where it is today was the main focus of the Sept. 17 session of Occupy Valk, titled “Fight for Your Right to VOTE.”

Throughout his presentation, Johnson focused on the past struggles Americans had to face to gain the rights to vote they have today. Johnson highlighted key parts of American history that led to everyone having the same voting rights such as the Women’s Suffrage Movement, the Civil Rights Movement and passing Amendments 15 and 19.

To highlight the nuances of the system in which we operate, Johnson posed the question “Are we a republic or a democracy?” He briefly explained that a republic is a government where elected officials govern the people, and that a democracy is where the people govern themselves.

In America, he said, we are a democratic-republic, a system in which the people still govern themselves, but elect officials to create the laws.

The focus of the presentation then turned to the right to vote for Black people.

Johnson explained the 15th Amendment passed with the principle that a person shall not be denied the right to vote based on race. However, soon after, the Jim Crow laws took into effect to stall the reconstruction of the Union after the Civil War, and to still make it difficult for Black people to vote.

Johnson then talked about the Civil Rights Movement and how it was not only seen nationally, but seen internationally. He discussed how the movement put pressure on the U.S. government to make a change, making way for the Voting Rights Act in 1965, which removed the obstacles Black people had to face to be able to vote.

The presentation then focused on the Women’s Suffrage Movement and the actions women took to make a change. Eventually, the U.S. government acknowledged women as equals. The 19th Amendment had passed.

Johnson talked about these things to show how the United States improved through time, and to show always that, “the way we are supposed to be, is just over the horizon.”

Johnson also discussed the 2000 election, and how it pointed out the multitude of flaws in the election process, and that later in 2002, Congress helped fix those problems.

Soon after, Johnson told his favorite story of the night. He was inspired by a man named Gregory Watson, who as an undergraduate for the University of Texas, unearthed the “Ghost Amendments,” and found an unratified amendment.

Watson decided to try to get this amendment ratified, which ended up being the 27th amendment, making it impossible for politicians to vote themselves a raise. Johnson told this story of Watson to prove that one person can make a difference, because Watson was one person, by himself, with motivation for change.

To end his presentation, Johnson gave important dates on registering to vote in Missouri, Kansas, Nebraska, and Iowa.

Dane Stiles, a student who attended the previous Valk session, said he enjoyed the message.

Lauren Earnest agreed, and said the message seemed well received by those who went.

“Johnson made it seem more like a persuasive speech, and trying to get people to vote,” Earnest said.

Stiles, Earnest, and another Northwest student, Jessica Davidson are involved in the History Department. Though this session didn’t really bring any new information to them, Davidson said.

“I could tell there people who weren’t around this kind of information before,” Davidson said.

After the presentation, Johnson said his main focus was to educate, and show people how we got to where we are. He said he hoped to make people feel not so jaded towards the system.

Johnson said he believes Watson’s story is the most important thing for him.

“Helps make people feel like they have a responsibility to right wrongs,” Johnson said. Additionally, Johnson’s words to people who don’t vote is, “Don’t complain then.”

The next Occupy Valk session will be Sept. 24th, titled “Show Me the Money (or not): The New Slave System of College Sports,” at 7 p.m. in Room 118 of the Valk Center.