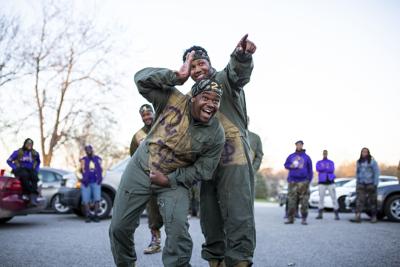 Family and friends awaited the arrival of the new members of the Iota Theta Chapter of Omega Psi Phi Fraternity Inc. April 12 at Wabash Park.

The Iota Theta Chapter is a chapter composed of three schools including Northwest, Missouri Western and Truman State University.

This is the second Neophyte Presentation for the Iota Theta Chapter since being reactivated. The chapter was dormant for nearly 20 years before making a comeback spring 2017.

The Neophytes wore jumpsuits with their fraternity letters painted on the front and their number on the back. They arrived, along with their Prophytes, at Wabash Park on top of a tan Ford Explorer.

“You have to stand tall to be a Que Dog,” the Neophytes chanted during the presentation.

Iota Theta Chapter of Omega Psi Phi Fraternity Inc. President and Missouri Western alumnus Donovan Gilliam is known as the dean of the new members. Donovan Gilliam said it was a struggle getting to where they are now, but he was impressed with how everything unfolded.

“This is actually microscopic to the actual things that we could do, but for what we came up with, I’m very proud,” Donovan Gilliam said. “I’m going to love my fraternity to the day I die. I’m proud of these boys; they worked hard.”

Dominic Gilliam, the younger brother of Donovan Gilliam, said it’s surreal that his brother is his dean.

Donovan Gilliam said he is thankful for everyone who came to the presentation and showed support.

“I love my black community, overall I love people in general,” Donovan Gilliam said. “I love everybody that came out here and support because we need more support out here with the black communities and organizations. Black power.”

Venerable’s father is a member of Omega Psi Phi Fraternity Inc., making Venerable a legacy. He said his father has taught him about the fraternity his entire life.

“I feel that my father has been grooming me to be a Que my whole life, and it basically helped with many battles I’ve faced in my life,” Venerable said. “Getting closer and closer every day to being welcomed into the fraternity, I definitely found more reason to why I wanted to be an Omega man.”

Venerable said there should be other reasons why someone wants to be in a sorority or fraternity not just because they’re a legacy if they are one.

“Being a legacy is not the only thing you should take to heart when becoming a Que or any fraternity,” Venerable said. “It’s really finding something in yourself that really makes you want to do it and what is going to be better about yourself.”

Venerable said being presented was one of the greatest feelings he has experienced.

“Performing in front of everybody (and) doing something that I will love to do, in the future, it really was just relieving,” Venerable said. “Having my parents there, it was probably really emotional for me. I might have not shown it, but I definitely felt it.”

“The Iota Theta Chapter of Omega Psi Phi Fraternity Inc. I feel like it’s great to be able to see that they have growing numbers,” Freelon said. “I just hope they can continue with their presence on this campus and continue growing.”

“It was something I’ve been excited about all semester because I knew it was coming to see that they were finally revealed,” Brown said. “It brought a lot of pride and joy to see that the numbers in our chapters were growing.”

Brown said they had a variety of people come to the presentation, and it wasn’t what he anticipated.

“The turnout of the presentation was more than I expected because we’ve had fraternity brothers from all over the state and Iowa come out,” Brown said. “We’ve also had different sororities from all over come to watch our boys presentation that definitely made everything worthwhile.”