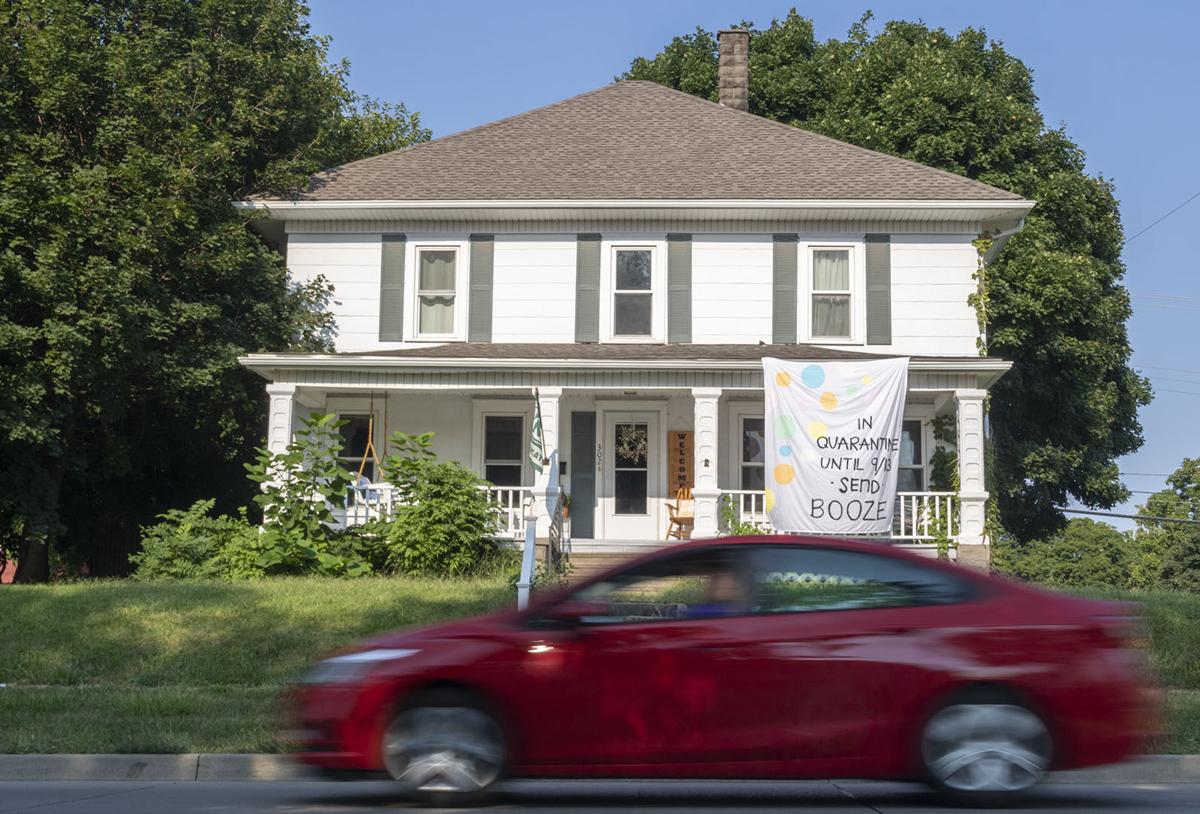 Residents in a house on Main Street fly a sheet that reads, "IN QUARANTINE UNTIL 9/13. SEND BOOZE." There are more than 50 active cases of COVID-19 involving Northwest students and staff, leaving an unknown number of students quarantined for 14 to 21 days.

On Aug. 15, Northwest students arrived at Powerhouse Bar and Dance Club, looking to reclaim their college lifestyle. Their masks varied, some wearing homemade coverings while others pulled shirts up around their mouths. Many were willing to risk contracting COVID-19, pointing out the high survival rate for young adults. Some said they’d already tested positive for coronavirus at home.

Powerhouse is perhaps the most popular spot in town for Bearcats. Owner Aaron Jones won’t admit it, but the students will. Jones closed his doors for four months, longer than most Maryville bars. He used this dual perspective on COVID-19 as a business owner and as the husband of a medical worker to open quickly and safely. The United States has recorded more than 5.6 million cases with 175,243 deaths.

“I understand both sides on COVID, but the ordinance is hard,” Jones said. He shrugged and leaned against the wall of the club. “If someone says they have a breathing issue, I can’t ask what it is because if I do I’m violating HIPAA.”

As Jones spoke, a group of five or six college students walked in the front door. One man gave a quick nod as he walked by.

“You just get back from the lake?” Jones asked.

“Yeah, moved back in tonight,” the man replied. Jones smiled as the group stepped inside the cramped entry.

“Everyone wears a mask, but they just came back from Lake of the Ozarks, which has been crowded all summer,” Jones said as he rubbed his head.

Missouri is ranked 25th in deaths with 75,075 confirmed cases.

Less than a mile away at Title Town Bar & Grill, a handwritten sign hangs in the window reading, “Corona free zone. No corona allowed.” It replaced the first sign hung less than a month ago by Title Town owner Tim Jackson, one that brought regional media attention to Maryville as the city council weighed whether to pass a mask ordinance last month. “No masks allowed,” the original sign read.

Royce and Misty Clement own Shooters, previously named Molly’s. The bar brought in a crowd of students most Saturday nights. Crowds are smaller following the recent ordinance and increased cases.

“They’ll have however many cases they want to have,” Royce Clement said through a white Yosemite Sam mustache. Neither him nor his wife wore a mask. As Royce Clement spoke, Misty Clement repeatedly looked at the empty dance floor and back at the door to Shooter’s, expecting to see the Friday night crowd pour in as the work day was ending.

“We need those college kids in here. But if they come in here and get sick, I don't know what will happen,” she said. “I don’t want the schools to close, but they probably will.”

On campus, students are also worried about being sent home a second time. Students see wearing masks as worth it to receive the on-campus experience. Northwest administrators are planning for students to remain on campus until Thanksgiving break.

“If we get sent home, I better get my money back,” freshman Kobe Clayborne said. The other nine boys at the table nodded in agreement. The group spilled over in a small booth in the Union. Northwest has already announced students will be charged normal tuition rates despite more than 50% of classes taking place in online or hybrid settings. Clayborne and a few of his friends were supposed to play football for Northwest this fall and are disappointed to see their season suspended.

“We can’t even practice. I hope we can do that sometime this year, but if people don't start following the rules, it’ll never happen,” Clayborne said.

He and some of the other players said they’d attended off-campus parties. At least three off campus gatherings occurred on North Mulberry Street on Saturday, Aug. 15, and 78 attendees were later tested for COVID-19 at Northwest’s Wellness Center after being exposed to the virus. Cars filled the street as young adults funneled in and out of houses, but less than a week later, many of them were quarantined as Northwest President John Jasinski sent an email warning students about the rising number of cases on campus and in the county.

“I mean they put hand sanitizer on me, but no one was wearing a mask,” Clayborne said, reflecting on the Saturday parties that left scores of students quarantined by Aug. 21, just three days after Northwest started classes. “Everyone was touching the drinks and sitting close together, so it wasn’t distant.”

Students looking to get involved in organizations on and off campus will have to adapt to new rules with peers.

Kayla Holmes is a Northwest junior and the social media manager at Sigma Kappa. The chapter had meetings throughout the summer to discuss the fall semester.

“No one really knows what the plan is. Recruitment is still happening but with a lot of changes,” Holmes said. Recruitment has moved online this year with the hopes of lessening crowds.

“The social aspect of the sorority should change to be safer as well,” Holmes said.

Holmes is also a member of the Bearcat Steppers dance team.

“I want to be able to have fun, but also I want to protect my teammates,” Holmes said. She agrees that all events should take place on campus, in hopes more attendees will take the necessary precautions.

“The unknown makes me nervous. You can’t control anyone but yourself, so you do your best and hope for the best,” Holmes said.

Residence halls have protocol in place to protect students living on campus.

Junior Kailee Allen moved into her room on Aug. 13. Allen noticed students not wearing masks while visiting rooms besides their own. Northwest advises roommates to establish their own mitigation rules for their room.

“With dorms at full capacity, it feels like there’s no stopping it,” Allen said.

“You don’t know how seriously other people will take it, and that’s scary,” Danforth said.

According to the CDC, for every 100,000 people in Nodaway county, there are 1,181 cases. With the addition of 7,000 students to the area, that means cases could increase to 343 within the first few weeks of class. As of Aug 24, Nodaway County had 125 active cases, with at least 52 of them involving Northwest students and staff. Tom Patterson, administrator of Nodaway County Health Department, knew that cases would increase.

Patterson is impressed with Northwest’s procedures for the semester with classes adapting to new environments.

“Students are stressed. Everyone is stressed, but taking it head on is better in the long run,” he said. “If classes are going hybrid, I think that’s going to help regulate distancing.”

Patterson is aware some students are not fully complying with guidelines, but he feels optimistic that students will do what it takes to stay on campus.

Patterson encourages students to continue to distance, wear masks, wash their hands and stay home if they're sick. As for those who don’t comply, Patterson tries to focus on the positive.

“We work on the 90% who do follow guidelines. Everyone else isn’t gonna like it, but if we get most people to do well with this and respect each other, we’ll do well,” Patterson said.

But two days into classes at Northwest, things had largely gone awry, and cases have continued to spike. Patterson expressed admiration of student-aged residents and optimism for how the fall semester might go before classes started, but now just days later, Northwest’s grip on the virus started to slip before students had completed a full week of classes.

In an email to students, Jasinski encouraged students to follow guidelines and attend University-regulated events following the first weekend on campus.

“The time is now, Bearcats. As we head into another weekend, we need you to take seriously not only your health and safety but that of those around you,” Jasinski said in the message.

The email ended with a list of on-campus activities and an ominous warning to Bearcats, less than a week into in-person classes.

“Without adhering to these basic mitigation measures, Northwest will soon be sending our students home as the University of North Carolina, Michigan State University and Notre Dame did this week." Jasinski said. "Don’t let that happen to us."