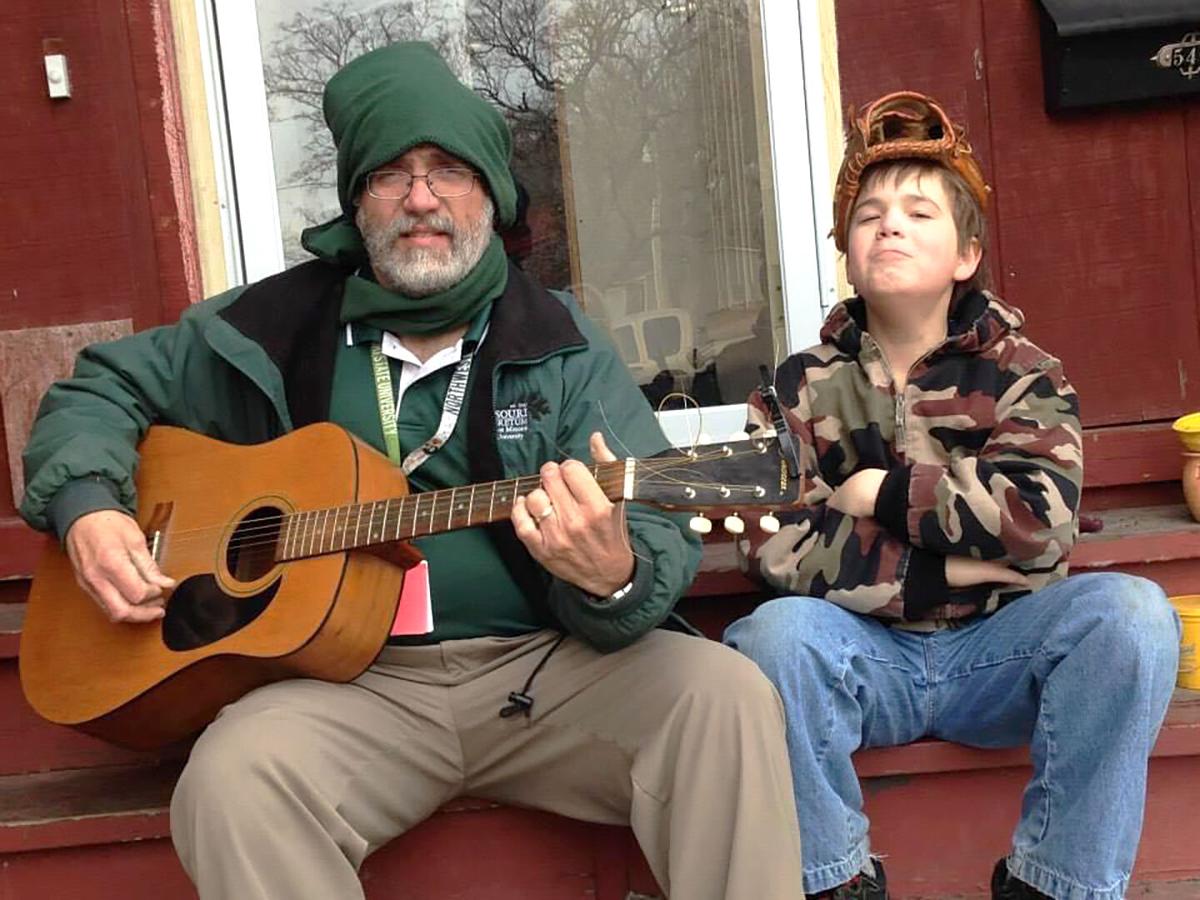 John Mark Viau, 51, (left) plays guitar with his son Warner (right) in a submitted photo from the family. Viau died in his home April 12. 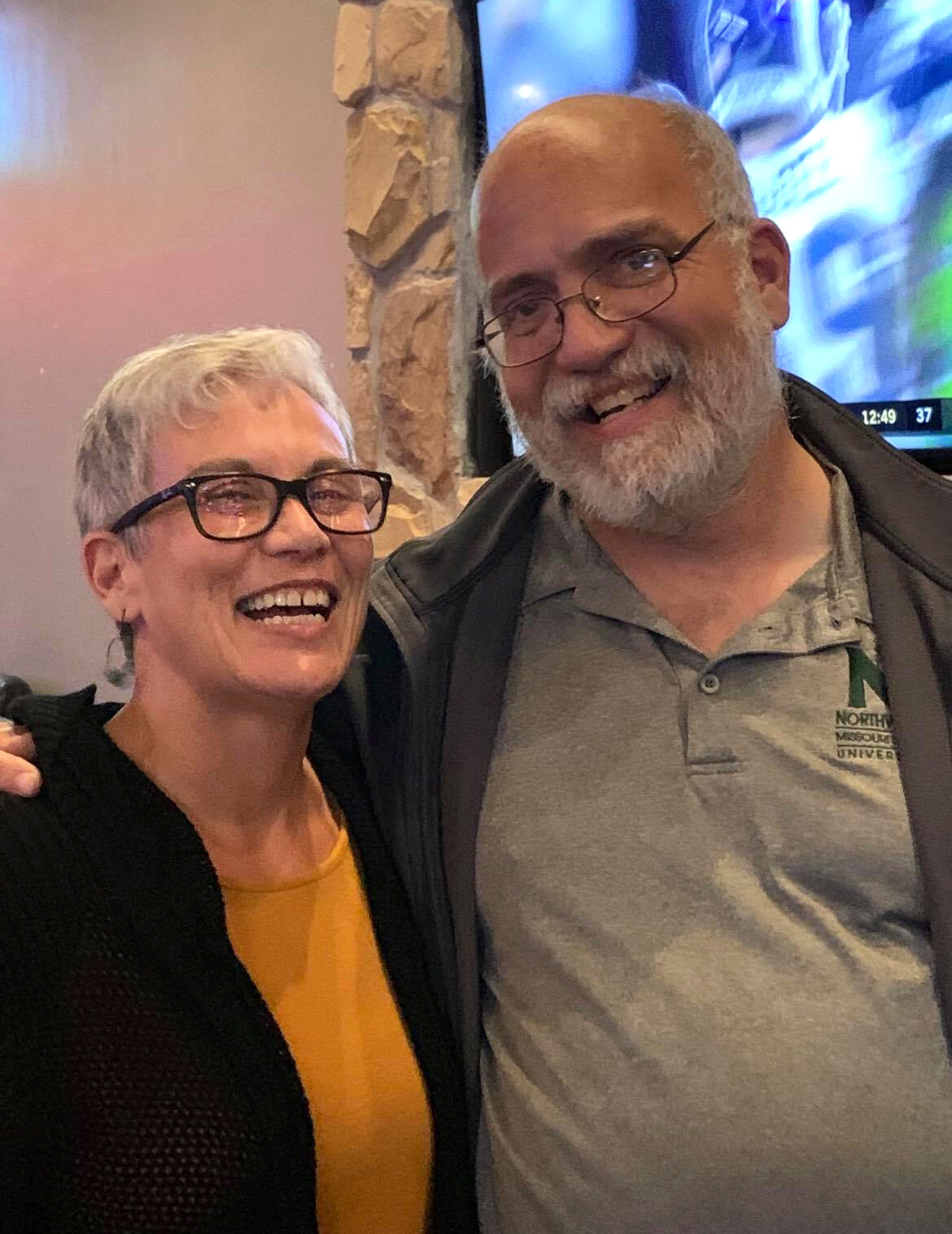 John Mark Viau, 51, (left) plays guitar with his son Warner (right) in a submitted photo from the family. Viau died in his home April 12.

His comforting smile could ease the worries of a stranger, but he knew no strangers. His kind, yet sturdy presence challenged people to do better each day — a true personification of Pumbaa from “The Lion King.” After all, he was Mr. Hakuna Matata.

John Mark Viau, 51, of Maryville, Missouri, died in his home April 12. His family, friends and colleagues remember him as a kindhearted man always looking to help others. He worked harder than any of his friends knew and frequently challenged his peers to reach higher.

“If everybody worked as hard as John, this world would be a different place,” said Mark Hetzler, a friend and colleague of John Viau.

After surviving a stroke and other ailments in the past few years, John Viau died Monday with family at his side.

At Northwest, he was a passionate advocate for recycling and sustainability efforts. He began work at the University in 2000 as a painter and maintenance staffer, then became a carpenter supervisor. Since 2011, he had served as the sustainability coordinator.

His wife Rose Viau, vice president of student affairs: residential and auxiliary services, said he had an extensive knowledge and deep love for Northwest and that he always looked for ways to make others’ lives easier.

“There were many days I don’t think he did anything that was his job,” Rose Viau said. “He was just helping somebody else with something they needed.”

Deb Redmond, custodial supervisor at Northwest, worked closely with John Viau and has an office two doors down from where he worked. She said he always asked about her day, and if she was having a bad one, he made an effort to help.

Bob Shultz, Russ Been, Sonya Hooper and Stephanie Wood, all fellow RA’s from Southwest Missouri State, recounted doing the job in stressful times. Amid the chaos, they described John Viau as the cool, “Fonzie'' person who radiated confidence but was always there in a pinch. Though he never got an acting role on “Happy Days,” John Viau was their person. They could rely on him for anything.

“He reassured me that people see stuff in you that you don’t see in yourself,” Shultz said.

“For me, describing him is like — a wiseness … he just kind of knew a little bit about everything,” Hooper said.

On the flip side of this wisdom came the fun side of John Viau. Hooper said she remembers his ability to have a positive outlook, especially when no one else could.

“In some instances he was helping you be better; in other instances, he was just getting a kick out of you,” Hooper said in a chuckle forced through tears. “It was this ‘I’m gonna mess with you now’ thing and it would take a while to realize what was going on.”

This trait held true during his time at Northwest, Redmond said.

In the Maryville community, John Viau helped with various service projects. In an email to all faculty and staff, Northwest President John Jaskinsi said John Viau played key roles in Earth Day events each spring and advised Bearcats Go Green, an organization for students interested in recycling and sustainability.

John Viau also worked with Lynette Harbin, Big Brothers Big Sisters of Nodaway County’s executive director, on the Big Green Moveout campaign that the organization has done for the last eight years. The campaign is a way for students to donate items or food when they move out in May rather than throwing it away.

Harbin reflected on John Viau’s time with BBBS of Nodaway County. She passionately explained how John Viau put his all into the campaign.

“He was just phenomenal to work with,” Harbin said. “He was one of those where even though the event probably benefited us more than anybody else, he just took control and made sure it was a successful event.”

She said John Viau was passionate about reducing Northwest students’ environmental footprint. He was able to do just this with the Big Green Moveout campaign.

Harbin said John Viau came up with the idea to set out collection boxes for students to put clothes, unused items and food in. He even handled the transportation of items from the University to BBBS to resell or other organizations such as Habitat for Humanity to collect.

Harbin said BBBS will continue with their campaign this year in hopes to keep the tradition going to John Viau’s standards. She is working with Tina Frueh, facility services director for the University.

John Viau was a member of St. Gregory’s Catholic Church in Maryville and was a Boy Scout leader for many years. He had strong mechanical abilities and was always willing to help people with their car issues.

Even in the hours leading up to his death, people remembered John Viau to be fully devoted to helping others; He would want friends, family and the strangers who weren’t strangers to live worry free, for the rest of their days.

He was preceded in death by his parents and his sister, Heidi Marie James. He is survived by his wife, Rose Viau; his two sons, Warner Viau and Sadler James Viau; his daughter, Clara Viau; his sister, Erika Pracht, of North Augusta, South Carolina; and several nieces, nephews and friends.

In lieu of flowers, memorials can be directed to John Viau’s family to establish an educational fund for his children. Donations can be sent to the Bram Funeral Home, 206 E. South Hills Drive, Maryville, MO, or through a GoFundMe account.