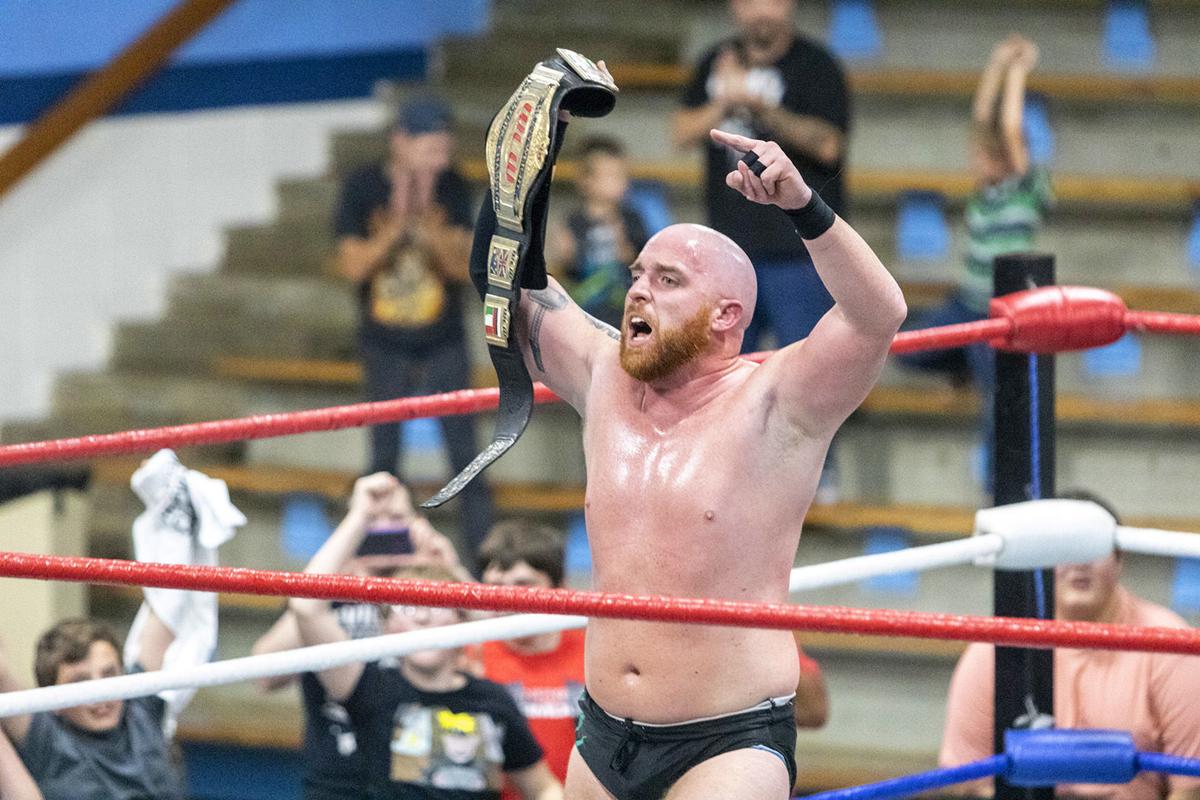 Leland Race, son of Harley Race, holds the World League Wresting heavyweight championship belt after competing at a WLW event Oct. 19 in Burlington Junction, Missouri in honor of his wrestling-legend father who died in August. 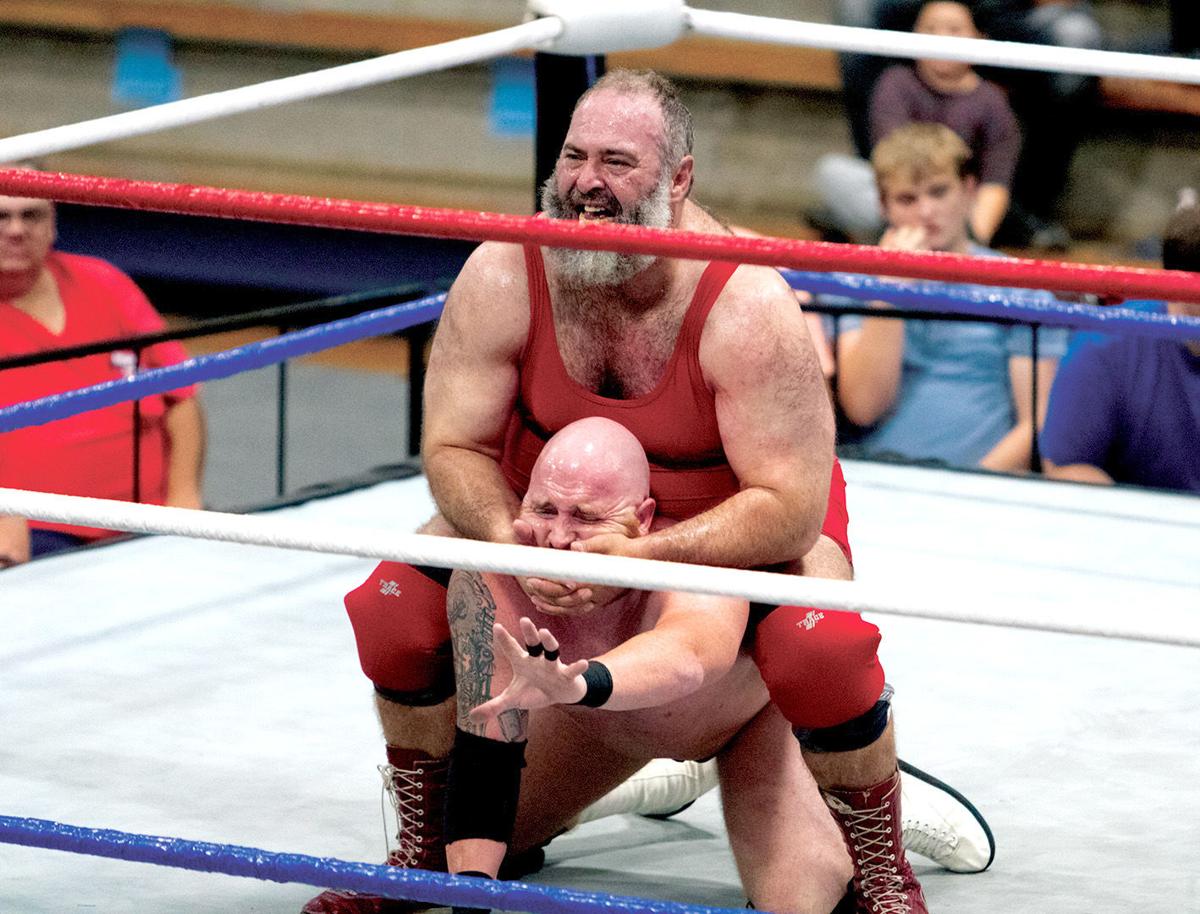 Derick Stone and Leland Race compete in the most anticipated wresting match of the night where Race was ultimately victorious and named the new WLW heavyweight champion.

Leland Race, son of Harley Race, holds the World League Wresting heavyweight championship belt after competing at a WLW event Oct. 19 in Burlington Junction, Missouri in honor of his wrestling-legend father who died in August.

Derick Stone and Leland Race compete in the most anticipated wresting match of the night where Race was ultimately victorious and named the new WLW heavyweight champion.

BURLINGTON JUNCTION, Mo. — Two months after the death of a Nodaway County wrestling legend, the northwest Missouri community gathered for a memorial event featuring a combination of athletics and performance art entertainment, where wrestlers competed in fist-throwing, body-slamming matches that left spectators on the edge of their seats.

Harley Race, known as “The King” of the ring in professional wrestling, died at age 76 from lung cancer Aug. 1.

The event, which 190 Nodaway County citizens attended, took place 5 miles away from Harley Race’s hometown of Quitman, Missouri, and raised close to $3,000 for WLW and about $300 for the West Nodaway Band Boosters.

The memorial event began with Leland Race saying a few words about his father, whose name stands alongside other greats in the record books of professional wrestling.

“Tonight is not about me,” Leland Race said. “It’s only meant for one person and one person only.”

Harley Race became a World Wrestling Entertainment Hall of Famer in 2004, inducted alongside Greg “The Hammer” Valentine, Jesse “The Body” Ventura, Don Muraco and seven other wrestling legends that year.

WWE wrestler Trevor Murdoch attended the event in support of his late friend Harley Race. He said they knew each other from the small world of professional wrestling.

“Race wasn’t just a wrestler,” Murdoch said. “He was a guy, a man first, with a son who is becoming his legacy.”

Leland Race took on wrestling at the age of 17, at first to his father’s dismay, because Harley Race wanted his son to live a different life than he had. With the persistence of his son, Harley Race eventually accepted that Leland Race wished to follow in his footsteps.

Leland Race notes his most memorable match in his career as March 9 when he challenged the NWA World Heavyweight Champion Nick Aldis for the title.

“To have my dad there, ringside for that event, and me challenging for a title that he had won eight separate times … that’s single-handedly the coolest thing for me,” Leland Race said.

Five matches led up to the main event in Burlington Junction, where Leland Race wrestled against Derick Stone for the WLW heavyweight championship in his father's memory.

Rock and heavy metal boomed from the loudspeakers in the high school gymnasium as Leland “The Legacy” Race entered the ring sporting tights and a white, green and black leather jacket made just for the main event on the breezy October night.

The champion, Derick Stone, entered the ring in a tight red leotard that the crowd found humorous due to his old age.

After introductions, noting Leland Race as a St. Louis, Missouri, native weighing 224 pounds and Stone an Egypt native weighing 291 pounds, the bell sounded and the two began a match wrestling fans would not soon forget.

Neither competitor had an obvious advantage throughout the first 20 minutes in the 25-minute match. The anxious crowd began to chant “Leland” over and over, the match drawing near its time limit in hopes of a serene grasp of victory for The Legacy. Soon after the chant, the match came to a quick end when Leland Race defeated Stone by pinfall.

A memorable ending to a hard-hitting night, Leland Race’s name shot through spectator’s ears as the announcer congratulated the new WLW heavyweight champion.

Sophomore Christian Dixon attended the event and ended up winning a raffle the WLW held for an authentic WWE title belt. He said it was the first time he attended a live wrestling event.

“Everyone is usually so quick to point out that this type of wrestling is fake or scripted,” Dixon said. “It still takes an extreme amount of talent and skill to do this. It’s an art form really, like theater, which shows it can be about so much more than what people see at face value.”

Junior Daniel Linden, a Northwest student from Scotland, has been a professional wrestling fan for as long as he can remember.

“I grew up watching Leland’s dad, Harley,” Linden said. “I didn’t know what to expect when I came tonight but what I got was a really entertaining show that meant something.”

WLW came to Burlington Junction for a similar event 18 years ago for a less somber cause than the death of a beloved wrestler. The announcer, Ben Simon, said the organization hopes to come back.

“WLW hopes to come back to Burlington Junction a little sooner than 18 years from now,” Simon said.

Leland Race said the night was an indescribable memory and one of his greatest nights in the ring.

“I may be from St. Louis, but tonight, everyone is from Burlington Junction,” Leland Race said. “I've said it from the inception of this idea. To be able to do this in the area he grew up is special.”