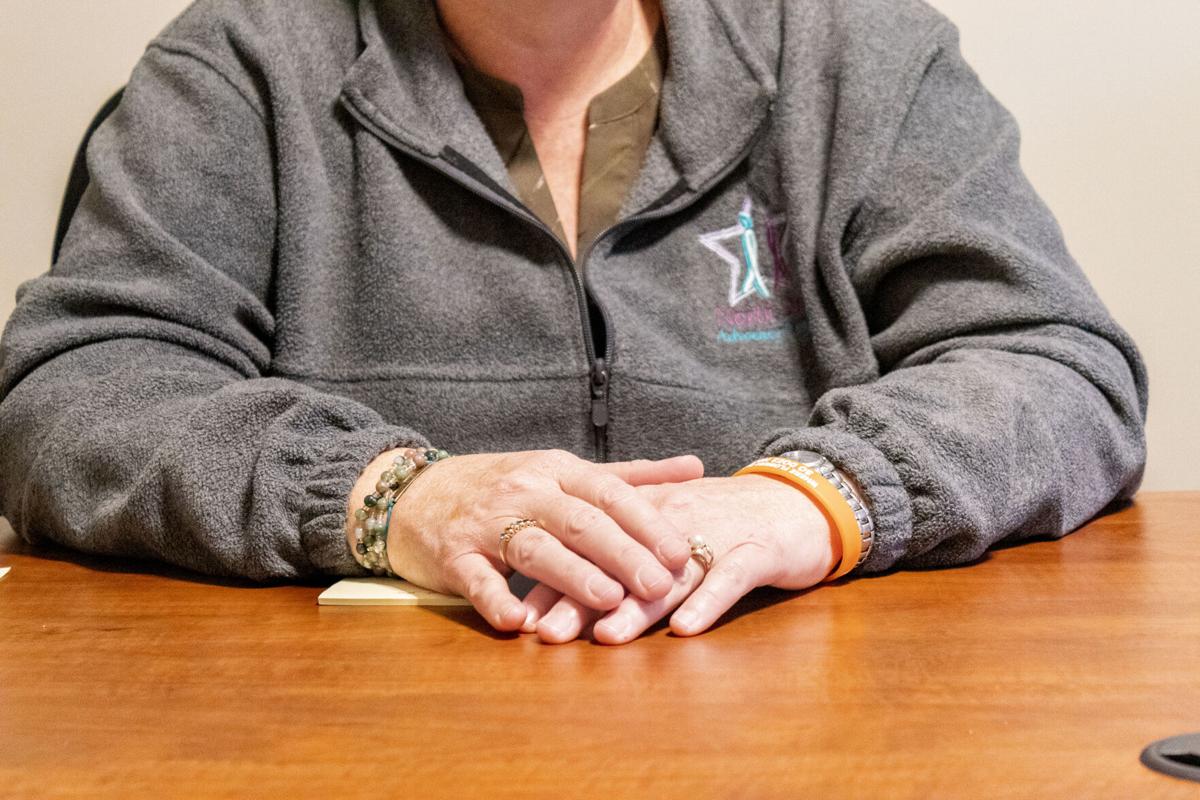 What motivates Linda Mattson in her everyday life are represented on each of her wrists. On her left wrist is an orange silicone wristband that reads “Karen’s Krew.” On her right hung a rosary next to a dainty, blue bracelet with a small metal plate that read “Badass.” 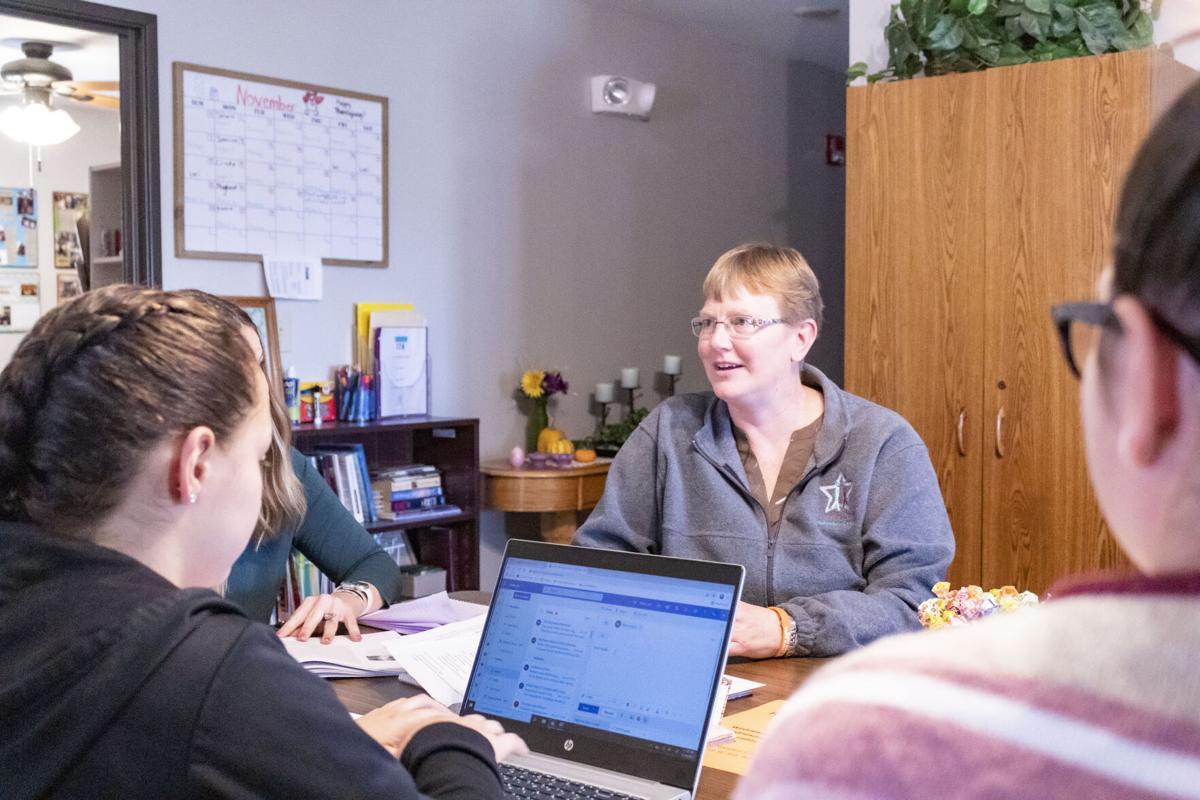 Linda Mattson sits down for a conversation about the day's work with interns Emily Nine, Sprite’a Beard and Jasmyn French. The interns work with clients alongside Mattson and her co-workers at North Star Advocacy Center. 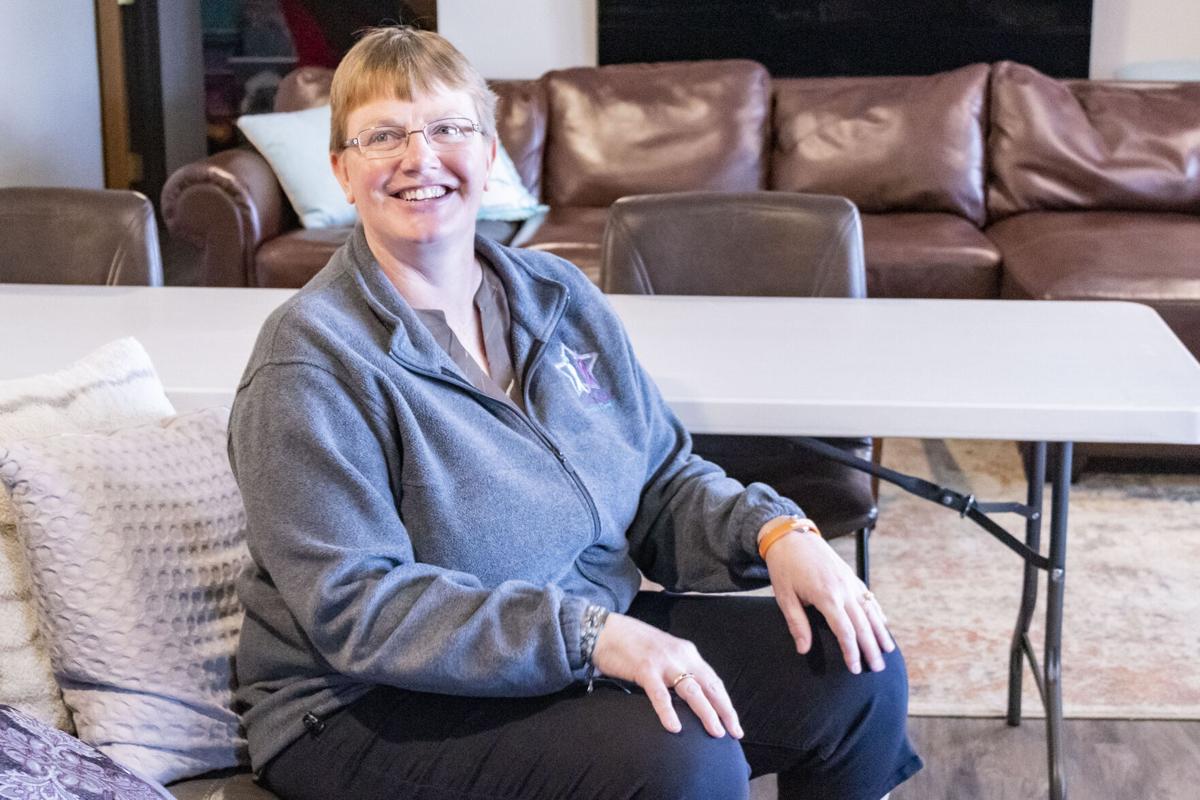 North Star Advocacy Center Director Linda Mattson has an uplifting conversation with her co-workers. Mattson is complimented by her co-workers on her humor and being able to lift the mood of others around her.

What motivates Linda Mattson in her everyday life are represented on each of her wrists. On her left wrist is an orange silicone wristband that reads “Karen’s Krew.” On her right hung a rosary next to a dainty, blue bracelet with a small metal plate that read “Badass.”

Linda Mattson sits down for a conversation about the day's work with interns Emily Nine, Sprite’a Beard and Jasmyn French. The interns work with clients alongside Mattson and her co-workers at North Star Advocacy Center.

North Star Advocacy Center Director Linda Mattson has an uplifting conversation with her co-workers. Mattson is complimented by her co-workers on her humor and being able to lift the mood of others around her.

Linda Mattson crossed her hands and rested her elbows on her desk. On her left wrist sat a watch and an orange silicone wristband that read “Karen’s Krew.” On her right hung a rosary under a dainty blue bracelet with a small metal plate that read “Badass.”

What motivates Mattson in her everyday life are represented on each of her wrists: family, faith and strength.

The orange bracelet was made for her sister, Karen, who was diagnosed with acute myeloid leukemia during the beginning of the pandemic in May 2020.

“We just wear these in support of her, in honor of her and to just bring her strength on her fight,” Mattson said. “There's been a lot that's been tough. We couldn't be with her; I haven't hugged her since then.”

Mattson was one of the few family members who could spend time with her sister during the pandemic.

“I was able to take off for a few days, but I had to kind of quarantine before that or people had to leave me alone here,” Mattson said. “You talk about family, I mean, they were careful in the pandemic because of me and my sister, you know, and that's what family does.”

Her sister is now in remission, but the love and support for her family flows further to her husband, five children and seven grandchildren. Mattson said they are the driving factors in her everyday life and support her to make decisions outside of her comfort zone.

Mattson got married right out of high school to her husband, Francis, and moved to Chillicothe, Missouri, to raise her family. During her time in Chillicothe, she worked as a preschool teacher. There she found her passion for teaching.

After 12 years, Mattson found her way back to Maryville and pursued a degree in elementary education as a nontraditional student.

“I packed up my kids, and I moved them to Maryville while my husband was still in Chillicothe. And I went to college,” she said.

In addition to being a student and a mother, Mattson also decided to be a part of the Northwest women’s basketball team, playing for three years until she did student teaching.

“To juggle the kids, basketball and classes, it was tough. I have good family support here; I couldn't have done without my family,” Mattson said. “They helped out with the kids, especially when we'd go on basketball trips and things like that. I didn't sleep very much.”

After obtaining her bachelor’s, master’s and specialist degrees from Northwest, Mattson taught in the area for five years and was a principal for nine.

After 14 years in education, Mattson decided to quit her job as a principal in the Northeast Nodaway School District.

“Honestly, just after being a principal for so long, one day I just decided that I needed to focus on my family a little more. It was kind of consuming all of my time in my life,” Mattson said.

Without an idea on where to go next, she happened to be browsing the newspaper and saw an advertisement for what would soon be her next job as director of the Children and Family Center.

Getting the job as director of the Children and Family Center, now known as the North Star Advocacy Center, felt like fate, Mattson said. She's been in the position for half a decade

“I really think it was kind of a God thing. I mean, it really was. I just felt like it was right,” Mattson said. “My husband agreed with me; he kind of felt the same way. It's kind of a leap of faith.”

In her new role Mattson found herself working with victims of domestic violence and sexual assault and running the advocacy center like a second household.

Since starting with a clean slate and no background on her new position, Mattson has learned a lot about herself and the clients she has worked with.

“I think I was one of those people that thought, ‘Oh, you maybe shouldn't put yourself in that situation.’ And, you know, I'm not really proud to admit that, but it's the truth,” Mattson said. “I was very ignorant. I've just learned so much about victim blaming and about why people stay in abusive relationships. So there has been a lot of growth.”

An unexpected obstacle Mattson had to overcome was that she was forced to separate her work and home life. Due to the confidentiality of her position, she was no longer able to go home and talk about work or the people she’d met with during the day.

Because of this, she ended up having a relationship with her coworkers that felt like a second family.

“Most things I can't go home and tell my family. And so, you just bond over that at work because you're the only people you can talk to,” Mattson said. “We care about each other. We look out for each other. We all have our bad days.”

“I think that she's funny because you have to be funny,” Kosman said. “We don't say that lightly around here. You just have to have a sense of humor because otherwise, the work is going to make you cry.”

Kosman has worked at North Star Advocacy Center for 12 years and has worked with Mattson during her time there. Those years working together allowed Kosman to see Mattson's strength in leadership.

“She just brings good leadership. Like, she tries to be fair, she tries to listen, she tries to really look at it. Not just what's on the surface, but what's behind it, like deeper things,” Kosman said. “She's not afraid to do the hard stuff, either, and make the hard decisions, even if it's gonna be unpopular, which is a good leader.”

Mattson said she finds her strength in her coworkers and is inspired by them to continue the work that she does for others.

“They work directly with the clients, and it's tough. It's tough work,” she said. “They hear those traumatic things and take that in. And so they inspire me just by their strength in handling those things and their professionalism.”

Not only is Mattson inspired by her coworkers, she also finds inspiration through her faith and in Mother Teresa.

“She was just very giving and never expected anything in return, and was just a good person. And so I wish I could be like she is,” Mattson said. “She inspires me to keep giving and be selfless.”

She found that her faith led her to her current job as director of North Star Advocacy Center and she sees it in her everyday life through her actions. Mattson said her biggest goal in life is to make it to heaven and to help make other people’s lives better at her utmost ability.

“I do feel like if we listen, God does show us the way. So it definitely has guided my life. Going back to college, I couldn't have done it. It was a God thing. He got me through as much as the support of my family did. Like, I'm looking back thinking, ‘How did I manage all that?’ Well, because that's where I was supposed to be at that time. I do feel very strongly about that,” Mattson said.

Through family, faith and strength, Mattson has found where she was meant to be.