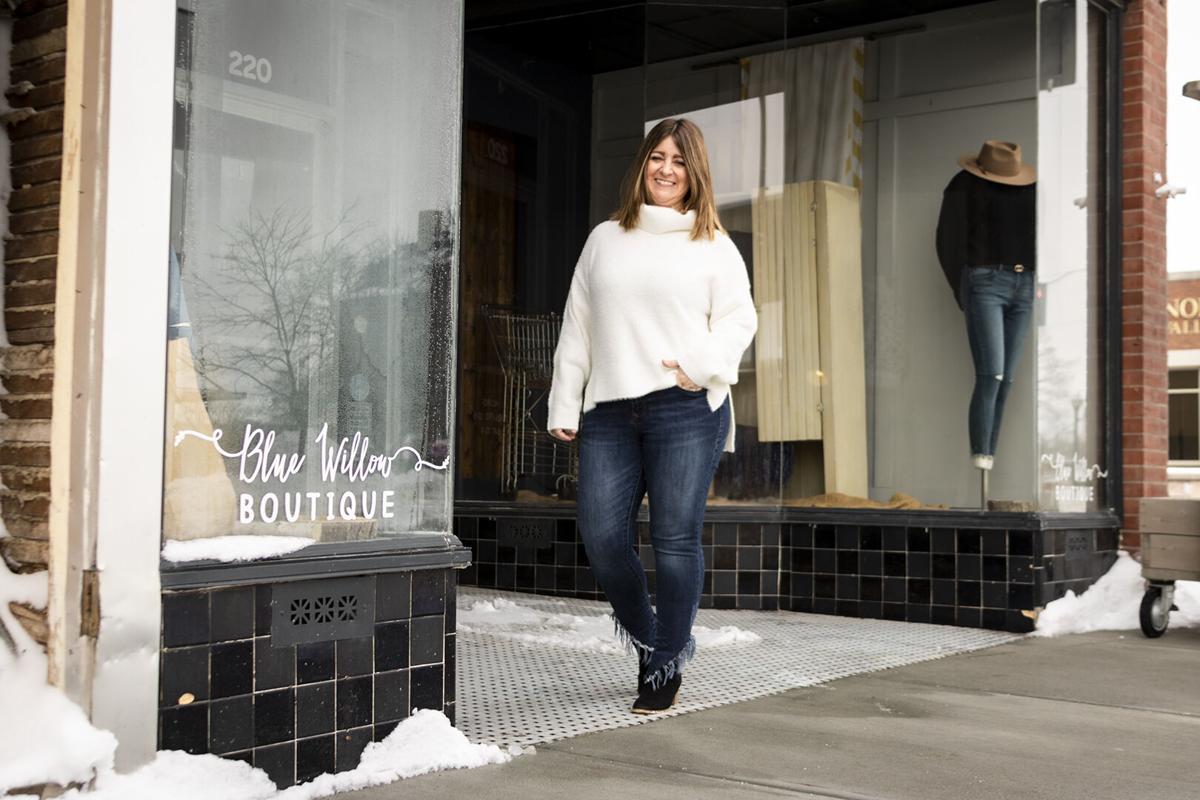 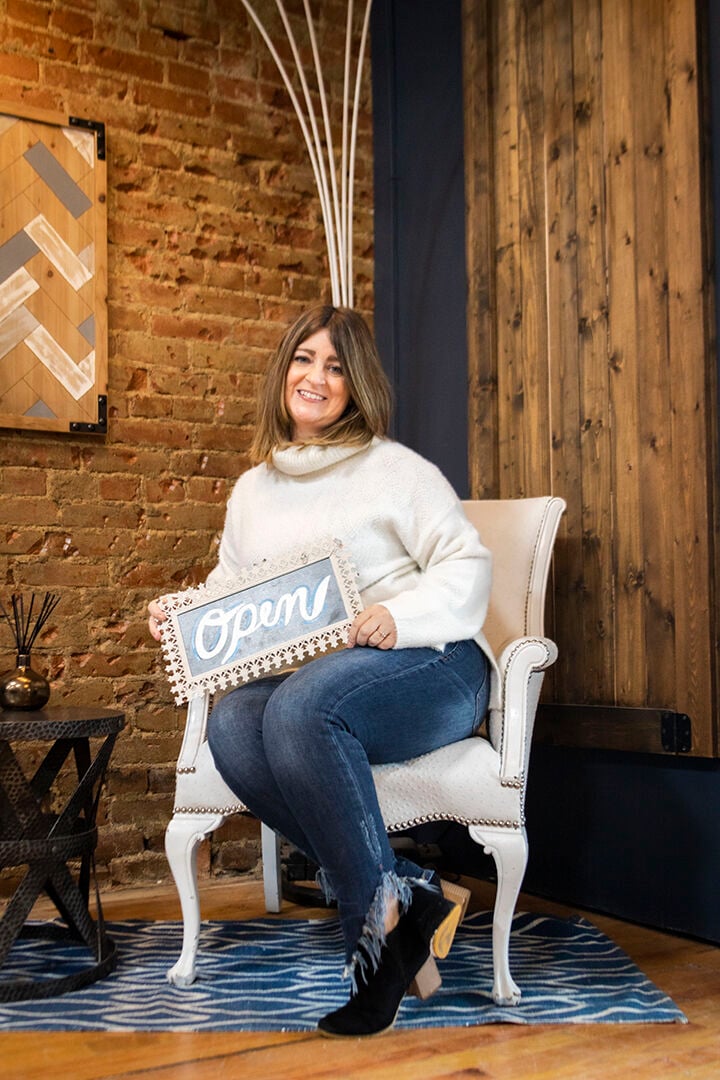 Owner Stephanie Campbell sits in her store, Blue Willow Boutique, on Main Street. The boutique first opened in 2017 as an attempt to bring life back to the streets of Maryville.

Owner Stephanie Campbell sits in her store, Blue Willow Boutique, on Main Street. The boutique first opened in 2017 as an attempt to bring life back to the streets of Maryville.

In the past four years, Maryville has seen various additions to its downtown. Blue Willow Boutique and White Elm Mercantile are two of these businesses, and a microbrewery will add to the collection within the year. Businesswoman Stephanie Campbell — owner of Blue Willow Boutique, White Elm Mercantile and part owner in Black Pony Brewing Company — has found ways to make these businesses successful, even during a pandemic.

For Campbell’s shops, she has placed more focus on the digital side of her businesses. With concerns of the pandemic, Campbell has had to adapt her business structure to fit with her customer’s needs.

“It’s just — it’s different,” Campbell described business during COVID-19. “What we are finding is that people are really motivated to support local.”

Campbell stressed the importance of the community coming together to support local businesses during these times, and how it has led to her opening new businesses in the face of a pandemic.

In Oct. 2020, Campbell opened the home store, White Elm Mercantile, as COVID-19 was increasing throughout the county.

When White Elm Mercantile first came about, the shop was strictly online. After seeing the success in online sales, Campbell decided to open her location in Maryville.

“We were pleasantly surprised with the response that we received from the community when we opened,” Campbell said.

When Campbell first came to Maryville, City Councilwoman Rachael Martin was one of many who welcomed her to the downtown district. Martin serves as the tourism board liasan for Maryville, and remembers her first encounter with Campbell prior to Blue Willow Boutique’s opening in early 2017.

“In the face of a pandemic, Stephanie has found ways to continue investing her time and resources into our downtown district,” Martin said. “She brings individuals to the table that can partner and work together.”

Campbell and her fiancé Kent Yount’s partnership with Brandon Jensen and Jenniffer Jensen has led to the birth of the new microbrewery set to open in spring 2021. The Black Pony Brewing Company will have food, beer and an atmosphere for people of all ages to come and hangout.

“Very exciting,” Martin expresses her interest in the upcoming microbrewery. “I think the concept and the partnership with the city are a blueprint for success and future investment in downtown.”

Additionally, there will be Airbnb rentals located above the Black Pony Brewery for those visiting the town.

“You’ll be able to come and stay in a really cool urban feeling loft,” Campbell said. “It’ll make you feel like you’re staying in downtown Kansas City or something like that.”

Campbell has hope that the pandemic will be slowing down by the time the Black Pony Brewery opens its doors to the public.

The Kansas City, Missouri, native moved to Maryville after meeting her fiancé who lived there with his two kids. Campbell remembers the first time that she drove through Maryville and wondered, “where is the stuff?”

“When I moved here four and a half years ago, I was really excited about, ya know, thinking of the vibrant downtown and how there would be cute little shops and restaurants and bookstores and coffee shops, and there were literally none of those at the time,” Campbell recalls.

After selling her home in Kansas City, Missouri Campbell decided that she wanted to open up a boutique in Maryville.

“Kansas City will always be my home, but this is my community and I love it here,” Campbell said.

When making a business decision, Campbell likes to ask herself what the community needs and would benefit from. Her first step to helping turn Maryville into what she had envisioned was her boutique.

Campbell remembers back in November 2016 when Blue Willow Boutique first opened its doors to customers. Originally, the store was about half clothes and half home and gifts. During opening weekend the boutique had sold out of all of the clothing.

A second location of Blue Willow Boutique opened in Oct. 2019 in Saint Joseph, Missouri. The boutique now ships to around 40 states nationally. Recently, Campbell has seen an increase in local online shipping. She has also adjusted the shipping cost because of COVID-19.

“We’ve had to adapt the way we do business just to make sure that we’re still meeting our customer’s needs,” Campbell said.

Savana Wiederholt, Blue Willow’s digital media specialist, has been running the boutique’s social media, creating graphics and working with their branding and marketing since September 2019. She remembered back to her first impression of Campbell.

“I could just tell that she’s like a very genuine person, she just listened really well,” Wiederholt said. “I could tell she was actually interested in getting to know me — a very hard worker.”

Wiederholt describes Stephanie as funny, down-to-earth and sees her as a second mom who genuinely wants the best for her workers.

Martin said Campbell brings more to Maryville than women’s apparel, home goods and a new microbrewery. She also provides experience and opportunities for students and cultivates relationships in the community.

“I could tell right away that Stephanie would be a success story in Maryville,” Martin said.

Martin described Campbell as determined, kind and creative noting that Campbell is hungry for success, always reaching for her next goal.

“You gotta remember that those small businesses are feeding families that you know, or that you work with that, or that you also meet,” Campbell reminded the community. “Whereas the big box stores they’re not necessarily doing that in the same way.”

Campbell has hope for the increase of in-store sales after COVID-19 begins to fade into the past.

Maryville is adding a couple more elements to its repertoire of small businesses, both for the average local shopper and beer enthusiasts alike.