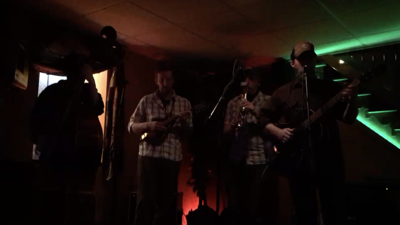 An Illinois based band plays at a local dive bar with instruments made out of broken down home appliances. The bass guitar is made out of a washtub. One man plays the washboard. Another, a eucalyptus bamboo digeridoo. The band’s name is the Woodbox Gang and the lead singer, the man who made all these instruments, is Northwest Missouri State University professor Alex Kirt.

Kirt has been fascinated with music for as long as he can remember. As a child, he would constantly get into his parents’ substantial vinyl collection, where he would listen to bands such as The Beach Boys, The Beetles, Led Zeplin, and Queen. On his sixth birthday, his parents bought him a guitar and he began taking lessons. At age 15, after moving from southern Illinois to Florida, he joined his first band called the Loaded Blanks in which he played the guitar. At age 15 he joined another band called Eternal Knights and yet another band during his senior year of high school called Sol Dogs.

Kirt played lead guitar in all of these bands but actually became the lead vocalist and was the lead singer from there on out when he was a part of the Sol Dogs. In one of their shows scheduled in a southern Illinois barn, Kirt’s cousin and lead singer never showed up for the gig. Kirt was the only other band member that could sing so he sang every song that night from the band. After the show, the crew decided that they liked Kirt’s voice better than Kirt’s cousin, so they kicked him out of the band and made Kirt the lead singer from there on out. Kirt has always been the lead singer in every band he’s been a part of from that night on.

Kirt went into college initially majoring in music. However, the school wasn’t providing the type of music that he was interested in so he quickly changed his major to photography. Although he switched majors, he was still known around the university for his singing talents. A local band asked him to be their vocalist in an album that he was recording, to which he said yes. He spent so much time in the studio and not in class that he ended up flunking out of college. Because of this, he moved to Boulder, Colorado, where he became an outdoor guide, but ended up on the Wildland Firefighting Crew. Since firefighting is only a seasonal job, after the summer had ended Kirt ended up moving back to Southern Illinois and started doing gigs to make money with yet another band. However, this is where Kirt’s musical career began to take flight.

The Woodbox Gang started out playing in small, local dive bars and coffee shops in 2000. When opportunities to play at local shows and concerts arose they always said yes. Pretty soon, Woodbox Gang was making a name for themselves and playing every weekend.

Because of their constant releases and growing audience, all members of Woodbox Gang we’re able to quit their day jobs so that they could travel more and do music full time. “It would be easier for me to name the states we haven’t played in than to name the one’s we have played in,” said Kirt. Those states include Maine, North Dakota, New Mexico, Hawaii, and Alaska. During the summer they would go on eight to nine week tours and only three week tours during the winter. However, the band finally came to an end when the lead band member was caught for fraud and went to jail in 2010. The Woodbox Gang has all of their work posted on Spotify.

At the same time that the band broke up, Kirt’s wife told him that she was pregnant. Not knowing what he wanted to do now that his musical career was over and not knowing how he was going to provide for his growing family, he went back to college to finish his degree. In order to support his wife and newborn while going to school from 2011-2015, Kirt played as many solo gigs as he could. “I pretty much didn’t sleep for four years,” joked Kirt. He was still able to graduate with striaght A’s and with a masters in fine arts.

Kirt started creating and hand crafting the dozens of instruments he owns today when he graduated college. It was a cheap way to create instruments that still sounded good. He said that he made a bass out of a washtub and altered a washboard so that it could be played musically. One of the instruments that he is most known for is something he calls, “the gatlinaphone. If you can’t tell, it’s a mix between a Gatling gun and a phonogram. He altered it to be able to play vinyl records. When he puts the record in, he cranks the shaft which spins the Gatling and then spins the record. He still uses this to perform at fine art conferences around the nation. “I’ll take samples of current news stories and put them into the record,” Kirt stated. He further explained that when the vinyl plays, it rapidly outputs all of the headlines he had previously programmed in. This is supposed to be a metaphor of how strongly the medio can push whatever social issues they want into the public’s life. “I’ll wear a gas mask and armor, and I’ll make my wife wear it too. It’s supposed to be a little scary and I always have to explain to security that this actually isn’t a real weapon,” Kirt explained.

Because of all the bands he was in and distributors he worked with, Kirt said he still gets trickles of money from his musical career today. You’ll be able to find him and the Woodbox Gang on Spotify.