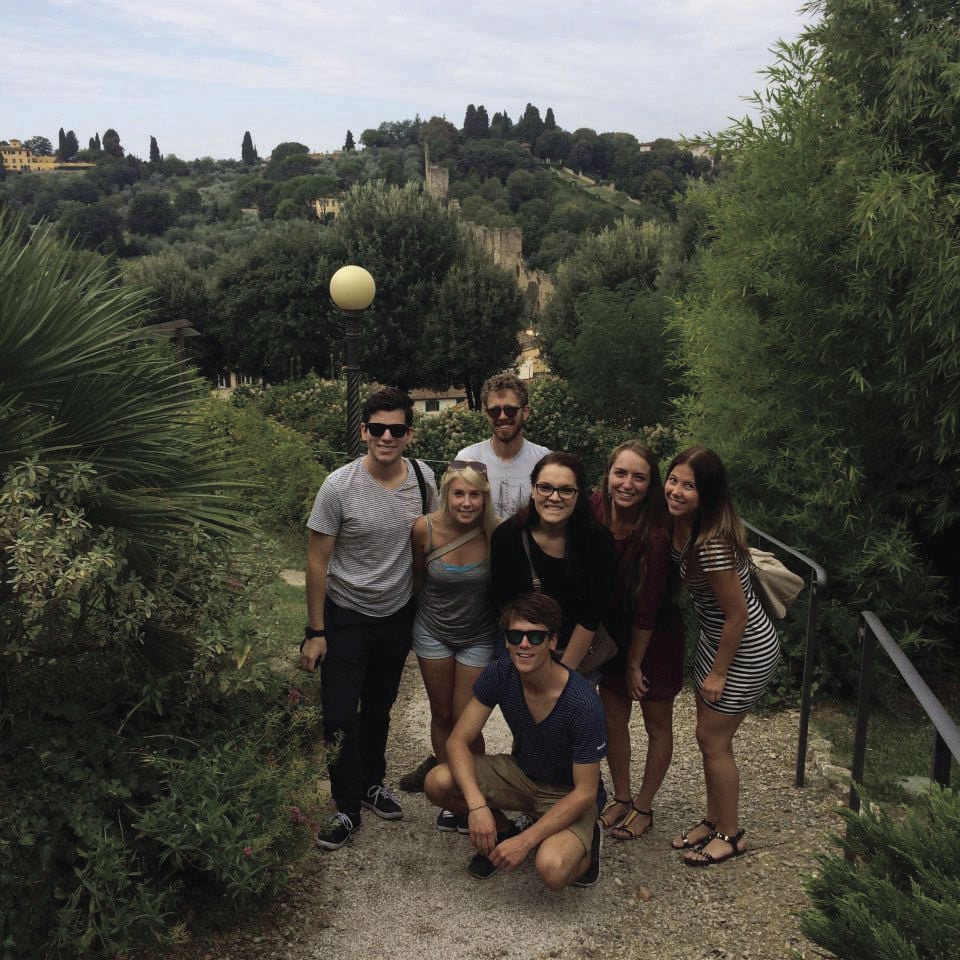 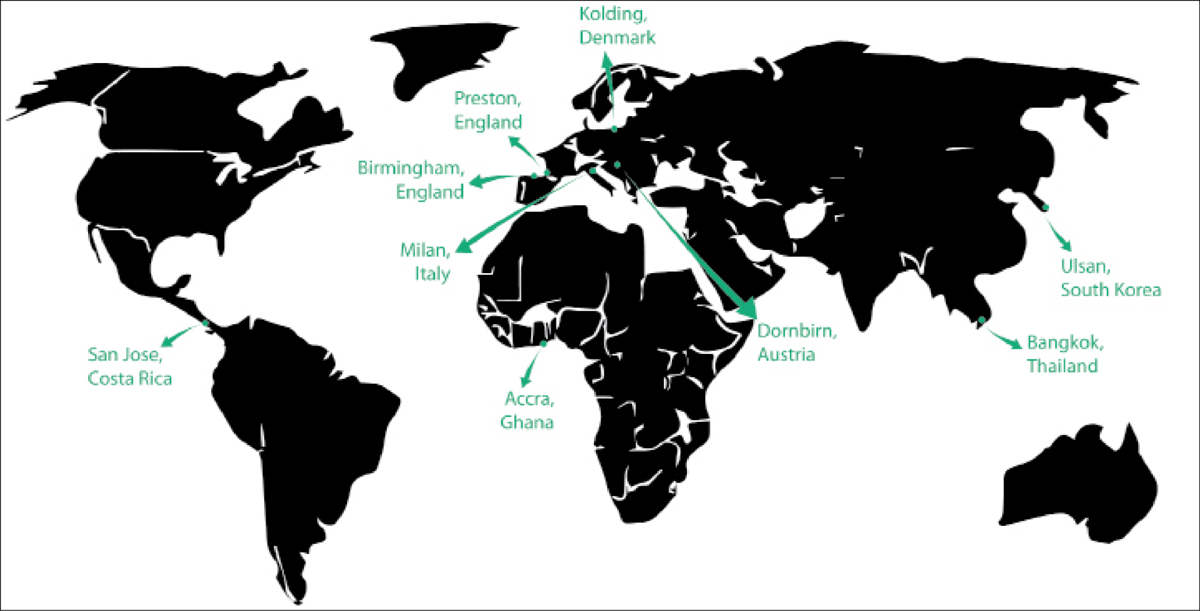 t’s 5:30am in Maryville, Missouri, and still dark outside. But in Austria, where Northwest Missouri State University student Angela Bode has been studying abroad this semester, it’s 12:30 in the afternoon, and class just got out a half hour ago.

“I had never been outside the US, and I didn’t know what to expect.  It was a bit hectic getting there,” she says, of the initial arrival to the country, getting off the plane and to the school. “The dorm wasn’t what I expected.”    It turned out to be smaller than she initially thought.   After they arrive, students then go through a week of orientation.

Bode, who is an Advertising major at Northwest, is studying HR Management and International Marketing while abroad.   She wants travel and the excitement that comes with it to always be a part of her life.

“It’s been a global experience. I have made friends from the Netherlands, from all over,” Bode says.  “All groups have international students, and you have to be able to adapt.”

So far, Bode has adapted to a different system of schooling.  Classes are shorter but much more intense.

“Schooling is different here,”  Bode explains. “You have class for a week – the whole semester is crammed into a week—and then you have a week off.”  It makes for an intense week, or two, of classes.  Sometimes, a student will have class a week at a time and then a week off, or two weeks of classes followed by two weeks off.

“Having class for a week allows me to travel,” she says. “I went to Italy for a week, and saw Rome, Venice, Vaduz and Cinque Terre.”  In addition to that, Bode has traveled to Lindau, Munich, and Lichtenstein (Germany), and will be getting ready to spend a week in Greece, touring the cities of Athens and Santorini.

“In Rome, we saw the Coliseum at night.  You remember what you’ve learned in history class, but being there at night—it was really cool,” she says. “The village, the ocean, everything I’ve experienced so far has been worth it.”  In fact, Bode went hiking for the first time in the Alps, the mountain range in that part of Europe.  She compares hiking for the first time to her study abroad experience:  a bit challenging at first,  but when you see the metaphorical views, it’s worth every step.

“We got to climb a huge mountain,” she says, of what was a new experience for her.   “Once we got to the top, the views were worth it….beautiful.”

“There is a whole different way of doing things here,” Bode says. “At restaurants, you don’t have to tip…” at that moment, a friend walks by.

“You can tip,” her friend says.  However, what she means is that pay is different – waitstaff aren’t depending on tips for their income, like they are here.

“It was difficult initially,” Puriel says. “I came from a big city to a small place. But the university had a similar setup, similar class times, so adjusting to that wasn’t too challenging.  I studied here for a year, then went home to finish my degree.”

Puriel also hosted an exchange student last year who was from China.  She had come to the US to do three weeks of English and cultural training.

“She did a lot of shopping,” Puriel says.

While language barriers can be intimidating at first, Puriel encourages students to be open to countries whose native language isn’t English.

“Students want to go to English-speaking countries,” she says. “But students usually don’t struggle terribly.  They find people who speak English where they are.  Students don’t come back due to lack of communication.”

Puriel says that places such as Scandinavia and Asia are excellent places to study, but some students don’t think of going to these places.

“Placement in some of these countries is easier and less expensive,” Puriel explains. “Classes are taught in English, and these countries receive a number of international students.”

Northwest students are studying in almost all corners of the world.  According to Puriel, they are everywhere from Costa Rica to Ghana to South Korea, just to name a few.  Regardless of the location a student chooses, most will agree that it’s well worth it.

Jason Offutt, a Journalism and Mass Communications professor at Northwest, taught a one-month Travel Writing class in London in May 2013.

“It was fascinating being immersed in another culture,” Offutt says about the experience of living, of doing everyday things such as grocery shopping, halfway across the world.

The class spent a typical day experiencing the city of London, learning how to use

the senses to take in their surroundings and write about it.

“It was a travel writing class, so there was some classroom activity, but it was mostly using the city as a classroom,” Offutt explains. “Travel writing is observation -- not just the weather, but sights, sounds, and taste.”

The best way to truly learn about a city is to go beyond the well-known tourist attractions, to glimpse one-of-a-kind locales.

“We visited not just tourist spots but other venues, such as Abbey Road, George Orwell’s house, things that we would have read about back home,” Offutt says.  The group also toured Stonehenge, the Roman Ruins, and the city of Bath.

Offutt recalls one time, when the rest of the group took a short trip to Scotland, he stayed behind and took the tube to Burra, another area of London.

“It’s amazing how different two sections of a city can be,” Offutt recalls. “Where we stayed, and all the spots we associate with London – everyone was quiet, polite, everything you imagine British people to be.” Burra was a sharp contrast.

“There was yelling, graffiti, men New York Yankees hats in drinking beer in a church garden at 2:00pm,” he says.

Offutt explains that while it is common all over town to drink a beer in the early afternoon, such as with lunch, overall it doesn’t seem to cause problems.  In fact, the only place they noticed a rowdy drunken crowd was at Wimbly Stadium, during a soccer (called football in Europe) championship game.  The league was the UEFA, or Union of European Football Associations.

They also had the opportunity to interact, to some degree, with locals.

“We got to chat with people at the pub, which was fun, and three times, I had people stop and ask me for directions,” Offutt says.

Offutt had taken time before the trip to research the dress style of a typical English person – earth tones, dark blues, and grays, he explains.  Many of the students, meanwhile, wore neon colors and stood out more.

Even so, the experience of studying abroad, immersing oneself in a different culture, is like no other, and the best way to learn about the world.