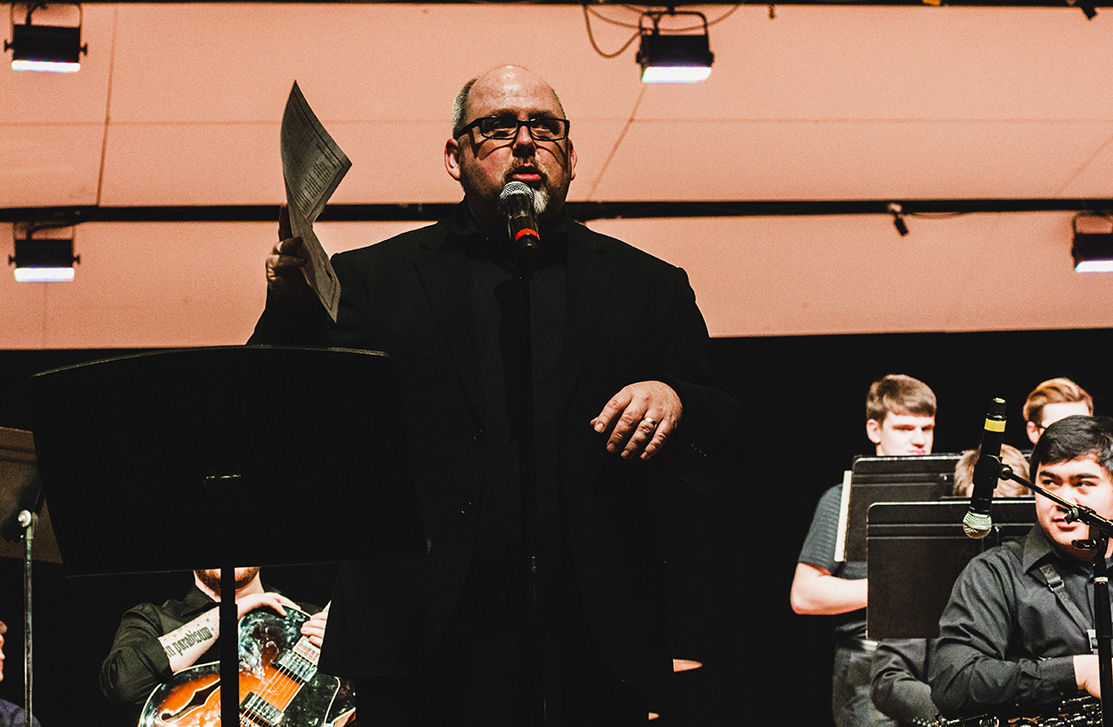 William S. Richardson, director of the Northwest Jazz Ensemble and Northwest Studio Jazz Ensemble, introduced the bands and gave context and information about the composers Feb. 10. 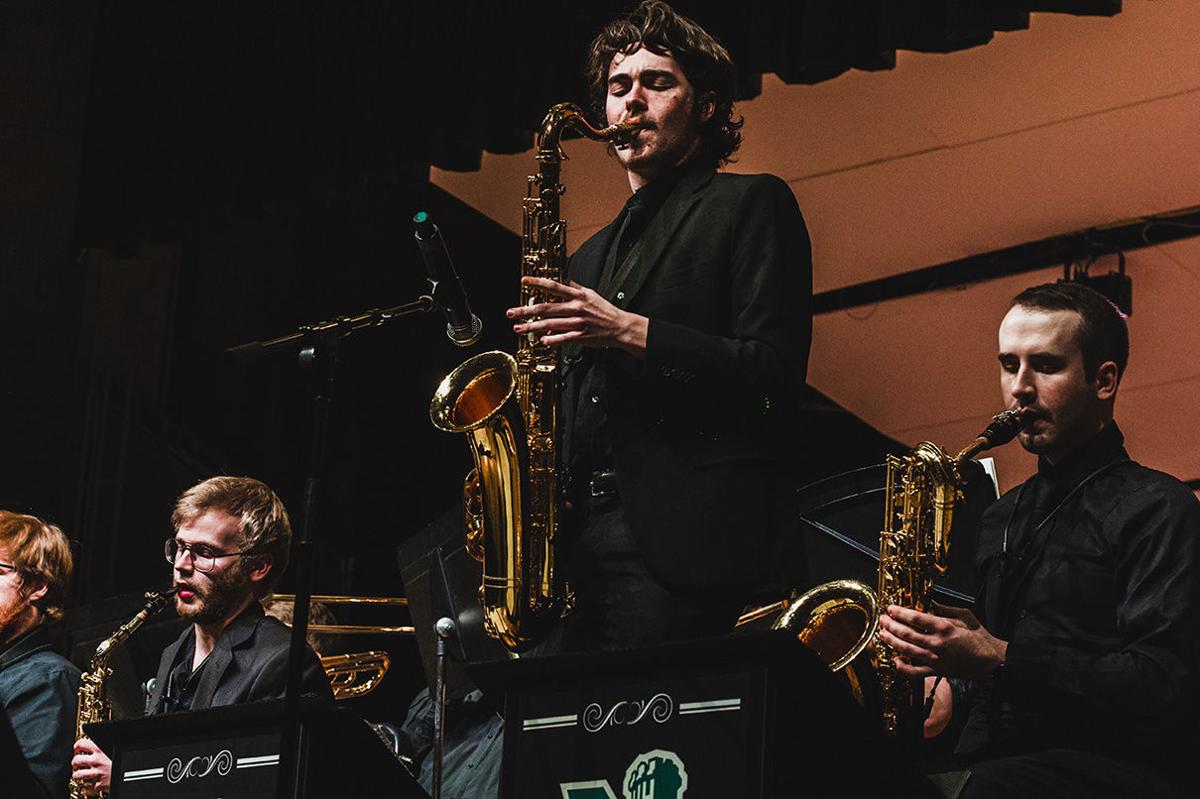 The ensemble is composed of "players that want to play." The concert accentuated various students' talents with intermittent solos throughout each song. 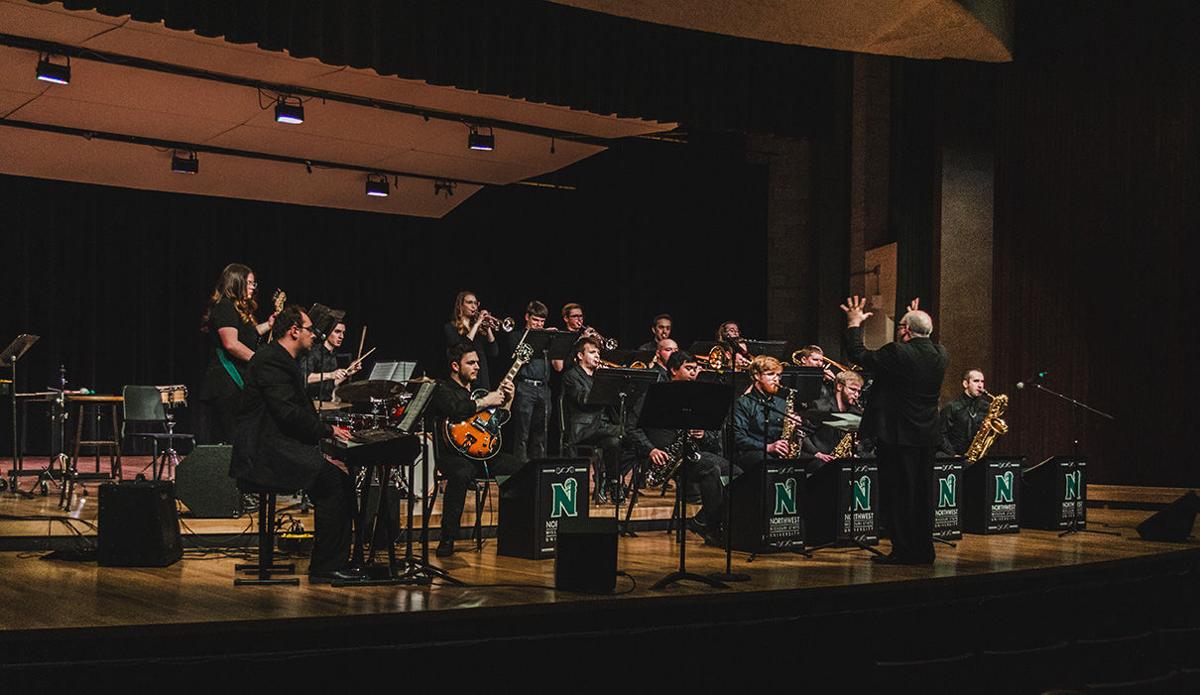 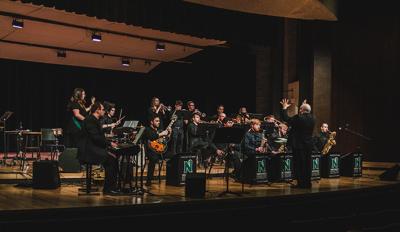 William S. Richardson, director of the Northwest Jazz Ensemble and Northwest Studio Jazz Ensemble, introduced the bands and gave context and information about the composers Feb. 10.

About 20 instrumentalists dressed in all black waltzed onto the stage Feb. 10 at the start of the Northwest Jazz Ensembles Concert in the Charles Johnson Theater. Shortly after, an additional gentleman clad entirely in black, complete with a crisp, jet black suit jacket, joined them on stage, welcomed by applause from the band and the audience.

That gentleman was Fine and Performing Arts Assistant Department Chair William Richardson, the director of the Northwest Jazz Ensemble and Northwest Studio Jazz Ensemble. Richardson entered in likely the same way he has since he first directed the jazz group back in 1999, 21 years ago.

“I think the steady stream of personnel for the second band, the Studio Jazz Band, that’s something that’s kind of new, and it’s healthy — the music program, the instrumental area, is just healthy,” Richardson said. “We got a lot of players that want to play.”

Senior Nicholas Foster, an alto saxophone player, with four years of experience performing for the Jazz Ensemble, not comparable to Richardson’s 21 years, but as extensive as nearly possible for any member in the band, also spoke about the progress of the ensemble’s growth.

“The group has gotten much better over the last four years,” Foster said. “When I came in, it was already a really strong program, but we also had a lot of really good senior players that were graduating, and once they left, it definitely kind of lowered the sound quality of the band a little bit. But we got really good people right back in there, filled their spots and got it sounding great again.”

The bands have been learning these songs since the start of the semester but had to adapt to diminished rehearsal times. Multiple rehearsals were canceled due to Martin Luther King Jr. Day and conflicts such as the Missouri Music Educators Association Conference, something that caused similar havoc for other components of the music department,like the Northwest Pep Band.

The song selection was doable even within the short time frame, something senior trumpet players Brandon Sconce and Kim Shriver commended Richardson for. They said it was a good mixture of both challenging and simple songs, but that Richardson had chosen songs they could definitely learn within the time period, something he was “usually good about doing.”

Sconce and Shriver said rehearsing the songs is the best part. What makes preparation so enjoyable is the people involved, both Richardson and the band members, Sconce said.

“The prepping part (is my favorite). You just get to play with the people you know. It’s just a lot of fun overall,” Sconce said. “It’s a relaxing experience almost, just the environment that he’s (Richardson) built, especially when you get to play something fun. ... He’s the kind of chill that you know that he knows what he’s doing, and we know we know what we’re doing, so it all works out.”

“Fun” was a word commonly used to describe the variety of energetic songs performed at the concert. Songs were from all over and of all different styles, such as “South Beach” by Howard Rowe, which was tribute to Miami, “Ornithology” by renowned Kansas City jazz saxophonist Charlie Parker and “Go East, Young Man,” Richardson’s favorite, by trombonist Slide Hampton, who actually performed as a guest artist at the Northwest Jazz Festival in 2000.

“It’s a lot of fun. Generally people leave snapping their fingers or whistling a tune,” Richardson said. “So our students work really hard, they do a good job, and they deserve an audience.”