You have permission to edit this article.
Edit
Home
News
Sports
Opinion
Arts and Entertainment
KNWT8
Tower Yearbook
Heartland View
Advertising
About Us
Subscribe
1 of 5 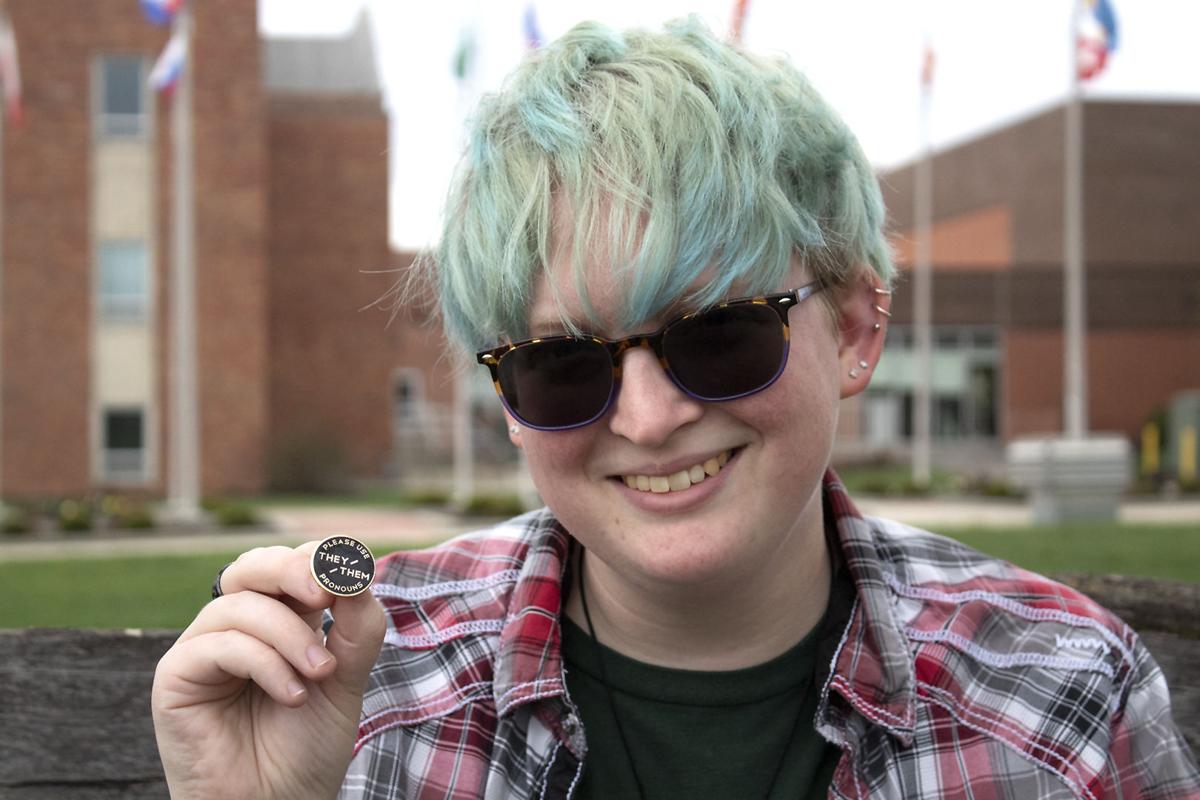 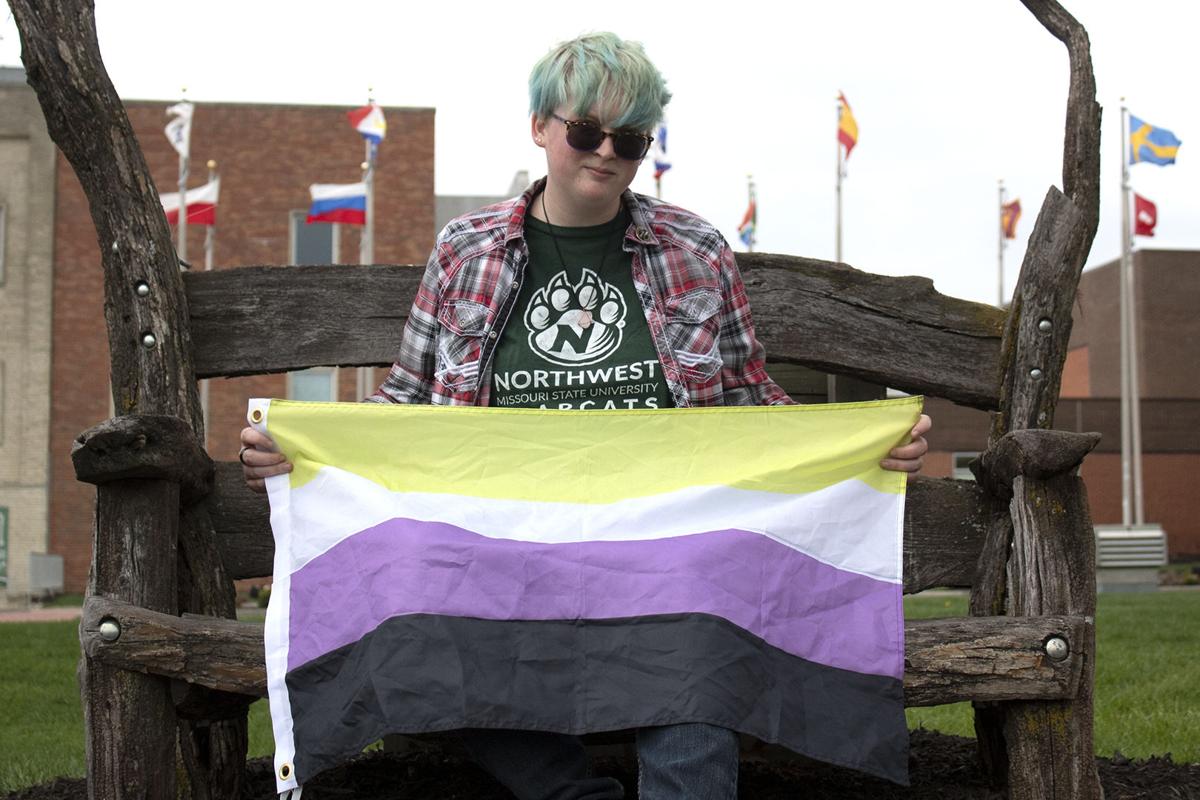 Courtaway also shows the non-binary flag which includes yellow at the top, then white, purple and lastly black at the bottom. 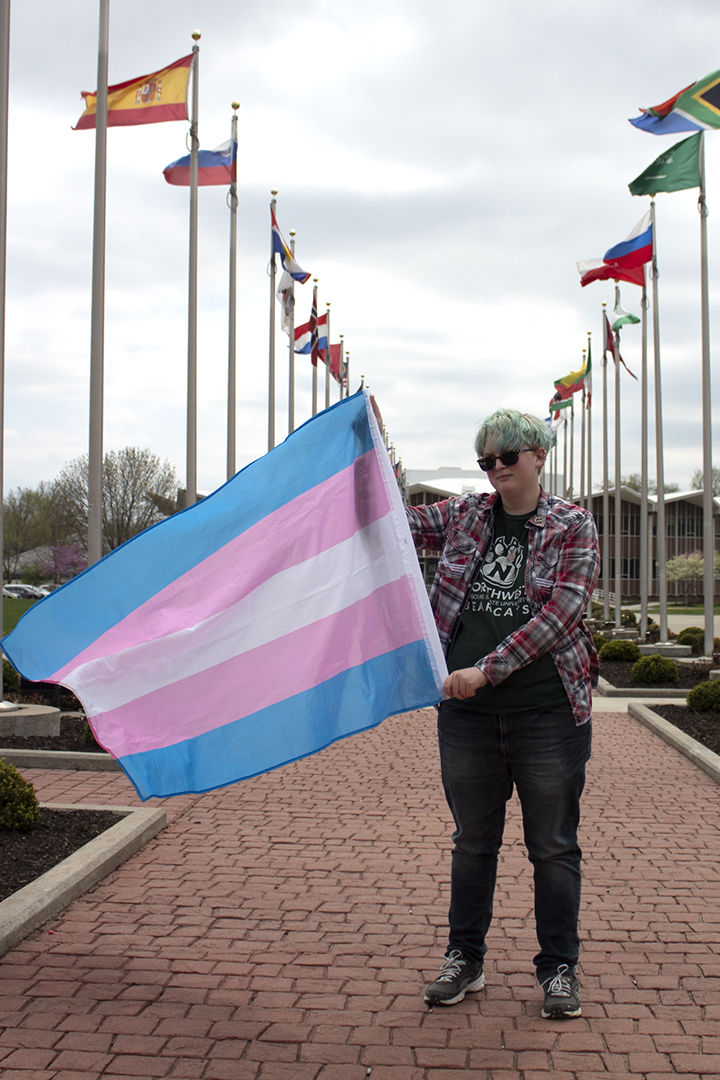 Courtaway holds up the flag that represents transgender individuals. The colors include from top to bottom; blue, pink, white, pink, blue. 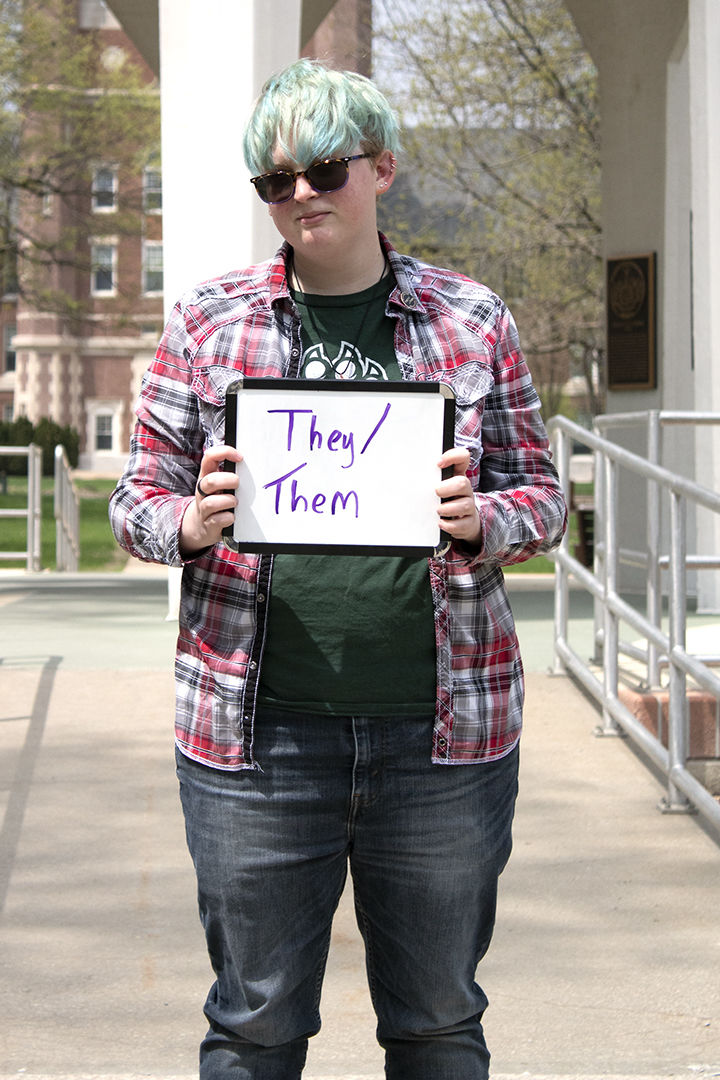 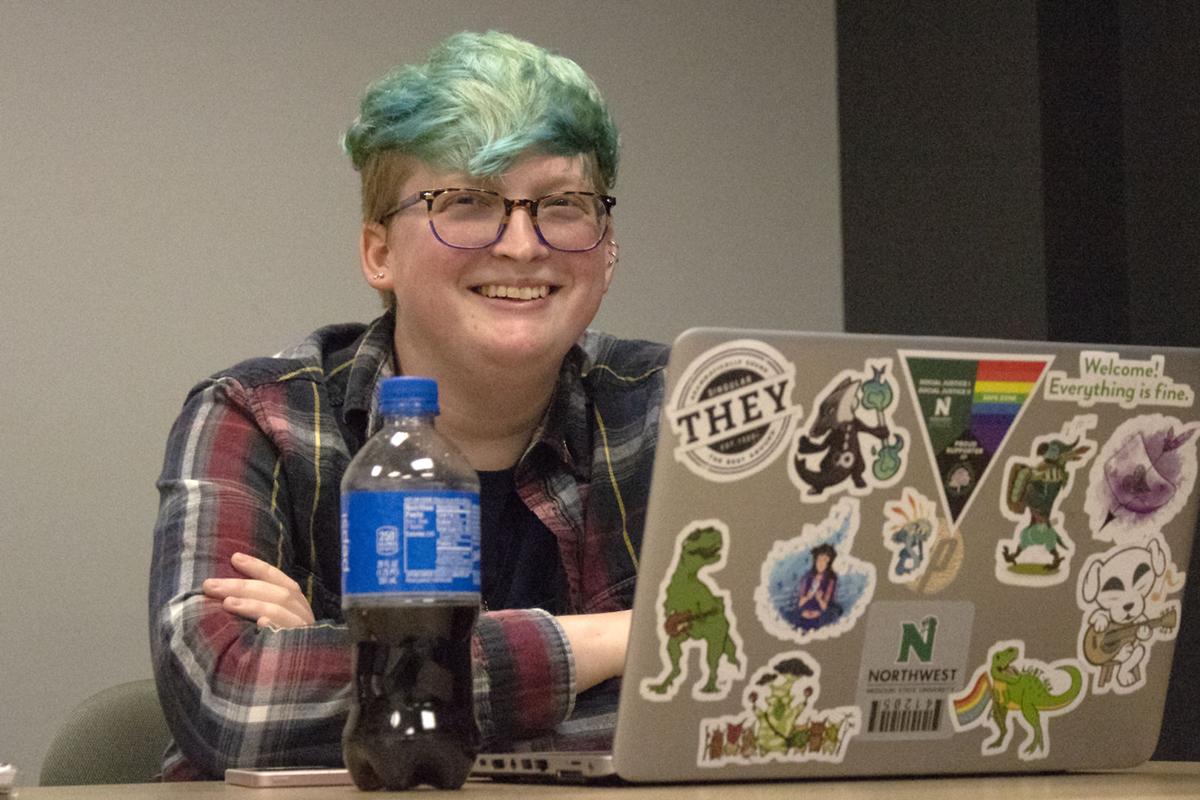 Courtaway is involved with the HERO organization on campus. They participate in any activities that the organization does, including fundraising.

Courtaway also shows the non-binary flag which includes yellow at the top, then white, purple and lastly black at the bottom.

Courtaway holds up the flag that represents transgender individuals. The colors include from top to bottom; blue, pink, white, pink, blue.

They had previously only used their gender neutral name privately with close friends, but upon noticing a spot for preferred name and pronouns on the Northwest application for new students, they made their decision on a whim to come out.

From the Missouri Academy of Science, Mathematics and Computing to a nontraditional student, senior Tric Courtaway, 25, has experienced life through a perspective not many people know or even try to understand.

At a glance, Courtaway is easy to spot with their distinctly blue hair, nonchalant gait with their hands in their pockets and non-formfitting clothes - most likely blue jeans, sneakers and a plaid button up with a T-shirt underneath.

As they get closer, a proud, informative “They/them” pin can be seen on the collar of their plaid shirt.

While coming out on campus for them was spontaneous, telling their parents about their identity was another hurdle they had to overcome.

Courtaway waited to tell them until they were confident enough to handle any backlash. Once they told them, it all came down to reminding and re-explaining everything.

While they did not get disowned like many LGBTQ people tend to face, Courtaway said they wish their family would try to understand more about their identity.

They do love that their family is supportive enough to help pay for some of their living expenses though.

When it comes to addressing them by their proper pronoun, they don’t mind a few slip-ups as long as there is effort shown.

Courtaway began questioning their gender and sexuality between their gap years, and with the help of a friend, they were able to piece together their sexual and gender orientation.

“I actually have a friend who I’ve known since the Academy, and we pretty much learned about our identities in lockstep with each other,” Courtaway said. “We started questioning our orientations around the same time, had many, many conversations on that note and later started talking about gender together too.”

For Courtaway, they said that having someone they trusted to discuss these things with was incredibly important as it can be difficult to test out ideas that have a lot of stigma attached to them.

With their gender pronouns being uncommon, Courtaway said it took a bit of questioning before they finally realized what they identified with most out of a vast number of identities to choose from.

“What makes you feel like a woman, if you do?” Courtaway said. “When you think of women or you think of men, there’s kind of a general idea of behaviors, demeanor, traits that roughly fit these ideas, and these categories work reasonably well for most people. For myself, I think of these two categories and I can’t really see myself being a part of either.”

Courtaway said gender identity is all about personal comfort.

During their gap years, they also experienced many other changes beyond learning their gender identity.

In the years following graduation from Missouri Academy with an associate’s degree, they didn’t quite end up where they originally thought.

While they had attempted to follow the traditional route of heading straight into college, the issue many stumble upon while in school came up: paying for their education.

Even though life took a different path, Courtaway doesn’t regret those gap years. Despite being away from school for more than six years, they said they were able to learn more about themselves and gain a lot of different experiences.

Courtaway got married for a couple of years before eventually separating under good terms, found a job working with dogs at a boarding and daycare business and was able to experience weekly mic nights on Tuesdays at their hometown pub, The Wolf, where they listened to musicians of varying levels.

“I definitely think they (the gap years) contributed to me being well-rounded in general, which will make me look more valuable to grad schools when I apply, as well as a lot of it, the dog stuff, the open mic, being good experiences to have,” Courtaway said. “And given the nature of my upbringing, that weird chain of events pretty much had to happen for me to learn about my gender and orientation.”

Along with those gap years came a small dose of wisdom through life lessons.

Associate professor Brian Haile knew Courtaway back in their Academy days, and he said he sees how those gap years have changed them.

“(They were) much younger and much more immature then,” Haile said. “Now (they’re) older, kind of been hit with some of life’s hard knocks. They’ve kind of had to mature quickly. To me, they’re still pretty young but not as young. The big thing is the maturity and still trying to find their place but knowing more about themselves.”

Courtaway even admitted that without those years between, they may not have joined Helping Everyone Regardless of Orientation, the LGBTQ organization on campus. They enjoy the instant kinship everybody has and have found lasting connections there.

They attend HERO meetings every week unless something important comes up.

Freshman Noah Wolfe met Courtaway at a HERO meeting, and while they slowly became better friends, Wolfe said they really got to know each other when they invited him to a Gregory Alan Isakov concert.

To most people, Courtaway is a calm and somewhat reserved person, but to their friends, they understand the shyness is from them analyzing everything and taking it all in.

“When I first met them, I got the impression that they were a very kind and gentle soul, and I still absolutely believe that,” Wolfe said. “Now I just see a little bit more of the chaotic side. … You absolutely should expect it from a person with blue hair and multiple ear piercings, but like seeing Tric, you just don’t.”

Junior Starr McClain said they feel like there are a lot people who can learn from Courtaway about simply being a friend.

“Even if it’s not something that they agree with or they can’t see the passion with, seeing the passion within someone else is enough to support them for it,” McClain said. “That’s something I really, really love about Tric.”

For McClain, Courtaway has been a great supporter and close friend for them, especially last year when they needed help packing while they had the flu and when their family had disowned them.

“Over these past two years, Tric has kind of become one of my biggest friends and supporters, and they have helped me so much,” McClain said. “Just them being them is amazing.”

Courtaway does their best to help everybody, especially during hard times, whether that be through sharing and boosting GoFundMe’s or asking people how they’re doing over Starbucks.

“They (Tric) offered to help when my car needed to be fixed and ended up paying for about half of it,” Wolfe said. “They’ve continually let me know if I need anything they’re there for me, which is awesome and really reassuring since it’s hard not to feel alone when this kind of thing happens. My blood family disowned me, but I had already built a chosen family here, with Tric as a part of that.”

Through experience, patience and kindness, Courtaway has found a home at Northwest. While life didn’t always go the way they planned it, they learned to go with the flow and enjoy the journey.

“Life’s an adventure,” Courtaway said. “Things don’t always take the path that you expect or what society tells you is the norm. It doesn’t always go that way, and it’s always good to question that and deal with what works for yourself. Even if it doesn’t look like the standard thing, it will work out eventually.”