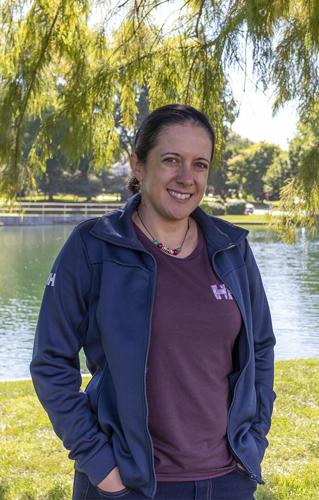 Northwest Assistant Professor Nina Adanin stands in front of Colden Pond. This is Adanin’s second year at Northwest in the Health Science and Wellness department. 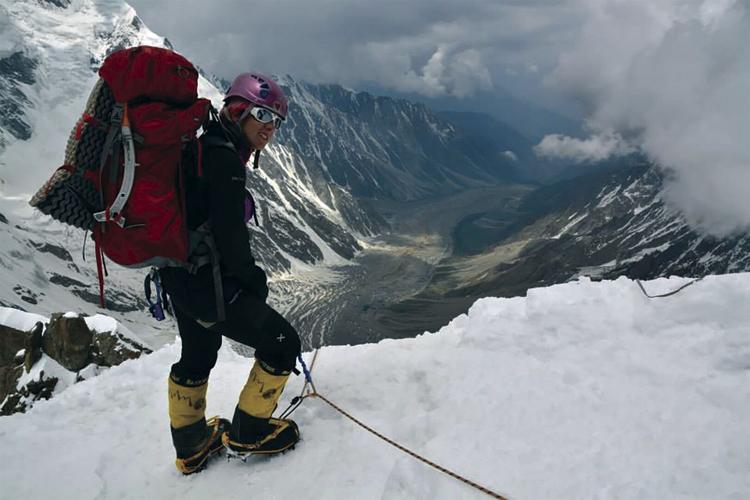 Assistant Professor Nina Adanin stands on the Svalbard Islands after marching 300 miles on skis. Adanin has traveled across the globe, experiencing many things that you would think were only in movies.

Northwest Assistant Professor Nina Adanin stands in front of Colden Pond. This is Adanin’s second year at Northwest in the Health Science and Wellness department.

Assistant Professor Nina Adanin stands on the Svalbard Islands after marching 300 miles on skis. Adanin has traveled across the globe, experiencing many things that you would think were only in movies.

While her desk sits in Martindale Hall, Assistant Professor Nina Adanin has traveled and ventured all across the globe, from the heights of the Himalayan Mountains, the scorching Middle East, the majestic Atlantic Ocean, the freezing Arctic and the humid Colombian jungles.

Adanin was born in Germany and grew up with her grandparents on a farm in the mountains of Bosnia, and when the Yugoslav Wars began with the breakup of Yugoslavia, they moved to neighboring Serbia.

Adanin studied sports management at the University of Belgrade, the largest and oldest modern university in Serbia. After growing up in the mountains, mountain climbing came next.

“After I finished my undergrad in sports management, I wanted to travel, like every young person on this planet,” Adanin said. “So, I started to climb a lot, because with the climbing, I could travel and explore new regions and meet new people.”

Adanin wanted to climb Mt. Everest, but as a college student, couldn’t afford the expensive equipment. She was offered a job as a guide in the Himalayan Mountains for climbers and even got to climb Everest itself, but she didn’t reach the top due to weather. However, she was still high enough to see the Earth’s curvature.

“When you’re hungry and you’re so cold, you just want to go down,” Adanin said. “It’s beautiful, to be honest, it’s so beautiful.”

In 2013, Adanin went on an expedition to climb one of the highest mountains in Pakistan, Nanga Parbat. She traveled with a team of 17 other climbers and two local guides.

“I wanted to climb because I love history. I like stories, and I joined an international expedition, so I wasn’t the guide on that,” Adanin said. “It was a real expedition, so everyone needed to have a role.”

One night in the mountains, the Taliban arrived and executed half of the team.

“They took my money, took my passport, they took everything,” Adanin said. “No idea why, no idea who, they just came one night.”

Adanin and the other half of the expedition were only able to survive because they were further away from camp and were able to hide, while the other half had stayed to prepare. The next day, rescue helicopters came and flew the survivors home.

“We are professional athletes. We are climbers. We are not politicians,” Adanin said. “It’s not the way a professional climber or a mountaineer is supposed to finish life.”

After climbing many mountains and almost falling victim to the Taliban, Adanin felt like exploring something else. Along with three others, she crossed the Atlantic Ocean in a sailboat for five weeks in 2015. They sailed from Gibraltar, just off the southern Spanish coast and landed in the Caribbean Islands, the same route Christopher Colombus and his men sailed on their expedition to the new world. Their only stop along the way was on the Spanish Canary Islands west of Africa to stock up on inventory before sailing the open ocean.

“I didn’t have much experience with sailing, but because I’m a climber, I know how to use the ropes,” Adanin said. “I know what it is to be patient and to suffer. And I suffered a lot with seasickness. A bucket was my best friend.”

For the first couple of weeks, they had fruits and canned goods to eat, and they would catch their food as well, cooking and frying fish they caught. In the middle of the Atlantic, Adanin recalls seeing large amounts of garbage floating around.

Off the coast of Morocco, a speedboat was sighted on the radar by the captain. They were approaching fast, and Adanin said that meant they were about to be robbed by pirates. They changed course and were able to avoid them. In the five weeks, they came across pirates twice, but were luckily able to slip away.

When they finally reached the Caribbean, Adanin recalled not seeing land, but smelling it first.

“What I found was a smell, it stayed for three seconds,” Adanin said. “The smell of land. There is something specific, and I never felt that. That ground, grass, it’s way different than the smell of fresh grass.”

Adanin recalled feeling drunk when walking on land for the first time in a month without the waves rocking their sailboat.

“After a few minutes, you’re like ‘OK, I’m OK. Let’s go have good pizza,’” Adanin said. “It was a great experience, and maybe one day I’ll cross the Pacific.”

Adanin later climbed Denali, previously named Mt. McKinley, located in Alaska, it’s the tallest mountain in North America. From there, Adanin visited some friends in Colorado and New York. Adanin wanted to finish graduate school and get her masters and PhD. She was offered a scholarship and a student job at Ohio University in 2016 and received her masters in outdoor and recreation.

“I love people in the U.S. They’re super friendly, super nice and welcoming,” Adanin said. “I was like, ‘Wow, this is not what we learned before in the books, I want to be here.’”

In the spring of 2021, Adanin and three female colleagues marched 300 miles on skis, pulling research equipment for 35 days in the Arctic. They were on the Svalbard Islands, which lie halfway between mainland Norway and the North Pole. They were there to collect black carbon in snow and compare it to years prior to see if pollution might be decreasing, which is why they opted to march and use skis instead of polluting snowmobiles. They hiked along a trail that has been used on the islands for a century, but has terraformed as glaciers melt. Luckily, they were still safe from polar bears.

“It was really cold. It was dangerous. But it was the trip of my life and the expedition of my life,” Adanin said.

Last winter, Adanin and a team of scientists traveled to Colombia to study some of the world’s last tropical glaciers.

“It’s amazing, but it’s so sad to see all the glaciers that are disappearing,” Adanin said. “They will be gone in a few years, and that will impact society around people.”

The team climbed the Colombian Mountains for research, and on one occasion, the volcano they were climbing erupted. They recorded some of the footage and took some quick measurements for scientific purposes before making a safe escape.

“That sound. I never had that experience,” Adanin said.

After her expedition in the Arctic, Adanin applied to several schools for a teaching job, and Northwest reached out to hire her.

“The point is, it’s not where you are, it’s who you are with. I think all my colleagues are the best on the planet,” Adanin said. “Super nice, super supportive. They helped me last year to go into a super fast transition to teach four classes here. They made me part of this family.”