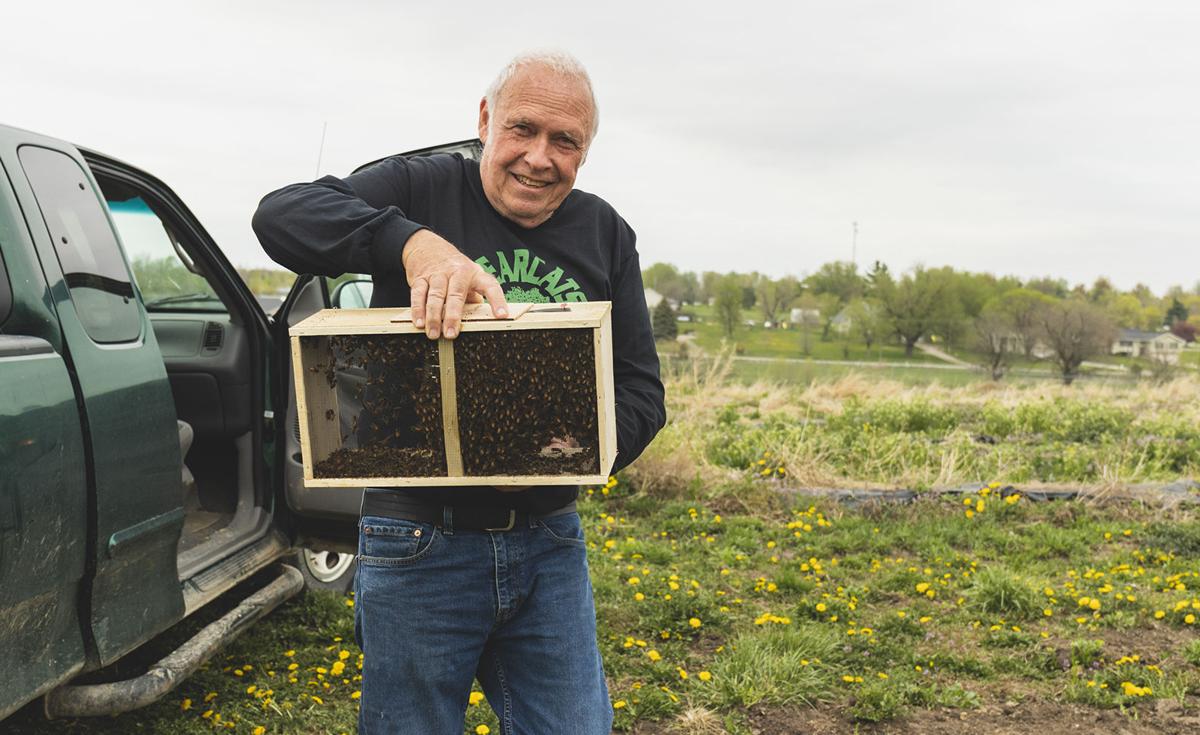 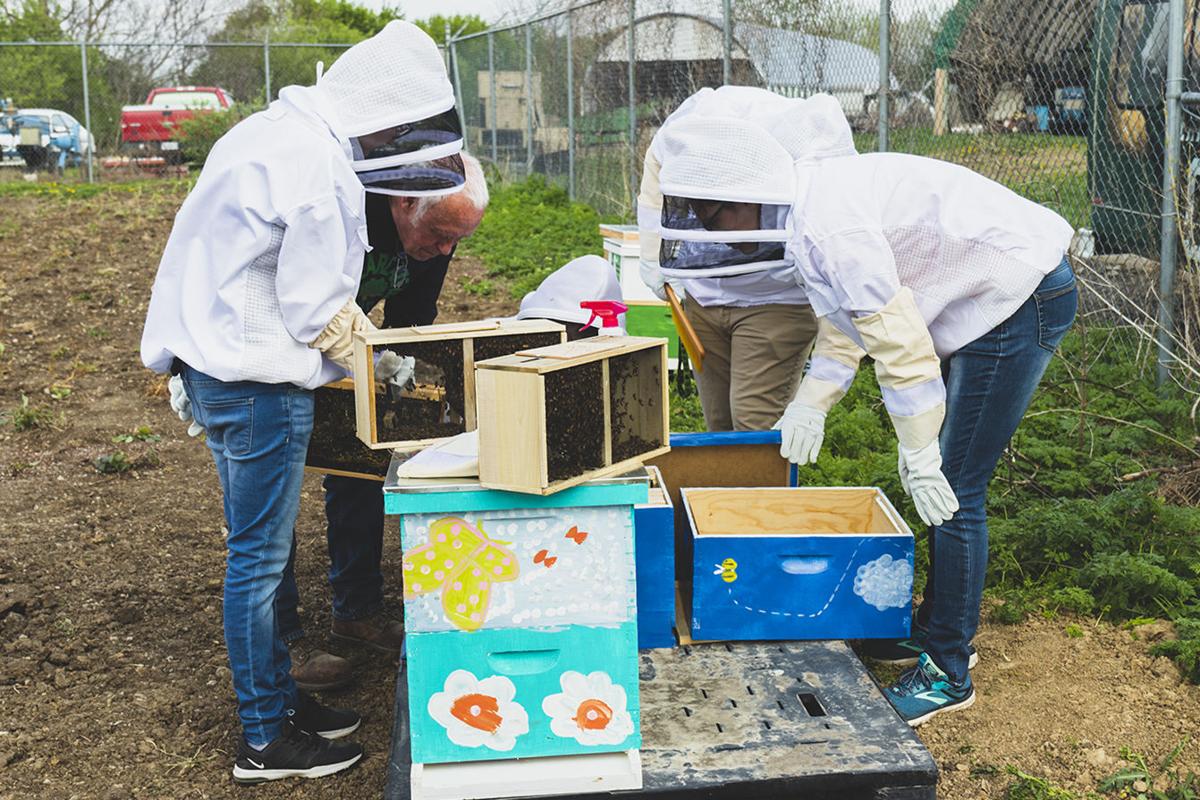 Over the course of a 10-month span, the Northwest Beekeeping Club has lost 50% of its bee hives.

In April the Beekeeping Club purchased 12 pounds of bees, enough for four hives, each suited with a queen bee, respectively. The bees were doing well — producing 80 pounds of honey, enough to give to the Board of Regents and other organizations; the blueberry bushes on the back end of campus were loaded with blueberries after years of hardly producing — until one day in the late fall when the bees weren’t doing so well anymore.

The four hand-painted hives on the edges of the University Pellet Plant, where just days ago the bees were abuzz, had a deadout. All of the sudden, dead bees were scattered around one of the hives. The Beekeeping Club had lost its first hive, dropping the hive count down to three. It wouldn’t be long until the club would lose another hive.

Pat Ward, the Beekeeping Club adviser and Arboretum director, sent the dead bees off to be tested by experts. The experts' results were inconclusive. They didn’t know why the bees died. All they knew was what didn’t happen. The bees didn’t die from parasites, deformed wing disease or any other virus.

“It was one of our stronger hives,” Ward said. “It was like mass sucicide. I don’t know what happened. The experts couldn’t tell us.”

Further along into the fall, the Beekeeping Club lost its second hive.

This time though, there were no dead bees scattered across the ground. There were no bees at all.

“Bees can all of the sudden decide ‘This isn’t my favorite place; we’re going to go live someplace else,’ and poof, out the door they go,” Ward said.

“To start with I thought we were in a super situation,” Ward said of the Beekeeping Club. “The bees were doing just fine. And then all of the sudden we lost two hives.”

Beekeeping Club President sophomore Abigail Rosonke said the bees they received last April didn’t know how to survive the winter, which, in some ways, has led to the 50% loss. The bees were supposed to be shipped from North Carolina, which experiences mild winters, but were instead found to be shipped from Georgia, which doesn’t experience winter like the Midwest.

The inconsistent winter weather patterns in the Midwest is harsh on the bees, Rosonke said.

“One day it’s negative nine degrees, and the next it’s 45 degrees,” Rosonke said. “Not only are your bees going through this whole adjustment period to get ready for winter, but all the sudden they think it’s spring. They’re out looking for flowers and there aren’t any because it’s January.”

The turn from winter to spring last year came sooner than usual, Rosonke said. She’s worried if this pattern repeats itself, the bees on campus will come out of their hives before any flowers have had the chance to grow. The bees will return from searching for food with nothing but wasted energy, forcing the Beekeeping Club to feed the bees more than usual.

In central Illinois, 310 miles one-way from campus, sits the 50 acres that Ward calls home for four nights a week. There, Ward has also lost bees. He started beekeeping 20 years ago when he said it was easy. There were no Varroa mites to worry about then. Ward’s beehives eventually died out and he didn’t get any more until recently, four years ago.

Ward was up to keeping six beehives, two of which were wild swarms that he caught. The rest were purchased for $150 per hive. He lost one hive earlier on in the year.

According to the Bee Informed Partnership survey released in June 2019, last winter saw the largest beehive loss since the partnership started its annual survey 13 years ago.

Ward started working part-time for the University three years ago. He didn’t plan on staying long, he really came just to help out. He was drawn in by the Arboretum. But three years later, he still spends three nights a week sleeping in North Complex.

He said his wife, Barb, of 28 years, who notices everything, sometimes misses him.

“To some extent, it’s nice because she misses me when I come back,” Ward said.

About a month ago Ward and his wife got a dog. Ward was hesitant at first to agree to a dog because it would scare off the wildlife, but more specifically, the deer he feeds from standing just a few feet away.

But sure enough, the two filled out adoption paperwork at the pound. After completing required paperwork, the pound told them it would call in a couple of days after determining if the two were fit to house a dog. Ward chuckled to himself, recounting raising racoons, foxes, owls and deer from his house secluded on 50 acres. Before the two even drove half a city block, they received a call from the pound and turned around to pick up the dog they had adopted. Ward thought it was going to be a golden retriever, but it turned out to be a mut.

Ward brings the knowledge he gains from his personal hives in central Illinois along with him back to campus on that 310 mile drive, where he chips away the time counting birds he sees flying near the highway. The most he’s counted is 57. On his way to campus this week, he saw a couple of bald eagles. He listens to the NPR station and sometimes the Willie Nelson radio.

When Ward gets back to Maryville, he has to help care for what’s left of a once thriving bee population.

To keep the standing two hives alive for the duration of the remaining winter with no natural food source, the Beekeeping Club feeds them a sugar water solution and pollen patties. The club checks on the bees about three times a month in the winter and once a week during the busy season, the warmer months.

The Beekeeping Club is planning to add two hives of Russian bees, imported from Lousianna, in March. Russian bees are used to colder temperatures and will expectedly survive at higher rates than the caucasion bumblebee, which the club has two remaining hives of.

Ward said the Russian bees are known for being a little more aggressive, which will be an adjustment for the Beekeeping Club that has only worked will the cool-tempered caucasion bumblebee. The two hives of Russian bees will be kept at the R.T. Wright Farm.

According to the Honeybee Coalition, honeybees pollinate 1 in 3 consumed bites on average.

“A large part of what we eat comes from pollination by insects ,and so maybe we need to start taking care of our bees better,” Ward said. “That’s one of the reasons for the Beekeeping Club.”